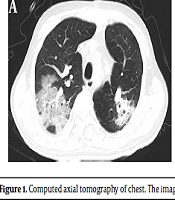 Mycobacterium mucogenicum belongs to the rapidly growing mycobacteria, and it is a rare conditional pathogen. Although recent studies suggested that the incidence of M. mucogenicum infection was increased worldwide, there are no case reports of M. mucogenicum and Klebsiella pneumoniae pulmonary infection.

A 32-year-old non-smoking male was diagnosed with congenital atrial septal defect and pulmonary arterial hypertension. After cardiac surgery, lung infections were observed in the patient and then rapidly developed acute respiratory distress syndrome. The cefoperazone-sulbactam, vancomycin, ceftazidime, carbapenem, tigecycline, and micafungin were used for the treatment of pulmonary infection but did not work well. Ultimately, M. mucogenicum and K. pneumoniae were identified as pathogens by using next-generation sequencing. The patient was treated successfully with the administration of clarithromycin, linezolid, tigecycline, and ceftazidime-avibactam. The clinical outcome of this patient was favorable without relapse of infection.

This case demonstrates that M. mucogenicum pulmonary infection may result in severe outcomes. The next-generation sequencing technology is important for the identification of M. mucogenicum. Additionally, the clinicians and clinical pharmacists should remain awareness in dealing with M. mucogenicum infection to avoid delaying appropriate treatment.

A 32-year-old non-smoking male patient was diagnosed with congenital atrial septal defect and severe pulmonary arterial hypertension for decades. The patient underwent cardiac surgery in the Affiliated Hospital of Guizhou Medical University. The initial hospital course of the patient was uneventful. Physical examination showed that the patient’s temperature was 36.6°C, heart rate (HR) was 74 beats/min, and blood pressure (BP) was 122/70 mmHg. Laboratory evaluation revealed the following findings: White blood cells (WBC) count was 9.96 × 109/L (93.20%, neutrophils), procalcitonin (PCT) was 1.46 ng/mL, and c-reactive protein (CRP) was greater than 20 mg/L on postoperative day 1 (POD 1). Clinicians and the clinical pharmacist thought that the increased WBC count, PCT, and CRP were resulted from cardiac surgery that might induce stress reaction. Cefuroxime (3.0 g/d, intravenous drip) was used to prevent infection. Although the ventricular premature beat was observed on POD 6, the patient’s medical conditions were well controlled. On POD 12, cough, blood in sputum, and fever (38.4°C) were observed in the patient.

The patient was readmitted to ICU on POD 33 for dyspnea with decreasing SPO2. Considering that the pulmonary infection might be caused by other Gram-positive bacilli and (or) fungal infections, an antibiotic regimen consisting of ceftazidime-avibactam (7.5 g/d, intravenous drip), vancomycin (2.0 g/d, intravenous drip), and micafungin (400 mg/d, intravenous drip) was added. Unfortunately, the patient developed acute kidney failure (urinary volume: 1300 mL; Urea: 14.59 mM; creatinine: 126.0 μM) on POD 37. We believed that acute kidney failure might result from the adverse drug reaction of vancomycin and (or) sepsis. Therefore, we discontinued using vancomycin and began continuous renal replacement therapy (CRRT) for this patient.

On POD 39, the bronchoscopies with bronchoalveolar lavage were performed on the patient. Further, the identification of the pathogen in bronchoalveolar lavage fluid was performed by next-generation sequencing (PMSEQ, Beijing Genomics Institute). The sequencing result identified that M. mucogenicum and K. pneumoniae were the potential pathogens in bronchoalveolar lavage fluid. According to the previous studies, clarithromycin 0.25 g orally every 8 hours was administrated for a total of 32 days, together with linezolid 600 mg orally twice daily for 53 days. Additionally, tigecycline (100 mg/d, intravenous drip) and ceftazidime-avibactam (3.75 g/d, intravenous drip) were also used for the treatment of K. pneumoniae infection. Following these treatments, the medical condition of the patient substantially improved, the mechanical ventilation and CRRT were stopped on POD 50 and POD 59, respectively. There was no evidence of relapsed infection after discontinuation with antibiotics (see Figure 1B and C).

More than 100 species of RGM have been identified and traditionally classified into M. abscessus complex, M. chelonae, M. fortuitum complex, and M. mucogenicum. Mycobacterium mucogenicum, as one of the most common type of RGM, can produce mature colonies on culture media within 7 days. In the past years, M. mucogenicum was considered to be a conditional pathogen. However, recent studies demonstrated that the incidence of M. mucogenicum infection was increased worldwide, which might result from the progression of pathogen identification technology and sequence technology (5). In the present work, we firstly reported a new case of M. mucogenicum and K. pneumoniae pulmonary infection in a patient after cardiac surgery.

Mycobacterium mucogenicum was firstly misidentified as M. chelonae-like organism in 1982, but the result of 16S rRNA sequence indicated it was more closely to M. fortuitum in phylogenetically system. Finally, it was named M. mucogenicum due to the mucoid-like cell surface by which grew on solid media. The characteristic mucoid surface could promote the resistance of M. mucogenicum to chlorine in water and the ability to form biofilms, which might explain why M. mucogenicum mainly caused infection through contaminated materials, waters, and invasive operations (7, 8).

In the past, the pathogenic properties of M. mucogenicum was principally in immunocompromised hosts. However, increasing studies had identified that M. mucogenicum also could infect immunocompetent patients (6). Although there was no identifiable risk factor for pulmonary infection caused by RGM, the previous study indicated that there were several predisposing factors for environmental mycobacteria-related lung diseases, including structural lung diseases, decreased clearance of sputum, gastroesophageal reflux disease, endocrine or immune, prior lung infections, slender body habitus, and so on (9). The present patient is 1.55 meters tall and weighs 48 kilograms, which may promote the risk of M. mucogenicum infection. Additionally, the patient was diagnosed with congenital heart defect, pulmonary arterial hypertension, mitral regurgitation, and tricuspid regurgitation, which might also increase the risk of pulmonary infection. We believed that these host conditions might promote the risk of M. mucogenicum infection.

Once diagnose was determined, the appropriate antibiotics should be taken. The prolonged and combination antimicrobial treatment is the characteristic of M. mucogenicum management. Previous studies indicated that M. mucogenicum was susceptible to aminoglycosides, clarithromycin, quinolones, and trimethoprim-sulfamethoxazole (4, 10). However, the acute renal failure of the patient limited our choice. In consideration of the M. mucogenicum and K. pneumoniae infections, we decided to use clarithromycin, linezolid, tigecycline, and ceftazidime-avibactam. In addition, this antibiotic regimen has been used for more than four weeks and successfully treated the patient.

Mycobacterium mucogenicum may result in severe pulmonary infections, especially co-infection with other pathogens. Pathogen sequence technology is considered a gold standard for identifying M. mucogenicum. Additionally, clinicians and the clinical pharmacist should be aware of other possible copathogens in dealing with M. mucogenicum infection.