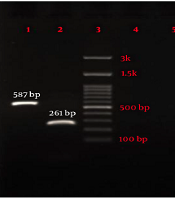 Carbapenems are the most commonly administered drugs for the treatment of multidrug-resistant Pseudomonas aeruginosa (MDR P. aeruginosa) infections. However, carbapenem-resistant P. aeruginosa is spreading rapidly and has led to a new threat to human health worldwide.

The current study aimed to determine the prevalence of imipenem-resistant P. aeruginosa, detect metallo-β-lactamase (MBL)-producer isolates, and evaluate their clonal relationships in strains isolated from patients referring to the hospitals of Ardabil city, Iran.

The prevalence of imipenem-resistant P. aeruginosa strains was estimated at 57.1% (48 out of 84 isolates). In addition, 45 (93.7%) out of 48 imipenem-resistant P. aeruginosa isolates were phenotypically screened as MBL-positive, among which 16 (35.5%) and three (6.6%) isolates harbored blaIMP and blaVIM-1 genes, respectively. However, blaNDM, blaSIM-2, blaSPM, and blaGIM-1 genes were not detected in this study. MBL-producing P. aeruginosa strains were divided into 42 ERIC-PCR types. Based on the results of MLST, P. aeruginosa ST235 was the only identified sequence type.

Our results revealed a high and alarming prevalence of imipenem-resistant and blaIMP-positive P. aeruginosa ST235 at Ardabil hospitals. Continuous monitoring is essential to control the further spread of this highly virulent and drug-resistant clone.

β-lactam antibiotics, including penicillins, cephalosporins, and carbapenems, are good choices for the treatment of many infectious diseases caused by clinically important Pseudomonas aeruginosa. This Gram-negative opportunistic pathogen is frequently found in hospital environments, particularly intensive care units, and patients that use devices such as ventilators and blood catheters (1-3). Today, the emergence of highly resistant P. aeruginosa, especially multidrug resistant (MDR) strains, which are associated with 13% of all hospital-acquired infections, is a global public health issue (4). The Infectious Diseases Society of America (IDSA) (2016) recommends dual empiric therapy for the treatment of MDR P. aeruginosa strains (4). However, there is also a notion that necessitates antibiotic selection based on the data of local resistance patterns (4).

Among different antibiotic resistance mechanisms in P. aeruginosa, e.g., efflux pumps, loss of porins, and production of β-lactamase enzymes (6), none has yet been investigated in clinical isolates of P. aeruginosa in Ardabil. Therefore, the current study aimed to perform phenotypic and genotypic screening for metallo-β-lactamase (MBL)-producing P. aeruginosa isolates. According to the Ambler classification scheme, four classes of β-lactamases are identified, including serine β-lactamases A, C, and D, and MBL (class B) (7). Serine β-lactamases A and D and MBL are able to hydrolyze carbapenems (carbapenemase) (8). The MBL-producing P. aeruginosa strains are associated with high morbidity and mortality rates because these organisms are resistant to all β-lactam antibiotics, except for monobactams (9). The most common MBL enzymes are Imipenemase (IMP), Verona Integrin-encoded MBL (VIM), New Delhi MBL (NDM), German Imipenemase (GIM), and Seoul Imipenemase (SIM). The MBL-coding genes are located on the plasmid and bacterial chromosomes and can disseminate among bacteria through highly mobile genetic elements (9). To impede the spread of imipenem-resistant isolates of P. aeruginosa, the investigation of the clonal relatedness of MBL-producing P. aeruginosa strains is of paramount importance.

A total of 84 clinical isolates of P. aeruginosa were used in the present study. Bacterial isolates were collected from different specimens of patients who were referred to Ardabil hospitals from June 2019 to February 2021. The collected isolates were confirmed by standard laboratory tests, including pigment production, Gram-staining, catalase, and oxidase, as well as species-specific PCR (10). Confirmed bacteria were tested to identify imipenem resistance and MBL-positive isolates using phenotypic and genotypic methods.

The Kirby-Bauer’s disk diffusion method was used to evaluate P. aeruginosa resistance to the imipenem antibiotic (10 μg, Padtan Teb, Iran). Imipenem-resistant isolates were tested by double-disk synergy test, including imipenem plus imipenem-ethylenediaminetetraacetic (IPM-EDTA) (10 μg/750 μg) (Cypress Diagnostics, Belgium) disks, for phenotypic screening of MBL-producing P. aeruginosa isolates. Briefly, a 0.5 McFarland turbidity standard (1.5 × 108 CFU/mL) of P. aeruginosa was prepared and spread on Mueller-Hinton Agar (Conda, Pronasida, Spain) as a lawn culture. Imipenem and IPM-EDTA disks were placed at a 20 mm distance from each other. A growth inhibition zone of ≥ 7 mm around the IPM-EDTA disk was considered as MBL-producing P. aeruginosa. Interpretation of disk diffusion results was done according to the Clinical and Laboratory Standards Institute (CLSI) guidelines 2018 (11). For the quality control of antimicrobial susceptibility testing disks, P. aeruginosa (ATCC 27853) standard strain was used.

Total genomic DNA of imipenem-resistant and MBL-producer P. aeruginosa isolates was extracted using the boiling method. The PCR details, including specific primer sequences and specific annealing temperatures are presented in Table 1, and used for the detection of MBL genes, including blaIMP, blaVIM-1, blaNDM, blaSIM-2, blaSPM, and blaGIM-1 genes. The PCR was carried out in a 25 μL volume. Each PCR mixture contained 20 μL of PCR master mix (Ampliqon, Denmark), 2 μL of primers (100 pmol, 1 µL), and 3 μL of genomic DNA. Amplified products were visualized through 1% agarose gel electrophoresis and confirmed by sequencing.

The GraphPad InStat statistical software (version 3) was used for data analysis. The Student's t-test and chi-square (χ2) were used to interpret the data. A p value of < 0.05 was considered statistically significant. 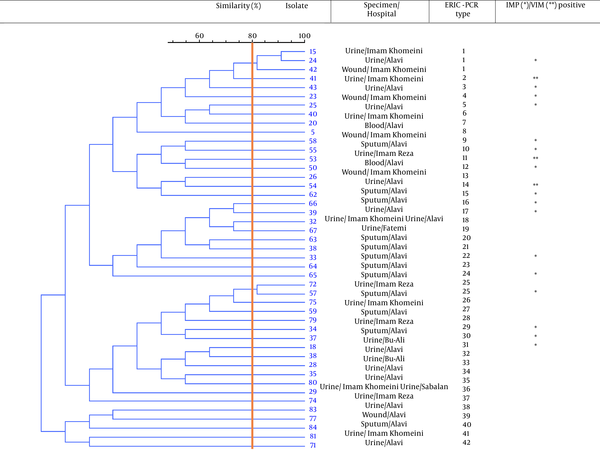 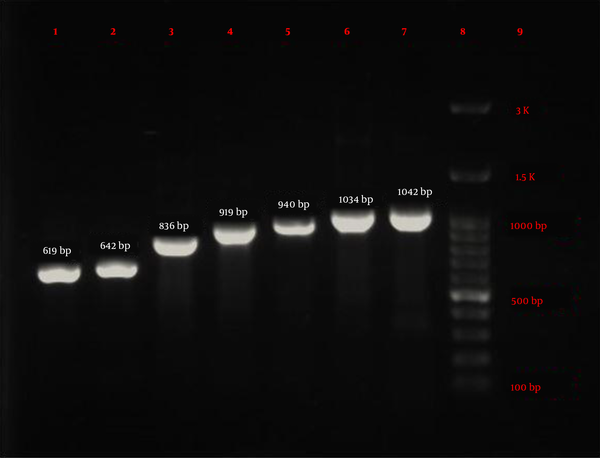 Antibiotic resistance is growing rapidly worldwide. Therefore, antimicrobial resistance surveillance programs are required, especially in developing countries such as Iran, to monitor and predict the trend of drug resistance and assess the overuse and misuse of antimicrobial agents and associated consequences (18). The emergence of imipenem-resistant P. aeruginosa strains is a concerning issue because these strains show simultaneous resistance to multiple antibiotics (19). In the present study, the prevalence of imipenem-resistant P. aeruginosa strains was 57.1%, which is higher than reports from Tabriz (49%), Ahvaz (42.9%), Urmia (30.8%), Zanjan (29.2%), Guilan (23.3%), Zahedan (17.2%), and Hamadan (7.5%) and lower than in Tehran (70.4%) (5). Carbapenem-resistant P. aeruginosa prevalence in other countries has been reported as follows: Pakistan 49.5%, Philippines 31.1%, Thailand 28.7%, Japan 28.5%, Singapore 23.3%, Korea 22%, and Romania and Greece > 45%, and the Netherlands, Germany, Austria, Belgium, Denmark, Finland, French, Iceland, Luxemburg, and Malta < 20% (19).

Patients contaminated with imipenem-resistant P. aeruginosa strains experience worse treatment outcomes than those infected with imipenem-susceptible strains, causing long-term hospitalization, high costs, and substantial mortality (19). Although P. aeruginosa resistance to carbapenems is multifactorial, the production of MBL enzymes is one of the most common mechanisms (19, 20). According to the results of a meta-analysis, the total prevalence of MBL-producing P. aeruginosa in Iran was 32.4% (21). In addition, the most prevalent genes encoding MBL enzymes in Iran were blaVIM (19%) and blaIMP (11%) (21). In the current study, 53.5% (45 out of 84) of P. aeruginosa isolates were phenotypically screened as MBL-producing strains, which were divided into 42 different ERIC-PCR types based on the ERIC-PCR technique (Figure 2). On the other hand, our findings revealed that the prevalence of IMP-producing strains among imipenem-resistant P. aeruginosa clinical isolates was 35.5% in Ardabil city.

As known, MLST is a powerful molecular typing method for epidemiological studies of P. aeruginosa infections. According to MLST typing, P. aeruginosa sequence types (ST), ST111, ST175, ST235, ST244, and ST395, have a global distribution and are associated with outbreaks (34, 35). Among these sequence types, P. aeruginosa ST235 is the most prevalent one and is associated with highly virulent infections and multidrug resistance to carbapenems, aminoglycosides, and fluoroquinolones (34-36). Molecular typing of P. aeruginosa strains in the current study indicated that all IMP-producing isolates belonged to ST235 (Table 3). The isolation of P. aeruginosa ST235 in different hospitals in Ardabil city warns that this high-risk clone is disseminated in the investigated hospitals.

The high prevalence of imipenem-resistant P. aeruginosa strains in our region calls for combination therapy using synergistic antibiotics to achieve proper treatment of P. aeruginosa infections. On the other hand, considering that all IMP-producing isolates belonged to P. aeruginosa ST235, the emerging and spreading of this predominant clone in the investigated hospitals is an important challenge owing to the highly virulent and drug-resistant nature of this clone. Therefore, the continuous monitoring of drug resistance trends, resistance mechanisms, and virulence genes in local strains is essential.