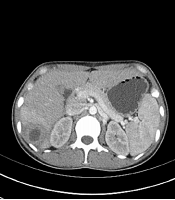 The case was a 34-year-old female patient admitted to the hospital due to high fever. The diagnosis of liver abscess was confirmed by imaging studies and liver puncture. We finally confirmed the pathogen as F. nucleatum by next-generation sequencing (NGS). After the targeted anti-infective treatment, the patient recovered and discharged.

As a new microbial detection method, NGS can still help in clinical practice. In addition, to improve the positive rate of anaerobic bacteria culture, we should pay attention to avoid contact with air in the process of specimen collection when the pathogenic bacteria are suspected to be anaerobic bacteria.

Pyogenic liver abscess (PLA) is caused by pyogenic bacteria invading the liver. The incidence rate of liver abscess in the United States is about 4.1/100000, while in Asian countries is about 11.99 ~ 17.59/100000 (1, 2). The mortality of bacterial liver abscess is very high. A study of 431 patients in Taiwan showed that the mortality rate was as high as 15% (3). The pathogens enter the liver mainly in the following ways: (1) biliary infection; (2) bloodstream infection; (3) direct spread of intra-abdominal infection; (4) direct invasion; and (5) cryptogenic infection.

As can be seen from these routes of invasion, the pathogens mainly come from digestive system and abdominal cavity. While Klebsiella pneumoniae is the main pathogen in Asia (4), Escherichia coli, K. pneumoniae, and Streptococcus are the main pathogens in western countries (5). In addition, Anaerobes and Staphylococcus aureus can also cause liver abscess. Fusobacterium nucleatum is a Gram-negative obligate anaerobe that mainly colonizes the oral cavity and is considered an opportunistic pathogen. Liver abscesses caused by F. nucleatum are very rare, and our case is reported as the first case in China.

The patient was a 34-year-old female. She had fever with highest temperature of 40.2°C without obvious inducement. The patient was immunocompetent and had a good oral hygiene. There was no history of using drugs associated with reduced immunity, such as hormones or chemotherapy. No diseases were found in oral and digestive tract examination. White blood cell count was 8.21 × 109/L, neutrophil count was 83.8%, high sensitivity C-reactive protein (CRP) was 95.6 mg/L, and procalcitonin (PCT) was 0.22 ng/mL. Abdominal computed tomography (CT) scan showed multiple small patchy hypodense foci in the right lobe of the liver (Figure 1A).

Abdomen magnetic resonance imaging (MRI) showed multiple masses of abnormal signal shadow of the liver. The larger one was located in the liver with the right upper lobe, and its size was about 74 × 47 mm (Figure 1B). Considering that the patient may have liver abscess, liver biopsy was performed. The results showed that the liver tissue was inflammatory, and the diagnosis of liver abscess was clear. The patient was given puncture and drainage of liver abscess. However, drainage was not effective, and only a little bloody secretion was drained. So, the patient was given empirical anti-infective treatment. cefoperazone sulbactam was used; but since the body temperature still fluctuated, we changed the treatment to imipenem 1 g q8h intravenous drip after 5 days. 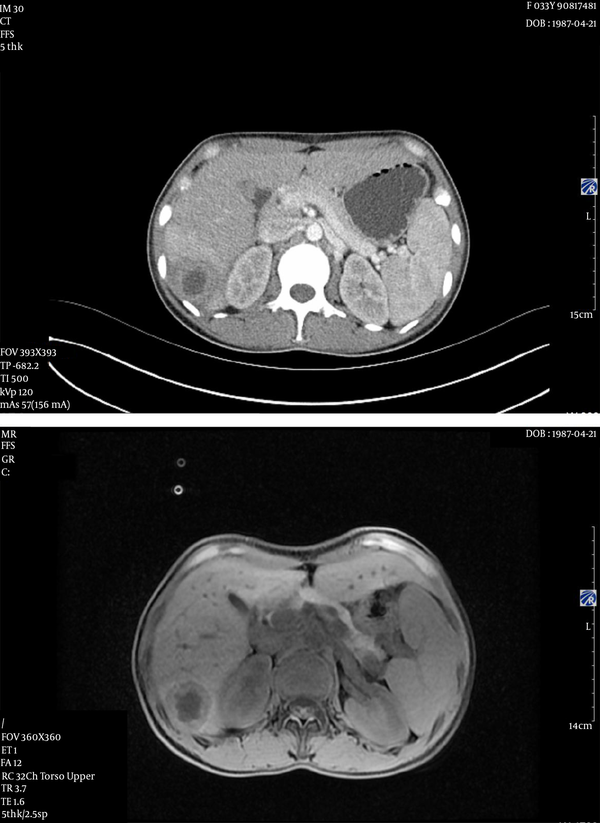 A, abdominal CT; and B, MRI indicating an abscess in the right lobe of the liver.

After anti-infective treatment, the inflammatory index of patients decreased slightly, and the patient's temperature dropped to 37.7°C. The white blood cell count was 10.62 × 109/L, neutrophil count was 8.7 × 109/L, CRP was 76.1 mg/L, and PCT was 0.10 ng/mL. In order to further identify the pathogen and adjust the use of antibiotics, liver abscess puncture was performed under ultrasound guidance and 4 mL of pus was aspirated. Since the clinical laboratory center had not cultured pathogens, the pus was sent to a third-party laboratory for microbiological examination by genetic detection. Next-generation sequencing (NGS) results showed that the pathogen was F. nucleatum (Sequences Number # 43). Based on the results of NGS, we adjusted the medication regimen. Imipenem was discontinued after 8 days of use and changed to metronidazole 80 mL q6h, amoxicillin sodium, and clavulanate potassium 1.2 g q8h.

After targeted anti-infective treatment, the patient's temperature dropped to 36.3°C. The white blood cell count was 6.43 × 109/L, and CRP was 11.2 mg/L. The inflammatory index decreased significantly. Abdominal CT showed that the lesions were significantly reduced (Figure 2), and anti-infective therapy was effective. There were no other complications in the whole course of the disease. After 20 days of treatment, the patient recovered and discharged. After discharge, the patient took amoxicillin clavulanate tablets 312.5 mg orally three times a day as well as metronidazole tablets q6h 0.4 g orally. One month later, the follow-up showed that the patient's temperature was normal. 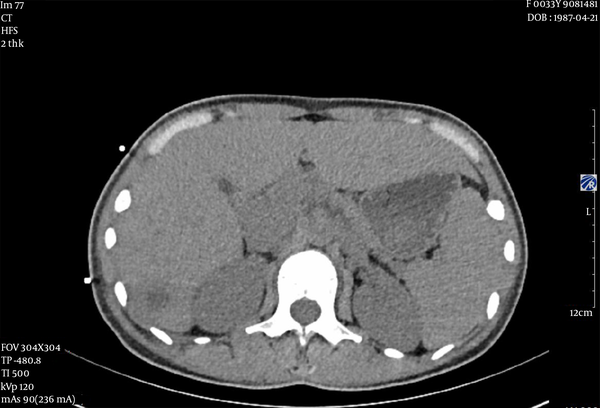 Pyogenic liver abscess is a common infectious disease of the liver, and early diagnosis is difficult. Severe sepsis, septic shock, and other serious life-threatening diseases could make the treatment time longer. In recent years, the diagnosis and treatment of the disease became difficult due to the following reasons: the increase of diabetes, malignant tumor, biliary tract disease, and abdominal infectious diseases; the production of multiple drug-resistant and highly virulent pathogens; and the increased number of interventional operations in the digestive system. There are many ways for pathogens to invade the liver and lead to liver abscess. Biliary tract infection is the most common cause of liver abscess, followed by intestinal or pelvic diseases (6, 7). Because of its route of transmission, pathogens mostly come from the digestive system and abdominal cavity. The main pathogenic bacteria of liver abscess in western countries are E. coli, K. pneumoniae, Enterococcus, and Streptococcus (5). In Asia, K. pneumoniae is the main pathogen. A study showed that K. pneumoniae is the main infection in the east region in China (4).

Diagnosis of F. nucleatum infection usually requires culture of the pathogen. However, due to the strict anaerobic environment required for culture and the high requirement for specimen collection, sometimes the pathogens could not be cultured. In a case report by Jayasimhan et al., they did not culture F. nucleatum from pus, but found it through blood culture (15). They considered that the delay in pus sampling and early anti-microbial treatment could affect the culture results. In this case, there was also no pathogen cultured from the pus, which made the further diagnosis and treatment of the disease difficult. Through NGS, the pathogen was finally identified as F. nucleatum.

In NGS, also known as high-throughput sequencing, metagenomic NGS is commonly used in microbial detection. As there is currently no uniform standard in the clinic, it has not become the recommended test, but we can use its advantages to solve practical problems. In 2014, a laboratory in the United States successfully used the NGS to detect Leptospira from a 14-year-old boy's cerebrospinal fluid, and timely anti-infective treatment saved his life. Five months later, the Centers for Disease Control and Prevention (CDC) confirmed their diagnosis by serological method (16). In this case, because the pathogen could not be cultured, NGS of pus was used to identify the pathogen, which provided an important basis for further targeted anti-infective treatment. We believe that the failure to culture the pathogen may be related to empirical medication during the initial stage of treatment. The use of antibiotics in early treatment inhibited the pathogenic bacteria. NGS results showed that the relative abundance of F. nucleatum was not high, which confirmed our inference.

Our case report is valuable mainly for these reasons. Firstly, this is the first case of liver abscess caused by F. nucleatum in China. Secondly, in this case, we identified the pathogen and successfully cured the patient without culturing pathogenic bacteria. The idea of diagnosis and treatment can be used as a reference. Thirdly, this case reminds us that in order to improve the positive rate of anaerobic bacteria culture, we should pay attention to avoid contacting with air in the process of specimen collection when the pathogenic bacteria are suspected to be anaerobic bacteria. Finally, as a new microbial detection method, NGS can still be helpful in clinical practice, although it has not been widely used.