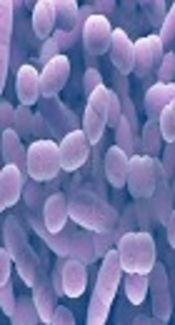 Pharyngeal carriers are the source and transitional vectors of invasive diseases. Attachment is the first step in pathogenicity. Strains of Streptococcus as normal flora can cause diseases in certain circumstances. Adhesion proteins of these bacteria play a fundamental role in the attachment and colonization.

Three hundred and eight nasopharyngeal swab specimens were collected from children under 6 years. The identification of S. pneumoniae isolates was performed using biochemical tests confirmed by PCR for the presence of cpsA gene. The existence of phtD, phtE, pspC, lytA, and rrgA genes was studied by PCR amplification assays.

Our study showed that cpsA of S. pneumoniae is one of the major characteristic genetic markers for diagnostic purposes. Among five adhesion genes, lytA was the most frequent one and the strains with a combination of rrgA and lytA genes were predominant. These findings could be very useful in designing further studies on vaccines against S. pneumoniae in our country.

Streptococcus pneumoniae (the pneumococcus) is a Gram-positive bacterial species. This species is the main reason for mortality, especially in children, patients with chronic diseases, the elderly, and immune-compromised people of all ages worldwide (1). This pathogen causes economically significant diseases like sinusitis, septicemia, otitis, pneumonia, and even meningitis (2). Every year, S. pneumoniae takes the life of more than 1000000 children globally. Streptococcus pneumoniae usually binds to the epithelial cells of the upper respiratory tract and normally colonizes the nasopharynx and can be found approximately in five up to ten percent and 20 up to 40% of healthy adults and children, respectively (3). The microorganism produces a proliferation of virulence factors, including several surface proteins, polysaccharide capsules, and toxin pneumolysin (PLY) (4). However, among these factors, adhesion is essential for pneumococcal colonization and pathogenesis (4).

Among the surface proteins, the pneumococcal surface protein A (PspA) and Pneumococcal surface protein C (PspC) are the best-characterized choline binding proteins (CBPs). The abundance of CBPs in the cell wall is reported as a strain-specific trait (5). Pneumolysin is a released cytoplasmic toxin that can autolyze the cell and it is a very important virulence factor. N-acetylmuramoyl-L-alanine-amidase (LytA) is known as the major hydrolytic enzyme of S. pneumoniae (6, 7), which causes the deoxycholate and penicillin-induced cell lysis in the stationary phase (7).

The multi-functional virulence factor of pneumococcus is an adhesion so-called PspC (8) that binds to the polymeric immunoglobulin receptor (9, 10) and regulatory protein factor H of the complement system (11). Among the virulence factors on the cell surface, pili are highly significant (12). The pilus is involved in the virulence and intercedes binding of S. pneumoniae to epithelial cells (12). The pilus-encoding gene can code for three main subunits (RrgA, RrgB, and RrgC) and three sortase enzymes. Among the abovementioned sortase proteins, RrgA is a critical virulence factor in murine lung infection model and has a varied prevalence among serotypes of S. pneumoniae. The pneumococcal histidine triad protein (Pht) family is a group of surface proteins that do not contain any recognized anchor choline-binding motifs (4).

The Pht family either alone or in combination with capsular polysaccharides is reported to involve in the protection against S. pneumoniae when used as vaccines. The protein contains a protected histidine triad motif (HxxHHxH), termed Pht (pneumococcal histidine triad), that is conserved and repeated several times and involved in binding of zinc ions (13). The Pht family contains four members PhtA, PhtB, PhtD, and PhtE (5). Studies in children and adults showed that PhtD and PhtE elicit antibodies in response to natural infection are considered important antigens for S. pneumoniae in the attachment to nasopharyngeal epithelial cells (14).

This study was approved in the 33rd ethical committee meeting, Pasteur institute of Iran. (2012.Nov.20).

In this cross-sectional study, 308 nasopharyngeal swabs were collected from under 6-year-old, healthy children referred to four main care centers (Torkamani, Shobeir, Hazrate Roghayyeh, Ameneh) and the children’s Medical center of Tehran from December 2011 to August 2012. We obtained the written informed consent of the nurseries’ officials or children’s parents before sampling. They declared their willingness for using children’s data anonymously for research purposes. Nasopharyngeal swabs were kept in transport media (Stuart) (Oxoid Limited, Hampshire, England) and sent to the Department of Microbiology in Pasteur Institute of Iran.

The identification of S. pneumoniae isolates was done by biochemical methods, Gram staining, colony morphology (alpha-hemolytic, small, gray, and showing mucoid colonies), optochin susceptibility, and bile solubility. Optochin disks (6 mm; MAST diagnostics, Bostle, Mersey side) were applied to blood agar (with 5% Sheep Blood). After 24 hours incubation at 37°C in 5% CO2 atmosphere, isolates displaying zones ≥ 14 mm in diameter were considered as S. pneumoniae. Molecular tests were used for confirmation of the identified isolates by PCR amplification of cpsA gene. S. pneumoniae ATCC 6305 was used as the control strain in all the identification tests (15). The PCR amplification was carried out using thermocycler in the following conditions: initial denaturation step at 94°C for 45 seconds and 25 cycles of 94°C for 4 minutes, 54°C for 45 seconds, and 65°C for 2 minutes, followed by a final extension at 72°C for 10 minutes.

The genomic DNA of the isolates was extracted by a DNA extraction Kit (KiaSpin PCR Template purification Kit, Iran) according to the manufacturer’s protocol. Finally, the harvested DNA pellet was re-suspended in Elution Buffer to provide 70 μl of DNA sample. The presence of lytA, phtD, phtE, rrgA, and pspC genes was studied in the confirmed S. pneumoniae isolates by PCR amplification assays. The primer sequences used in this study are shown in Table 1 (Bioneer, South Korea). To confirm our PCR results, we used reference standard strains for each reaction of PCR. These strains included ATCC 6303 for pspC and ATCC 49619 for lytA, phtD, and phtE genes.

One Amplicon from S. pneumoniae with the gene rrgA was sequenced by Gen Fanavaran company. Sequences were examined for identity with published sequence data from national center for biotechnology information (NCBI).

From 308 nasopharyngeal swabs, 118 isolates were confirmed as S. pneumoniae. Samples were collected from children in three age groups: 0 - 2 years, 2 - 4 years, and 4 - 6 years. 100 (32.5%) of all isolates were from children in the age group of 0 to 2. All pneumococcal strains were sensitive to optochin and bile soluble. The presence of cpsA gene was confirmed in 102 S. pneumoniae isolates. 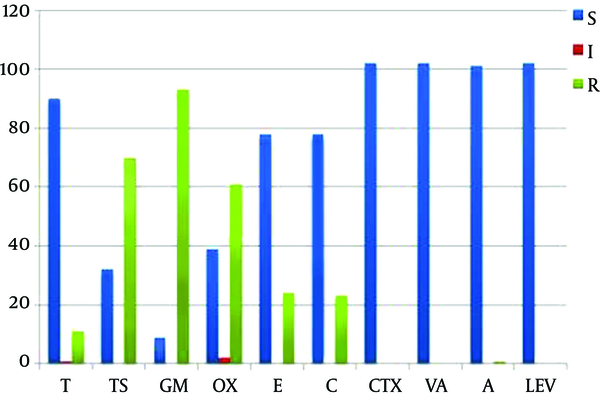 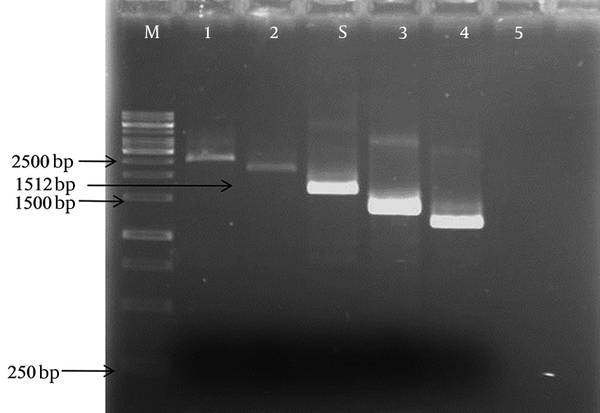 The Amplicon represented expected sequences with 99% identity with the published data from NCBI (GenBank: EF 560633.1). This was used as a positive control for the rrgA gene in PCR reactions.

Colonization of S. pneumoniae in the respiratory tract can cause bacteremia and finally induce systemic infections such as septic arthritis, meningitis, and pneumonia, especially in children under 6 years of age (8). Non-pili adhesion is also important in enabling binding to target cells and colonization of S. pneumoniae. These adhesion genes can cause the expansion of direct interaction and invasion of bacteria to epithelial surfaces. In addition, these genes play a role in survival and colonization of S. pneumoniae in the host. Streptococcus pneumoniae strains are identified by phenotypic detection and confirmed with PCR amplification of cpsA gene. To differentiate S. pneumoniae from the closely viridans group streptococci as well as from other pneumococcus-like streptococci such as S. pseudopneumoniae, this PCR amplification assay seems to be critical.

Many virulence genes contribute to the colonization of S. pneumoniae; however, our study only demonstrated this for pspC, phtD, phtE, rrgA, and lytA genes. Our study showed that cpsA of S. pneumoniae is one of the major characteristic genetic markers for diagnostic purposes. The most important finding of this study was the high level of penicillin resistance in strains isolated from the nasopharynx of children. In this study, cefotaxime, vancomycin, and amoxicillin were the most effective drugs against S. pneumoniae infection. However, cotrimoxazole and gentamicin were the less effective drugs against the study S. pneumoniae isolates. It should be mentioned that the number of penicillin-resistant isolates is considerable. The frequency of the adhesion genes was 86 (84.3%), 54 (52.9%), 51 (50%), 43 (42.1%), and 31 (30.3%) for lytA, rrgA, phtE, pspC, and phtD, respectively.

Among the five adhesion genes, lytA was the most frequent one. 87 (85.2%) children were positive for lytA gene. Most of the S. pneumoniae isolates used lytA gene for binding to epithelial cells of the nasopharyngeal region. Autolysin, which was found in all strains, appears to be a suitable target virulence factor and apparently highly conserved for inclusion in a potential vaccine (19). The LytA protein of Pneumococcus is regarded as the main autolysin factor of S. pneumoniae, which has a significant function in the pathogenesis of S. pneumoniae. Actually, the pathogenesis starts by releasing this pneumolysin. Thus, this autolysin has a fundamental role in the lysis after exposure to certain antibiotics. In addition, it has been reported that lytA gene has higher specificity than ply gene for the identification of S. pneumoniae (16).

Our study showed that lytA allocated the highest percentage and the frequency of lytA gene in healthy children of Tehran (Iran) was close to that of children in Mashhad (Iran) (20). On the other hand, rrgA was more frequent compared to in Mashhad (20). Of the total, 45 children had both rrgA and lytA that illustrated the important role of these factors in colonization (21). The frequency of the phtE gene in nasopharyngeal samples of care centers of Tehran was less than that in other countries (22) and 32 (62.7%) cases were positive for phtE gene belonging to healthy children less than 2 years of age. Our results showed the pspC gene prevalence was more than that in Mashhad (21). In this study, we observed the genetic diversity of pspC gene in isolates from children under 6 years of age. The bands of 25 of 43 strains were the same as standard reference strain. The PCR product size of 43 strains was about 1200 bp to 2500 bp. These results were consistent with a study conducted in the UK (17) that showed 78 out of 102 S.pneumoniae strains had PCR products ranging from 1.5 to 2.2 Kb in size (17).

In our study, phtD had the least frequency. The frequency of the phtD gene in healthy children in Tehran was less than that in other countries (22) and 21 (67.7%) cases that were positive for phtD gene belonged to healthy children under 2 years of age. These differences may be related to the geographical differences or different types of specimens. We found no correlation between the gender of children and the presence of adhesion genes; in contrast, we suggested a probable significant correlation between the age of children and adhesion genes. Of the 102 isolates, 97 (95%) from positive cases had at least one of these adhesion genes and only 5 (5%) samples harbored none of these five adhesion genes. It is likely that strains without these genes may use other adhesion factors. Similar studies can determine the dominant virulence factors of native strains. Such studies can be very useful in designing vaccines against S. pneumoniae.

Our study showed that cpsA of S. pneumoniae is one of the major characteristic genetic markers for diagnostic purposes. Among five adhesion genes, lytA was the most frequent one and strains having a combination of rrgA and lytA genes were predominant. These findings could be very useful in designing further studies on vaccines against S. pneumoniae in our country.

We thank Pasteur institute of Iran for their financial support.