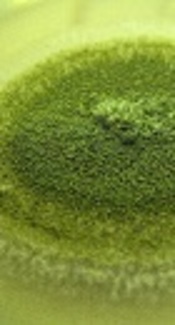 In vitro Evaluation of the Effects of Fluconazole and Nano-Fluconazole on Aspergillus flavus and A. fumigatus Isolates

Increasing azole resistance among Aspergillus strains was observed over the last decade. For this reason, viable alternatives for the current medicines are required.

The current study aimed at producing fluconazole-loaded liposomal nanoparticles and comparing in vitro antifungal activity of fluconazole and nano-fluconazole on Aspergillus flavus and A. fumigatus species isolated from patients and poultry.

Fifty isolates of A. flavus and A. fumigatus were collected from visceral and superficial fungal lesions of humans as well as pulmonary fungal infection of poultry. Liposomal nanoparticles were prepared by thin-film hydration method, using soybean lecithin, cholesterol, and fluconazole in a ratio of 10:1:1. The nanoparticles were analyzed in terms of size, zeta potential, and morphology. Antifungal susceptibility testing was carried out to examine and evaluate the minimum inhibitory concentration (MIC) of fluconazole and nano-fluconazole against Aspergillus species by the standard method of broth microdilution as described in CLSI (the clinical and laboratory standards institute) -M38A2.

Invasive fungal infections, especially those caused by filamentous fungi, increased particularly among high-risk patients such as allogeneic stem-cell transplant recipients (1). Aspergillus species are opportunistic fungi causing both allergic and invasive fungal infections. They are also important causes of life-threatening infections in immuno-compromised patients (2, 3). In humans, Aspergillus fumigatus is the most common opportunistic fungal pathogen, remarkably among immuno-compromised hosts (4). After A. fumigatus, A. flavus is the second leading cause of invasive aspergillosis, and is the most common cause of superficial infections (5). Aspergillosis is the most common opportunistic mycotic infection of the respiratory tract in birds that causes high morbidity and mortality, thus resulting in significant economic losses, especially in poultry (6). Other Aspergillus species may also be isolated from cases of aspergillosis in commercial poultry, but much less frequently than A. fumigatus and A. flavus (4).

Azoles are antifungal agents that are widely used in both agricultural and public health settings because of their excellent activity against pathogenic fungi (7). Reports of azole resistance are emerging, and resistance is now recognized as a cause of treatment failure (8). Azole resistance in A. fumigatus is a global concern and an important factor in treatment failure (9). Modification and overexpression of the azole target enzyme 14-α steroldemethylase (cyp51A) or are the main mechanisms involved in A. fumigatus azole-resistance (10). Liposomes can be the carrier for both hydrophilic and hydrophobic drugs (11).

Liposomes are relatively non-toxic and biodegradable. Therefore, they have a wide range of biomedical applications (12). The small size of lipid nanoparticles increases their access to the tissue, thereby enhances the influence of encapsulated drugs (13). Due to the increased prevalence of aspergillosis and increased resistance to common drugs and their side effects, an appropriate alternative to such medicines is essential. In the current in vitro study, the effect of nano-liposomes containing fluconazole on A. flavus and A. fumigatus were investigated by susceptibility testing.

The study was approved by the ethics committee of Tehran University of Medical Science (IR.TUMS.SPH.Rec1395.1339).

Fifty A. flavus and A. fumigates species were isolated from visceral and superficial lesions of humans and pulmonary fungal infections of poultry. Twenty species isolated from superficial fungal (nails and ear discharges) and visceral (BAL, sinus discharge, and sputum) lesions in patients referred to the mycology department of school of Public Health, Tehran University, and thirty species isolated from nodules or white plaques of lungs in dead poultry with respiratory symptoms were collected from different poultry farms in Qazvin province, Iran. Diagnosis of aspergillosis was performed by direct examination and culture on SDA. The isolated species were identified using mycological techniques such as macroscopic examination to study the morphology of colonies, microscopic methods to study the morphology of conidia, and sequencing of beta-tubulin genes to confirm the results.

3.3. Preparation of Fluconazole and Nano-Fluconazole, and Analyzing Data

3.3.1. Preparation of Fluconazole and Nano-Fluconazole

Crude powder of fluconazole (Sigma-Aldrich, Steinheim, Germany) was purchased from Sigma Company. Liposomal formulation of fluconazole was prepared by thin-film hydration method (14). To prepare liposomes, lecithin, cholesterol, and fluconazole were used in a ratio of 10:1:1. A thin film was formed by dissolving the two substances at 5.12 mg/mL in an organic solvent mixture comprising chloroform-methanol (1:1) containing fluconazole. The final concentration of 5,120 μg/mL was prepared. The thin film was dissolved in 100 mL of distilled water by incubating the mixture in water bath for 30 minutes at 55 - 60°C. Then, the liposome mixture was sonicated by a probe-type ultrasonication for 15 minutes. The mixture was immediately transferred to laboratory and used to assess MIC. Blank liposomal formulation was prepared in the same manner, without adding fluconazole.

3.3.2. Measurement of Zeta Potential and Particle Size of Blank/Fluconazole-Loaded Nano-Liposomes

Zeta potential was measured by a Zetasizer device, based on laser light scattering. Particle size distribution in the device was evaluated based on PDI (poly-dispersity index).

To examine nanoparticles structure, a scanning electron microscope (SEM) was used. A small quantity of sample was placed on a glass surface in 1 × 1 cm. It was then placed inside an incubator at 37°C until the sample was completely dried. Then, the particles were coated with gold. Magnifications of X20,000 and X40,000 were used.

3.4.1. Preparation of Stock Solution from Fluconazole and Nano-Fluconazole

In the current study, the antifungal susceptibility test was performed using broth microdilution standard method based on clinical and laboratory standards institute (CLSI) M38-A2 document to assess and evaluate MIC of fluconazole and nano-fluconazole against Aspergillus species; Candida krusei ATCC 6258 was used as standard quality control (15). In order to dilute the drugs stock solution, the RPMI (Roswell Park Memorial Institute) 1,640 medium (Sigma Chemical Co.) buffered to pH 7.0 with morpholinepropanesulfonic acid (MOPS; 0.165 M) (Sigma) and L-glutamine without bicarbonate were used. Final concentrations of fluconazole and nano-fluconazole ranged 1 - 512 μg/mL. According to standard protocol, the drugs in final concentrations were pipetted into the wells of 96-well microplates. Then, the fungal suspension prepared according to CLSI M38-A2 protocol containing 0.4 × 104 - 5×104 CFU/mL fungal cells was added.

The 11th well was chosen as a negative control containing RPMI-1640 medium, but lacking the drugs and the fungus. The 12th well was taken as a positive control containing RPMI-1640 medium plus fungal suspension, but lacking the drugs. After gentle mixing, microplates were incubated for 48 hours at 35°C. All tests were performed in triplicate. After 48 hours of incubation, the microplates were examined to determine MIC. The MICs of fluconazole were determined visually. To ensure the inhibition of fungal growth by nano-liposome particles, blank nano-liposome (without drug) was used in the current study, and no antifungal growth evidence was observed.

According to the obtained of data, t test was used to compare the groups (P < 0.05).

Table 1. Clinical Specimens and the Number of A. flavus and A. fumigatus Isolates 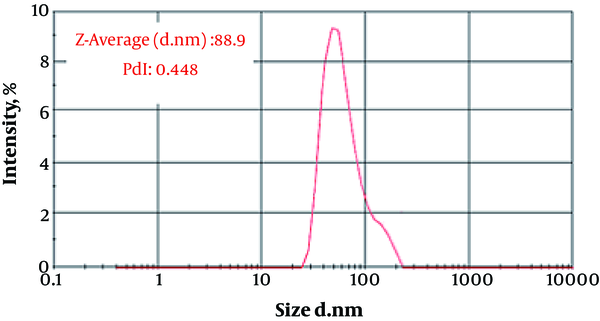 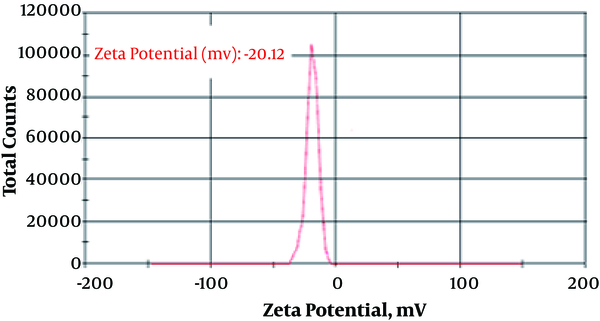 Figure 3 shows the particle size distribution of fluconazole-loaded nano-liposomes. Figure 4 shows a greater magnification for a better view of the structure and spherical shape of fluconazole-loaded nano-liposomes. According to the results of SEM, the prepared particles were in the particle size range obtained by a Nano Zetasizer. 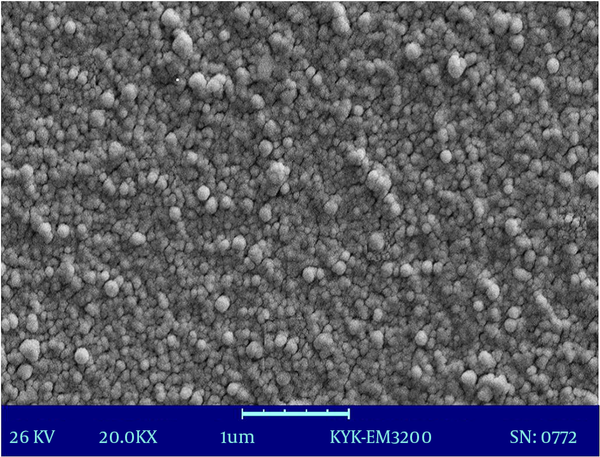 Image of nanoparticles with lower magnification 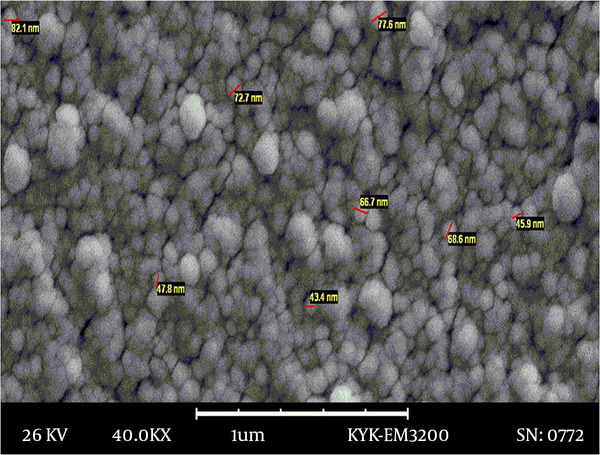 Image of nanoparticles with greater magnification

Table 2. Results of Antifungal Susceptibility of A. flavus and A. fumigatus Isolates in vitro (n = 50) 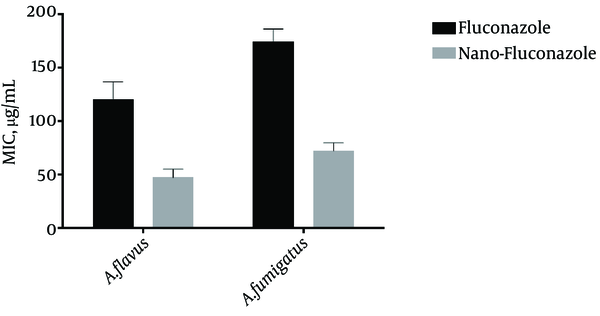 The mean MIC of fluconazole and fluconazole-loaded nano-liposome against A. flavus and A. fumigatus

In the present study, results showed that fluconazole-loaded nano-liposomes were more effective than the common form of fluconazole regarding the removal of Aspergillus species. Using nano technology could possibly change the properties of the substances. Zeta potential is an important criterion for the stability of a colloidal system, and a minimum ZP of ± 20 reported by different studies is desirable (16, 17). Cholesterol was used to improve stability because cholesterol can increase zeta potential (18). Zeta potential and particle size have a major effect on various properties of nano-drugs (19). The main objective of the current study was to obtain an ideal formulation in terms of particle size and encapsulation to evaluate the antifungal effects of the nano-drug and compare the anti-fungal activity of these drugs with those of the common form of the fluconazole; the target was acquired.

Based on the results of the current study, fluconazole had high MIC against Aspergillus spp. Same results were reported by similar studies carried out by Fattahi et al. (20), Moore et al. (21), Messer et al. (22), and Sabatelli et al. (23). Filamentous fungi are usually not susceptible to fluconazole and MICs of this antibiotic against Aspergillus spp. are > 64 μg/mL (15). Fluconazole is a weak antifungal agent due to direct ligand bindings. Therefore, in addition to increasing azole resistance, Aspergillus spp. has inherent resistance to fluconazole (24). The main disadvantages of traditional methods were wastage of the medicine, adverse side effects related to doses, high cost of raw materials, and physicochemical incompatibilities. As a result, a part of the drug is excreted by the body without changes. In order to prevent and reduce such disadvantages, the pharmaceutical industries took a new stride toward the production and use of new systems for drug delivery. In the classical drug delivery systems, the medication is systemically administered in the body, and cells receive the drug from the blood based on their locations. The most important drug delivery systems are hydrogels, nano-fibers, and nano-liposomes, which are now subjected to extensive research (25).

In the current study, nano-liposomes were used in drug delivery. Lipids have low toxicity, but good lyophilization properties. Lipid nanoparticles as a drug delivery system increase chemical stability of the encapsulated drugs and allow controlled release of drugs. In addition, these systems are safe and secure carriers that can be easily produced on a large scale (26, 27). Further, Gupta et al. stated that the use of lipids increases penetration of fluconazole through the skin (28). The use of fluconazole-loaded nano-liposomes against resistant and sensitive species of Candida spp. showed better antifungal activities than the common form of the drug (16). Use of nano-liposomes has many advantages, including improved penetration and diffusion of active ingredients, selective transport of active ingredients, longer release time, and greater stability of active ingredients (11). Nanoparticles increase bioavailability, solubility, and permeability, and can decrease drug dosage (29).

In the current study, the variables and parameters were modified as much as possible to obtain optimal fluconazole-loaded liposomal formulation. Dosage, lipid value, cholesterol value, and the ratio of drug to lipid are some of the variables involved in the production of liposomal formulations. It seems that the principal reason for the effectiveness of fluconazole-loaded nano-liposomes is the properties of nanoparticles that bring about change in the nature of matter at the nanoscale (25). With decrease in particle size, the number of molecules present at the surface of particle increases. Therefore, in a nanostructure, the surface ratio increases with respect to the volume (30). Further, increase of cholesterol in the lipid formulation allows more fluconazole to be encapsulated in nanoparticles, and brings about controlled and sustained release of loaded fluconazole; thereby, enhancing its chemical stability. Most probably this controlled release of medicine that allowed the continued effect of drug over a period of time reduced the expression of CYP51A gene in the isolates and broke the barrier of resistance, leading to a more effective drug.

Based on the results of the current study, further in vitro researches on the use of nano-drugs can help to introduce a new effective treatment with fewer side effects for patients with fungal lesions. This method can be useful to solve the problem of microbial resistance to commonly used antibiotics.

Copyright © 2018, Jundishapur Journal of Microbiology. This is an open-access article distributed under the terms of the Creative Commons Attribution-NonCommercial 4.0 International License (http://creativecommons.org/licenses/by-nc/4.0/) which permits copy and redistribute the material just in noncommercial usages, provided the original work is properly cited
download pdf 2.37 MB Get Permission (article level) Import into EndNote Import into BibTex
Number of Comments: 0