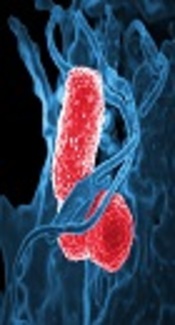 A newly emerged hypervirulent strain of Klebsiella pneumoniae has caused great concern globally; however, its molecular characteristics have been rarely reported in Iran.

The goal of this study was to detect the virulence determinants and serotypes of K. pneumoniae and to evaluate the association among selected virulence traits and blaCTX-M-15 gene in southeastern Iran.

One hundred and three non-duplicate K. pneumoniae strains were isolated from clinical samples. The isolates were identified by standard bacteriological tests. Confirmed isolates were examined to detect a selection of virulence genes (wabG, rmpA and iucB) and serotypes (K1, K2, K5 and K20) by PCR. The isolates were studied foe the presence of beta-lactamase (blaCTX-M-15) gene. SPSS software (version 19.0) was used for data analysis.

Our data indicate a correlation between presence of virulence gene and blaCTX-M-15 in K. pneumonia isolates. Further research should be undertaken to unravel aspects of both virulence factors and antibiotic resistance which may probably contribute to managing future spread of infectious diseases.

Classic Klebsiella pneumoniae are multidrug-resistant strains associated with nosocomial infections outbreak and its hypervirulent strains are related to severe community-acquired infections (1, 2). During the past decade, CTX-M enzymes have become the most prevalent extended spectrum beta-lactamase (ESBL) enzymes in nosocomial infections caused by K. pneumoniae (3, 4). Klebsiella pneumoniae strains with plasmids harbouring blaCTX-M-15 have been detected in clinical isolates worldwide (5).

Bacteria can acquire antimicrobial resistance by the spread of transmissible plasmids, which may also carry virulent traits. The acquisition of antibiotic resistance and virulence determinants may represent a survival benefit to the bacteria (6). Several virulence genes such as the regulator of mucoid phenotype A gene (rmpA), iron acquisition system aerobactin (iucB) and lipopolysaccharide synthesis (wabG) have been detected and determined to be associated with the hypervirulent variant of K. pneumoniae. Both aerobactin system and regulator of mucoid phenotype A gene are found almost in all reported hypervirulent variants of K. pneumoniae strains located on a large plasmid. The important roles of rmpA and wabG genes are in capsular polysaccharide and lipopolysaccharide syntheses, respectively (7, 8).

Capsular polysaccharide (K antigen) is a major virulence factor responsible phagocytosis and serum killing resistance. At least 78 capsular serotypes have been identified while, serotype-related variation in infection severity have been observed. Strains with capsular serotypes K1 and, to a lesser extent, K2, K5, K20 and K54, have been recognized as the predominant virulent strains (8, 9).

The aim of this study was to identify the mucoviscosity, iron acquisition, lipopolysaccharide synthesis and serotypes of K. pneumoniae strains isolated from clinical specimens and to evaluate the association among virulence traits and blaCTX-M-15 gene.

This study has been approved by the ethics committee of Kerman University of Medical Sciences (Code Number: IR.KMU.REC.1394.496), and written consent has been obtained from all patients.

From October 2014 to May 2015, 103 non-duplicate non-consecutive K. pneumoniae were collected from patients referred to different clinical laboratories and hospitals in Kerman city (southeastern Iran). Clinical isolates were mostly from urine, wound, tracheal secretions and blood. The isolates were identified by standard biochemical and bacteriological methods. Isolates were then preserved at -70°C in brain-heart infusion (BHI) (HiMedia, India) broth with 30% glycerol until further tests. Bacterial genomic DNA was extracted from isolates using a kit (Topaz gene research, Iran) according to the manufacturer’s instructions.

Specific PCR primers for the detection of rmpA, wabG and iucB genes were previously described by Chen et al. (8).

All isolates were screened by PCR for the blaCTX-M-15 gene, as described by Messai et al. (10).

The presence of hypermucoviscosity was evaluated using the string test, and a positive result was defined as formation of a viscous capsular string > 5 mm in length by stretching bacterial colonies on an agar plate (11). Klebsiella pneumoniae is known as an important reservoir for various types of ESBL enzymes, and has spread worldwide (12). The high rate of CTX-M producing K. pneumoniae prevalence and its widespread dissemination in Iran is causing concern (13). Virulence genes thought to be associated with invasive community-acquired infections include lipopolysaccharide synthesis, iron acquisition system, hypermucoidy and specific polysaccharide capsule serotypes (2). The present study showed a correlation between the epidemiology of specific virulence genetic traits and serotypes with blaCTX-M-15 gene; a first step toward understanding whether there is a link between virulence and resistance. The results from previous researches have shown that there is a link between resistance and virulence in Escherichia coli isolates (6). Lavigne et al. demonstrated that 14 virulence factors were less prevalent in ESBL isolates than in susceptible E. coli isolates (14). In another study by Lee et al. showed that CTX-M producers of E. coli isolates had fewer virulence factors than TEM-producing isolates (15).

The results showed a high (45.6%) prevalence of blaCTX-M-15 gene among the K. pneumoniae isolates. The existence of lipopolysaccharide synthesis encoding gene (wabG gene) was one of the most common virulence genes identified among the studied isolates. The findings by Chen et al. showed that there was high rate of wabG gene among 327 K. pneumoniae clinical isolates in China (8). According to the results of the current study, K1 serotype was detected in ~3% of the isolates. Lipopolysaccharide and capsular polysaccharide components are important pathogenic traits in K. pneumonia-caused bacteremia and pneumonia (16). The K1 strains were wabG, iucB, rmpA and blaCTX-M-15-positive genes, which indicate that most of the K1 isolates tested in this study, were closely related to hyper-virulence and ESBL. Previous studies have shown that the K1 serotype K. pneumoniae isolated from liver abscesses is less resistant to antibiotics when compared with other serotypes (17, 18), whereas previously published data indicated that the K1 serotype is associated with antibiotic resistance (19, 20).

Of the virulence genes, wabG was significantly more common in strains producing the blaCTX-M-15 group ESBLs. Derakhshan et al. compared the occurrence of rmpA and wcaG genes with the production of class 1 integron (intl1) among K. pneumoniae strains isolated from clinical specimens. The prevalence of wcaG was more frequent in the intl1 producing K. pneumoniae (21). The findings of this study indicated that the numbers of wabG-carrying isolates were more common in strains producing the blaCTX-M-15 gene (P < 0.05). The results of the current study showed that the rmpA gene was detected in quite a low frequency compared to other isolates. The rmpA gene encodes a transcriptional activator of capsular polysaccharide which is one of the major contributing factors of virulence in K. pneumoniae, promoting biofilm formation and is closely associated with the hypermucoviscous phenotype (8, 22). Yu et al., showed that rmpA-positive isolates were related to the clinical syndrome caused by invasive strains and with the hypermucoviscous phenotype (23). Another study that demonstrated the relationship between rmpA, virulence and specific polysaccharide capsule serotypes is yet to be elucidated (9).

In summary, the data presented in this study suggest that blaCTX-M-15 producing K. pneumoniae contain high levels of wabG virulence gene. However, the association of virulence traits and antibiotic resistance in different studies are not clear. More in depth molecular epidemiologic researches on the genetics between virulence factors and antibiotic resistance are sorely needed, to fully understand the relationship between virulence and resistance genes in K. pneumoniae strains.

This work was supported by from research center for tropical and infectious diseases, Kerman University of Medical Sciences, Kerman, Iran (No: 94.658).

Copyright © 2018, Jundishapur Journal of Microbiology. This is an open-access article distributed under the terms of the Creative Commons Attribution-NonCommercial 4.0 International License (http://creativecommons.org/licenses/by-nc/4.0/) which permits copy and redistribute the material just in noncommercial usages, provided the original work is properly cited
download pdf 3.64 MB Get Permission (article level) Import into EndNote Import into BibTex
Number of Comments: 0