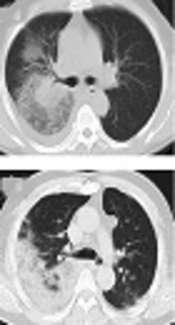 In spring 2013, an epidemic caused by novel H7N9 virus broke out in Mainland China and caused mild to fatal clinical symptoms in the infected subjects. To further gain knowledge of this virus, authors reported the two human cases of H7N9 infection identified in Taizhou City in 2014. Clinical characteristics, treatment strategies, and interferon-induced transmembrane protein-3 (IFITM3)-rs12252 single-nucleotide polymorphism (SNP) analysis were studied that maybe valuable for early diagnosis and treatment of individuals with H7N9 infection.

The study included two patients infected with H7N9 virus. A 53-year-old, single male (case 1) and a 73-year-old retired male (case 2) were admitted due to fever, cough, short of breath, and progressive respiratory distress. Chest computed tomography (CT) scan examinations revealed ground-glass opacities (GGOs) and pulmonary lesions in the right lung lobe in both patients. Both of them were confirmed to be infected with H7N9 virus based on the results of real-time polymerase chain reaction (PCR) by Taizhou Center for Disease Control and Prevention (CDC). SNP genotyping of IFITM3-rs12252 was performed for the two cases and the results were analyzed, the laboratory test showed that both of the patients carried the T/C genotype. After treatment, the two patients recovered from the H7N9 infection and were discharged in good health condition.

The current study results suggested that together with chest images and laboratory test results, IFITM3-rs12252 genotype analysis might help to predict the severity of H7N9 infection that is valuable for the treatment and management of patients with H7N9 infection.

On 31 March 2013, the National Health and Family Planning Commission of China notified the World Health Organization (WHO) of three cases (two cases in Shanghai, one case in Anhui) of human infection with novel avian influenza A (H7N9) virus (1). As of 30 December 2016, a total of 809 human cases of H7N9 infection were confirmed. Infection with novel H7N9 virus caused mild to severe respiratory symptoms (2). Further understanding of the clinical features of the infections associated with the novel H7N9 virus is critical to develop appropriate strategies to treat and prevent H7N9 infection and its associated diseases. The current study reported two confirmed H7N9 cases in Taizhou City, Jiangsu province that is located about 200 miles from Shanghai, China. Furthermore, clinical characteristics and analysis of the H7N9 infected cases were reported before, during, and after the patient’s treatment in the Peoples’ Hospital of Taizhou.

The current study protocol was approved by the institutional review boards of the Taizhou Institute of Virology and Peoples’ Hospital of Taizhou, and all the experiments and procedures were in accordance with human subject’s guidelines. Written informed consent was obtained from the patients or their families. General patient information, clinical symptoms, laboratory test results, chest radiographic findings, and treatment history were recorded and analyzed in the further studies (3).

In February 2014, the first case of human infection with H7N9 virus was encountered at the People’s Hospital of Taizhou and in the following month, the hospital received another patient with the same infection. The case 1 was a 53-year-old single male contacted with chicken in the past week, and the case 2 was a 73-year-old retired male; they lived in different areas of Taizhou (Jiangyan and Gaogang districts, respectively); the case 2 was previously exposed to live pigeons in the market (Table 1). Before being transferred to the Peoples’ Hospital of Taizhou, the two patients had been admitted to local hospitals and received treatment of influenza-like illness (ILI).

Table 1. Clinical Characteristics and Treatment Outcomes of the Two Patients

Blood cell count and biochemical test results were obtained within three days of admission. In terms of white blood cells (WBCs), the lymphocyte count was lower than the normal range in both patients. In addition, the two patients had elevated levels of neutrophils, cystatin C, C-reactive protein (CRP), and lactate dehydrogenase (LDH). The case 2 had elevated level of creatine kinase (CK), which was not tested in the case 1. Laboratory test results are shown in Table 2. Chest computed tomography (CT) scan findings revealed ground-glass opacities (GGOs) and pulmonary lesions in the right lung lobe in both patients in the early stage of the disease (Figure 1). Both patients were treated with oseltamivir (75 mg twice daily) and traditional Chinese medicine (TCM), Xiyanping, for antiviral therapy; they also received antimicrobial therapy and supportive treatment. After treatment, both of them recovered and were discharged in good health conditions. The indexes of the cases are described in Table 1.

Table 2. Laboratory Findings in the Early Stage of the Two Patients Previous studies showed strong correlation between the IFITM3 and disease severity following influenza virus infection (4, 5). For example, the presence of SNP IFITM3-rs12252 has direct correlation with the severity of the diseases associated with H7N9 infection (4). To address this issue, the 300-nucleotide-long region of the IFITM3 locus encompassing SNP rs12252 was sequenced in the patient. Genomic DNA was extracted from 500 UL of whole blood using the BloodGen Mini Kit (CW2087, CWbio, China), and the region of IFITM3 containing rs12252 was amplified by polymerase chain reaction (PCR) with primers, as described in previous studies (5). The PCR products were purified and then subsequently subjected to bi-directional DNA sequencing in Invitrogen, Inc. (Shanghai, China). SNPs were identified using Chromas (Technelysium Pty Ltd., South Brisbane, Australia). The obtained results showed that both of the patients carried the T/C genotype, which may partially explain why their clinical outcomes were mild and both of them could recover from the H7N9 infection.

In the spring of 2013, human infections with novel H7N9 virus were firstly reported in Mainland China, which caused mild to severe respiratory symptoms in patients. In spring 2014, two cases of human infection with H7N9 were encountered at the People’s Hospital of Taizhou. The current study reported clinical characteristics and analysis of the H7N9 cases before, during, and after the patient’s treatment in the Peoples’ Hospital of Taizhou.

Disease occurrence is the result of interaction among the virus, the host, and the environment. Environmental factors include differences in poultry exposure due to sociocultural behaviors, and host factors include genetic or underlying comorbid conditions (6). In the current study, both of the patients were male, aged 53 to 73 years, with at least one of the underlying diseases, and a clear history of exposure to poultry in the past week before illness onset (Table 1). All of these findings supported the idea that elderly people with underlying clinical conditions were at higher risk for H7N9 infection, which were consistent with those of the previously reported studies (2, 7). Also, both of the patients confirmed exposure to poultry seven days prior to the illness onset, and Taizhou CDC identified H7N9 viruses in the carrier poultry supplied to the markets (Table 1).

The above evidence suggested that the two patients with H7N9 infection were probably infected with H7N9 viruses through the carrier poultry. At the same time, the two patients lived in different areas and had contact with different poultry (chicken and pigeons) during the past two months, and they did not contact each other in any ways (Table 1). It suggested that they had different infection origins and maybe there were more asymmetric infections in the animals and humans in Taizhou city (8).

In the studies, laboratory test results were obtained within three days of admission (Table 2). The results of the two patients showed that the (WBC) and lymphocyte counts were lower than normal range. In addition, the two patients had elevated levels of neutrophils, cystatin C, CRP, and LDH, and the case 2 had elevated level of CK and erythrocyte sedimentation rate (ESR), which was not tested in the case 1. Chest CT scan findings revealed GGOs and pulmonary lesions in the right lung lobe in both patients in the early stage of disease (Figure 1). The above evidence suggested that high fever, cough, low WBC and lymphocyte levels, elevated CRP, cystatin C and LDH levels, and pulmonary exudative lesions were the remarkable characteristics of H7N9 infection (3).

In previous studies, researchers showed that IFITM3 played a critical role in the response of the immune system to influenza viruses, patients with the rs12252-C/C genotype of IFITM3 had more severe disease symptoms and worse clinical outcomes than the ones with T/T or T/C genotype (4, 5, 9). In the current study, both of the patients carried the T/C genotype, and their clinical outcomes were mild and both of them recovered from the H7N9 infection. Overall, the current study results suggested that it was necessary to have the SNP IFITM3-rs12252 genotype of the patient analyzed, given the fact that the analysis is simple and affordable (~US$10 per sample).

In conclusion, the current study results suggested that together with chest images and laboratory test results, analyzing SNP IFITM3-rs12252 genotype might help to predict the severity of H7N9 infection, which were valuable to treat and manage the individuals with this infection.

Authors wish to thank all the staffs in the Department of Infectious Diseases, People’s Hospital of Taizhou, and Taizhou Center for Disease Control and Prevention for providing data. Gratitude goes to Haitao Zhao, Weimin Kong, and Kuiyou Lu for technical assistance and Professor Fenyong Liu from UC Berkeley for suggestions and proof readings.