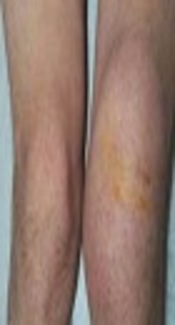 Human brucellosis is a neglected and zoonotic disease also known as Malta fever or undulant fever.

A cross sectional study was conducted to determine the seroprevalence of brucellosis and to access the role of risk factors associated with this disease in humans of Punjab, Pakistan.

A total of 250 serum samples were collected and subjected to Rose Bengal Plate Test and Enzyme Linked Immunosorbent Assay for screening of Brucella. A predesigned questionnaire was filled prior to sampling to collect data regarding socio - demographic and suspected risk factors of human brucellosis. Descriptive and bivariate statistical analysis was performed using the STATA software version 12.

Awareness programs in the rural population should be provided about the disease and its associated risk factors. Consuming unpasteurized milk and products should be avoided to control this disease.

Brucellosis is a public health problem and a neglected bacterial disease with zoonotic potential. It has infected human beings and animals for decades. The causative agent behind this disease is a Gram negative coccobacilli bacterium that belongs to the genus Brucella. Infection of human beings is mainly due to Brucella abortus, B. Suis and B. melitensis, through direct interaction with infected animals and using their contaminated products, such as milk and meat, etc. (1, 2). Animals involved in the transmission of brucellosis to humans are buffaloes, cattle, goats, sheep, and pigs (3). Brucellosis remains a big hazard to people, who are in direct contact with animals, such as veterinary staff, laboratory persons, farmers, and workforce of a slaughter house (4). Aerosol and various secretions from animals act as a source of transmission to humans (5). However, human to human transmission is very rare (6).

The alternative names used for animal brucellosis are Epizootic Abortion, Contagious Abortion and Bang’s disease. The various names for human brucellosis are Undulant Fever, Malta fever, and Mediterranean fever. It causes great reproductive losses in mature animals and it has a zoonotic potential (7). The clinical sign of human brucellosis includes headache, irregular fever, chills, profuse sweating, weakness, hepatomegaly and splenomegaly. A few cases of arthritis, epididymitis and orchitis have also been reported in humans (8). Chronic cases are due to the ability of Brucella to survive and multiply in macrophages (9).

Brucella infection occurs more frequently in persons with reduced level of immune response, which may be due to any stress factors or HIV. Although HIV increases vulnerability of infected patients towards many opportunistic pathogens, yet in such patients, brucellosis is much more elevated and is the fatal form of the disease (10).

This study was approved by the Institutional Biosafety/ Bioethics Committee (IBC) of University of Agriculture, Faisalabad under Code No: 36/ORIC and the samples were collected according to Pakistan biosafety rules (S.R.O 336(1)/2004) and the bioethics were followed during the whole span of the study.

A cross - sectional epidemiological study was conducted on 250 individuals from July 2016 to December 2016. The sample size was obtained using 20% expected prevalence and 95% Confidence Interval (CI). Samples were collected using the non - probability convenience sampling technique (11). Expected prevalence was kept as 20%, as reported previously (12). A pre - designed questionnaire was administered to all participants to collect information about socio - demographic characters (gender, age, residence, marital status, occupation, education, religion, and presence of animals at home) and hypothesized factors (exposure to animals, milking, slaughtering, consuming milk products, and consuming raw milk) to detect their influence on spread and persistence of brucellosis.

A total of 5 to 7 mL of blood was obtained from each participant following venipuncture in sterile disposable syringes and labelled properly. Serum was separated and screened for anti - Brucella antibodies along with positive and negative control sera using Rose Bengal Plate Test (RBPT) (13) and IgM - ELISA (NovaLisa, GmbH, Germany) as described previously (14). The samples that gave positive reactions for both tests were considered as positive due to the variation in the sensitivity and specificity of each test (15).

The data obtained was tabulated in the Microsoft Excel spreadsheet and analyzed using STATA version 12 (Stata Corp., USA). Descriptive analysis was used to summarize the data on the basis of percentages and chi square. Bivariate analysis was conducted to establish the association of risk factors with brucellosis in humans. Odds Ratios (OR) were calculated at 95% Confidence Intervals (CI).

A total of 250 individuals participated in the present study with age range of 10 to 70 years old. The socio - demographic characteristics and number of participants involved in this study are shown in Table 1.

4.2. Prevalence of Brucellosis in Humans

The gathered sero - prevalence of brucellosis among the 250 human participants was 16% (N = 40) and it varied among different genders. In males it was 24% and in females 8%. The highest prevalence was detected in participants ranging from 20 to 30 years of age (26.92%, N = 14). The residents of rural areas showed higher prevalence (23%) as compared to urban areas (10%). The individuals, who kept animals in their home displayed greater prevalence of brucellosis (22.50%) in comparison to those, who did not kept animals (10%). The above mentioned socio - demographic factors (gender, age groups, residence and animals at home) showed statistically significant (P < 0.05) results. On the basis of marital status and education level, the highest prevalence of brucellosis was observed as 23.07% in widowed and 18.95% in uneducated participants. Farmers and Christians showed higher prevalence (20.40% and 16.66%) on the basis of occupation and religion, respectively. These factors were none statistically associated (P > 0.05) with the disease as shown in Table 1.

4.3. Risk Factors for Occurrence of Brucellosis in Humans

Brucellosis is an animal disease, which has a zoonotic potential through interaction with infected animals and consuming their products, such as meat, milk and milk products (16, 17). The best way for Brucella diagnosis is via the isolation and identification of microorganisms, yet this method has several drawbacks. Sero - diagnosis remains an important tool for rapid detection of this disease (18). The sensitivity of RBPT is high (99%) yet specificity is low (19).

In the present study the cumulative prevalence of Brucella was recorded as 16% from the study area, which was near the findings of 17% in Uganda (12) and 18% in Turkey (20). The observed prevalence was bit higher compared to previous studies conducted in Pakistan showing 9.33% and 10%, respectively (21, 22). The difference in prevalence of brucellosis might be due to the difference in livestock population and environmental conditions, while the increasing pattern of disease is due to lack of knowledge regarding disease and pasteurization procedures of dairy products.

The prevalence of brucellosis was higher in males (24%; 30/125) as compared to females (8%; 10/125). Similar results were also recorded in Uganda (12), Pakistan (22), and Libya (23), which showed that brucellosis is more prominent in male participants. On the other hand, the present study represents that age group ranging between 20 and 30 years was highly involved in Brucella sero positivity, which coincides with a study conducted in Turkey that reported comparatively high prevalence among the younger population (24). Same results were also depicted from a study conducted in Pakistan (22). The traditional role of male and young members in livestock management and common habit of these males to take milk directly from animals is the prominent reasons behind these facts. Another factor associated with higher prevalence of Brucella, was rural area residency; these individuals were 2.3 times more likely to be Brucella seropositive as compared to urban areas. This record is in concordance with previous studies, which reported high incidences in rural areas (25-27).

The result of the study elaborates (20.40%) prevalence in farmers as compared to other employers, which is in agreement with the findings of Shahid, who reported higher Brucella positivity in farmers (33%) and Tumwine (20.5%) and also coincides the fact that Brucella is more prominent in individuals, who kept animals at their homes and who had direct contact with animals (12, 28). The possible grounds of such results are that rural residents and farmers are in close contact with animals, which act as a reservoir of brucellosis. Other factors studied were religion, marital status, and education level of owners, which were not studied previously.

The individuals involved in milking and slaughtering of animals showed non statistically higher Brucella prevalence in this study (20% and 24%, respectively), yet some other studies also favoured this fact (12, 29). On the other hand, these results are in contrast with the findings that slaughtering is a significant factor for Brucella prevalence (30). The milkers and slaughterers are in direct and frequent contact with animals and the chances of carrying infection are much more in individuals belonging to these groups. The prevalence of Brucella is 17% in participants consuming milk products as compared to 12%, in those who do not. Similarly, raw milk consumers showed significantly higher (25.37%) sero prevalence than their counter group. There is high similarity between these findings and the results of a study conducted in Palestine (26). The results of a study conducted in Bangladesh were also on the same page as that of the current study (31). This consolidates the fact that humans become infected by consuming contaminated animal products, such as milk, butter, meat, etc. (32). This might be due to very poor understanding of the disease, lack of hygiene and safety of food products, and avoidance of pasteurized milk and milk products in Pakistan.

Brucella infection, particularly in rural areas of Pakistan, is an important public health concern. This study revealed that consumption of raw milk, keeping animals at home, direct contact with animals, and living in rural areas are risk factors associated with Brucella sero positivity among humans. Awareness programs in the rural population should be provided about the disease and its associated risk factors. Consumption of unpasteurized milk and products should be highly discouraged and personal care should be adopted before dealing with the animals.

Copyright © 2018, Author(s). This is an open-access article distributed under the terms of the Creative Commons Attribution-NonCommercial 4.0 International License (http://creativecommons.org/licenses/by-nc/4.0/) which permits copy and redistribute the material just in noncommercial usages, provided the original work is properly cited
download pdf 111.70 KB Get Permission (article level) Import into EndNote Import into BibTex
Number of Comments: 0