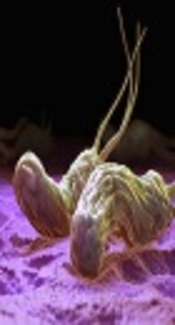 Prevalence of Helicobacter pylori in Southern Part of Iran

There are clear variations between and within countries regarding the prevalence of Helicobacter pylori. In addition, there are no estimations of its prevalence in the general population in the south of Iran.

We aimed to evaluate the prevalence of H. pylori in the rural population of Kavar, a southern city of Iran.

A random sample of 500 individuals were selected from the Kavar cohort study. Serum total IgG against H. pylori was checked. The serum positive patients recalled for stool sampling and the H. pylori stool antigen was checked using sandwich ELISA. Moreover, age and gender were recorded for all patients.

The prevalence of the H. pylori infection in our study based on serum IgG and stool Ag positivity was 41.5%, which are lower than many previous reported rates. Further studies in larger sample size and in different rural populations are needed.

Helicobacter pylori is a common infectious organism, which affected humans, and has been known as the major cause of gastroduodenal disease include peptic ulcer, nodular gastritis, gastric premalignant lesions, gastric adenocarcinoma, and mucosa-associated lymphoid tissue (MALT) lymphoma (1, 2). In addition, the role of H. pylori infection in gastroesophageal reflux disease (GERD) is controversy (3). Approximately half of the world population was infected with H. pylori at the start of the 21st century (4, 5).

Today, the worldwide prevalence of H. pylori infection is ranged from 30% to 80% and the incidence of infection increases with age (6). In addition, the prevalence of H. pylori can be differing between geographical regions and populations. It can be 35% or less in developed countries of Europe and North America and reaches to 70% or more in developing countries of Asia and Latin America due to a difference in hygiene, living conditions, the spread of H. pylori, and the utilization of antimicrobial therapy (7-10). Despite of between countries variations, some studies showed the difference in H. pylori prevalence within countries based on age and race differences (11, 12).

In Iran, as a developing country, the rate of the H. pylori infection is approximately high. It ranged from 19.2% in the city of Sari (capital of Mazandaran province in North of Iran) to 74.3 in Tehran (13). In addition, there is a significant difference in prevalence of H. pylori between different cities and provinces of Iran. This can be due to sampling from villages and cities, difference in age and gender, and some other demographic characteristics. In addition, difference in tests, which used for screening, may have an impact on the final reported prevalence. Serum antibody to H. pylori is tested in mass screening; however, stool antigen tests have been developed as a new non-invasive test (14). In addition, it has been reported that stool antigen test is a sensitive and specific mean to diagnose and screen the H. pylori infection (15). Different therapeutic regimen for eradication of H. pylori has been suggested due to antibiotic resistance of this infection (6, 16).

The Ethical Committee of Shiraz University of Medical Sciences, Shiraz, Iran, approved the protocol of this study (95-01-13-12234).

Our patients were selected from the Kavar cohort study (KCS), which started from 2006 in Kavar with a population of about 71856 and a rural nature of lifestyle. For more information regarding this cohort study, you can read the following two studies, which were published by Fattahi and his team (17, 18). Based on the complete available data and entrance date, we randomly selected 500 subjects from the database of KCS. All selected subjects received oral information concerning the study and gave their written consent. Our exclusion criteria were (a) history of H. pylori eradication, (b) history of use of proton pump inhibitors, H2-receptor antagonists, or antibiotics within the last 4 weeks prior to study, (c) history of gastric or esophageal surgery, and (d) patients with poor cooperation. Finally, 441 participants were enrolled in this study.

Blood samples were taken from the cubical vein of each participant into sterile vacutainers without any anticoagulants. Then, the samples were centrifuge at 3500 × g for 10 min and obtained serum stored at -20 °C until used. Serum samples were analyzed by sandwich enzyme linked immunosorbent assay (ELISA) test for anti-H. pylori IgG antibody using a commercial test kit (AccuBind TM ELISA, Monobind, USA) according to instructions of the manufacturer. This test has a sensitivity of 0.1424 U/ml.

For confirmation of H. pylori infection, the feces samples were taken from seropositive patients and checked for stool Ag of H. pylori. We defined H. pylori as positive if both of these test results (serum anti- H. pylori IgG and stool antigen) were positive.

The raw data were inserted into and analyzed by IBM SPSS Statistics version 23 (IBM Corp., Armonk, NY, USA). Kolmogorov-Smirnov test was used to check normal distribution of patients. Age difference between H. pylori positive and negative patients was checked using two independent sample t-test. The relationship between gender and H. pylori infection and between different age categories and H. pylori infection were analyzed using the Chi-square test. P < 0.05 was considered as a significant difference or relationship. To draw graphs, the data were inserted as mean, SD, and N or frequency into the GraphPad Prism 6.01 for Windows (GraphPad Software, Inc., CA, USA).

The schematic chart of what happened and what we found in this study are presented in Figure 1. 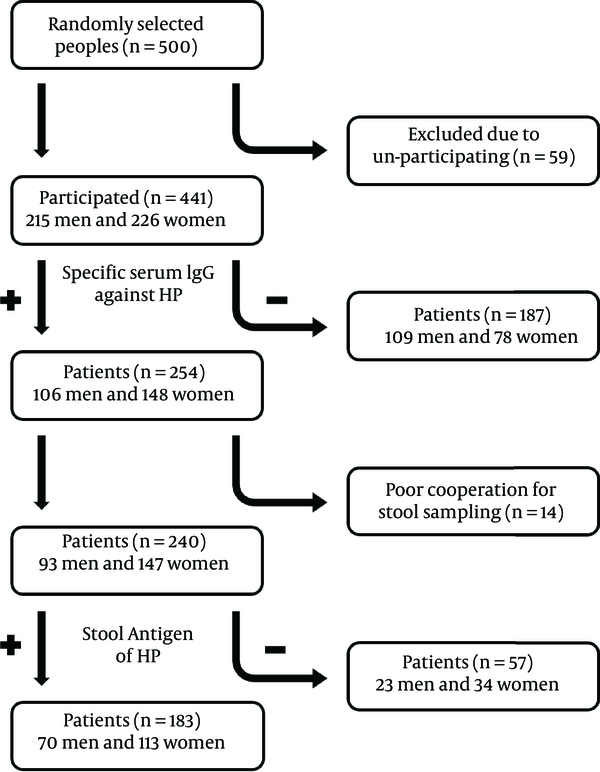 Comparison of the age of two groups of stool Ag negative and positive patients is presented in Figure 2. As shown there were no significant differences between these two groups regarding the age (P = 0.267). 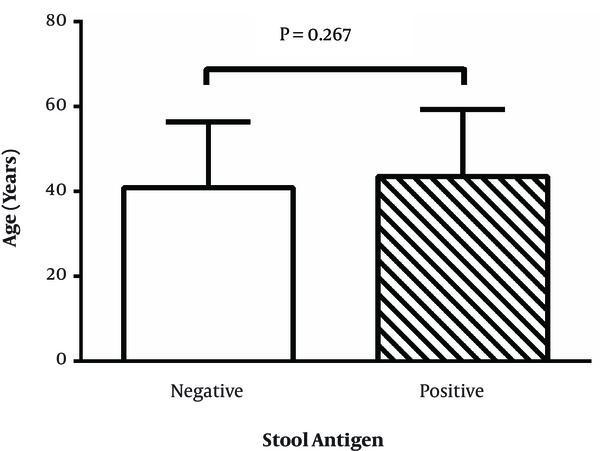 The association of gender and infection of H. pylori based on stool Ag status is presented in Figure 3. As demonstrated, there is no significant relationship between gender and H. pylori infection and both gender showed a similar positive percentage of stool Ag of H. pylori (P = 0.776). 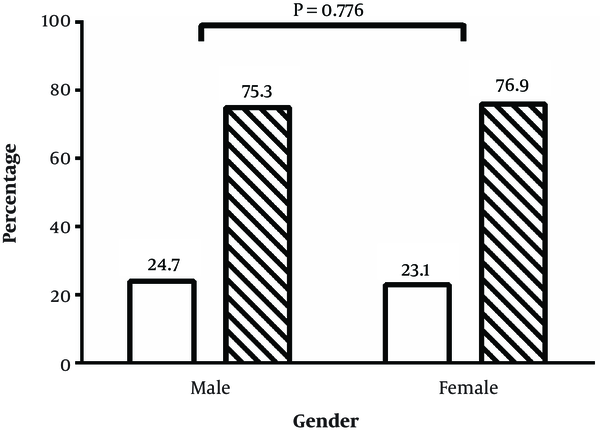 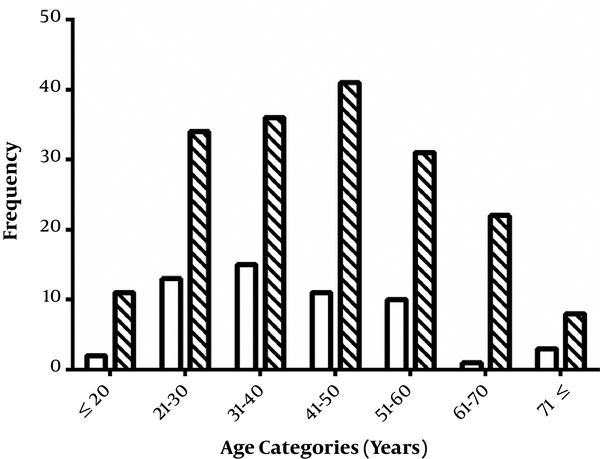 Despite the socioeconomic state, especially for countries with homogenous social class, the density of living is the most significant risk factor of H. pylori infection (23, 24), due to the fact that oral-oral and fecal-oral routes are the most common modes of H. pylori transmission. This factor, along with other above-mentioned factors, lead to higher prevalence of H. pylori infection in the rural population as other previous studies (21-24). In an old study in Shiraz, Iran, the infection rate of more than 85% of adults based on the measuring of IgG against H. pylori using ELISA was reported (25). However, it has been reported that H. pylori prevalence has now started to decline in Asia and the Middle East (26-28).

In a recent study using culturing, Gram staining, and rapid urease test, we reported the H. pylori positivity of 31% in 548 dyspeptic patients of Fars province with both rural and urban nature of lifestyle, Iran, which was surprisingly lower than other local reports (29). Regarding these differences, it can be said that high prevalence of H. pylori infection is related to socioeconomic status, poor living conditions, and poor management of drinking water (30, 31). Moreover, higher prevalence of H. pylori infection in rural against urban population may be due to the nature of the lifestyle, the source of the consumed water and lower socioeconomic state. As shown, it seems that the H. pylori prevalence is decreasing in both populations and this may be due to treatment strategies and increasing the knowledge of individuals regarding this bacterium.

Nonetheless, the stool Ag of H. pylori is qualitative test and the results are expressed as negative or positive, however, its results can be used as semi-quantitative measurement along with other parameters. As another result found in this study, the association of the positive stool Ag of H. pylori and age category was detected. The stool Ag positivity of H. pylori was related with age, increasing with age up to 41 - 50 years category and then decreasing. Helicobacter pylori is typically acquired in early childhood in developing countries and usually persist during lifetime if left untreated (29), however, the H. pylori infection rate increases with age in adults (32). Although, serum assaying of anti- H. pylori IgG or IgA antibodies could be used to determine prevalence of infection (33), stool antigen test, as a non-invasive test, could be used both safely and cost effectively to screen patients (34, 35). Regarding the decline in the prevalence of H. pylori in elderly population, a marked reduction in the H. pylori prevalence in elderly people with age more than 85 years are also previously reported (36, 37). There are several reasons for this observation, which were mentioned previously as existence of chronic atrophic gastritis in higher age, plus the severe use of antibiotics and other related drugs in this population age group (37).

Among the limitations of the current study, the following can be mentioned: 1) lack of any molecular confirmation tests of H. pylori existence such as PCR of specific genes; 2) no endoscopic evaluation of these patients and performing no antral biopsies for H. pylori checking by rapid urease test or culture. Despite these limitations, data from the present study show that the prevalence of H. pylori infection in rural population is still high and this may be related to the socioeconomic state of this population. However, no significant difference was detected between two genders in prevalence of H. pylori infection. Performing further studies on the gastrointestinal complications related to H. pylori infection in this rural population, in larger sample size, and in different rural populations is highly recommended as we direct in our center.

The authors would like to thank the Center for Development of Clinical Research of Nemazee Hospital, Shiraz University of Medical Sciences, Shiraz, Iran for editorial assistance. The authors also thank the staff of the Gastroenterohepatology Research Center for cooperation in the obtaining data and performing the laboratory tests. In addition, we would gratefully like to thank all the patients who contributed to this study.

Copyright © 2018, Jundishapur Journal of Microbiology. This is an open-access article distributed under the terms of the Creative Commons Attribution-NonCommercial 4.0 International License (http://creativecommons.org/licenses/by-nc/4.0/) which permits copy and redistribute the material just in noncommercial usages, provided the original work is properly cited
download pdf 467.92 KB Get Permission (article level) Import into EndNote Import into BibTex
Number of Comments: 0