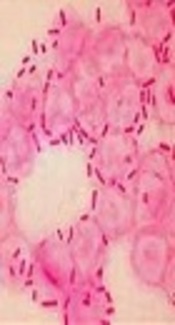 CTX-M is the most prevalent and rapidly growing type of the extended-spectrum β-lactamase (ESBL) family and CTX-M1 is the most common type of blaCTX-M.

A total of 110 isolates of K. pneumoniae were collected from different clinical samples. The antibiotic suceptibility and double disk synergy test were determined according to CLSI (the clinical and laboratory standards institute) guidelines. The polymerase chain reaction (PCR) method was performed to detect CTX-M-1. The eight loci for MLVA genotyping were selected along with the primers previously described.

Imipenem, with 84.7% susceptibility, was the most effective antibiotic against K. pneumoniae. Seventy (63.63%) isolates had ESBL positive results and 42 (60 %) of them were positive for CTX-M-1 gene. Totally, 28 MLVA genotypes were discriminated, evaluation of diversity indexes (DIs) for eight loci showed that six different alleles were the most polymorphic and the most DI was 0.807.

The findings of the current study demonstrated heterogeneity among CTX-M-1-producing K. pneumonia strains. The presence of CTX-M-1 in different MLVA types demonstrated that a certain clone is not responsible for spreading the isolates.

Klebsiella pneumoniae has emerged as an important opportunistic pathogen that causes severe disease in immunocompromised patients (1-3). During the past decades, there was an increase in the incidence of infections caused by multidrug-resistant (MDR) species of Klebsiella. Infections caused by MDR K. pneumoniae are usually associated with high mortality, morbidity, healthcare costs and prolonged hospitalization. Production of extended-spectrum β-lactamase (ESBL) is the basic reason for the multidrug resistance in Gram negative bacteria throughout the world. Since 1983 when the first ESBL enzymes were described in Europe (Germany), there is an alarming increase in the incidence of ESBL-producing bacteria (4-6). ESBL-producing K. pneumoniae strains are one of the most important problems associated with nosocomial outbreak.

Among the various reported types of ESBL worldwide, CTX-M is the most prevalent and rapidly growing member of ESBL family (7, 8). CTX genes are disseminated and identified in hospitalized and outpatients worldwide. CTX enzymes are categorized into five important groups including 1, 2, 8, 9, and 25. The CTX-M-1 is the most common type of CTX-M detected in South America, Europe, and Asia (9, 10).

Genotyping methods are used to determine the clonality of the isolates in nosocomial and household outbreaks. Multilocus variable-number tandem repeat analysis (MLVA) is one of the molecular typing methods frequently used in several studies to access genetic relations and distinguishing bacterial pathogens. MLVA is a low cost, rapid, and simple method based on polymerase chain reaction (PCR) that provides the numerical data of the number of repetitions in a locus. The sequences known as variable number tandem repeat (VNTR) vary among different strains in copy number. MLVA can provide transferable information in the form of codes that can be saved in database and exchanged between different laboratories. This method, compared with other typing methods, reduced the handling of live bacteria (11-14).

Double-disk synergy test was recommended by CLSI (16) for phenotypic characterization of ESBL-producing isolates. This test was used to confirm ESBL production using ceftazidime (30 µg) and cefotaxime (30 µg) disks with/without clavulanate (10 µg). Klebsiella pneumoniae ATCC 700603 and Escherichia coli ATCC 25922 were used as positive and negative controls, respectively. Positive ESBL isolates showed increase in the inhibitory zone diameter by ≥5 mm around the disks with clavulanate versus those of the ones without clavulanate.

Colonies of ESBL-producing K. pneumoniae were suspended in TE (Tris-ethylenediaminetetraacetic acid) buffer and genomic DNA was prepared by boiling method and used as the template for PCR reactions as previously described by Kuske et al. (17).

PCR conditions consisted of an initial activation for genotyping of isolates with positive results for CTX-M-1 gene, the eight loci, including A, D, E, H, I, J, K, and L were selected along with the primers as described by Turton (19). For this analysis, PCR was performed for each locus separately in a reaction mixture with total volume of 25 µL, containing 50 ng of DNA template, 1X PCR buffer, 2.5 mM of MgCl2, 0.2 mM of each primer, and 0.5 U of Taq DNA polymerase. The PCR condition was as follow: 95°C for 15 minutes, 35 cycles of 94°C for 30 seconds, 58°C for 90 seconds, 72°C for 90 seconds, and a final extension at 72°C for 10 minutes. After performing PCR, the size of each locus was easily determined on 1.5% gel agarose. The number of repeat for each isolate was calculated by the following formula:

The results were documented into Microsoft excel 2007 and uploaded into the web-based MLVA plus for analyzing. Any difference in one or more VNTR locus was considered to indicate a distinct type. Simpson index of diversity for each VNTR locus was calculated using V-DICE software (Health Protection Agency, London).

The findings of antibiotic resistant test showed that the most effective antibiotic was imipenem (84.7% susceptibility). The frequency of resistance to trimethoprim-sulfamethoxazole, cefotaxime, nalidixic acid, amoxicillin-clavulanic acid, tetracycline, and ciprofloxacin were 52.3%, 65%, 39.3%, 30.2%, 29.1%, and 27.1%, respectively (Table 1). In the current study, 70 (63.63%) isolates had ESBL positive results. The results obtained from PCR reaction using CTX-M-1 primers indicated that 42 out of 70 (60%) isolates were positive. PCR product for CTX-M-1 gene is shown in Figure 1. 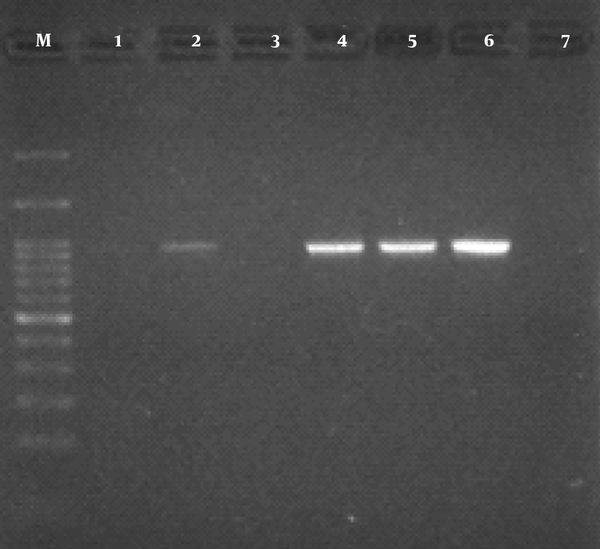 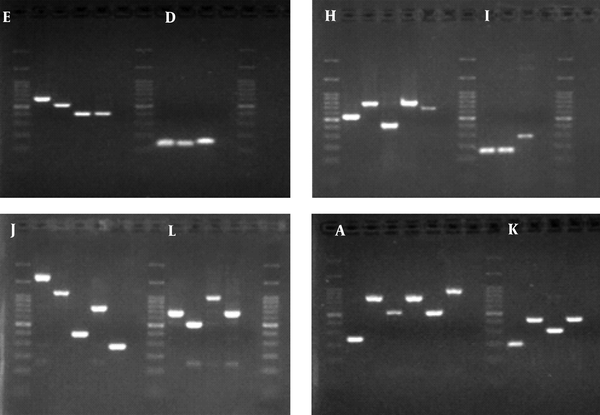 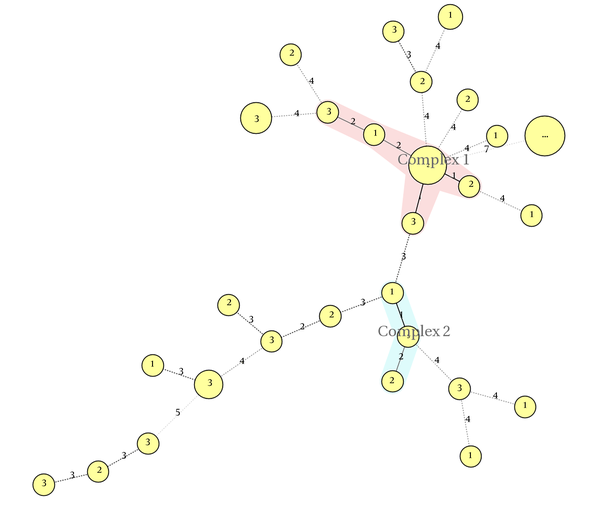 4.3. Evaluation of Clonality in the Studied Isolates

The incidence of CTX-M-type ESBL-producing Klebsiella rapidly increased worldwide. The CTX-M enzymes are classified into five major groups based on CTX-M amino acid sequences. The occurrence of these CTX-M genotypes greatly varies among ESBL-producing isolates geographically (9, 29). Previous studies revealed that CTX-M-1 was the most common one among ESBL gene families (30-33). Forty-two out of 70 ESBL-producing Klebsiella isolates in these study carried CTX-M-1. Molecular typing is a reliable tool to study nosocomial infections. Since in recent years a significant increase of ESBL-producing K. pneumoniae is observed in hospital settings with the risk of outbreak, there is a need for a rapid and low cost typing method (34). Among the various typing methods, PFGE is accepted for typing of bacteria. However, to choose a reliable typing method in laboratory settings, several parameters such as interpretation time, costs, and complexity of performance should be considered. Since PFGE is time-consuming and technically demanding, an alternative method such as MLVA, which is easy-to-perform, cost-effective, and highly reproducible received attention (4-6, 11).

Naseer et al. applied MLVA method for genotyping E. coli carrying CTX-M-type ESBL (11). In the current study, 42 CTX-M-1 producing isolates were included to determine clonal relationship using MLVA method. In the current study, size of PCR products can be easily analyzed on agarose gel without any complicated requirement. Out of a total 42 CTX-M-1-producing K. pneumoniae isolates in the current investigation, MLVA revealed 28 distinct patterns of K. pneumoniae isolates; given that the 28 MLVA genotypes were isolated from three hospitals in one year, it can be concluded that clonal complexes with a small number of isolates in each can indicate the entry of a new bacterium in the ward. The isolates identified as singleton are possibly the bacteria that have entered the ward by the patient, the visitors or medical personnel. These isolates were not established in the ward. The current study findings demonstrated heterogeneity among CTX-M-1-producing K. pneumoniae isolates. Evaluation of diversity indexes for VNTR loci showed that VNTR-J with six different alleles was the most polymorphic and the highest diversity index of 0.807, locus D was the least variable among the current study strains with two alleles and diversity index of 0.475.

The presence of CTX-M-1 in several different MLVA types demonstrated that one specific clone was not responsible for spreading the isolates. It seems that mobility and horizontal transfer occurred among these isolates.