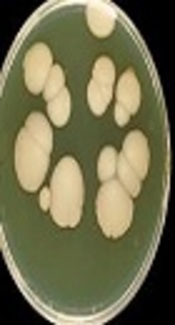 Vulvovaginal candidiasis (VVC) is a frequent infection in females at the reproductive age. Furthermore, the most common causative agent is Candida albicans yet in the recent years, the incidence of non-albicans species has increased.

The main aim of this study was the isolation and identification of various Candida species from patients with vulvovaginal candidiasis by polymerase chain reaction-restriction fragment length polymorphism (PCR-RFLP) in Yasuj, Iran.

The cultures were positive for 160 (51.6%) vaginal samples. Candida albicans (86.8%) was the most common species among the isolates, followed by C. glabrata (3.77%) and C. krusei (3%). Multispecies with two Candida were identified in nine patients.

Vulvovaginal candidiasis is more prevalent among females in Yasuj and the predominant agent is C. albicans. In addition, correct identification of Candida species could play an important role in management and treatment of VVC.

Vulvovaginal candidiasis (VVC) is an usual infection among females, which occurs due to different species of Candida (1). Candida is the second most common cause of vaginal infection after bacterial vaginitis (2). Many reports have suggested that the majority of sexually active females will experience at least one symptomatic vaginal candidiasis during their life; 40% to 50% of these females will experience a second episode and 5% to 10% develop the recurrent form, characterized by three or more episodes in a year (2, 3). Predisposing factors for VVC may include pregnancy, antimicrobial therapy, uncontrolled diabetic mellitus, using of high-estrogen oral contraceptives and hormone drug replacement therapy, use of corticosteroids, cancer chemotherapy, organ transplantation, tight fitting closing, increase in sexual activity, and vaginal douching (4). Symptomatic VVC is characterized by vulvar pruritus, burning, sureness, abnormal vaginal discharge, irritation, and dyspareunia (5, 6). Differential diagnosis of vulvovaginal candidiasis from bacterial vaginitis and trichomoniasis is difficult based on signs and symptoms and leads to suboptimal care (7).

Vulvovaginal candidiasis is most commonly caused by Candida albicans yet in the recent years the rate of infection by non-albicans species, such as C. glabrata, has increased (5, 8). In addition, the correct identification and differentiation of etiological agents is very important for early treatment and preventing of invasion (9). For a long time, traditional microbiological procedures, such as morphology and biochemical methods, were used to identify Candida species, yet these methods are time-consuming, inaccurate to identify, and lacking the necessary validity (10-12). Several DNA-based method, have been developed to improve the identification of fungi species (10, 13). The ITS regions of rDNA contains highly variable nucleotide sequences that have been used for identification of Candida species in the PCR assay. The advantages of PCR-RFLP method for differentiation of Candida species in clinical samples is simple, easy-to-perform, cost-effective, and rapid (11).

The objective of the current study was to identify and determine various species of Candida isolates from females with VVC, using PCR-RFLP for elucidation of epidemiological aspects of vulvovaginal candidiasis.

The ethics committee of the Yasuj University of Medical Sciences approved this study with ethical no.IR.YUMS.REC.1395.29.

This descriptive study was conducted over a period of one year (2016 to 2107) on vaginal samples of patients clinically suspected and diagnosed with VVC that had referred to gynecology and (obstetrics) private midwifery clinics (Yasuj, Iran). The inclusion criteria included living in Yasuj city, being in the menstrual phase, and having an active sexual life while females with pregnancy, and local or systemic treatment for vaginitis were excluded from the study. The samples were collected by sterile cotton swabs from the lateral wall of patients’ vagina and cultured on Sabouraud dextrose agar (Merck, Germany) plates supplemented with 50 mg/L chloramphenicol to avoid bacterial growth and incubated at 35°C for two days. To ensure purity of the isolates, all yeasts were plated on CHROMagar Candida medium (CHROMagar™, Rambach™, AquaCHROM™).

For precise species identification, the extraction and purification of genomic DNA was done from colonies by using previously described methods by Mirhendi et al. (11). Briefly, a loop full of fresh colonies was added to in a 1.5-mL micro tube, containing 300 µL of phenol-chloroform (1:1) solution, 300 μL of lysis buffer (10 mM Tris, 1% SDS, 1 mM EDTA (pH 8), 100 mM NaCl, 2% Triton X-100), and equal to 300 µL of glass beads (0.5 mm in diameter). The suspension was vortexed vigorously for five minutes, centrifuged at 10000 rpm for five minutes, and then the supernatant was transferred to a new tube and re-extracted once more with chloroform. The nucleic acid was precipitated with 2.5 mL volume of cold absolute ethanol and 0.1 mL volume of sodium acetate (pH 5.2) centrifuged at 10000 rpm for 10 minutes at 4°C and the pellets were washed with 300 mL of 70% ethanol, air dried, and finally the pellets rehydrated in 100 µL TE buffer (10 mM Tris, 1 mM EDTA) and were stored at -20°C until use for PCR amplification.

The PCR-RFLP method was carried out according to an already available method, previously described by Mirhendi et al. (11). Briefly, 0.2 µM of each forward ITS1 (5’-TCC GTAGGT GAA CCT GCG G-3’) and reverse ITS4 (5’-TCC TCC GCT TAT TGA TAT GC-3’) universal primers, 1 µL of template DNA, 12.5 µL of premix (Amplicon, Denmark), and enough deionized distilled water up to a final volume of a 25 µL were used for PCR amplification of the ITS1-5.8S-ITS2 rDNA region by thermal conditions according to the following scheme: Initial denaturation during five minutes at 94°C, 35 cycles of amplification consisting of denaturation for 30 seconds at 94°C, annealing for 30 seconds at 58°C and extension for on minutes at 72°C, followed by final extension step at 72°C for seven minutes. To achieve precise strain discriminatory patterns, PCR products were digested in a final reaction volume of 15 µL containing a 10 µL of PCR product, 1U of restriction enzyme MspI (Fermentas, Vilnius, Lithuania), 1.5 µL of relevant buffer, and 3 µL of deionized distilled water at 37°C for two hours. Amplified and digested products were analyzed by agarose gel electrophoresis in TBE buffer (Tris 0.09 M, EDTA 2mM, Boric acid 0.09 M) containing 0.5 µ/mL of ethidium bromide, at 100 V for approximately one hour using 1.5% and 2% agarose gels, respectively. For species identification, the size of the digested fragment was compared with reference band profiles (13). 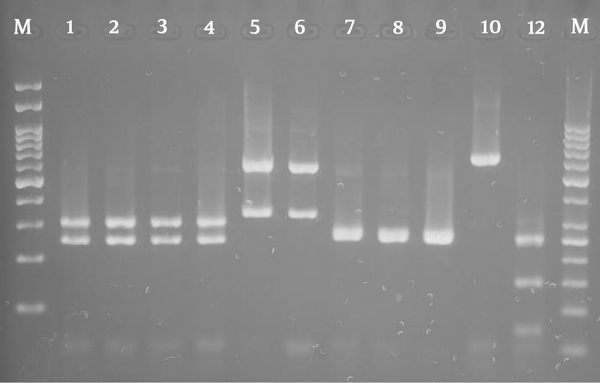 Vulvovaginal candidiasis results from increasing growth of Candida species in the mucous of genital tract and has enlarged extremely in the recent years (14). The PCR-RFLP was used to identify yeast isolated from patients with VVC. The frequency of VVC varied from 5.4% to 84% in reports from Iran and abroad (3, 7, 9, 15, 16). The findings revealed that the prevalence of Candida vaginitis was 160 (51.6%). These results are similar to Mohamadi et al. (17), Hedayati et al. (15), and Rasti et al.’s studies (18). Furthermore, the present study indicated the high rate of VVC in 30- to 40-year-olds, which is in agreement with the study of Mohamadi et al. (17), while it is in contrast with Rezaei-Matekolaei et al. (19).

The prevalence of C. glabrata in this study was 7%, however, this is in contrast to other reported Abu-Elteen and Lakshmi by CHROMagar Candida and conventional mycological methods that reported 32.5% and 11.11% prevalence for C. glabrata, respectively (25). Also, Trama et al. reported a higher rate of C. glabrata species than the current study: 14.3% of 1316 isolates in vulvovaginitis (6). As well as, a report from India indicated that C. glabrata was major agent (50.4%) in VVC (25). The third Candida agent of VVC in the current study was C. krusei (3.1%); the current results are similar to a study conducted by Mahmoudi Rad et al. (20), which reported the rate of C. krusei (4%). Candida kefyr is a rare and unusual cause of VVC as previously reported by Hedayati et al. (8.2%) (15), Rezaei-Matehkolaei et al. (2.9%) (19), and Fornari et al. (2.5%) (26). However, C. kefyr was isolated from only one patient in the current study; the rate of C. kefyr isolation in the present study was 0.65%, which is lower than previous studies mentioned above. The results of this study showed that 5.63% of participants were infected with more than one species of Candida. This finding is in agreement with Mahmoudi Rad et al.’s, which reported the prevalence of mix infection as 10% (20).

Vulvovaginal candidiasis is more prevalent among females in Yasuj and the predominant agent is C. albicans. According to the point that excessive use of antifungal drugs without prescription for treatment of vaginal infection can lead to induction of Candida resistance, correct identification of Candida species could play an important role in treatment of VVC.