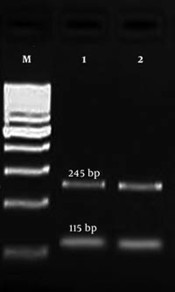 Urinary tract infection (UTIs) caused by Escherichia coli is one of the most common human complications. The discriminate use of antibiotics leads to increasing multiple-drug resistance (MDR) in E. coli.

This study aimed at investigating the frequency of fluoroquinolones resistance by detecting qnr genes and mutation in gyrA gene in clinical isolates of E. coli in the North of Iran.

This cross-sectional study was conducted on 309 E. coli isolates collected from major hospitals in Rasht, North of Iran. All isolates were identified by standard microbiological methods. Antimicrobial susceptibility testing was conducted by the disk diffusion method for the three quinolone antibiotics. The detection of gyrA, qnrS, qnrB, and qnrA genes was performed by the polymerase chain reaction (PCR) method. PCR products of gyrA gene were digested by HinfI enzyme to identify the mutation in gyrA gene by restriction fragment length polymorphism (RFLP) method.

In summary, despite the significant association of the investigated genes with fluoroquinolones resistance in these bacteria, the presence of these genes in susceptible strains suggested that some other possible mechanisms may also influence resistance against fluoroquinolones.

Urinary tract infections (UTIs) are one of the most common human complications, especially among females (1, 2). Several bacteria such as Enterobacteriaceae can cause this complication and Escherichia coli is among the most significant ones (3). This bacterium is responsible for nearly 90% of UTIs among females (4). Often, no single and specific treatment can be found. Sulfonamide, ampicillin, cephalosporins, fluoroquinolones, and aminoglycosides are helpful to treat UTIs (1, 4).

Although the antibiotic resistance rate of E. coli can differ in the diverse geographic area, the discriminate use of antibiotics leads to increasing multi-drug resistance in this microorganism (5, 6). In the last decade, antibiotics such as ampicillin and co-trimoxazole were used to treat infections caused by E. coli, but nowadays, quinolones such as nalidixic acid and ciprofloxacin are replaced. Quinolones are synthetic products with similar structure and mechanism of action (7). Nalidixic acid and some other older quinolones are replaced by the newer fluoroquinolones with broad-spectrum antibacterial activities. Quinolones selectively and reversibly inhibit DNA gyrase subunit A activity and induce the formation of relaxation complex analogue (1, 7). Resistance to quinolones is mainly mediated by a mutation in the subunit A of DNA gyrase on chromosomes (8). In Gram-negative bacteria, topoisomerase IV is a secondary target for quinolones. The qnr genes are responsible for plasmid-mediated resistance to quinolones and prevent the inhibitory effect of these antibiotics on DNA gyrase and topoisomerase (9, 10).

Determination of the resistance rate of E. coli strains to these antibiotics and prescription of proper curative antibiotics can lead to a decrease in the spread of antibiotic-resistant strains (11). Therefore, it is necessary to perform routine national or international surveillance to test antibiotic susceptibility, due to the increasing rate of antibiotic resistance, and extensive changes in the efficacy of some drugs.

The present study aimed at determining the emergence of quinolone resistance and the prevalence of qnr genes, and mutation in gyrA gene in clinical isolates of E. coli isolated in the North of Iran.

This study was in accordance with the declaration of Helsinki and was approved by the local Ethics Committee (Approval No. IR.GUMS.REC.1394.343). All patients’ personal information was kept confidential.

This cross-sectional study was performed from March 2014 to August 2014 on 1723 urine samples of patients with UTIs referred to major hospitals in the North of Iran. All urine samples were cultured on blood agar and Eosin methylene blue (EMB) agar plates and incubated for 24 - 48 hours at 37°C. Oxidase and catalase tests as well as Gram stain were performed on the grown colonies. The colonies were cultured in triple sugar iron agar (TSI), SIM (sulfur, indole, motility), MR-VP (methyl red-Voges Proskauer), urea, Simmon’s citrate, and lysine iron agar (LIA) media and incubated at 37°C for 24 hours. All culture media were purchased from Merck, Darmstadt, Germany.

Antibiogram was performed on colonies of bacteria identified as E. coli by disk diffusion method using three antibiotic disks (MAST, UK) including ofloxacin, norfloxacin, and nalidixic acid according to Clinical & Laboratory Standards Institute (CLSI) guidelines. The diameter of the inhibition zone was measured, and the results were interpreted based on CLSI instructions (12).

In order to study mutation in gyrA gene and the frequency of qnr genes, all chromosomal and plasmids DNA of E. coli strains were extracted by two sets of kits including high pure DNA template preparation kit (Roche, Germany) and gene JET plasmid miniprep kit (Fermentas, Lithuania), respectively based on the manufacturers instructions.

The primers were designed by PrimerPlex (PREMIER Biosoft). The designed primers were ordered to Bioneer Company in South Korea for synthesis. PCR reactions were performed in a final volume of 25 μL containing 10 pmol of each primer, 20 - 50 ng of extracted plasmid DNA, 200 μM of nucleoside triphosphate, and one unit of Taq DNA polymerase. Amplification was performed with pre-incubation (94ºC for four minutes), followed by 35 cycles of denaturation (94ºC for 15 seconds), annealing (60ºC for 10 seconds), extension (72ºC for 15 seconds) and a final extension (72ºC for 10 minutes). The list of used primers is shown in Table 1.

Table 1. Primer Sequences Used for the Amplification of qnr and gyrA Genes

3.6. Amplification of gyrA Gene by PCR

The gyrA gene was amplified using specific primers (Table 1). PCR reactions were performed in a final volume of 25 µL containing 10 pmol of each primer, 1 µg of extracted DNA, 200 µM of nucleoside triphosphate, and one unit of Taq DNA polymerase. Amplification was performed with pre-incubation (94ºC for five minutes), followed by 40 cycles of denaturation (94ºC for 30 seconds), annealing (63ºC for 30 seconds), extension (72ºC for 20 seconds), and a final extension (72ºC for 10 minutes). PCR products of qnr and gyrA genes were electrophoresed on agarose gel containing DNA safe stain. DNAs were visualized under UV light, and band sizes were measured using size marker.

PCR product of gyrA gene was digested by HinfI enzyme to identify the mutation in gyrA gene by restriction fragment length polymorphism (RFLP) method. A point mutation in gyrA gene at ser-83 (T → G) is related to resistance to fluoroquinolones. In wild types, there are two restriction sites for HinfI, and after digestion, three fragments (99, 115, and 146 bp) are produced (13). But, in mutant strains, one restriction site is deleted and only two fragments (115 and 245 bp) are observed (Figure 1). 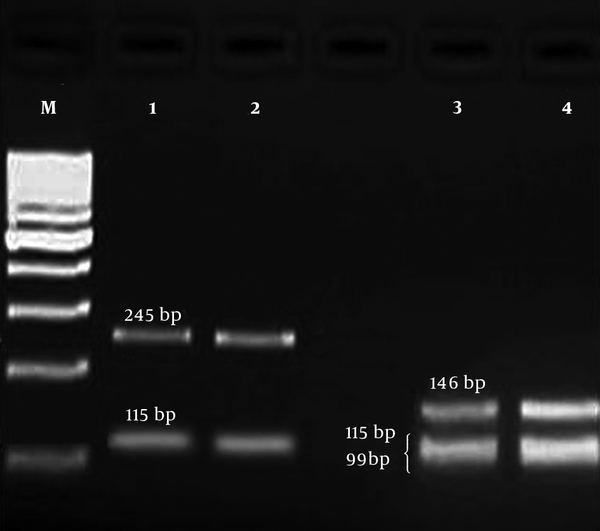 In order to confirm whether the observed bands were related to those genes, PCR products were sent to the Bioneer Company in South Korea for sequencing and sequences were compared using online NCBI/BLAST software.

The analysis was performed using SPSS version 21.0 (IBM Corp., USA). Chi-square or the Fisher exact tests were used to determine the significance of differences. The difference was considered statistically significant if the P value was less than 0.05.

Totally, 309 E. coli isolates were collected from 1723 clinical samples. Out of the 309 isolates, the highest resistance rate was against nalidixic acid (60.2%), and the lowest rate was against norfloxacin (40.5%). The results of antibiotic susceptibility testing are shown in Table 2.

All the clinical isolates were examined for the presence of qnrS, qnrB, and qnrA genes. The highest frequency of qnr genes belonged to qnrB (73.1%). Moreover, 32 isolates (10.4%) had no qnr genes, and nine strains (2.9%) contained all three genes (Figure 2). 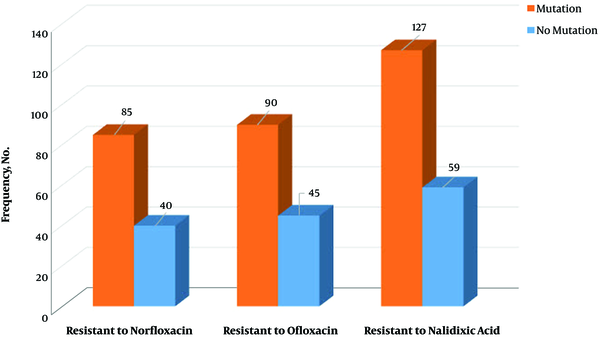 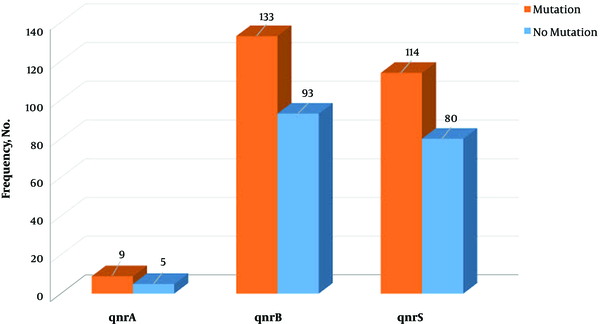 Nowadays, quinolones are frequently used to treat UTIs. Multi-drug resistance microorganisms, particularly extended spectrum beta-lactamases (ESBLs), producing ones, increased in Gram-negative bacteria as a result of the misuse of antibiotics (14-17). The present study aimed at investigating the frequency of quinolone resistance in E. coli strains isolated from patients referred to hospitals in the North of Iran. Out of 1723 samples, 309 E. coli strains were isolated, among which 186 isolates (60.2%) were resistant to nalidixic acid. The result of this study was similar to that of Mansory Jamshidi et al. in Tehran, Iran (18); but resistance rate to nalidixic acid in the current study was higher than those of Alos et al. (19), and Moreno et al. in the United States (20), as well as Alshara in Jordan (21) and Nakhaei Moghadam et al. in Mashhad, Iran (22). The difference between the findings of the study in the United States and those of the current study regarding the resistance rate could be due to supervised drug consumption program and no access to non-prescribed drugs in that country. Although most clinical strains of E. coli in the United States and Canada are susceptible to fluoroquinolones, the strains resistant to these antibiotics are increasing (19).

In the present study, in addition to nalidixic acid, the resistance to two fluoroquinolones such as norfloxacin and ofloxacin was investigated. In this regard, 125 isolates (40.5%) resistant to norfloxacin and 135 isolates (43.7%) resistant to ofloxacin were observed, and norfloxacin was the most effective antibiotic against E. coli isolates in the present study. Goettsch et al. in the Netherlands studied resistance to the antibiotics most commonly prescribed to treat UTIs. From 1989 to 1998, in more than 90,000 E. coli isolates, resistance to norfloxacin increased from 1.3% in 1989 to 5.8% in 1998. Niranjan et al. in Northern India worked on 119 E. coli isolates, out of which 74.2% were resistant to norfloxacin. The reported rate was higher than that of the current study, and resistance to ofloxacin was not investigated in their study (23). Determination of the resistance rate to quinolones is very important since they are frequently used as the drug of choice to treat infections caused by E. coli; and, therefore, inappropriate treatment with these antibiotics can lead to treatment failure.

Authors wish to thank all personnel at Microbiology Laboratory for their technical assistance.

Copyright © 2018, Author(s). This is an open-access article distributed under the terms of the Creative Commons Attribution-NonCommercial 4.0 International License (http://creativecommons.org/licenses/by-nc/4.0/) which permits copy and redistribute the material just in noncommercial usages, provided the original work is properly cited.
download pdf 653.05 KB Abstract XML Get Permission (article level) Import into EndNote Import into BibTex
Number of Comments: 0