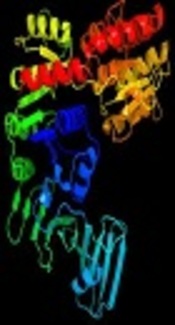 To test whether GtfA and GtfB are conserved among S. pneumoniae isolates presenting with different serotypes and are involved in the glycosylation of PsrP via formation of the glycosyltransferase complex GtfA-GtfB.

Serotyping of S. pneumoniae was performed using polymerase chain reaction (PCR) assays. The evolutionary divergences of GtfA and GtfB among different isolates were estimated using MEGA4 software. The contribution of GtfA and GtfB to the glycosylation of PsrP was identified using an in vivo glycosylation system in Escherichia coli. Interaction of GtfA with GtfB was assessed using a glutathione S-transferase (GST) pull-down assay and yeast two-hybrid experiment.

Nine different S. pneumoniae serotypes were found, of which the most frequent was 19F. The pneumococcal isolate TIGR4 and 22 other clinical isolates were included to estimate evolutionary divergence. The average homologies of the GtfA and GtfB sequences were 99.59% and 98.53%, respectively. Glycosyltransferase A and GtfB were shown to be required for the transfer of N-acetylglucosamine moieties to PsrP1-374. Glutathione S-transferase pull-down assays and yeast two-hybrid experiments showed that GtfA directly interacted with GtfB.

Pneumococcal serine-rich repeat protein homologs include serine-rich adhesin for platelets (SraP) and fimbriae-associated protein 1 (Fap1), which are located on the cell surface of Staphylococcus aureus and S. parasanguinis FW213, respectively; they have also been demonstrated to be glycoproteins (4-8). In S. aureus, a SraP-SecY2A2 island including SraP and seven other genes located downsstream of the SraP was shown to be required for SraP glycosylation and secretion, and glycoslytransferase A (GtfA) and glycosyltransferase B (GtfB) have been shown to be involved in the glycosylation of recombinant SraP (5). In S. parasanguinis FW213, Fap1 and 11 other genes construct a Fap1-SecY2A2 island to regulate the glycosylation and secretion of Fap1, and a Gtf1-Gtf2 complex initiates Fap1 glycosylation (7-9). In S. pneumoniae TIGR4, PsrP and 17 other genes located downstream of PsrP construct a PsrP-SecY2A2 island, and GtfA and GtfB have been found to initiate PsrP glycosylation (2, 10).

In the present study, we aimed to investigate the distribution of serotypes and the prevalence of the PsrP-SecY2A2 island in S. pneumonias isolates, estimate the evolutionary divergence of GtfA and GtfB among different isolates using the MEGA4 software package, construct an in vivo glycosylation system in Escherichia coli to identify whether GtfA and GtfB contribute to the glycosylation of PsrP, and investigate the interaction of GtfA with GtfB using a glutathione S-transferase (GST) pull-down assay and yeast two-hybrid experiment.

3.4.1. Primers and Other Important Reagents

To investigate GtfA and GtfB variations of S. pneumoniae isolates with different serotypes, GtfAB was amplified with an MXP3000® system (Stratagene, USA). The amplification mixture comprised 25.0 μL of 2 × PCR Master Mix (Fermentas, China), 1.0 μL of a couple of primers (10 μM), 2.0 μL of S. pneumoniae chromosomal DNA template, and 22.0 μL of ddH2O. The amplification conditions were as follows: 95°C for 5 min, followed by 35 cycles of 95°C for 0.5 min, 54°C for 0.5 min, and 72°C for 2.5 min, and a final extension for 5 min at 72°C. The amplicons of GtfAB were sequenced directly using Sanger’s DNA sequencing method.

Clustalw 2.0 software was used to perform multiple alignments of the sequences of GtfA and GtfB. Evolutionary divergence in these sequences was estimated using the maximum composite likelihood method in the MEGA4 software package. The neighbor-joining method was used to create a phylogenetic tree and infer evolutionary relationships. The Protein Homology/analogY Recognition Engine (PHYRE) program was used to search for structural homology. The GeneBank database was used to analyze conserved domains of GtfA and GtfB.

Vector pACYCDuet-1(pAC) was used to express GtfA, GtfB, and GtfAB. First, GtfA, GtfB, and GtfAB were amplified from S. pneumoniae chromosomal DNA using PrimeSTAR Max DNA polymerase (TaKaRa Biotech Co., China) and corresponding primers (Appendix 1 in Supplementary File). The cleaved amplicons were ligated with vector pAC to construct pAC-A, pAC-B, and pAC-AB, respectively. Vector pETDuet-1(pET) was used to construct pET-P for the expression of PrsP1-374. The construction of pET-P was similar to that of pAC-A. All of the inserts included in pET and pAC were sequenced using Sanger’s DNA sequencing method.

The coding sequences for GtfA and GtfB were amplified from the extracted bacterial DNA of S. pneumoniae using PrimeSTAR Max DNA polymerase (TaKaRa Biotech Co., China) with primers GtfA EcoRI and BamHI, GtfB EcoRI and BamHI, respectively. PCR products were cleaved with EcoRI and BamHI, and cloned in frame into pGBKT7 (pBD) and pGADT7 (pAD) to construct pBD-A and -B and pAD-A and -B, respectively. Then, GtfA and GtfB were excised from pBD-A and -B by EcoRI and XhoI. The isolated fragments were subcloned in frame into vector pGEX-5X-1 (p5X) to construct p5X-A and p5X-B. All of the resulting constructs were confirmed using restriction enzyme digestion and DNA sequencing.

Escherichia coli BL21 was co-transformed with the pET-P and pAC derivatives listed above. Bacteria were grown on LB agar plates supplemented with 100 μg/mL of ampicillin and 20 μg/mL of chloramphenicol. Bacteria harboring a different pAC derivative and a pET-P were cultured at 30°C to logarithmic growth phase at an OD600 of about 0.6 following added IPTG (final concentration 0.1 mM) to induce the expression of recombinant proteins (5). The bacterial lysates were analyzed by western blotting using monoclonal anti-His antibodies and polyclonal anti-S tag antibodies, respectively (5). Lectin blotting was used to investigate PsrP glycosylation in these bacterial lysates by using sWGA and four other agglutinins labeled with horseradish peroxidase-conjugates (5, 7).

Each pair of pAD and pBD derivatives was transformed into Saccharomyces cerevisiae AH109 using the LiAc Yeast Transformation Procedure (Clontech, USA). The transformed strain AH109 was grown on SD-LTHA agar plates for 48 hours to investigate the interaction between GtfA and GtfB.

Escherichia coli BL21 was cultured at 30°C to logarithmic growth phase at an OD600 of about 0.6, then IPTG (final concentration 0.1 mM) was added into the cultures to induce expression of recombinant proteins for 3 hours. Harvested bacterial pellets were used for the purification of GST-GtfA and -GtfB as previously described (6, 8). Supercoiled DNA with 1 μg of pBD-A and pBD-B was used to produce c-Myc-GtfA and -GtfB fusion proteins using the TnT® Quick Coupled Transcription/Translation System (Promega, USA) (6, 8).

The GST pull-down assays were carried out as previously described (6). The eluted proteins from GST beads were boiled for western blotting with a monoclonal anti-c-Myc antibody.

Table 1. The Prevalence of PsrP, GtfA and GtfB in Different Serotypes of Pneumococcal Isolates

The average homology of the GtfB sequences of TIGR4 and 22 other pneumococcal isolates was 98.43% with a maximum of 100.00% and a minimum of 95.07%, produced by S. pneumoniae 70585. Thirty-two kinds of variation were found in the GtfB sequences of TIGR4 and 22 other pneumococcal isolates, and 6 kinds of variation (G20V, A92V, T127K, P221R, C327R, and A332V) were found between TIGR4 and UN030. The sum of the branch length was inferred to be 0.09 using the neighbor-joining method, which was contributed mostly by SP70585 (Appendix 5C in Supplementary File). The GtfB sequences were also found to be conserved. Therefore, the GtfB of UN030 was used for function prediction. Conserved domain analysis showed that GtfB was most closely related to the GT1 family of glycosyltransferases. The PHYRE program found significant structural similarity in the sequences of GtfB and Gtf2 of S. parasanguinis FW213 (Appendix 5D in Supplementary File).

4.4. Involvement of GtfA and GtfB in the Glycosylation of Recombinant PsrP1-374

To investigate whether GtfA and GtfB of UN030 contribute to the glycosylation of PsrP, E. coli was used to construct an in vivo PsrP glycosylation system. Recombinant PsrP1-374 was used as the glycosyltransferase substrate, and GtfA and GtfB were used as the glycosyltransferases. In this system, the individual expression of PsrP1-374 or co-expression of PsrP1-374 and GtfA or GtfB led to the production of a PsrP1-374 doublet when probed with anti-S tag antibody (Figure 1B, lanes 1, 3, and 4). The co-expression of GtfA, GtfB, and PsrP1-374 produced a PsrP1-374 doublet of higher molecular weight and slower migration rate (Figure 1B, lane 2). The PsrP1-374 band with the slower migration rate bound to N-acetylglucosamine (GlcNAc)-specific lectin sWGA (Figure 1C, lane 2) rather than any of the four other lectins, including Ulex europaeus agglutinin I, peanut agglutinin, Dolichos biflorus agglutinin, and concanavalin A, which bind specifically to fucose, galactose, N-acetylgalactosamine, and glucose (or mannose), respectively. It was concluded that PsrP1-374 was only glycosylated by the GlcNAc moieties in E. coli. This finding verifies that both GtfA and GtfB of UN030 are glycosyltransferases and required for the glycosylation of recombinant PsrP1-374 in the E. coli glycosylation system. 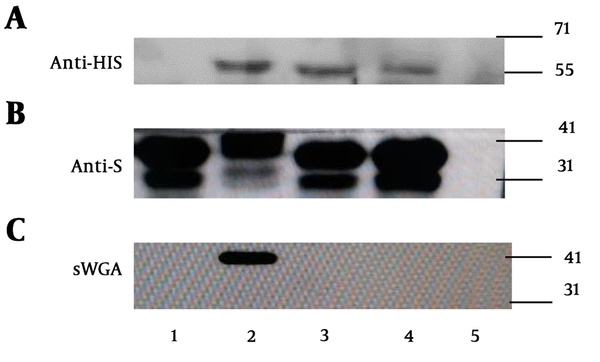 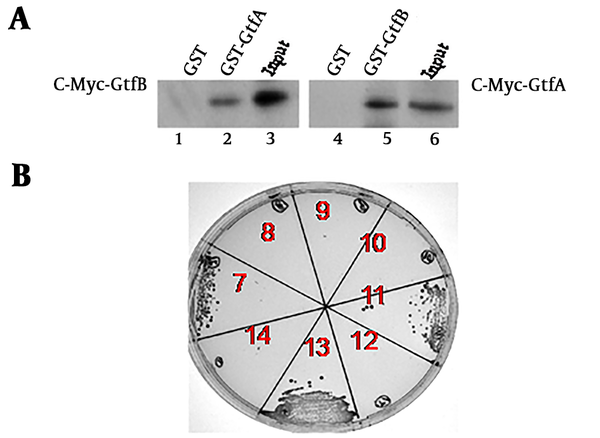 Figure 2. GtfA interaction with A, GtfB tested by in vitro GST pull-down assays; B, by yeast two-hybrid experiments.

In this study, GtfA, GtfB, and PsrP were found in 36.17% of the collected S. pneumoniae isolates, which is different from a recent finding that PsrP was present in 51.7% of invasive S. pneumoniae isolates and in 48.3% of carrier S. pneumoniae isolates (15), indicating there are regional differences in the prevalence of GtfA, GtfB, and PsrP. Because GtfA, GtfB, and PsrP are not present in about 50% of clinical isolates of S. pneumoniae, a PsrP-SecY2A2 island is not essential for S. pneumoniae growth. Nine serotypes were identified in 91 clinical isolates and the most frequent serotypes were 19F, 19A, 6A/B, and 23F, similar to the recently reported findings (12). The highest prevalence of PsrP was found in serotype 14, whereas no PsrP-positive isolate was found in serotypes 1 and 3 in the present study. Selva et al. reported that PsrP was present in 80.15% and 9.52% of isolates of serotype 1 and serotype 3, respectively (15). In this study, only 6 isolates were identified as serotype 1 or 3, indicating that an insufficient number of isolates caused PsrP-negative findings in serotypes 1 and 3. Therefore it is concluded that the presence of a PsrP-SecY2A2 island is not associated with a certain serotype.

To verify the deduction that GtfA and GtfB of UN030 are glycosyltransferases, E. coli served as a scaffold for constructing an in vivo PsrP glycosylation model. The expression of S-tag-fused PsrP1-374 in E. coli was probed with anti-S-tag polyclonal antibodies. Co-expression of PsrP1-374 with GtfA and GtfB in E. coli resulted in two bands with higher molecular weight and slower migration rate. Only the PsrP1-374 band at the ~50-kD position with a slower migration rate was capable of binding to sWGA. These results demonstrate that GtfA and GtfB are glycosyltransferases that transfer GlcNAc moieties to the peptide backbone of PsrP in S. pneumoniae strain UN030, which strongly supports the previous findings that mature PsrP is glycosylated by GlcNAc, and GtfA and GtfB are required for transferring GlcNAc to the peptide backbone of PsrP in S. pneumoniae strain TIGR4 (2, 3).

In the present study, neither GtfA nor GtfB had the ability to transfer GlcNAc moieties to the peptide backbone of PsrP, as probed with lectin sWGA. Therefore, it is reasonable to deduce that GtfA interacts with GtfB and forms the glycosyltransferase complex GtfA-GtfB, which is required for the glycosylation of PsrP. GtfA interaction with GtfB was demonstrated using the in vitro GST pull-down assays and yeast two-hybrid analyses in the present study. Supporting these results, yeast two hybridization and GST pull-down also revealed that Gtf1 interacted with Gtf2 in S. parasanguinis FW213. Moreover, a significant structural similarity was found between GtfA and Gtf1, as well as GtfB and Gtf2 (7, 9). Therefore, it is concluded that GtfA interacts with GtfB and forms the enzyme complex GtfA-GtfB with GtfB, which is required for PsrP glycosylation in S. pneumoniae. In addition, these findings also explain why the activity of the mixture of GtfA and GtfB was 100-fold higher than that of the individual GtfA (10).