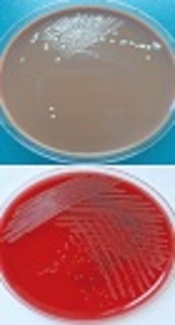 It is the first reported case of CNS Nocardia terpenica infection in a patient without abscess formation in the CNS. Additionally, this patient also had a complex infection involving Exiguobacterium profundum bacteremia.

Central nervous system (CNS) infection is a major cause of morbidity and mortality in chronically immunosuppressed patients. Bacteria, viruses, fungi, and parasites are the main culprit pathogens. Conventional bacterial CNS infections were almost secondary to bacteremia (1). Nocardia is a kind of rod-shaped, catalase-positive bacterium, and variable by Gram stain. It belongs to partially acid-fast bacteria. Nocardia contains a total of 85 species, including non-pathogenic and pathogenic strains (2). Nocardia species are rarely found in CNS infections; however, they are generally known to cause cutaneous, pulmonary, or systemic nocardiosis. Brain abscess is the main clinical manifestation of CNS nocardiosis with bad prognosis.

To date, CNS nocardiosis was reported to be caused by Nocardia asteroides, N. farcinica, N. otitidiscaviarum, and N. paucivorans. The strain of N. terpenica was first isolated from a patient with lung nocardiosis in Japan (3); however, it has not been found in cerebrospinal fluid (CSF). In addition, CNS nocardiosis, together with bacteremia, is rare, especially when the bacteremia is caused by a kind of rare species, such as Exiguobacterium spp. Exiguobacterium spp. belongs to Gram positive bacillus, and was first described in 1983 by Collins et al. (4). It is a group of coryneform, facultative anaerobic bacteria. A few cases of Exiguobacterium bacteremia and skin infection were reported before (5-9), due to its low pathogenic potential. In our case, we identified Exiguobacterium profundum, which has not been isolated from the bacteremia patients before. Although CNS nocardiosis, together with Exiguobacterium bacteremia is unusual, the complex infection would be fatal. Therefore, we would like to share the case that we hope could provide useful information for future diagnosis and treatment.

A 53-year-old female was admitted into the department of infectious diseases in our hospital on June 6th, 2017, after a fever of over 41°C for 20 days and obnubilation for half a day. This patient had a history of nephrotic syndrome for more than two years, and had been taking prednisone for the past one year (started with 50 mg/day, then gradually decreased to 27.5 mg/day until recently. Four days before her admission prednisone was withdrawn. Besides, this patient also had a long history of diabetes and had been taking oral hypoglycemic agents to manage her high blood glucose level; however, the management was undesirable. Physical examination showed a rigid neck and positive Brudzinskin, Kernig, and Barbinski sign.

Some whitish stuff was seen attached to the surface of her tongue, and pharyngeal swab revealed a few hypha and spores, and Gram (-) rods (1+). Lab tests indicated an elevated level of WBC count (14.31 × 109 /L with neutrophil % 80%↑), PCT (1.79 ng/mL↑), CRP (113 mg/L↑), and ESR (107 mm/h↑) suggesting bacterial infection. Biochemistry panel of her CSF after admission exhibited a glucose level of 4.09 mol/L↓ (< 1/3 of her concomitant blood glucose level), chloride of 114.9 mmol/L↓, and protein level of 1882 mg/L↑. Computed tomography (CT) scans of her chest only showed a small amount of effusion in both sides of the chest cavities without other obvious indications of pulmonary infection. A head MRI scan without contrast was normal. With these results, tuberculous meningitis was empirically considered, and diagnostic treatment regimen was prescribed on June 9th including moxifloxacin (0.4 g i.v. QD), isoniazid (600 mg i.v./300 mg PO, QD), rifampicin (450 mg PO, QD), pyrazinamide (500 mg PO, TID), and ethambutol (750 mg PO, QD). However, after one week’s anti-TB treatment, this patient’s condition and CSF parameters didn’t show any sign of improvement (Figure 1). 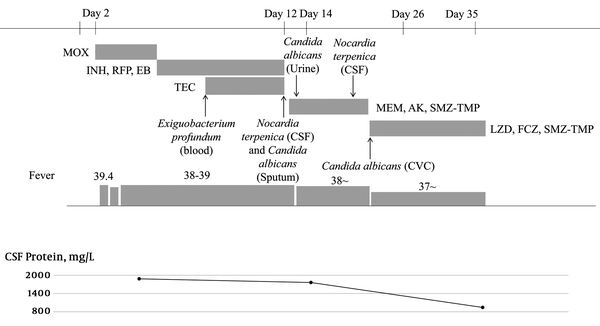 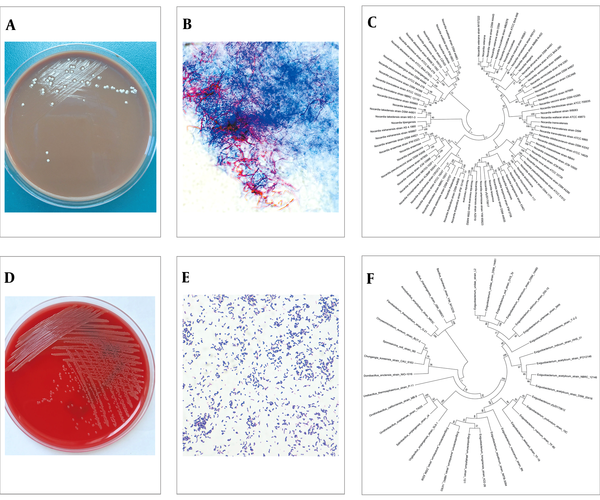 Interestingly, the CSF culture was alarmed at day 5 after inoculation. With the same methods as above, an irregularly shaped colony with a slightly serrated border was observed in BA and CA plates after 48 hours’ culture, and white aerial hyphae grew out from these colonies after another 3 to 4 days’ incubation at 35°C, 5% CO2 atmosphere. Colonies were further examined by Gram and fast-acid staining and Gram positive, partially-acid-fast branched rods were identified. In combination of the morphology of colonies and the staining results, especially the partially-acid fast staining results, the diagnosis of Nocardia species infection was made. Nocardia terpenica was further confirmed by 16s rDNA sequencing (Figure 2A, B, and C). In addition, this isolate was found to be susceptible to a wide range of antimicrobial agents including amikacin, amoxicillin-clavalomic acid, ceftriaxone, ciprofloxacin, imipenem, linezolid, TMP-SMX, cefepine, cefotaxime, and gentamicin (10).

At this point, the diagnosis was amended to nocardiosis meningitis together with E. profundum bacteremia. Accordingly, the treatment regimen was adjusted to meropenem (2 g, i.v. Q8h) and amikacin (0.4 g, i.v. QD) in combination with sulfamethoxazole and trimethoprim (SMZ-TMP, 2 pills PO BID, each pill contains 80 mg of TMZ and 400 mg of SMZ) on June 16th. At this point, lumber puncture was repeated and CSF routine and biochemistry panel did suggest CNS bacterial infection (glucose 2.63 mmol/L, < 1/3 of her concomitant blood glucose level, chloride 116.3 mmol/L, protein 1762 mg/L). After adjusting antibiotic treatment regimen, this patients’ condition began to improve and her temperature gradually decreased, however, it lingered around 38°C. On June 24th, eight days after the start of meropenem and amikacin, this patient still had a fever of 38°C, treatment regimen was then adjusted to linezolid (600 mg i.v. Q12h) and SMZ-TMP (5 pills/day) in combination of fluconazole (200 mg, i.v. QD).

The reason why fluconazole was added is that Candida albicans was isolated from sputum (June 17th), urine (June 21st) and deep venous catheter (June 24th). This patient responded very well to this regimen change and her temperature returned to normal the next day after the start of the new treatments. With time going by, she didn’t have a fever anymore and became better. Fluconazole was used for two weeks and was withdrawn on July 7th. Before she was discharged another lumber puncture was conducted and CSF parameters were significantly improved as shown by normal glucose (2.74 mmol/L, concomitant blood glucose level 4.52 mmol/L), chloride (122.1 mmol/L), and decreased protein level (942 mg/L). SMZ-TMP (5 pills/day) and linezolid (600 mg PO, BID) was prescribed for continuing treatment after discharge and follow-up was scheduled for this patient in the clinic.

Complex infection with multiple different pathogens in different locations of the body, especially one of the pathogens being a rare one, often poses the victim to an increased risk of mortality. Here, we presented a case of N. terpenica meningitis together with E. profundum bacteremia. Fortunately, our patient was eventually recovered. Nocardia species are aerobic actinomycetes existing in soil, sand, and dust. The bacteria could form irregular branching colonies in agar, and are characterized as Gram-positive, partially-acid-fast branched bacillus. Nocardiosis commonly occurs in lung, skin, and CNS. Immunocompromised patients, especially those with deficient cell-mediated immunity such as patients with AIDS or lymphoma and those having long-term immune suppressive therapy are very susceptible to Nocardia species infection.

Nocardiosis can also be seen in diabetic patients and those taking long-term broad spectrum antibiotics (11, 12). Previous reports indicated that brain abscess was found in a majority of patients with CNS nocardiosis and the mortality of CNS nocardiosis was high reaching 30% - 50% (13-15). Trimethoprim-sulfamethoxazole, minocycline, amikacin, imipenem, and cefotaxime are the most frequently used antibiotics for the disease. Our patient first received SMZ-TMP, meropenem, and amikacin. Although her condition was improved and temperature was decreased, her fever was not completely gone and lingered around 38°C. When we changed the regimen into linezolid and SMZ-TMP in combination of fluconazole, the fever was gone and she was on the way to recovery.

There were several issues here worth of discussion. First, since the in vitro drug susceptibility test indicates that the N. terpenica isolate is sensitive to SMZ-TMP, meropenem, and amikacin, will continuation of this regimen also recover our patient considering Nocardia species are slow growing bacterial? Secondly, is Candida albicans infection the last straw contributing to the fever this patient had left after anti-nocardiosis therapy? Third, is linezolid more potent than meropenem and amikacin in vivo against CNS infection of N. terpenica in our patient? Since this is a single isolated case, answers to the above questions will probably never be acquired. The desirable duration of antibiotic therapy for nocardiosis remains inconclusive. It is suggested that patients with nocardiosis, especially those immunocompromised patients, should receive appropriate antibiotic treatment for the duration varying from 6 to 12 months. CNS nocardiosis will normally need a longer time to clear the infection.

The brain abscess that is found in nocardiosis meningitis may contribute to the high mortality rate in affected patients. Interestingly, no abscess was found in our patient, which may be one of the reasons of her survival. An early start of anti-tuberculosis therapy is probably another reason of her survival. Due to a high prevalence of tuberculosis in China and tuberculosis meningitis-like change of her CSF from her first lumber puncture after admission, this patient started the regimen against tuberculous meningitis empirically. Although there is no evidence suggesting that anti-tuberculosis drugs could be used for the treatment of nocardiosis, it was possible that these drugs, especially moxifloxacin could inhibit the growth of Nocardia in the CNS.

Absence of abscess formation and relatively benign clinical course in our patient may suggest that N. terpenica is not a very virulent strain of Nocardia species, which may be explained by the finding that evolutionarily N. terpenica is far away from those highly virulent strains such as N. asteroides, N. farcinica, N. otitidiscaviarum, and N. paucivorans (Figure 2C) (16, 17). It has been pointed out that Nocardia meningitis is difficult to diagnose due to the fact that CNS nocardiosis is relatively infrequently seen in clinics; in addition, Nocardia species grow very slowly making the diagnosis be missed sometimes. In our case the same Nocardia strain was isolated twice from the CSF samples of two different time points, suggesting the patients that are highly suspicious of Nocardia species infection have a longer incubation time of their specimen than standard bacterium culture is needed.

Exiguobacterium is a Gram positive bacillus belonging to Firmicutes. It was first described by Collins et al., when it was isolated from an alkaline potato processing plant (4). In 2007, Pitt et al. reported that E. aurantiacum was isolated from the blood of six patients, and among these six patients three were diagnosed with myeloma (8), suggesting that Exiguobacterium could cause bacteremia in immunocompromised patients, as is shown in our case.

In conclusion, it is the first reported case of CNS N. terpenica infection in a patient without abscess formation in the CNS. Additionally, this patient also had a complex infection involving E. profundum bacteremia. In this case, not only is treatment information provided, our data emphasize the importance of applying molecular biology methods in the diagnosis of pathogen infection is also provided. The accession numbers are: N. terpenica (MF417548) and E. profundum (MF423088)

Copyright © 2018, Author(s). This is an open-access article distributed under the terms of the Creative Commons Attribution-NonCommercial 4.0 International License (http://creativecommons.org/licenses/by-nc/4.0/) which permits copy and redistribute the material just in noncommercial usages, provided the original work is properly cited.
download pdf 2.69 MB Get Permission (article level) Import into EndNote Import into BibTex
Number of Comments: 0