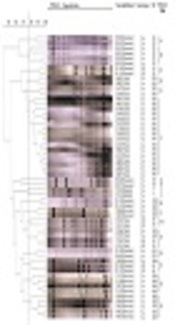 Streptococcus agalactiae is a serious zoonotic pathogen that causes disease in humans and other animals worldwide.

We found that two serotypes (Ia, III) existed, with serotype Ia being the most common (85.7%). The 56 isolates were assigned to nine sequence types (STs) and seven clonal complexes (CCs) using MLST. The most common ST was ST891 (35.7%). The ST19 and ST103 were found in two different isolates, while the remaining STs were found in one isolate. A total of 18 PFGE clusters were identified, however, only cluster P was found in both human and bovine isolates.

Our findings suggest that serotypes, STs and PFGE, had no obvious correlation with particular host species. However, the similarity of genotypes of S. agalactiae isolated from different host species, speculating cross-infection possibility between them at genetic level.

Streptococcus agalactiae, or group B Streptococcus (GBS), is a Gram positive coccus with global distribution (1, 2). Streptococcus agalactiae cause neonatal meningitis in humans, mastitis in cattle, acute sepsis in rabbits, and meningoencephalitis as well as septicemia in fish (2-4). The capsular polysaccharide is contributing to the pathogenicity of S. agalactiae and it is useful in bacterial genotyping (5). Ten distinct capsular polysaccharide serotypes have been reported (Ia, Ib, II - IX) (6). Serotypes Ia and III are believed to be the most common and have the capability of infecting multiple host species (7, 8).

Serotyping alone may be insufficient to fully characterize isolates from different host species. Multilocus sequence typing (MLST) and pulsed-field gel electrophoresis (PFGE) can provide a more robust analysis to investigate the genetic diversity of pathogen isolates (9-11). The MLST technique classifies the bacterial sequence types based on approximately 500 bp of seven housekeeping genes (12), which is due to the fact that they are varied over an evolutionary time scale (13). In contrast, PFGE discriminates among sequence types by analyzing diversity of genomic DNA digested with Sma I restriction enzyme (14).

In this study, it was aimed at determining the serotype diversity and molecular typing population structure of S. agalactiae isolated from human, bovine, rabbit, and fish by capsular polysaccharide serotyping, multilocus sequence typing, and pulsed field gel electrophoresis.

The entire experimental procedure was approved by the Committee of the Ethics on Animal Care and Experiments at Sichuan Agricultural University and was carried out in accordance with the approved guidelines.

A total of 56 strains identified as S. agalactiae from our lab (Center of Fish Disease at Sichuan Agricultural University, China) were used in this study. These samples were isolated from human (n = 16), bovine (n = 12), rabbit (n = 2), and fish (Schizothorax prenanti n = 6, Tilapian = 10, Schizo pygopsispylzovi n = 10). Streptococcus agalactiae ATCC51487 was used as a control. Fish isolates were grown at 28°C over 48 h in brain heart solid medium (OXOID, CM1135, Basingstoke, Hampshire, England), while human, bovine, and rabbit isolates were grown at 37°C for 24 h in brain heart solid medium. All strains were confirmed by Gram stain, morphology, and 16S rRNA sequencing. We identified the cfb gene, which encodes the CAMP factor for S. agalactiae, by polymerase chain reaction (PCR) and sequencing: Forward primer (5′-AGCTTAGTTATCCCA AATCCCAT-3′) and reverse primer (5′-GTGCCAACCCTGAGACAGTT-3′) (17).

Genomic DNA was extracted from each isolate by TIANamp bacteria DNA kit (TIANGEN Biotech Inc. Beijing, China). Collected DNA was washed and dissolved in 25 µL of buffer TE and stored at 4°C. The capsular polysaccharide serotypes were identified by multiplex polymerase chain reaction using the method of Imperi (6).

MLST was performed based on seven housekeeping genes, primers are listed in Table 1 (18). The 25 µL PCR reaction system was: 12.5 µL 2 × Taq PCR Master Mix, 1.0 µL of each primer, 2 µL DNA template, and 8.5 µL distilled water. The PCR amplification procedure was: 5 min at 95°C, 33 cycles at 95°C, 55°C, 72°C for 45 s, and one cycle at 72°C for 10 min. The PCR products were sequenced using the primers listed in the Table 1 and the sequences were submitted to the S. agalactiae MLST database to determine the allele numbers and sequence types; the new sequence types (STs) were submitted to PubMLST website. The eBURST algorithm (19) was performed to infer the hypothetical phylogenetic relationship among STs.

Table 1. The Relevant Experimental Parameters of the Housekeeping Gene Locus of Streptococcus agalactiae.

The PFGE was performed according to the method described by Chen (20), with slight modifications. Major steps included: S. agalactiae cells cultured in brain heart infusion broth for a mid-logarithmic phase were harvested and resuspended in solution buffer (100 mM Tris-HCl, 100 mM EDTA, PH 7.6); S. agalactiae cells were digested with 10 mg/mL lysozyme, 20 mg/mL proteinase K, and 1mg/mL mutanolysin (TaKaRa Biotechnology Co. Ltd. Dalian, China); mix up the bacterial suspension of equal parts 1.5% melting agarose (Bio-Rad Laboratories. Beijing, China); genomic DNA was digested with 50 U of restriction endonuclease Sma I (Thermo Fisher Scientific. Chengdu, China) at 37°C for 30 min; electrophoresis was performed in CHEF Mapper® XA (Bio-Rad Laboratories. Beijing, China) with a pulse ramping between 10 - 20s at 14°C for 18 h and 6 V/cm. The PFGE results were analyzed using Quantity One v.4.62 (Bio-Rad Laboratories. Beijing, China) and a dendrogram was created from a matrix of band matching using the unweighted pair group method with the arithmetic means analysis. PFGE cluster was made based on a threshold of 77% similarity.

All isolates were identified as S. agalactiae, according to species-specific PCR. Our 56 S. agalactiae isolates belonged to two serotypes (Ia and III); serotype Ia was the most common (85.7%; fish n = 22, human n = 12, bovine n = 12, rabbit n = 2). Fish and human isolates possessed of both serotypes, while bovine and rabbit isolates solely belonged to serotype Ia.

The PFGE results indicated that a total of 18 different PFGE patterns were obtained in these isolates (Figure 2), among which four isolates showed an individual PFGE profile. Sixteen fish isolates belonging to ST891 showed an identical PFGE profile, which was the most prevalent. Meanwhile, the PFGE diversity of human isolates was even larger than that observed in other host isolates. The cluster P was found in human and bovine isolates. The rest of PFGE clusters contained one kind of isolate. Categorical analysis revealed that the PFGE clusters were independently distributed in single source of isolate, except cluster P. 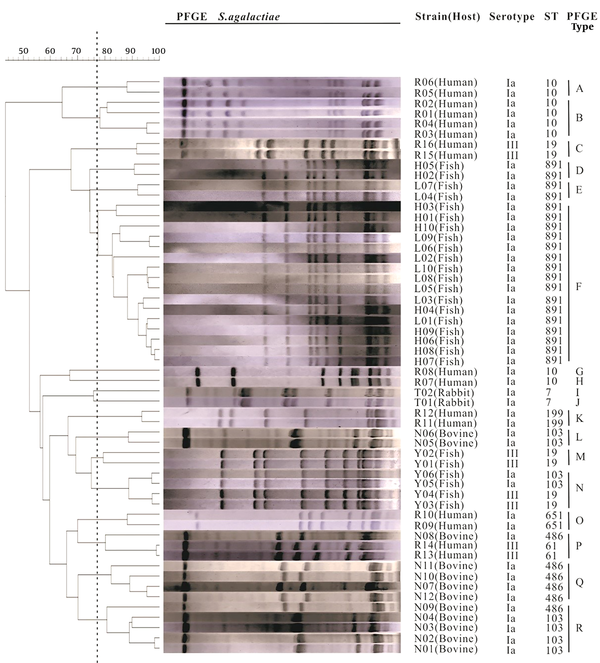 Figure 2. Dendrogram of the PFGE data of the 56 S. agalactiae strains

Cluster analysis was performed with quantity one software (Bio-Rad Laboratories) by using the UPGMA method. The 56 S. agalactiae strains are divided in 18 clusters as defined by the vertical dotted line. The serotype and ST data are plotted next to the dendrogram.

Comparative analysis of the molecular characteristics of S. agalactiae strains isolated from different hosts was investigated (1, 15). However, the genotyping diversity of S. agalactiae isolated from different host species in China was unclear. In this study, two serotypes were identified, including Ia (n = 48, 85.7%) and III (n = 8, 14.3%). This result corresponds with some reports that serotypes Ia and III are the predominant serotypes of S. agalactiae (21, 22), and illustrates the relatively simple serotype population structure in China. Bovine and rabbit isolates belonged to serotype Ia, while human and fish isolates were mostly serotype Ia with a few cases of serotype III.

MLST analysis showed that a total of nine STs and seven CCs were identified. Among them, a novel STs (derived from fish) was found and submitted to the S. agalactiae MLST database. This ST (ST891) was the most common (n = 20, 35.7%) among isolates. Isolates from different hosts could be classified into different clonal complexes, except CC103, which possessed three STs (ST103, ST486, ST651) detected in human, bovine, and fish isolates. Sixteen human isolates had several sequence types including ST19, ST61, ST10, ST199, and ST651. In contrast, the two rabbit isolates belonged to ST7, which was the first time to be confirmed. A total of 18 PFGE types were identified in this study. Each cluster was associated with a single isolate source, except the cluster P, which contained human and bovine isolates. However, isolates from different hosts still presented quite dramatic PFGE typing diversity. The PFGE result in this study is in line with a previous observation (23) where S. agalactiae isolated from different hosts exhibit high genetic diversity and few relationships.

Additionally, the serotypes had no obvious correlation with STs and PFGE types. The genetic analysis showed that isolates of serotype Ia were distributed in different STs and PFGE types. Serotype III included both ST19 and ST61, which was also grouped in four clusters (C, M, N, P). Furthermore, the same ST/CPS type could be grouped in different PFGE patterns. For example, ST103/Ia contained isolates from bovine (n = 6) and fish (n = 2), and was grouped in two different PFGE clusters (L and R). In addition, the ST19/III contained isolates from human (n = 2) and fish (n = 4) and were grouped in cluster C and N. Therefore, the bovine-fish isolates of ST103/Ia and the human-fish isolates of ST19/III may not be able to infect each other. This finding contradicts previous research suggesting that serotype III in human strains can infect fish (10). Additional research is needed for investigating the possibility of S. agalactiae isolated from human, rabbit, bovine, and fish cross infecting. If cross-infection is possible, future research should attempt to identify the responsible genes, which could lead to gene-editing therapies that limit zoonotic transmission.

Our results showed that serotypes, STs, and PFGE profiles had no obvious correlation with 56 isolates from a range of different hosts. The results also revealed that serotype Ia was the preponderant type of S. agalactiae isolated from four kinds of host species in China. The genetic diversity and clonal population structure were evaluated by MLST and PFGE. Nine ST and seven CC were obtained, among which ST651 from the human was a single-locus variant for ST103 from cattle, this suggested more possibilities for cross infection at genetic level. In the future, cross-infection possibility for S. agalactiae strains isolated from human, rabbit, cattle, and fish will be confirmed.

This research was supported by the Sichuan Key Research and Development Project (No 2018NZ0007) as well as the Sichuan Innovation Team Project of Agricultural Industry Technology System (No.2017SICAD002). We thank Matthew Gray (University of Tennessee) for comments on a previous version of this manuscript.