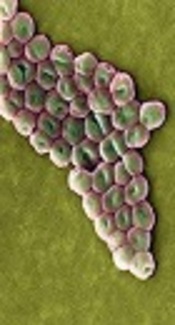 Understanding of the biological factors responsible for prevalence and persistence of Acinetobacter baumannii in hospital settings is critical to prevent and control the corresponding nosocomial infections.

This study was conducted to investigate whether the biofilm-forming ability is associated with the emergence of different antibiotic resistance phenotypes [multidrug resistance (MDR)/extensively drug resistance (XDR) and non-MDR] of A. baumannii.

The capacities of biofilm formation in 80 clinical A. baumannii strains isolated from hospitalized burn patients in Bushehr, Iran, were assessed using the crystal violet staining.

Given that non-MDR A. baumannii isolates in major IC types were observed to form a strong biofilm compared to MDR/XDR ones, it seems that biofilm may play a key role in the persistence and survival of A. baumannii isolates with an inadequate level of antibiotic resistance. Furthermore, the results showed that the relationship between biofilm and antibiotic resistance phenotypes might be affected by the IC types (major IC types or IC variants).

Acinetobacter baumannii is one of the most common causes of nosocomial infections. The high emergence rates of multidrug resistance (MDR) and extensively drug resistance (XDR) among A. baumannii isolates have led them to be considered as one of the top seven pathogens posing threats to medical and health systems (1, 2). In addition to antibiotic resistance, biofilm formation is another characteristic leading to the survival of A. baumannii in the presence of antibiotics and high stresses (1-3). It was revealed that the difference in biofilm formation capacity among international clonal (IC) types of A. baumannii could affect the spreading of this microorganism (4).

The present study was conducted to investigate the potential relationship between antibiotic resistance phenotypes and biofilm formation capacity and the impact of IC types on this relationship in clinical A. baumannii isolates.

The present research was approved by the ethics committee of Bushehr University of Medical Sciences (code number: B-92-15-18).

Totally, 80 clinical A. baumannii strains were isolated from the burn wound of the hospitalized patients in the burn unit of a medical center complex in Bushehr, Iran. The clinical strains were determined and validated as A. baumannii using the API20NE system (bioMerieux, Marcy-l’Etoile, France) and multiplex PCR for the gyrB cluster, respectively (8).

The minimum inhibitory concentration (MIC) of amikacin, ampicillin-sulbactam, cefotaxime, ceftazidime, cefepime, ceftriaxone, ciprofloxacin, gentamicin, piperacillin, ticarcillin, imipenem, meropenem, piperacillin-tazobactam, tobramycin, tetracycline, minocycline, and trimethoprim/sulfamethoxazole was determined using Etest strips (Liofilchem, Italy) and the results were interpreted according to the CLSI guidelines (11). Clinical A. baumannii isolates were categorized into XDR, MDR, and non-MDR according to the international expert proposal for interim standards guidelines (12), as follows: XDR was defined as acquired resistance to ≥ 1 agent in all but ≤ 2 categories, MDR as resistance to ≥ 1 agent in ≥ 3 antimicrobial categories and, non-MDR as resistance to 0 - 2 antimicrobial categories.

The biofilm-forming capacity was quantified using the crystal violet staining technique in triplicates and at three independent replicates, as previously defined (6). Briefly, after overnight culture of A. baumannii on nutrient agar, one colony was isolated and suspended in Luria Bertani (LB) broth (Himedia, India). A 200-µL 0.5 McFarland suspension was incubated in each well of a 96-well plate at 35°C. After 48 hours, the culture medium was removed and the wells were washed three times with dH2O. Following incubation with 1% crystal violet dye (200 µL/well) at 25˚C for 20 mintues, the wells were washed twice with dH2O and dried. Finally, 95% ethanol (200 µL/well) was added and optical absorbance was measured at 550 nm (Thermo Scientific GmbH, Driesch, Germany). The reference A. baumannii ATCC 19606 strain and LB medium were considered as positive and negative controls, respectively. In the present study, an OD550 value greater than the negative control was defined as biofilm positive. Strains with OD550 values higher than the negative control and less than the reference strain were used to describe weak biofilm producers, while a D550 value greater than the reference strain was considered as robust biofilm producers.

The growth rate of 20 isolates (including 10 strong and 10 weak biofilm formers) was compared with that of A. baumannii ATCC19606 as the reference strain (13). Overnight cultured isolates were diluted 1:100 in LB medium and incubated at 37°C with shaking at 200 rpm for 24 hours. the bacterial growth was assessed every hour by measuring the OD600 values. All tests were performed in triplicate for each strain.

4.1. Identification and Antimicrobial Susceptibility of Clinical A. baumannii Isolates

All 80 clinical strains were determined and validated as A. baumannii using the API20NE system and multiplex PCR for the gyrB cluster, respectively. Antimicrobial susceptibility proﬁles of all A. baumannii isolates are presented in Figure 1. The highest susceptibility was found to colistin (100%), followed by tigecycline (94%), minocycline (73%), and tetracycline (51%). The resistance rates against the other study antimicrobials, except for cephalosporins (which were higher than 80%), were lower than 60%. Of the 80 A. baumannii isolates examined, 77 isolates exhibited resistance to at least one antibiotic. 33 and 17 isolates (41% and 21%) showed the XDR and MDR phenotypes, respectively. The remaining 34% exhibited the non-MDR phenotype.

Antibiotic resistance rates of all A. baumannii strains in this study 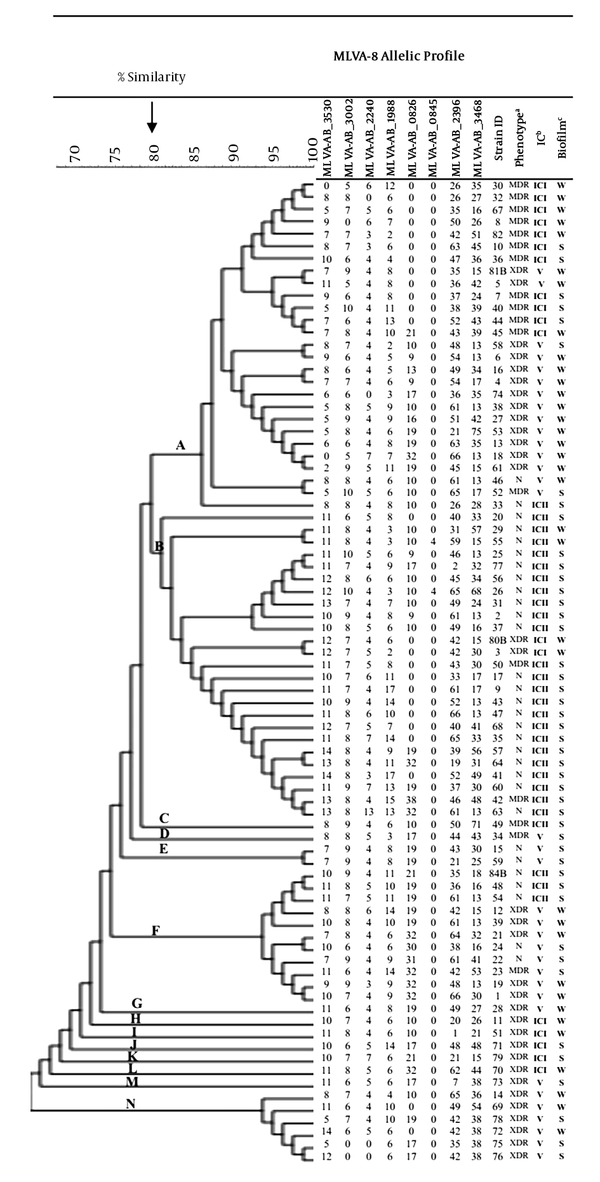 The OD550 mean (± SD) for the reference strain A. baumannii ATCC19606 (positive control) and LB medium (negative control) was 0.46 ± 0.04 and 0.060 ± 0.01, respectively. All clinical A. baumannii isolates were found to develop biofilm and 45 (56%) isolates were strong biofilm formers compared to the reference strain. There were no significant differences in bacterial growth between the weak and strong biofilm producers of A. baumannii (Figure 3), indicating that the difference in biofilm development was not related to the bacterial growth rate.

Growth rate analysis of strong and weak biofilm former A. baumannii against ATCC 19606.

As shown in Figure 4A, 76% of the isolates belonging to IC variants exhibited the XDR phenotype while 39% of the ICI and none of ICII isolates showed this phenotype. Indeed, our analysis revealed that IC-variants (76%) were found to be more frequent among XDR isolates compared to ICI and ICII types (P < 0.0001). The prevalence of non-MDR phenotype was significantly higher among ICII isolates (approximately 90%) compared to IC variants (15%) (P < 0.01). This phenotype was not found among ICI isolates. As shown in Figure 4B, 27 (90%) non-MDR isolates were strong biofilm producers whereas only 35% and 21% of MDR and XDR isolates were able to form strong biofilms, respectively. Indeed, the prevalence of non-MDR phenotype was significantly higher among strong biofilm formers than among weak ones (P = 0.001). 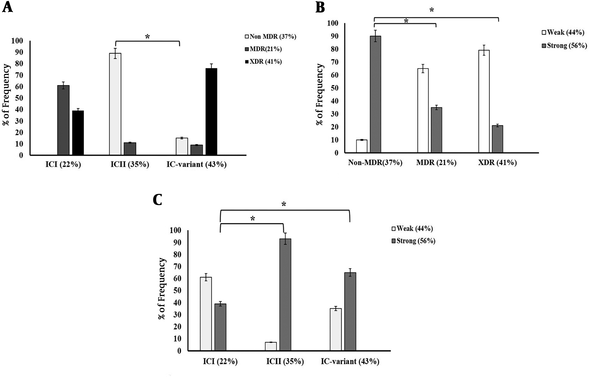 Figure 4C shows that the majority of the isolates in the ICI clone were able to form weak biofilms (61%). The frequency of strong biofilm formers was significantly higher in ICII and IC variant isolates (93% and 65%, respectively) compared to ICI isolates (P < 0.01).

Table 1. The Ability of A. baumannii Isolates to form Biofilm in Relation to Antibiotic Resistance Phenotypes

Table 2. The Ability of A. baumannii Major IC Types (ICI and ICII) to form Biofilm in Relation to Antibiotic Resistance Phenotypes

aValues is presented as mean ± SD.

Table 3. The Ability of A. baumannii IC Variants to form Biofilm in Relation to Antibiotic Resistance Phenotypes

aValues is presented as mean ± SD.

In recent years, there has been an increasing number of reports on infections by broad-spectrum resistant-A. baumannii worldwide, especially those involving burn wounds (14-16). Similarly, a high prevalence of such isolates was reported from Iran by our two previous studies (17, 18). Previous studies have demonstrated an increasing trend in the emergence of XDR strains over the last decade in Iran, raising a cause for concern (17-19). Our findings revealed that the majority of the isolates belonging to ICII type showed a non-MDR profile and had a significantly higher capacity to form biofilms compared to IC variants and ICI type. Accordingly, higher biofilm-forming ability appears to be a possible reason for the higher prevalence of ICII compared to IC variants, despite the higher rate of XDR phenotype in the IC variants.

Conflicting results have been reported by several previous studies on the relationship between biofilm-forming ability and antibiotic resistance phenotypes (MDR/XDR and Non-MDR) of A. baumannii (5-7). Accordingly, there appears to exist not enough studies for the precise assessment of the association between these phenotypes, necessitating further investigations. As mentioned above, the previous study revealed that biofilm formation capacity could be different among A. baumannii IC types (4); thus, investigation of the relationship between antibiotic resistance and biofilm phenotypes among IC clones can provide precise results. However, such comparison was not performed in previous studies. In this study, the association between these phenotypes was compared in major IC types and IC variants.

Together, in this study, the evaluation and comparison of biofilm-forming ability between non-MDR and MDR/XDR among all clinical A. baumannii strains revealed that most non-MDR isolates tended to develop stronger biofilms compared to MDR/XDR, suggesting an inverse relationship between multidrug resistance and biofilm formation capacity. Bacterial growth was not different between weak and strong biofilm producers, confirming that the difference in biofilm development was not related to the bacterial growth rate. It seems that susceptible isolates have an inherent tendency to develop stronger biofilms. In agreement with our findings, two previous studies reported a negative relationship between biofilm formation ability and antimicrobial resistance phenotype in A. baumannii (5, 6). Consistent with our findings, their results provided evidence that the ability to develop biofilm may be a crucial determinant in the survival of susceptible or non-MDR bacteria. However, another study indicated a significant association between high biofilm-forming ability and high level of antibiotic resistance (7). Investigation of the relationship between biofilm-forming ability and antibiotic resistance phenotypes among A. baumannii major IC types (ICI and ICII) also exhibited such a significant relationship. However, the assessment of this association among IC variants showed no significant relationship between these phenotypes. It seems that the relationship between antibiotic resistance phenotypes and biofilm formation capacity could be different among IC types.

In spite of individual differences among the isolates, investigation of all clinical A. baumannii isolates showed a negative association between the acquisition of MDR/XDR phenotypes and biofilm formation capacity in A. baumannii. These findings warrant a set of research to investigate the potential mechanisms to get an adjustment between biofilm formation capacity and antimicrobial resistance acquisition. Given that such a significant relationship was found among A. baumannii major international clonal types (ICI and ICII) but not among IC variants, the relationship between biofilm and antibiotic resistance phenotypes may be affected by IC types (major IC types or IC variants).

This is a report of the database from an M.Sc. thesis. We would like to thank the Tehran University of Medical Sciences, Tehran, Iran, for funding this study.

Copyright © 2018, Author(s). This is an open-access article distributed under the terms of the Creative Commons Attribution-NonCommercial 4.0 International License (http://creativecommons.org/licenses/by-nc/4.0/) which permits copy and redistribute the material just in noncommercial usages, provided the original work is properly cited
download pdf 720.90 KB Get Permission (article level) Import into EndNote Import into BibTex
Number of Comments: 0