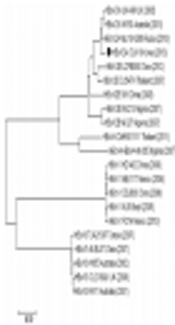 Human bocavirus (HBoV) is found worldwide and can infect the respiratory and gastrointestinal tracts of infants and children.

The aim of the present study was to characterize the complete genome of a new HBoV2A strain isolated from a patient in Korea with gastroenteritis.

Viral genomic DNA was extracted from an HBoV-positive stool specimen isolated from 3-year-old female with gastroenteritis. Entire coding sequences were analyzed using a newly designed set of primers in the conserved regions in 2017.

The full-length genome was 5,107 bp long. Phylogenetic analysis based on the complete genome sequence, including the three open reading frames (ORFs), indicated that CUK18 belonged to the HBoV2A genotype. The CUK18 strain showed the highest similarity with strain Nsc10-N386 isolated in Russia. Analysis of the ORF3, which encodes the viral capsid proteins VP1 and VP2, found that amino acid sequences corresponding to the three-fold-symmetry-related monomer were frequently substituted, a distinguishing feature of this specific genotype.

Results of this study may provide valuable information for HBoV epidemiology studies and vaccine development.

Human bocavirus (HBoV) is a recently identified virus of the family Parvoviridae, subfamily Parvovirinae, genus Bocavirus (1, 2). Human bocavirus is a small, non-enveloped virus (3), and the genome is composed of a linear, single-stranded DNA molecule of approximately 5,300 bp (4). Three open-reading frames (ORFs) have been identified in the HBoV genomes. Open reading frame 1 encodes the non-structural (NS) 1 protein, a multifunctional protein that participates in DNA replication, apoptosis, and gene transactivation. Open reading frame 2 encodes an additional NS protein, nuclear phosphoprotein (NP) 1, which plays a role in the expression of viral capsid proteins (5) and is involved in viral DNA replication at the replication origin (6). Open reading frame 3 encodes the two structural viral-capsid proteins (VP) 1 and 2, which are generated through alternative splicing events.

Human bocavirus are classified into four main genotypes: HBoV1 (7), HBoV2 (8), HBoV3 (2), and HBoV4 (9). HBoV2 can be further subdivided into two variants, HBoV2A and HBoV2B (10). Human bocavirus 1 is commonly detected in pediatric patients with respiratory tract infections, as well as in those with gastrointestinal symptoms. In contrast, the other three genotypes (HBoV2-4) have been isolated from fecal specimens (11, 12). Human bocavirus is difficult to culture in vitro, and animal models for HBoV infection have not been developed (13). In addition, HBoV infection frequently coexists with other viral or bacterial infections. Thus, sequence information from the HBoV genome may be useful for designing efficient diagnostic markers for HBoV infection.

Human bocavirus are known to be distributed globally, with reports from Africa (14), America (15), Australia (10), Asia (16-20), and Europe (9, 17). In Korea, approximately 8% of acute lower respiratory tract infections are associated with HBoV1 (21), while HBoV2 has been reported to be detected in approximately 4% of gastroenteritis patients (21, 22). However, HBoV studies in Korea were limited to partial ORF sequences, except for one study (21-24).

The aim of this study was to characterize a new HBoV strain isolated from a child with acute gastroenteritis using whole-genome sequencing.

An HBoV-positive stool specimen from a 3-year-old female with acute gastroenteritis in Gyeonggido, South Korea was collected in July 2013. The specimen was obtained through the Waterborne Virus Bank (Seoul, Korea). The use of this sample for the purpose of this study was reviewed and approved by the Songeui Campus Institutional Review Board of the Catholic University of Korea, Catholic Medical Center. The stool specimen was stored at -20°C until analysis. Viral genomic DNA was extracted from 140 µL of 10% fecal suspension using the QIAamp DNA Mini kit (Qiagen, Hilden, Germany) according to the manufacturer’s instructions.

To analyze the complete HBoV genome, PCR was performed with 2 × Emerald Amp PCR Master Mix (TaKaRa, Shiga, Japan). Nine primer sets were newly designed for the amplification of HBoV (Table 1). Among these, four were for the amplification of ORF1, one for ORF2, and four for ORF3. Thermal cycles were as follows: denaturation at 94°C for 5 minutes; amplification for 25 cycles at 94°C for 30 seconds, 54 - 60°C for 30 seconds, and 72°C for 1 minute; and extension at 72°C for 7 minutes.

The 5’ and 3’ terminal sequences were determined by rapid amplification of complementary DNA ends (RACE) using the RACE version 2.0 kit (Invitrogen, Carlsbad, CA, USA). Three gene-specific primers (GSP1, GSP2, and nested GSP) for 5’ RACE PCR amplification were designed based on ORF1 (Table 1). The 3’ end of HBoV genomic DNA was determined with 3’ RACE, with a reverse transcription reaction performed using the 3’-oligo (dT)-anchor-R primer. The second PCR amplification was performed with the VP1/VP2-F and 3’-anchor-R primers.

3.4. Cloning and Sequencing of the Complete Genome

The full-length genome of CUK18 was 5,107 bp long. Phylogenetic analysis was performed to evaluate the genetic relationships between the HBoV CUK18 strain and 20 reference strains. Following the analysis of the full-length sequences, CUK18 was found to cluster with three HBoV2A strains: Nsc10-N386, UK-648, and W153 (Figure 1). CUK18 exhibited the highest similarity to the HBoV2A strain Nsc10-N386 from Russia (Table 2). The nucleotide similarity between the two strains was 99.2%. The CUK18 strain was therefore classified into the HBoV2A genotype. The nucleotide sequences of the three large ORFs (NS1, NP1, and VP1/VP2) of the HBoV strains were compared (Figure 2A). In the analysis of the NS1 sequence, CUK18 again clustered with the three HBoV2A reference strains, with similarities ranging from 98.7% to 99.0% (Table 2). In contrast, similarities between CUK18 and the other 17 reference strains ranged from 74.2% to 98.1%. In the analysis of the NP1 gene, several nucleotide substitutions were found between the HBoV2A and HBoV2B strains. The NP1 nucleotide sequences of the four HBoV2A strains and two HBoV2B strains (CU54TH and LZFB080) were clustered together. When comparing CUK18 with the 20 reference strains, the nucleotide similarity of the NP1 gene ranged from 75.8% to 99.7% (Table 2). With respect to the ORF3 sequence, which encodes for the VP1 and VP2 genes, CUK18 and the three HBoV2A reference strains (Nsc10-N386, UK-648, and W153) clustered together, with similarities ranging from 99% to 99.5% (Figure 2A). In contrast, the CUK18 strain exhibited low sequence similarity with the five HBoV1 strains (CBJ030, HZ1402, KU3, Mty1117, and P214) with values ranging from 78.5% to 79.0% (Table 2). The nucleotide sequence similarities of CUK18 with the other 12 reference strains ranged from 87.1% to 96.2% for ORF3. Figure 2. Phylogenetic analysis of the nucleotide (A) and amino acid (B) sequences of NS1, NP1, and VP1 of HBoV CUK18 and reference strains. Representative strains are referred to by “genotype strain”. Closed circles indicate the novel HBoV CUK18 strain analyzed in this study.

The deduced protein sequences of the three ORFs were compared for the HBoV strains (Figure 2B). In the analysis of the NS1 protein sequence, HBoV2A strains clustered together and some minor amino acid sequence differences were revealed. Two amino acid substitutions were found in CUK18 at amino acid positions 378 and 612 of NS1, resulting in changes from asparagine (N) to aspartate (D) and glycine (G) to arginine (R), respectively. Analysis of the NP1 peptide sequence showed that the four HBoV2A strains and two HBoV2B strains (CU54TH and LZFB080) clustered together and exhibited identical amino acid sequences.

A comparison of the amino acid sequences of ORF3, encoding VP1 and VP2, revealed that CUK18 had the highest sequence similarity to the HBoV2A reference strain, Nsc10-N386, with 99.9% deduced protein sequence similarity for VP1. Comparing the CUK18 and Nsc10-N386 strains, a leucine (L) was changed to an arginine (R) at amino acid position 243 of VP1, which corresponded to amino acid position 111 of VP2. Among the four HBoV2A strains, three additional substitutions were identified at amino acid positions 29, 68, and 489 of VP1, reflecting substitutions from lysine (K) to glutamate (E), from aspartate (D) to asparagine (N), and from glutamate (E) to alanine (A), respectively. Gastroenteritis in infants and children can be caused by various bacteria and viruses, such as Salmonella, Shigella, rotavirus, norovirus, and astrovirus (13, 21, 22, 27-29). Human bocavirus gastrointestinal infections account for approximately 6% of gastroenteritis cases (13). Human bocavirus frequently exist in co-infection with other microorganisms. The average co-infection rate is 46% in patients with gastrointestinal infections (13). Complicating the study of HBoV, there are no in vitro cell culture systems or in vivo animal models for HBoV (13). In addition, new variants and uncommon HBoV types have the potential to become dominant. Thus, a molecular diagnostic method is needed for the detection of HBoV infection. Although HBoV is not a dominant cause of gastroenteritis in Korea (21, 22), the accurate diagnosis for HBoV infection is important for reducing the burden of HBoV-related disease and corresponding hospital costs.

New HBoV strains are emerging rapidly due to a high mutation rate (19). Single-stranded DNA viruses like parvoviruses have mutation rates approaching those of RNA viruses (30). Human bocavirus 1 was initially isolated from respiratory specimens in 2005 (2). Human bocavirus 2, HBoV3, and HBoV4 were subsequently detected in stool specimens (2, 8-10, 13). In addition, recombination is frequently observed between HBoV strains. Previous studies have reported that recombination break points are located at the beginning of ORF1, encoding NP1, and ORF3, encoding VP1 and VP2 (10, 17). In this study, analysis of the full-length sequence of an HBoV isolate led to the identification of a new HBoV2A strain (CUK18). The ORF1 and ORF3 nucleotide sequences of CUK18 exhibited the highest similarities with those of strain Nsc10-N386, but the nucleotide sequences of ORF2, encoding NP1, exhibited the highest similarity with those of both HBoV2A and HBoV2B strains. Previous studies on the molecular epidemiology of HBoVs have used partial ORF sequences from one of the three ORFs (21-23). Our results indicated that at least two ORFs should be used to discriminate among HBoV strains. Full-length sequences are thus helpful for defining newly emerging HBoV strains.

To our knowledge, this is the second report of the full-length sequence of an HBoV2A variant isolated from a stool specimen in South Korea. CUK18 is very similar to the Korean HBoV isolate CUK-BC20 (MF680549) in reported recently. However, there is a relatively low similarity compared to Russian HBoV isolate Rus-Nsc10-N386, which were isolated in 2010 - 2011. Analysis of the NP1 amino acid sequence showed a high similarity (100%) with the Rus-Nsc10-N386 strain, while relatively low similarity with CUK-BC20 strain (99.5%). Similarly, more amino acid substitutions were seen when compared to CUK-BC20 strain than when compared to Rus-Nsc10-N386 strain. The result may have had a time impact rather than a regional one. However, this study was not able to be used for analysis due to the lack of full-length sequenced Korean strains.

We suggest that the full-length sequence of the CUK18 strain can be used as a standard for comparison with other HBoV strains. The complete genome sequence determined in this study provides valuable information for improving the diagnosis of HBoVs, which can cause gastroenteritis in infants and children. In addition, it may be helpful for predicting the emergence of HBoV variants in neighboring countries and developing an effective HBoV vaccine.

The full-length sequence of an HBoV variant isolated from a clinical sample in South Korea was determined. Phylogenetic analysis suggested that the newly isolated HBoV belonged to the HBoV2A genotype. Five hyper-variable regions distinguishing this HBoV genotype were found in the viral capsid protein.