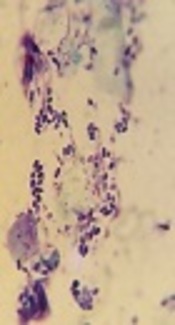 Otitis externa is an inflammatory in external auditory canal, with the presentation of otalgia, otorrhea, and pruritus. Bacteria and fungi are the most causative agents of the disease. Although several antifungal and antibacterial agents are usually used to treat it, combination therapy plays an important role in good treatment efficacy.

Seventy-two patients with mixed otitis externa were divided into two groups; the case group was treated with ceftazidime powder and topical miconazole, and the control group was treated only with topical miconazole. Both groups were evaluated after two weeks. The diagnosis of mixed otitis externa was based on signs, symptoms, and the presence of bacterial and fungal elements in direct examination and culture.

A study in the UK on the application of two regimens (neomycin, gramicidin and nystatin versus glycerine-ichthammol) to treat 64 patients with otitis externa found no statistically significant difference among these regimens in this regard (18). Another study in Spain found no differences in the effectiveness of cycloprox olamine or boric acid to treat otitis externa (19). In a study that compared three different regimens (acetic acid, acetic acid plus steroid therapy, and antibiotics plus steroid therapy), combination therapy with steroids was superior to acetic acid treatment only (20). Despite the high prevalence of otitis externa in Iran, there is no specific treatment protocol for the patients with mixed bacterial-fungal infections.

Thus combination therapy in mixed infective otitis externa may be better than only antimicrobial or antifungal treatment. Ceftazidime, a third generation cephalosporin, has more affinity for receptors and makes them as a poor substrate for some β-lactamases. Its modified structure significantly enhanced its potency against Pseudomonas species (21). It was thought that local application of ceftazidime in combination with miconazole may have better clinical efficacy in mixed infective otitis externa.

The current study aimed at comparing the efficacy of ceftazidime and miconazole versus miconazole alone to treat mixed otitis externa in an Iranian population.

The current clinical trial was registered in the Iranian Registry of Clinical Trials (Reg. No. IRCT2013102713136N2) (www.irct.ir). Furthermore, the Ethics Committee of Babol University of Medical Sciences, Babol, Iran, approved the design and protocol of the study (code No. 3810). Patients’ names and personal information, illnesses and medical information were kept confidential.

The current randomized controlled clinical trial was conducted to compare the efficacy of ceftazidime and miconazole versus miconazole alone to treat mixed otitis externa. Patients attending Ayatollah Rouhani teaching Hospital in Babol from 2015 to 2016 were recruited. The inclusion criteria were clinical manifestations such as discharges, itching, pain, and swelling compatible with mixed otitis externa. The exclusion criteria were chronic otitis media and also isolation of bacteria or fungi from culture. Patients who were immunocompromised were also excluded. The predisposing factors were ear manipulation, poor hygiene, long-term application of broad-spectrum antibiotics, and steroids therapy. The patients’ demographic features, clinical manifestations, type of therapeutic regimen, and outcomes were recorded. Informed consent was obtained from all the participants. All data in the questionnaires were stored in a safe place and used only for the current study.

The diagnosis of mixed otitis externa was based on the presence of pain, swelling, itching, and otorrhea. The diagnosis of mixed ear infection was based on clinical findings, physician observation, and microbiological tests including direct examinations and culture. Therefore, it is recommended that both organisms should be considered in the treatment protocol of otitis externa.

The ear canal was cleaned with 2% hydrogen peroxide and dried using a swab. It was then flushed with 2% boric alcohol (98% ethanol and 2% boric acid). The patients were randomly divided into two groups. The patients in group one (n = 34) received 100 mg of topical miconazole (intervention/case group) administered using a sterile catheter, and 100 mg ceftazidime powder via insufflation. The patients in group two (control, n = 38) received 100 mg of topical miconazole (control group). Both groups received a single dose of these drugs (22). All the patients were re-assessed on the 14th post-treatment day to evaluate clinical signs and symptoms of mixed otitis externa.

All data were analyzed with SPSS version 18.0. The categorical variables were compared using a t-test, and the qualitative variables were compared via a Chi-squared test. The selected α and β errors were 0.05 and 0.20, respectively. To compare the efficacy of both regimens, an analysis of variance test was conducted. A value of P < 0.05 was considered statistically significant.

Table 1. The Demographic and Clinical Characteristics of the Study Groupsa

Table 2. Outcome of Treatments in the Study Groupsa

Direct examination showed that Gram-positive cocci were the most common bacterial agents in both groups, followed by Gram-positive and Gram-negative bacilli in the case group and diphtheroids and Gram-positive bacilli in the control group. True mycelium (55.88%) and pseudomycelium, with or without yeast cells (44.12%), were observed in the case group. In the control group, true mycelium and pseudomycelium were detected in 63.16% and 36.84% of patients, respectively. Staphylococcus epidermidis, Pseudomonas spp., and diphtheroids were the most common bacterial causative agents in both groups, according to microbiological analyses (Table 3). Aspergillus spp., particularly A. niger, and Candida spp. were the commonest fungi isolated from cultures in both groups (Table 4).

At present, due to the absence of a specific protocol for mixed otitis externa, the treatment depends on the experience of each clinician and medical resources (23). Previous studies revealed that post-treatment recurrences may be related to the antibiotics used to treat otitis externa (24, 25). The current study results showed that a regimen containing both an antimicrobial and antifungal agent was preferable to a fungal agent alone. The results of the current study were consistent with those of other studies (26, 27). A previous study reported that Triadcortyl® (TAC) combination with three antibiotic agents (neomycin, gramicidin, and nystatin) was more effective than glycerine-ichthammol (GI) solution alone to relief pain in patients with severe acute otitis externa (i e, cases with approximately six months of otitis externa symptoms manifestation) (18).

However in the current study, the average duration of otitis externa was seven months. Previous studies reported that patients with long-term antibacterial therapy are predisposed to the fungal colonization of external ear and concluded that the initial regimen should consist of antifungal therapy (11, 26). The current study employed a combination of antibacterial and antifungal agents concurrently and found a high curative rate. Specifically, symptoms of mixed otitis externa were resolved in 67% of patients treated with combination therapy versus 29% of patients receiving the single therapy. The curative rate was better than that of reported by Abelardo et al., following the administration of antibiotics and steroids for two weeks (2).

Balen et al., administered single and combination regimens (steroid therapy alone, steroid plus acetic acid, and steroid plus antibiotic) in cases with otitis externa and reported a 40% cure rate seven days post-treatment with the combination regimens (20). The superior outcomes obtained in the current study may be due to the presence of S. epidermidis and P. aeruginosa as the causative agents in most cases, both of which are commensal bacteria. The causative agents isolated in the current study were consistent with those of the earlier works (24, 28, 29). In the current study, itching and hearing loss in the external ear canal revolved following combination therapy.

In contrast, in a study conducted in the US, Rosenfeld et al., reported that these symptoms had the same pain improvement following single therapy with a steroid and antimicrobial/steroid combinations (17). The difference may be due to the milder form of otitis externa in the patients in the US study. Mosges et al., reported the resolution of ear canal swelling in 61% of cases of otitis externa following antibiotic and steroid therapy for 10 days (30). The current study achieved a higher response rate using a single dose of ceftazidime powder and topical miconazole in comparison with the control group. However, Mosges et al., reported a higher rate of pain relief (90%) (30), as compared with (61.76%) the current study. It is thought this finding is related to antimicrobial activity of ceftazidime and also the physical effect of its powder; thus, it is proposed that this effect be evaluated with inert powder and the results be compared with non-powder form of the antibiotic. Also, the penetration of antibiotics such as ceftazidime should be measured.

Authors wish to thank the Vice-Chancellery for Research at Babol University of Medical Sciences for the approval of the study and also for the financial and official support. The authors also thank all the study participants, Dr. Mahmood Hajiahmadi for the statistical analysis, Mrs. Zahra Naderian and Maryam Sadat Shafii for providing laboratory facilities.