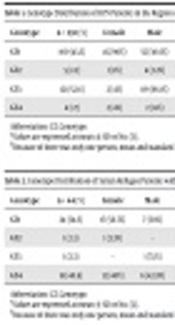 how to cite: Kirişci Ö, Çalışkan A. The Predominance of Genotype 3 in Hepatitis C Virus in the Province of Kahramanmaras, Turkey/Genotype Distribution of Syrian Refugee Patients with Hepatitis C in Kahramanmaras Province. Jundishapur J Microbiol. 2019;12(4):e80872. doi: 10.5812/jjm.80872.

The genotype determination is of importance in the clinical management of hepatitis C virus (HCV) infection.

The aim of this study was to evaluate the distribution of genotypes in HCV patients in the Kahramanmaras region, Turkey, and determine if the genotype rates of Syrian refugee patients with hepatitis C are different from the population they migrated to.

Blood samples sent to the microbiology laboratory between September 2014 and February 2018 were examined with genotyping using a real-time PCR reagent kit.

Predominant genotype 3 with the prevalence of 52.8% was seen to be more frequent in the current study region than in other regions of Turkey, demonstrating the highest rate of genotype 3 infection in Turkey to date. In Syria, the predominant HCV genotype is genotype 4 with a 57% prevalence, followed by genotype 1 with 29%. In the Syrian refugees, however, the current study showed genotype 1 was more frequent than genotype 4 (54.5 % vs. 40.9%). This suggests that HCV genotypes may be affected by situations such as war and migration.

Following developments in molecular diagnosis methods, hepatitis C virus (HCV) has been determined as the main source of hepatitis that is non A, non B, which occurs following blood transfusion (1). It is estimated that between 170 and 200 million people worldwide have contracted chronic HCV and approximately 3% of the global population is affected by the HCV infection (2). The prevalence in Turkey has been reported in the range of 0.3-1.8% (3). The HCV genotype prevalence in different regions shows differences according to the population tested, the infection route, and virus mutation. It has been reported that throughout the world, genotype 1 (G1) is most common, accounting for 46% of all adult anti-HCV infections, followed by G3 (22%), G2 (13%), G4 (13%), G6 (2%), and G5 (1%). Of the total HCV infections, 3% are associated with undefined or combination genotypes (4).

Genotype 1 is known to be predominant in Australia, China, Taiwan, Japan, Korea, Iran, and most countries in North Asia, Europe, Latin America, and North America (53-71% of all cases) while in Vietnam and other Southeast Asian countries, genotype 6 is more frequent. At lower rates than genotype 1, genotype 2 is seen at a considerable rate in Japan, Korea, and Taiwan. However, it is dominant in Mediterranean Countries and other areas of the Far East (4, 5).

In India, Pakistan, and Thailand predominates genotype 3. Middle Eastern countries such as Egypt, Saudi Arabia, Syria, Lebanon and North Africa report the genotype 4 infections to be predominant although genotype 3 is also seen in other Middle Eastern countries such as Iraq and Iran, which can be possibly attributed to the patterns of migration in these regions (4, 5). Genotype 5 has been seen in a relatively small number of Syrian patients, and there have been few reports from Asia. Genotype 6 is known to be predominant in Asia, with the highest numbers reported from Vietnam (4, 5). In Turkey, HCV genotype 1 is predominant, with the frequency of genotypes 2, 3, and 4 varying according to the region (6).

Genotype analysis was applied to the samples of 274 patients with determined HCV RNA positive plasma samples from among different patients, which had been sent to the microbiology laboratory between September 2014 and February 2018. Hepatitis C Virus RNA and HCV genotypes are regularly tested in the setting hospital in samples from HCV-positive patients from the general population and from legal cases both in the city center and in the surrounding provincial areas.

The HCV genotype was tested using the real-time PCR method as per the manufacturer’s instructions. Genotypes 1, 2, 3, and 4 were analyzed. Genotyping was performed in serum samples obtained from 274 patients that were found to be positive for HCV-RNA. The sera were stored at -80°C until the day of analysis when they were warmed to room temperature before assay. The HCV genotype analysis was applied using the GenoSen HCV Genotyping 1/2/3/4 RT-PCR Reagent Kits (Genome Diagnostics, New Delhi, India). For each reaction, 7.5 μL of HCV Genotyping Super Mix (R1) was mixed with 2.5 μL of HCV Genotyping Mg solution (R2) and 15 μL of patient’s serum. After 10 minutes of a single cycle at 95°C in the Rotor-RG-Q (QIAGEN, Hilden, Germany), 45 cycles were completed (15 seconds at 95°C, 20 seconds at 55°C, and 15 seconds at 72°C).

All statistical analyses were done using SPSS V. 24.0 software. Continuous variables were reported as means ± standard deviation (SD) and categorical data as numbers (n) and percentages (%). The conformity of the data was assessed using the Kolmogorov-Smirnov and Shapiro-Wilk tests. Kruskal-Wallis variance analysis and Mann-Whitney U test were applied in the comparisons of independent groups. For categorical variables, the chi-square test was used. A value of P < 0.05 was accepted as statistically significant.

In this study, the HCV genotypes were examined in a total of 274 patients living in the province of Kahramanmaras between September 2014 and February 2018. The total samples were obtained from 80 females (29%) and 194 males (70%) with a mean age of 42.8 ± 21.17 years. The age of patients showed a statistically significant difference between the four groups according to their genotype status (P = 0.0001). The age of patients with genotype 3 was found to be statistically significantly lower than that of individuals with genotype 1 and genotype 4 (P = 0.0001 and P = 0.02, respectively). A statistically significant difference was determined in terms of gender between the four genotype groups (P = 0.0001). The highest rate of GT1 was seen in women while and the rate of GT1 was 0.6 in men. GT3 was the most common genotype in men while it was only 4% in women.

The predominant genotype in hepatitis C patients living in Kahramanmaras province was GT3 (52.8%) while in the Syrian refugees, GT1 was predominant with 54.5%. The genotype distributions, mean age, and gender of the patients are summarized in Tables 1 and 2.

Table 1. Genotype Distribution of HCV Patients in the Region of Kahramanmaras, Turkey (n = 230)a

bBecause of there was only one person, mean and standard deviation could not be calculated.

In Syrian refugees, there was no statistically significant difference between gender groups in terms of age (P = 0.791).

Table 2. Genotype Distribution of Syrian Refugee Patients with HCV in the Region of Kahramanmaras, Turkey (n = 44)a

bBecause of there was only one person, mean and standard deviation could not be calculated.

It is essential for an appropriate treatment algorithm to determine the general genotype distribution of the country (7, 8). The HCV genotype distribution in a geographical area can be altered by increasing cultural diversity. War, migration, and tourism can affect the epidemiology of infections. In recent years, the change in HCV epidemiology has been noticeable in Turkey (9). Whether this change is regional or is reflected in the country, in general, could be revealed by studies conducted at specific intervals.

In the current study, we observed a different prevalence rate for genotype 3 in the province of Kahramanmaras so that it was highest, 52.8%, among the other rates reported to date in Turkey. In a 2013 study, Kirisci et al. reported a prevalence of 40% for genotype 3 (25). In a study conducted by Caliskan et al. in 2015 (26), genotype 3 was determined at a rate of 46%. Thus, an increase in the genotype 3 prevalence can be seen in the region during that period. The high prevalence rate in this study, which is different from other studies, indicates a difference, which could be explained by further analytical studies of the roots of population (refugees, prisoners, drug addicts, etc.) to determine whether this is a regional difference or a sign of a change in the genotype prevalence within the region as a result of the patients’ distribution in the study area because of war and migration.

Studies in Turkey have reported the rate of HCV genotype 4 in the range of 0.6 - 35.6%. Hepatitis C Virus genotype 4 has a high prevalence in the provinces of Kayseri and Afyon in Turkey. In a study in Kayseri by Gokahmetoglu et al. (21), genotype 4 was found at a rate of 35.6%. In another study in Kayseri by Kayman et al. (10), Hepatitis C Virus genotype 4 was found to be 32%. In the current study, genotype 4 was detected at a rate of 1.7 %, which was consistent with other studies in Turkey (9, 16). In Syria, the predominant genotype is genotype 4 (4c/4d) (59%), followed by genotype 1 (28.5%), genotype 5 (10.1%), genotype 3 (1.8%), and genotype 2 (0.8%) (4, 27). With the start of the Syrian civil war in 2011, a massive migration wave began from Syria to Turkey. The results of studies carried out after this date in the regions of Turkey neighboring Syria are striking and will emerge through epidemiological studies on genotypes that are changing over time. In the current study, genotype 1 was determined at a higher rate (54.5%) than genotype 4 (40.9%) in the Syrian refugee patients. Although genotype 4 is predominant in Syria, genotype 1 was determined to be more dominant in the refugees who had migrated to Turkey.

This study suggests that genotype rates could be affected by migration. Moreover, this genotype profile is not similar to a regional genotype distribution (genotype 1, 54.5%) of refugee patients, but is close to the genotype profile of Turkey. This could be further explained by future studies conducted on larger patient populations.

Copyright © 2019, Author(s). This is an open-access article distributed under the terms of the Creative Commons Attribution-NonCommercial 4.0 International License (http://creativecommons.org/licenses/by-nc/4.0/) which permits copy and redistribute the material just in noncommercial usages, provided the original work is properly cited.
download pdf 118.73 KB Get Permission (article level) Import into EndNote Import into BibTex
Number of Comments: 0