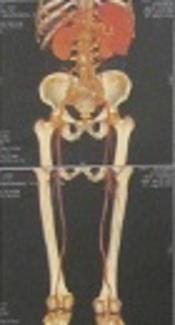 Bloodstream infection due to Acinetobacter baumannii is characterized as a nosocomial infection, particularly occurs in intensive care units (ICUs). It is an opportunistic bacterium and therefore, almost exclusively affects predisposed patients who have undergone invasive procedures.

We present a detailed clinical course of a persistent blood-stream infection due to A. baumannii.

In this case, clinical remission was achieved after several treatments with combinations of sulbactam, containing cefoperazone sodium/sulbactam, carbapenems, minocycline, and aminoglycosides. Despite not achieving bacterial clearance, the treatment presumably reduced the number of bacteria in the blood. Our findings shed light on the treatment of persistent bloodstream infection due to A. baumannii.

The patient was a 58-year-old male who complained of “recurrent fever of more than 18 months and persistent fever of more than 20 days after graft replacement for left common iliac artery aneurysm two years ago”. He was admitted to our hospital on November 23, 2010. In November 2008, he was found to have an intraabdominal mass in a medical examination. He was diagnosed with a “left common iliac artery aneurysm” after which he underwent graft replacement in November 2008. Six months after the surgery, he developed recurrent high fever and chills without an apparent source. All blood cultures revealed the growth of A. baumannii. He received several combinations of imipenem, cefoperazone sodium/sulbactam, minocycline, rifampicin, and other agents for 4 to 12 weeks. However, he still exhibited fever with an interval ranging from weeks to months. Blood cultures obtained during the symptom-free interval remained positive (for A. baumannii).

Twenty days before the admission, he again had a fever with body temperature as high as 42ºC and chills accompanied by shortness of breath. Loxoprofen was helpful to reduce his body temperature to normal, but minocycline had no effect on lowering his body temperature or alleviating chills. Since the onset of his condition, he had no cough or expectoration, no chest tightness or shortness of breath, no urinary frequency, urgency, or dysuria, no abdominal pain, and no diarrhea. He ate and slept normally and had normal urine and bowel movements. His body weight did not decline significantly. Physical examination on the admission was as follows: The patient’s general condition was fair. His temperature, pulse rate, respiratory rate, and blood pressure were 37ºC, 86 beats per min, 20 breaths per min, and 120/70 mmHg, respectively. He was conscious, breathing steadily, and had no cyanosis of the lips. No lymph nodes were palpable on the cervical area. His lungs were clear to auscultation bilaterally without rales or rhonchi. No cardiac murmur was heard. An abdominal surgery scar and abdominal mass were visible on the otherwise soft abdomen. The mass was approximately 5 cm × 5 cm and palpable under the xiphoid process, which was soft and slightly tender. The liver and spleen were not clinically palpable. Both lower limbs and feet were positive in terms of edema. Figure 2. The CTA (64-row) of the abdomen and the artery of the lower extremity

Treatment after admission: The patient had underlying diabetes and repeatedly contracted high fever and chills after graft replacement. He had been admitted to our hospital with a fever on three occasions, and all blood cultures were positive for A. baumannii (Figure 1). Therefore, the persistent bloodstream infection by A. baumannii was confirmed. He received comprehensive anti-infective therapy: intravenous cefoperazone sodium/sulbactam (1:1) 3.0g q6h, oral minocycline 50 mg twice a day (bid), and imipenem 0.5g every 8 hours (q8h) for 6 weeks. After the antibiotics were discontinued, the patient did not complain of discomfort. His medical indicators after antibiotic discontinuation were as follows: WBC: 5.31 × 109/L; RBC: 2.94 × 1012/L; HGB: 66 g/L; PLT: 169 × 109/L; ALT: 4 U/L; AST: 11 U/L; ALB: 31.2 g/L; CRP: 13.1 mg/L; ESR (1h): 15mmH2O; Cr: 50 μmol/L; and BUN: 4.5 mmol/L. The patient maintained a stable body temperature, permitting his discharge.

The history of diabetes and vascular graft implantation, long-term intermittent fever with chills, and positive blood cultures during three hospitalizations indicated infection with pan-resistant A. baumannii. Therefore, persistent bloodstream infection by A. baumannii is the likely culprit for this admission. Esophageal echocardiography was performed to eliminate the possibility of heart valve vegetations. The results suggest no suspicious echo in any of the valves or the left atrial appendage, thus excluding the possibility of infective endocarditis. Meanwhile, in light of the past graft implantation, imaging tests on the patient’s surgical site were performed several times to locate lesions that may require surgical intervention. The CTA (64-row) of the abdomen and the artery of lower extremity showed that the wall of the abdominal aorta was thickened and the formation of multiple calcified plaques could be seen. The inferior segment of the abdominal aorta and the near segment of both common iliac arteries, internal iliac arteries, and external iliac arteries were occlusive. The insertion of the blood vessel, which was from the inferior segment of the abdominal aorta to both external iliac arteries could also be seen. Based on the clinical manifestations and imaging results, the surgical consultation suggested that the postoperative changes of the lower abdominal aorta and bilateral iliac arteries did not suggest vascular graft infection, thus no surgical intervention was needed.

The blood culture results of the past three admissions are listed in Figure 1. The initial susceptibility result indicated that the A. baumannii strains were resistant or intermediately sensitive to most antimicrobial agents. However, after several hospitalizations and medications, the blood cultures and susceptibility tests suggested the presence of pan-resistant A. baumannii. The evolution of the resistance spectrum may be the result of drug selective pressure, which changes the mechanism of drug resistance (3). According to our previous study on multidrug-resistant A. baumannii (4), enzyme-producing and active efflux pump mechanisms may coexist. As drugs against pan-resistant A. baumannii are limited at present, it is important to use them in proper combinations to optimize drug synergy and prevent the emergence of resistance during the treatment (5). Typical pairs include the following: carbapenems + sulbactam; polymyxins + rifampicin; colistin + minocycline; colistin + doxycycline; and sulbactam + carbapenems or cefepime (6-8).

In this case, the patient received the comprehensive anti-infective therapy consisting of cefoperazone sodium/sulbactam + oral minocycline 50 mg bid + imipenem (Tienam). The treatment prolonged the symptom-free intervals decreased his body temperature to normal and improved his clinical symptoms. By the sixth week of medication, the intravenous antibiotics were discontinued. Blood culture was performed for bacteriological evaluation on the same day when the patient did not exhibit fever. To our disappointment, the blood culture of both upper extremities was still positive for A. baumannii. Although the course of the treatment and time of drug discontinuance are critical for complete remission, it is unclear whether treatment should be discontinued upon observing clinical improvement or waiting until bacteria elimination is confirmed. Considering the outcomes for this patient, we believe that clinical improvement is a more suitable indicator of the therapeutic effect. Furthermore, we stopped the use of antibiotics at the end of week 6 to prevent further drug resistance. In the viewpoint of the weak virulence of the strains, we provided adjuvant therapy to enhance the patient’s immunity. Fortunately, he did not experience fever, even after discharge.

Although polymyxin plus doxycycline can be used for the treatment of pan-resistant A. baumannii (9, 10), they are not clinically available. In this case, clinical remission was achieved after several treatments with combinations of sulbactam, containing cefoperazone sodium/sulbactam, carbapenems, minocycline, and aminoglycosides. Despite not achieving bacterial clearance, the treatment presumably reduced the number of bacteria in the blood. Our findings shed light on the management of persistent bloodstream infection due to A. baumannii.

In this case, clinical remission was achieved after several treatments with combinations of sulbactam, containing cefoperazone sodium/sulbactam, carbapenems, minocycline, and aminoglycosides. Despite not achieving bacterial clearance, the treatment presumably reduced the number of bacteria in the blood. Our findings shed light on the treatment of persistent bloodstream infection due to A. baumannii.