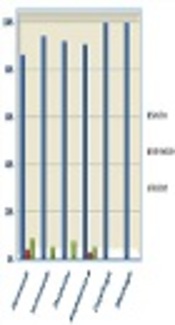 The frequency of nosocomial yeast infections has increased dramatically in the recent years. They are considered an important cause of morbidity and mortality in immunocompromised cancer patients. The majority of yeast infections are caused by Candida species. However, species like Trichosporon and Rhodotorula should be considered as possible infectious agents as well.

This study aimed at determining the prevalence of yeast species, their distribution among patients and the antifungal susceptibility profile at Oncology Center, Mansoura, Egypt.

From December 2016 till November 2017, cancer patients who developed infective episodes two days or more following hospital admission were included in the study. Clinical samples were collected according to the site of infection using standard sterile procedures. Blood samples were cultured using the BACT-ALERT system. Fungal identification and susceptibility testing were performed by Vitek 2 system.

Vitek 2 system offers a novel method for the early identification and susceptibility testing of different yeast species. It helps to minimize the risk for emergence of resistant species and reduce mortality rates, particularly in cancer patients.

Nosocomial fungal infections are increasingly isolated from immunocompromised patients. Predisposing risk factors include hematological malignancy or solid organ tumors, immunosuppressive drugs and different invasive medical procedures (1). Full identification of fungi down to the species level can help to predict antifungal susceptibility profile; however, in certain cases susceptibility pattern cannot be determined by only species identification. Antifungal susceptibility is also considered as an epidemiological tool to detect the early emergence of resistance (2).

The majority of yeast infections are caused by Candida species. However, there may be variations in their clinical severities and outcomes. At least 15 species including Candida can infect humans, and Candida albicans is known to be the most widely reported cause of nosocomial fungal infections (3). In particular, cases of candidemia caused by non-albicans Candida species such as C. parapsilosis, C. krusei, C. tropicalis, C. guilliermondii and C. glabrata have been reported in cancer patients at an increasing rate over the recent years (4).

Trichosporon is an infrequent yet important yeast pathogen in patients with poor immunity. There are many Trichosporon species with variable antifungal susceptibilities. Trichosporon asahii and T. mucoides are among the most common species and have been linked with fungal blood stream infections and skin sores (5). Another type of yeast infection caused by Rhodotorula species has emerged among cancer patients. Members of Rhodotorula species were considered to be non-pathogenic. However, Rhodotorula species such as Rhodotorula mucilaginosa, R. glutinis and R. minuta have been reported as infectious agents in humans. Most cases of infection were fungemia associated with central venous catheter (6).

The aim of our study was to evaluate the prevalence of yeast species, their distribution among patients and the antifungal susceptibility profile at the Oncology Center, Mansoura, Egypt.

A cross-sectional observational study was carried out over a one-year period from December 2016 to November 2017.

The exclusion criteria included systemic antifungal treatment, incomplete medical records, discharge before sampling and lack of consent to participate in the study.

All the isolates were identified using the commercial Vitek 2 system (bioMérieux, France). Then, 3 ml of sterile saline was added in Vitek 2 polystyrene tubes. Fungal colonies were suspended in saline with the help of sterile loop. The desired turbidity of suspension should be kept between 1.8 and 2.2 McFarland Standard using DensiChek plus (biomérieux, France).

A single yeast colony was directly applied to a disposable polypropylene slide using a 1-μL loop and was lysed by direct 0.5 μL formic acid (25%) immediately after application on the target plate. Afterwards, 1 μL of the matrix solution was applied and allowed to dry at room temperature. The approximate sample preparation time was 1 min per isolate. Vitek MS identification system is based on the comparison of the characteristics of the spectra obtained with the stored database. This database was built using spectra for the known strains of each claimed species. Identification results for yeast isolates were consistent with the those obtained by Vitek 2 system (bioMérieux, France).

Antifungal susceptibility testing was performed by AST-YS07 cards against fluconazole, voriconazole, amphotericin B, flucytosine, caspofungin and micafungin. The cards containing serial dilutions of each antifungal agent were tested. Following loading of the cassette, dilution of the fungal suspensions and card filling were performed automatically by the Vitek 2 system. The cards were incubated at 35°C for 18 hrs. Median values for the minimum inhibitory concentration (MIC) were calculated and used to assign isolates into susceptible, intermediate or resistant categories.

All the collected data were statistically analyzed using SPSS version 21.0.

Over a period of one year, 87 yeast species were isolated from 1,388 admitted patients with a prevalence rate of 6.3%. The majority of the species in our study were obtained from female patients (51.7%; 48.3% from males). The mean age of male and female patients was 34.93 ± 20.17 y and 43.36 ± 21.64 y, respectively. Several risk factors were observed in our patients including chemotherapy/steroid or empirical antibiotics intake (96.6% for each) followed by oral mucositis (92%) and neutropenia (88.5%). Yeast infection was more common in patients with hematological malignancies (56.4%) than those with solid tumors (43.3%; Table 1).

Fungal isolates with significant growth were obtained from the collected samples using standard sterile procedures. Table 2 presents the species distribution in different clinical samples. Overall, 95.3% of the samples were Candida species, while Rhodotorula and Trichosporon species were identified in 4.7% of the samples. Candida albicans was the most frequently isolated yeast in 35 (40.2%) patients. Major non-albicans Candida species were C. tropicalis (14.9%), C. parapsilosis (9.2%), C. guilliermondii (6.9%) and C. famata (6.9%). Most of the species were isolated from urine (47.1%), oropharynx (24.1%) and blood (21.8%). Few isolates were obtained from surgical drains (5.8%) and CSF (1.2%). Candida albicans accounted for the majority of fungal bloodstream infections. However, the overall number of patients presented with candidemia caused by non-albicans species was higher (12 out of 19 patients). The most common species were C. krusei followed by C. tropicalis, C. parapsilosis and C. guilliermondii.

Breakpoints were developed for different fungal species and antifungal agents as: (I) Susceptible (this is the drug of choice), (II) intermediate (means that higher dosing regimens have better treatment outcomes) and (III) resistant (drug has no role in treatment) (Table 3).

aNumerical values are expressed in µg/mL.

As regard the antifungal susceptibility of the obtained fungal isolates, 82 (94.3%) were susceptible to voriconazole, 80 (92%) to flucytosine, 79 (90.8%) to amphotericin B and 75 (86.2%) were susceptible to the fluconazole. All of these isolates were susceptible to caspofungin and micafungin (Figure 1). Candida albicans was the most sensitive species to all antifungal agents, whereas C. parapsilosis and C. tropicalis had the highest sensitivity among non-albicans Candida species. Trichosporon and Rhodotorula species were equally sensitive to all antifungal agents. Resistance to fluconazole, flucytosine, amphotericin B and voriconazole was observed in 8 (9.2%), 7 (8%), 5 (5.7%) and 5 (5.7%) samples, respectively. Four (4.6%) samples had an intermediate sensitivity to the fluconazole, three (3.4%) to the amphotericin B and no sample had intermediate sensitivity to voriconazole or flucytosine. Among all the fungal isolates, C. krusei, C. guilliermondii and C. ciferri demonstrated high antifungal resistance (Table 4). aValues are expressed as No. (%)

Fungal infections are an increasing cause of morbidity and mortality among hospitalized patients. There has been an overall increase in fungal healthcare-associated infections in the last few decades, which is likely a consequence of advances in medical and surgical therapies (7). In our study, several factors were associated with fungal infection such as chemotherapy/steroid intake, use of empirical antibiotics, oral mucositis, neutropenia, prolonged hospital stay and ICU admission. A higher percentage of fungal infections was observed in patients with hematological malignancies than those with solid tumors.

Several studies (8-10) have confirmed the importance of these risk factors. Higher incidence of yeast infections in patients receiving chemotherapy, corticosteroids or empirical antibiotics can be explained by markedly suppressed immune system, particularly in cancer patients. Yeast infection was also observed in patients with oral mucositis following cancer therapy. This can be explained by mucosal barrier injury that facilitates fungal colonization and infection. Reduced ability to maintain oral hygiene may also increase the risk for oral candidiasis (11). Distribution of yeast species is different in various regions and studies. Candida species are the most common yeast species causing nosocomial fungal infections, especially in critically-ill and immunocompromised patients (12). Our study results are in agreement with the previously published studies where the most common yeast species were C. albicans, C. tropicalis, C. krusei and C. parapsilosis (13-15).

On the contrary, another study found that the majority of Candida infections (59.8%) were caused by non-albicans Candida species, whereas C. albicans accounted for 40.2% of yeast infections, and attributed the cause to some predisposing factors (16). Candidemia is a rare finding in healthy individuals. However, it is commonly found in immunocompromised patients, particularly those with several risk factors such as cancer patients. Candida albicans was the most common causative agent (36.8% of all cases). Non-albicans Candida species including C. krusei, C. tropicalis, C. parapsilosis and C. guilliermondii were involved in 63.2% of the cases. This is considered a serious health problem since some of these species are known to be intrinsically resistant to azoles. These results are consistent with those of previous studies, where non-albicans Candida species were recovered from blood cultures with increased frequency (17, 18).

Infrequent yeast species including R. glutinis and Trichosporon species were isolated in our study. They are emergent yeast pathogens capable of causing invasive infections increasingly isolated from immunocompromised patients (19). Although R. glutinis and T. asahii are infrequent causes of yeast infection, they should be put into consideration in respiratory tract infections among cancer patients. Antifungal susceptibility testing by broth microdilution is very tedious and time consuming, and it is affected by several factors that may cause widely discrepant results such as pH, inoculum preparation, medium formulation, time of incubation, temperature of incubation and subjective interpretation of results (2).

In our study, we used Vitek 2 system for antifungal susceptibility testing. Despite being expensive, this method is easy to perform and requires minimal handling. The reading is automatically determined and interpreted by the system software (20). Candida species differ in their susceptibility to antifungal agents. Continuous exposure to azoles, along with infection with Candida strains with intrinsic resistance to azole drugs such as C. krusei, has an important role in the acquisition of antifungal resistance. Resistance rate seen in our study was quite consistent with the findings of a previous study in which C. krusei was the most resistant species to many antifungal drugs with the highest overall mortality (14).

Furthermore, the decreased in vitro susceptibility of C. guilliermondii and C. krusei to azoles was noted in several previous studies (21, 22). Resistance to azoles was reported by Pfaller et al. (2010) in C. krusei and C. guilliermondii infection in agreement with this study. Candida ciferri is another infrequent non-albicans Candida species that exhibits resistance in vitro to all azole compounds tested (23). Resistance to amphotericin B is a rare finding. Five (5.7%) Candida isolates were resistant to amphotericin B. These data are consistent with the findings of a previously published study showing that 4.1% of all Candida strains were resistant to amphotericin B (4). Caspofungin and other echinocandins are the most preferred drugs when patients fail to respond to other antifungals (24). In our study, all the yeast isolates were susceptible to caspofungin and micafungin.

Vitek 2 automated system offers a novel method for the early identification and susceptibility testing of different yeast species. It helps to minimize the risk for emergence of resistant species, shorten the duration of hospital stay and reduce mortality rates, particularly in cancer patients.

The authors would like to thank the clinical microbiology staff of Mansoura Oncology Center for providing the facilities needed for this work.