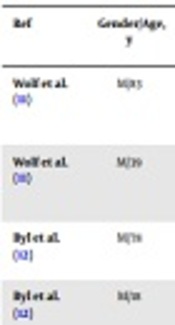 Clostridium difficile infection always manifests as diarrhea associated with antibiotic use. Nevertheless, extraintestinal infections caused by C. difficile are reported. The current report was on a case of C. difficile bacteremia in a 51-year-old male patient with appendiceal perforation and abscess as well as confirmed cirrhosis.

The patient was admitted to the infectious diseases department with repeated abdominal pain associated with fever. His anaerobic blood culture was positive for C. difficile two days after transarterial chemoembolization. The same toxin strain was isolated from stool four days later. Both of the two isolates were confirmed positive for toxin A (tcd A) and toxin B (tcd B) genes by polymerase chain reaction, and identified as ST3 by multiple locus sequence typing. The two strains showed the same susceptibility to the tested antibiotics. The patient was treated with vancomycin intravenously, and got remitted shortly after that. The patient was discharged with good general health conditions and followed up.

A patient with C. difficile bacteremia presenting with appendiceal perforation and abscess as well as confirmed cirrhosis was described, and the microbiological and molecular biological analysis suggested that C. difficile strains isolated from blood came from gut. It is necessary that clinicians detect C. difficile and/or toxins in patients with long terms antibiotic therapy, in case of transformation of intestinal flora, which could cause the infection outside the intestinal tract.

Clostridium difficile are spore-forming, anaerobic, Gram-positive bacilli found ubiquitously in nature. It is transmitted by spores found in low levels in food supply and environment, and is plentiful in healthcare facilities, allowing for both nosocomial and community transmission (1). Over the past decades, the morbidity and mortality of C. difficile infection dramatically increased both in community and healthcare settings worldwide (2). Clostridium difficile infection always manifests as diarrhea associated with antibiotic use (2), and is regarded as the leading cause of nosocomial diarrhea. Its clinical presentations vary from mild diarrhea to severe complications of pseudomembranous colitis and toxic megacolon.

Extraintestinal infections caused by these bacteria are rarely reported, and the reported manifestations include osteomyelitis (3), reactive arthritis (4), breast abscess (5) and C. difficile bacteremia (6). The current report was on a patient with recurrent abdominal pain and fever associated with appendiceal perforation and abscess and cirrhosis; he developed C. difficile bacteremia during hospitalization with microbiological evidence, and underwent subsequent antimicrobial therapy. Furthermore, microbiological and molecular biological evidence of specimens from blood and stool was observed.

A 51-year-old male patient was transferred from another hospital to the infectious diseases department of the study hospital with a one-week history of recurrent abdominal pain associated with fever (temperature up to 39.6°C). He was diagnosed with hypertension, diabetes, and chronic hepatitis B years ago. He was on medication for hypertension and diabetes, but not for chronic hepatitis B. A computed tomography (CT) scan showed appendiceal perforation with abscess, liver cirrhosis, and a left ureteric stone with left hydronephrosis. The patient was treated with latamoxef and ornidazole for five days prior to being transferred.

After admission, the patient still had fever recurrently and his laboratory test results were notable for C-reactive protein (CRP) 201.50 mg/L, white blood cell (WBC) count 18.0 × 109/L, and neutrophil count 15.3 × 109/L. His abdominal circumference was 114 cm, and the patient had an obviously distended abdomen. On admission, biabenan (300 mg every eight hours) was administered as anti-infective therapy. Magnetic resonance imaging (MRI) on hospital day five showed cholecystitis, cirrhosis, and a mass in the right hepatic lobe considered to be hepatoma, and massive ascites. Ultrasound-guided drainage of the ascites was performed on hospital day seven, and the drainage-tube was kept in situ until hospital day 16. Aerobic and anaerobic cultures of samples from the ascitic fluid yielded negative findings.

On hospital day 21, B-scan ultrasonography showed pockets of fluid in the left lower abdomen. On hospital day 24, the patient experienced fever, emesis, and diarrhea. Abdominal MRI showed periappendicular abscess, small bowel wall thickening, and partial bowel adhesion. On hospital day 25, another session of ultrasound-guided drainage of pelvic effusion was performed. A sample of the drained fluid was cultured, which showed the presence of Escherichia coli two days later. On hospital day 29, imipenem and cilastatin sodium (1000 mg every 12 hours) were administered as anti-infective therapy. The patient’s symptoms (fever, emesis, and diarrhea) reduced after the therapy.

The attending physician changed the antibiotics to intravenous vancomycin (500 mg every eight hours) as empirical antibacterial treatment. A stool specimen, which yielded C. difficile two days later, was sent for culture testing at the same time. Both of the tested strains were positive for tcd A and tcd B genes by polymerase chain reaction (PCR) (7). Furthermore, both strains were identified as ST3 by multiple locus sequence typing (8). The antimicrobial susceptibility results showed that the microorganism was sensitive to vancomycin (0.50 µg/mL) and metronidazole (0.38 µg/mL) by the E-test, and the therapeutic schedule of vancomycin was continued for another five days. On hospital day 42, the patient’s abdominal circumference was 94 cm, and the drainage tube was withdrawn. As the patient’s condition stabilized, there was no fever, abdominal pain/ distension or other discomfort, and two consecutive blood cultures yielded negative findings; he was discharged in good general health conditions on hospital day 50 and followed up.

Clostridium difficile always causes antimicrobial-associated diarrhea. Extracolonic C. difficile infection is rare, and the manifestations include osteomyelitis (3), visceral abscess, reactive arthritis (4), and breast abscess (5). Clostridium difficile bacteremia is rarely reported. In the current case, it was speculated that C. difficile invaded the blood stream from the gastrointestinal tract through either the portal system or injured colon wall. For the two strains, from blood and stool, the same toxin profile was observed, ST type and antibiotic susceptibility pattern. The cases of Clostridium bacteremia similar to the current one were reviewed in the PubMed database and listed in Table 1 (5, 9, 10) and Table 2 (10-14) for comparison.

Liver diseases such as cirrhosis and liver cancer could enhance bacterial invasion from the intestine into blood. Cirrhosis or liver cancer seems to be the risk factors for Clostridium bacteremia, especially after local treatment such as transarterial chemoembolization or percutaneous intratumor injection (9). The patient experienced a mass in the right hepatic lobe and cirrhosis obstructed bile flow, which could cause an increase in the intraluminal pressure, multiplication of the organisms within the duct, and direct extension through biliary channels to the liver or seeding into the blood circulation (15).

The current study patient had cirrhosis and liver cancer, and his C. difficile bacteremia occurred two days after transarterial chemoembolization; thus it is thought that the patient possibly got C. difficile bacteremia through the portal circulation (9). However, most of the cases (except case 3) in Table 1 revealed multiple infections after transarterial chemoembolization. But in case 3 no pathogen was isolated from stool sample and she had a left breast hematoma from which C. difficile was isolated. It seems that the pathogen in blood came from the breast hematoma. In addition, C. difficile generally exists in the healthy human colon as a nonpathogenic colonizer (16). It seems that the portal system is not a probable pathway for C. difficile transfer from the digestive tract into the bloodstream.

The underlying liver cirrhosis was independently associated with mortality among patients with monomicrobial Clostridium bacteremia (17). For such patients, timely and appropriate therapy may mean the difference between life and death. In Table 1, all of the patients had severe liver diseases, liver cancer, hepatic resection, or cirrhosis, and their ages to that of the current study patient. Among them, two patients died, one without therapy (case 4) and the other one with failed antibiotherapy (case 1). In the current case, the patient got timely and appropriate therapy, as did the patient in case 2 that underwent percutaneous intratumor injection and also underwent hepatic resection for septic liver necrosis and had a favorable outcome with antibiotherapy (case 2). It seems that severe liver diseases such as liver cirrhosis are associated with the mortality of patients with Clostridium bacteremia instead of enhanced C. difficile invasion from the intestine into blood through portal system.

On the other hand, the current study patient developed appendicitis with perforation, which might have made him susceptible to C. difficile by direct spread through the perforation (6, 11). In Table 2, as other cases of Clostridium bacteremia, spontaneous disruption of gastrointestinal wall, caused by bacteria or surgical therapy (except case 3), was common; the disruption of gastrointestinal wall can be a risk factor for C. difficile bacteremia.

Both of the C. difficile strains isolated from blood and stool cultures were positive for tcd A and tcd B and were also identified as ST3 by multiple locus sequence typing. Strain ST 3 of C. difficile was not the dominant type of C. difficile in the study hospital (ST 54, 23.0%; ST 35, 19.3%; ST 37, 9.9%) (19). It is most likely that the studied patient was an asymptomatic carrier of C. difficile, and the anatomic disruption of the cecum made him susceptible to intestinal flora transplantation, resulting in transient C. difficile bacteremia.

It is believed that long-term use of antibiotics resulted in transformation of intestinal flora. Clostridium difficile disseminated into bloodstream through the appendiceal perforation, and underlying diseases like cirrhosis, liver cancer, and diabetes promoted the translocation of C. difficile. Though Clostridium bacteremia can be transient, it should be approached with caution due to its high risk of mortality in susceptible hosts with cirrhosis not receiving appropriate therapy timely (17). Furthermore, C. difficile may enter distant sites through blood circulation (20), which means that delayed therapy may cause a wider range of infection.

In conclusion, a patient with C. difficile bacteremia presenting with appendiceal perforation and abscess as well as confirmed cirrhosis was described, and the microbiological and molecular biological analysis suggested that C. difficile isolated from blood came from gut. It is suggested that clinicians should detect C. difficile and/or its toxins in patients with long-terms of antibiotic therapy, in case of transformation of intestinal flora, which could cause the infection outside the intestinal tract.

3.2. Limitations of the Case Report

The current case report had limitations: 1) there was only one case; therefore, the relevant evidence was not sufficient. Attention should be paid to collecting similar cases in peacetime; 2) the patient’s relevant information was incomplete, e g, treatment before admission; 3) the current report was a retrospective study, and the collected data were not comprehensive enough. That means the conclusion was not verified enough. Therefore, it is hoped that prospective studies verify or explore and discover the factors of C. difficile invasion into blood.

Authors would like to thank Editage [www.editage.cn] for English language editing. And thanks to the Key Research and Development Program of Zhejiang province (No. 2015C03032) for funding the project.