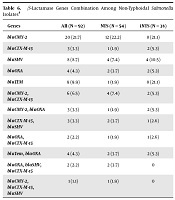 We determined the prevalence, antibiotic susceptibility of NTS and iNTS isolated from stool and blood samples of children aged 2 - 15 years, respectively.

A total of 537 stool and 405 blood samples were collected from 613 children with symptomatic gastroenteritis between January 2016 and May 2018. Samples were subjected to microbiological analysis and antibiotic resistance was determined by the minimum inhibitory concentration (MIC) assay. β-lactamase genes were detected by polymerase chain reaction (PCR).

A total of a total of 213 (39.7%) and 165 (40.7%) stool and blood samples grew Salmonella sp, respectively. Of these; 54 (10.1%) and 38 (9.4%) were identified as NTS and iNTS, respectively. Nalidixic acid (54.3%) resistance was the most the predominant resistance followed by ciprofloxacin (47.8%), cefotaxime (41.3%) and gentamicin (39.1%) among our isolates. The rate of resistance among iNTS was comparable and there was no significant (P > 0.05) difference observed in the resistance pattern between NTS and iNTS isolates. Among the resistant isolates, blaCMY-2gene (32.6%) was the most commonly detected gene.

Overall, Salmonella typhimurium was the predominant species identified and blaCMY-2was the predominant gene amplified by our isolates. The high prevalence and increased resistance especially among iNTS is a cause of concern and reiterates the need to test blood samples along with the stool samples for better management of gastroenteritis.

Non-typhoidal Salmonella (NTS) is a major foodborne pathogen associated with various gastrointestinal diseases both in developing and developed countries (1). Its clinical manifestation ranges from a self-limiting gastroenteritis characterized by vomiting, abdominal pain, diarrhea to serious invasive diseases such as bacteremia, extra-intestinal infections and meningitis (2-4). The occurrence of typhoid fever is more prevalent in developing countries, while NTS infections occur worldwide (5).

The NTS include Salmonella enterica subspecies enterica serotype enteritidis, S. typhimurium, S. newport, S. heidelberg, S. javiana, S. saintpaul, S. montevideo, S. infantis, S. muenchen, S. bareilly, S. braenderup and S. thompson (6). Globally, an estimated 93757000 cases of gastroenteritis and 155000 deaths due to NTS occur each year (1). Infants and young children are more susceptible to NTS infection compared to other age groups, making them a high-risk population (7). About 5% of the NTS infection in high-income countries occurs due to extra-intestinal and invasive NTS (iNTS). The iNTS found in the bloodstream of children is emerging with new pathogenic characteristics (8). Except for immunocompromised patients, the NTS infection does not necessitate antibiotic treatment, while, the iNTS infection requires an antibiotic treatment (9, 10). Similar to other enteropathogens, NTS exhibits an alarming level of increased resistance to various antibiotics especially to those used in developing countries (11, 12).

Resistance to first-line antibiotics including trimethoprim/sulphamethoxazole, chloramphenicol and ampicillin is high among the NTS. Thus, the treatment regimen mainly depends on fluoroquinolones or third generation cephalosporin’s. However, the decreased susceptibility to fluoroquinolones and extended-spectrum beta-lactamases (ESBLs) hampered NTS treatment. According to the US National Antimicrobial Resistance Monitoring System, about 5% of all NTS isolates were reported to be resistant to ceftriaxone (13). The rise of ciprofloxacin resistance has also been reported in both the US (27%) and China (5.5%) (14, 15).

The spread of antibiotic resistance makes it difficult to treat infants and children due to limited availability of therapeutic options, raising serious public health concerns (11, 16, 17). Antibiotic resistance especially due to extended-spectrum cephalosporins has been considered to be a major problem in various geographical regions including North/Western, Asia, Africa, US and Europe (18). In the last decade, the CTXM enzymes (blaCTX-M) which hydrolyse cefotaxime and ceftriaxone and the AmpC β-lactamase (blaCMY gene) which mediates resistance to other b-lactams, chloramphenicol, sulphonamides streptomycin, and tetracycline has gained much importance (18). In Europe and the USA, blaSHV, blaOXA, blaTEM, and blaCTX-Mare the frequently observed ESBLs among NTS (19). The spread of antibiotic resistance and the disease burden caused by NTS especially in children is on the rise worldwide, however, reports from China regarding the antibiotic resistance of NTS is scarce.

The aim of this study was to determine the prevalence, antibiotic susceptibility of NTS and iNTS isolated from stool and blood samples of children aged 2 - 15 years, respectively.

3.1. Isolation and Identification of Non-typhoidal Salmonella

The minimum inhibitory concentration (MIC) for various antibiotics such as gentamicin, amikacin, ampicillin, cefotaxime, amoxicillin, ciprofloxacin, chloramphenicol, co-trimoxazole and nalidixic acid (Sigma-Aldrich, USA) against NTS was determined. The inoculum was prepared by adjusting the turbidity of the overnight culture grown on nutrient agar to that of 0.5 McFarland’s standard. The MIC assay (micro broth dilution method) was performed at a concentration of each antibiotic ranging from 0.03 to 128 µg/mL; using Muller-Hinton broth (MHB, Sigma-Aldrich, USA) as described in Clinical Laboratory Standard Institute (CLSI) guidelines (20). Briefly, 10 µL of culture was inoculated into MHB containing various concentrations and incubated at 37°C for 24 hours. After incubation, MIC was determined visually by the highest concentration showing the absence of growth.

DNA was extracted from the isolated cultures by the alkali lysis method (21). Briefly, a single colony of NTS was suspended in 100 µL of 50 mM NaOH and incubated at 95°C for 1 minute then immediately cooled to 4°C, neutralized with 16 µL of 1 M Tris-HCl (pH 8.0). Then the suspension was subjected to centrifugation for 2 minutes at 14000 rpm, the supernatant was collected and stored at -20°C until further use.

Table 1. Primer Sequence for the Detection of Resistance Genes

Continuous/categorical variables were represented as mean/ranges and numbers/percentages, respectively. Student t-test and ANOVA were performed using MINITAB (MINITAB, Version 13) statistical software. A P value of < 0.05 was considered as statistically significant.

bCould not calculate GM as the exact value is not available.

Non-typhoidal Salmonella is associated with self-limiting gastroenteritis to serious invasive diseases (2-4). In developing countries, diarrheal illness is one of the major causes of morbidity and mortality in children (23). Salmonellosis is considered to be one of the most common infections associated with diarrheal illness posing a serious and significant public health problem especially in children (24). In our study, 18.3% of the children had chronic diarrhea and 11.9% had watery diarrhea. In our study, Salmonella sp. were isolated from 39.7% and 40.7% of the stool and blood samples, respectively. A study from Venezuela which included pediatric patients with acute gastroenteritis reported 15.2% of Salmonella sp. from stool samples which is lower than that reported in our study (25).

The incidence of NTS varies globally. In sub-Saharan Africa, which has a high prevalence of HIV and malarial infections, NTS was the common etiological agent for bacteremia (26). Africa suffers a high burden of NTS infection compared to Asia where the incidence was relatively low. In our study, the prevalence of NTS was 10.1% and iNTS was 9.4%. A study from Northwest China reported NTS prevalence at a rate of 3.75% from the diarrheal patients and 0.31% from the non-diarrheal patients, which was much lower than that reported in our study (27). In contrast, studies from the US (42%) and Shangai (17.2%) reported NTS as the leading cause of bacterial enteric illness, which was much higher than that reported in our study (15, 28). Similarly, a study from the West Indies reported a higher rate of NTS (21.1%) compared to our results (29).

A study from Bangladesh reported iNTS at a rate of 0.2%, which is much lower (9.4%) than that reported in our study, however, the study reported that of the 20 patients who had iNTS infection 5 patients died. The study also mentioned that clinical sepsis, severe acute malnutrition and pneumonia were independent risk factors for NTS bacteremia (30). Kariuki et al. reported that a larger proportion of the iNTS were isolated from children below 3 years which corroborates with our result where 52.9% of our iNTS isolates were from children less than 5 years old (16). Thus, the varying prevalence of NTS infection across various regions suggests that a region-specific approach is required to monitor the prevalence of NTS infections.

Although the predominance of NTS subtypes varies from one geographical region to other, S. typhimurium, S. enteritidis and S. enterica were the three major NTS subtypes commonly isolated from gastroenteritis patients. The SalmSurv, a WHO-supported foodborne disease surveillance network study reported that S. typhimurium and S. enteritidis cause approximately 80% of all the human cases, which corroborates with our results; where S. typhimurium and S. enteritidis were the major sub types identified in our study (32). An alarming increase in the antibiotic resistance by NTS was reported elsewhere (11, 12). In our study, 54.3% of our isolates were found to be resistant to nalidixic acid, which is lower than that reported from India (77%) (22), Southwest China (66.7%) (27), and higher than that reported from Congo (4.3%) (33), Iraq (45.5%) (23), Ethiopia (23.9%) (34), and Iran (31.5%) (17). Among the NTS isolated from stool samples, Nalidixic acid was predominant among our NTS, (64.8%) which was very much higher than that reported from Kenya (6%) (16). In contrast to our results, other studies from South India (8), and West Africa (31), reported that none of their NTS isolates were resistant to nalidixic acid.

Overall, the rate of antibiotic resistance is higher compared to several previous studies. We do not have specific data on the usage of antibiotics for the included patients in the current study. The increased resistance may be due to the fact that as our institute is a tertiary care hospital, there was every possible chance that the patients must be treated in a primary care setting and might be exposed to some antibiotics during the treatment at such centers. Drugs including β-lactams, aminoglycosides and fluoroquinolones have been used to treat various infections and the prolonged use of such drugs may lead to a high rate of antibiotic resistance.

The ESBL and the AmpC β-lactamase in Salmonella sp. have been reported in developing countries including India and Pakistan (36-38). However, data regarding the report of β-lactamase and the AmpC β-lactamase among Salmonella sp. is scarce in China. In our study, 32.6% of our isolates were positive for the blaCMY-2gene and significantly higher than other genes (t-test, P < 0.05). The blaCTX-M-15 was the next predominant gene found in our study. Similar to our study, a study from India reported that blaCMY-2(20.9%) was the predominant gene while blaCTX-M-15 was the next predominant gene amplified by their NTS, however, their rates were much lower compared to our results (22). In the current clinical settings, third-generation cephalosporins are the drug of choice for treating NTS infections, the presence of blaCTX-M-15, which spread among bacteria, especially the co-occurrence of plasmid-mediated ESBL and AmpC which can hydrolyse even carbapenems and pose a serious threat during the treatment of NTS infections. The study is limited by its retrospective and single-center design.

Overall, S. typhimurium was the predominant species identified and blaCMY-2 was the predominant gene amplified by our isolates. In general, invasive isolates exhibit less resistance, however, in our study the iNTS isolated from blood samples showed a similar resistance pattern to that of the NTS isolated from stool samples. Compared to other literature, the high prevalence and increased resistance especially among iNTS is a cause of concern and reiterates the need to test blood samples along with the stool samples for better management of gastroenteritis.