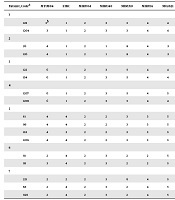 Mycobacterium tuberculosis genotyping is an essential step for understanding the epidemiology of tuberculosis. Mycobacterial-interspersed-repetitive-units (MIRU)-variable-number-of-tandem-repeats (VNTR) typing is an important method for this purpose.

The study aimed to determine the reproducibility of 15-loci MIRU-VNTR method.

This study confirms the high reproducibility of 15-loci MIRU-VNTR, except for limited cases.

Despite the progress in tuberculosis control programs and the development of strong anti-tuberculosis drugs and BCG vaccine, tuberculosis remains as one of the most important infectious diseases in the world with about 10 million morbidities and 1.3 million mortalities annually. To achieve the World Health Organization (WHO) agenda for ending tuberculosis by 2035, molecular genotyping of Mycobacterium tuberculosis can play an important role using different methods such as IS6110 RFLP, spoligotyping and especially mycobacterial-interspersed-repetitive-units (MIRU)-variable-number-of-tandem-repeats (VNTR) typing (1). For the diagnosis of tuberculosis, usually more than one clinical specimen is collected in different days and it is expected that M. tuberculosis genotypes are similar in all the samples. The determination of the genetic similarity of M. tuberculosis in a patient’s specimens can indicate the reproducibility of a method.

The main objective of this study was to determine the reproducibility of 15-loci MIRU-VNTR method in different clinical samples isolated from confirmed patients.

The DNA was extracted from the M. tuberculosis isolates by the boiling technique using 15 primers for MIRU-VNTR and PCR protocols has been used according to Gauthier et al. (3). The PCR product was detected by the 1.5% agarose gel electrophoresis and the copy number of each repeated allele was determined in comparison with the H37RV PCR product as the standard strain. The H37RV strain and distilled water were used as positive and negative controls of the MIRU-VNTR method, respectively (4). All tests were repeated two times unless a disagreement necessitated the third replication. The similarity of MIRU-VNTR panel for samples of each patient was evaluated using MIRU-VNTRplus online software available at http://www.miru-vntrplus.org.

Table 1. Mismatches in 15-loci MIRU-VNTR in 60 Mycobacterium tuberculosis Isolates Collected from Patients with More Than One Clinical Sample in the Southeast of Caspian Sea

MIRU-VNTR is a popular genotyping method for epidemiological purposes. Like any other laboratory test, high repeatability ensures that the results are reliable. In this study, the reproducibility was defined as the same 15-loci MIRU-VNTR patterns in different clinical samples of the same patient. We found that reproducibility was about 71% in our current study. In a few patients, different VNTR numbers were found only on one locus. Since the copy number of each locus in a PCR product was determined with the visualization of its product on the agarose gel, it seems that the mismatch may be due to in-house and manual method. The application of automated MIRU typing may reduce this defect and increase the reproducibility of the MIRU-VNTR method (5).

On the other hand, we found different genotypes in two samples of the same patient. In this case, it seems we faced a tuberculosis patient with mixed infections, which is not the subject of MIRU-VNTR reproducibility rejection. The presence of more than one genotype of M. tuberculosis in the same clinical sample (mixed or polyclonal infection) was defined in a previous study as the presence of more than one allele at one MIRU locus or more (6); however, in this study, the mixed infection was determined in different samples of the same patient collected on different days. It is not clear to us that this case was a true mixed infection or it occurred just because of the contamination of the sample with a new M. tuberculosis genotype; however, it would be very important if it was a true mixed infection.

Our results showed that out of 855 PCR processes that were done to determine the genotypes of 57 independent M. tuberculosis isolates (without isolates coded 88, 221, and 920) by the 15-loci MIRU-VNTR method, mismatch was observed only in 14 cases (1.64%); it means that the reproducibility of 15-loci MIRU-VNTR is more than 98% even with in-house PCR product detection. The reproducibility of a test or a technique can be measured by different methods such as inter-reader, operator-to-operator, lot-to-lot, and run-to-run reproducibility (7).

This research is partly financially supported by the Infectious Diseases Research Center, Golestan University of Iran. In this research Dr. Hesamaddin Shirzad-Aski, Maryam Shafipour and Maesoumeh Taziki have cooperation in collection of sample and laboratory testing, which we sincerely are grateful to them.

Copyright © 2019, Author(s). This is an open-access article distributed under the terms of the Creative Commons Attribution-NonCommercial 4.0 International License (http://creativecommons.org/licenses/by-nc/4.0/) which permits copy and redistribute the material just in noncommercial usages, provided the original work is properly cited.
download pdf 85.54 KB Get Permission (article level) Import into EndNote Import into BibTex
Number of Comments: 0