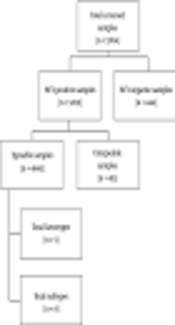 A number of studies on the distribution of hepatitis C virus (HCV) genotypes among the chronically HCV-infected people have reported different patterns from various geographical regions of Pakistan. A relatively large scale epidemiological study was needed in order to figure out the distribution pattern of HCV genotypes.

This research study was carried out to investigate the distribution pattern of hepatitis C virus genotypes in different geographical regions of Pakistan.

Hepatitis C virus (HCV) infection is among hazardous general medical issues around the world, with over 170 - 200 million infected individuals (1), including around 18 million in Pakistan (2). Hepatitis C virus is the main source of liver cirrhosis and hepatocellular carcinoma. It has been assessed to cause around 27% of cirrhosis and 25% of hepatocellular carcinoma cases around the world (3). Approximately 350,000 individuals die from HCV every year (4). Hepatitis C virus belongs to the genus of Hepacivirus in the Flaviviridae family categorized into six noteworthy genotypes and different subtypes. These HCV genotypes and subtypes have variable distribution everywhere throughout the world. Genotype 1a and 1b are the dominant genotypes in the United States and Europe, respectively (5, 6). Hepatitis C virus genotype 2 is particularly prevalent in countries of West Africa (7). Genotype 3a is most abundantly found in Australia and South Asia (8), though genotype 4 is the overwhelming genotype in countries of Northern and Central Africa, especially Egypt. In addition, genotypes 5 and 6 are much of the time found in South Africa and Asia, respectively (7).

As the results of previous studies undertaken in Pakistan are conflicting and all the studies have relied on particular geographical locations with a limited number of samples, we conducted the current study to figure out the existing distribution pattern of HCV genotypes on a relatively larger scale, including 24 different geographical locations of Pakistan. This will help to assist the therapeutic options and will explore the prognostic implications of HCV infection in Pakistan.

This research study was carried out to investigate the distribution patterns of hepatitis C virus genotypes in different geographical regions of Pakistan.

The current study was conducted at Quaid-i-Azam University Islamabad and Comsats University Islamabad in collaboration with biotech molecular diagnostic laboratories Rawalpindi. Blood samples of the patients with a positive history of active HCV infection were collected from various healthcare units from February 2016 to September 2018. Out of 5704, a total of 5259 randomly selected patients from different genders, ethnicity, age groups, belonging to 24 geographical locations of Pakistan were included in the study. Initial screening of patient’s sera, qualitative PCR and genotyping were done in Biotech Molecular diagnostic laboratories Rawalpindi (Figure 1).

RNA extraction was carried out using RNA extraction kit (GF-1, Malaysia) according to the manufacturer’s instructions (GF-1, www.vivantechnologies.com). Synthesis of cDNA and type-specific PCR for the detection of most common HCV genotypes (1a, 2a, 2b, 3a, 3b, 4, 5a, and 6a) were conducted as described (13).

Final PCR products (from viral genotyping and qualitative PCR) were administered to electrophoresis and isolated on 2% agarose gel. After staining with ethidium bromide, the gel was visualized under UV-transilluminator. Hepatitis C virus genotypes were confirmed by matching the amplified product of a specific genotype with a 100-bp DNA ladder marker (Fermentas, USA) as described previously (13).

Descriptive results were expressed in percentages (%). The SPSS version 21 software was used to analyze the data.

Type-specific PCR-based HCV genotyping revealed that the overall existing distribution pattern of HCV genotypes in Pakistan is reported as (3a, untypeable, 3a3b, 3b, 2a, 2b, 1b, 4) as shown in Table 3.

The distribution pattern of HCV genotypes was almost the same in both the gender. However, HCV infection was comparatively more abundant in female patients with HCV (Table 2).

Distribution of hepatitis C virus genotypes by geographical areas (cities) of Pakistan is shown in Table 3.

The existing distribution pattern of hepatitis C virus genotypes in 24 different geographical locations of Pakistan indicated that HCV genotype 3a was the most abundant one with a prevalence rate of (n = 4203, 79.9%) (Table 3). Various investigations have recognized genotype 3a as the most common hepatitis C virus in Pakistan (14, 15). However in 2013 a study revealed that HCV 1a was abundant in the Baluchistan province of Pakistan (11). Contrary to the current study, the studies in 2011 and 2010 have demonstrated an increase in the frequency of genotype 2a, especially in the North-western region Khyber Pakhtunkhwa (KPK) (16, 17). This temporal change in the relative distribution of different genotypes needs upgraded methodologies used in order to develop a comprehensive understanding of HCV genotype distribution and evolutionary trends in Pakistan.

An interesting finding of our observation is the vast number of untypeable genotypes (n = 415, 7.9%) that produced no genotype-specific PCR fragments in our genotyping assay (Table 3). In contrast to our study, a review study in 2011 reported 3.30% untypeable genotypes in Pakistan (18). In the current study all the untypeable genotypes had adequate viral titer showing that the untypeability was not as a result of low HCV levels. Due to the high rate of mutations in the HCV genome, and also different elements (19) the rise of new subtypes or hereditary variations that determine untypeable genotypes by current techniques is inevitable.

There is a critical need not only to overhaul genotyping techniques by utilizing refreshed HCV sequence information, but also to build up a consensus reference genotyping method in order to avoid cross-methodology ambiguities (20, 21). In the present research study, mixed genotype 3a3b infections (n = 355, 6.7%) and 3b (n = 182, 3.5%) HCV genotypes were found in the HCV-infected individuals (Table 3). The number of HCV patients suffering from mixed infections 3a3b and 3b is comparable to that described by Idrees and Riazuddin. In contrast to the current study, in 2008 the report revealed a 4.8% prevalence of mixed 3a3b and 17.5% 3b HCV genotype infections in Pakistan (11, 22). Due to the increasing burden of HCV infections in Pakistan, it seems plausible that mixed genotypic infection will also rise as HCV genotypes do not provide cross protection.

Hepatitis C virus genotype 2a was detected in (n = 92, 1.7%) HCV-positive patients in the current study (Table 3) In contrast to the current study retrospective studies have described a much higher number of HCV 2a from different parts of Pakistan (23). The lower frequency of HCV 2a in our study indicates that the dynamic of HCV 2a infection has also been affected over the past couple of years. Another important finding in our study was the detection of genotype 4a in Faisalabad (Table 3). Hepatitis C virus genotype 4a seems to be very rare in Pakistan. However, in 2018 Wahid et al. (24) in Mardan and in 2010 Abdulkarim et al. (25) in Lahore, reported genotype 4a in Pakistan. The rare occurrence of genotype 4a has been reported in neighboring countries like Iran, Iraq and UAE (26). Regional migration is considered to be the main reason for HCV infection.

In the current study, the distribution pattern of HCV genotype was found the same in both genders with a higher frequency of HCV infection in female patients (Table 2). In contrast to this description of our study, no critical distinction was observed by Idrees and Riazuddin in the frequency distribution of HCV infection in gender and according to their study, variation among genotypes was not observed in this part of the world (11). This could be due to a general lack of awareness and differences in population samples selected for the study (27). When comparing the different age groups our findings demonstrated that high prevalence rate 43.6% of HCV infection was found between the age group of 41 - 55 with a similar genotypic pattern as was found in case of the overall studied participants (Figure 2). Our results are in disagreement with retrospective published studies declaring that the highest frequency of HCV infection was observed in the age group of ≤ 40 years in comparison to ≥ 40 age group (28, 29).

The current study concludes that HCV genotype 3a was the most frequent one in the overall existing distribution pattern of HCV genotypes in Pakistan, which accounts for the majority of the infections. The entire pattern of HCV genotypes distribution was reflected more or less the same way in case of different genders, age groups, and in 24 different geographical locations in Pakistan. The higher frequency of the untypeable HCV genotypes necessitates more accurate genetic characterization of such types in order to devise proper diagnostic and therapeutic strategies against these variants.

The authors of this prospective study would like to acknowledge the contribution of the participating patients.