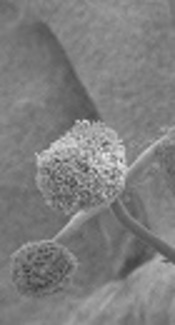 Forty-two PA patients (30 males and 12 females) in the Respiratory Department of our hospital were enrolled in the present study from January 2016 to December 2017. Patients with a hematological disease or granulocytic deficiency were excluded. The average age ± standard deviation (SD) was 62.45 ± 16.09 years. All patients were divided into three groups, including CPA, ABPA, and IPA, according to the consensus on the diagnosis and treatment of pulmonary mycosis (6). Proven IPA was dependent on the histological analysis or positive Aspergillus cultures in sterile sites. Probable IPA met the criteria for a host factor, a clinical criterion, and a mycological criterion, according to the criteria of the European Organization for Research and Treatment of Cancer/Mycoses Study Group (EORTC/MSG) (7). Only cases of proven and probable IPA were included in the IPA group. Clinical features, chest CT, total serum IgE, and Aspergillus species-specific IgE were employed in combination to diagnose ABPA. The underlying lung diseases were comprised of COPD (11/42), bronchiectasis (11/42), TB (6/42), lung cancer (3/42), and interstitial lung disease (3/42).

Table 1. Analysis of BG, GM, and CRP in CPA, ABPA, and IPA patients

Fungal cultures were positive in none of the CPA cases (0/9), 6 ABPA (6/10), and 14 IPA (14/23). One case of A. flavus and five cases of A. fumigatus were identified in the ABPA patients, whereas A. fumigatus was isolated in 14 cases of IPA patients. The number of males was higher than that of females, and the age range was from 50 to 70 years. The clinical characteristics were non-specific. Although the CT findings facilitated an improved PA diagnosis, the imaging results were diverse and non-specific.

The sensitivity of BG and GM tests for the diagnosis of PA in non-neutropenic patients was insufficient. Consistent with Zhou et al. (8), GM antigen levels were greater in BALF as this represented the site of infection. Neutrophils eliminated GM antigens in the serum, which reduced the available levels of detection. Similar to previous studies (9), the median of CRP in IPA patients was the highest, followed in a descending order by that in CPA and ABPA. These findings suggest that CRP could be used in combination with other tests to identify PA.

Sputum fungal cultures were unsuitable for the diagnosis of CPA due to the presence of hyphae that restricted the release into sputum, but the positive rates of the sputum fungal cultures were higher than those of the serum BG and GM in IPA and ABPA. In conclusion, our findings revealed that the symptoms were non-specific. Additionally, the imaging results were diverse, and the microbiological indices were insufficiently sensitive. Therefore, the development and implementation of new indicators or methods to facilitate PA diagnosis are required.