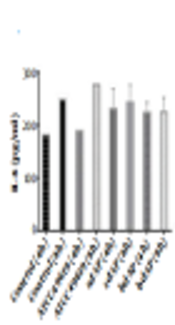 Investigation of the Impact of Streptococcus pneumoniae on A549 Pneumocytes

Streptococcus pneumoniae is a leading pathogen worldwide and its pathogenesis remains unclear.

The study aimed to investigate the secretion of interleukin-8 (IL-8) and soluble intercellular adhesion molecule-1 (ICAM-1) from A549 pneumocytes stimulated by different S. pneumoniae strains and the mechanism of blood-derived S. pneumoniae (bd-SP) in invading the blood system.

Twenty-three clinical strains of S. pneumoniae isolated in 2009 along with ATCC49619 were cultured and suspended in 2018. Then, A549 pneumocytes were resuspended after culture and collection, and inoculated into culture plates. Streptococcus pneumoniae suspensions were then inoculated. Normal saline was blank control. The plates were incubated for four and eight hours. Then, the suspensions were collected and centrifuged. The supernatant was analyzed for IL-8 and ICAM-1 by ELISA.

Streptococcus pneumoniae was recognized as the main cause of community-acquired pneumonia, tympanitis, meningitis, and abscess in 1881, especially in infants and the elderly (1). Approximately, one million children under the age of five years succumb to pneumonia annually worldwide with S. pneumoniae being a major cause of death (2, 3). Streptococcus pneumoniae also thrives in the upper respiratory tract of asymptomatic carriers as an opportunistic pathogen (4). However, it is difficult to predict when it turns pathogenic. This is because the transition from a primary colonization bacterium to a pathogenic bacterium involves a complex interaction between S. pneumoniae and the body's immune system. There are various components associated with S. pneumoniae-induced immune response, such as the capsule and other virulence factors (5-7). In addition, many immune cells such as neutrophils, monocytes/macrophages, and dendritic cells are involved in this process (6, 8-10), which are responsible for the release of factors including IL-1α, IL- 1β, IL-6, IFN-α, IL-8, and ICAM-1 (6, 8).

The incidence of S. pneumoniae infection-induced septicemia and meningitis is about 5%, and its highest mortality exceeds 30% (11, 12). There is limited research on the blood and nervous system invasion by S. pneumoniae, which may be attributed to difficulties in composing clinical cases. As indicated earlier, S. pneumoniae infection inevitably involves the interaction between the body’s immune system and virulence factors.

In this procedure, 1.0 mL of A549 cell concentrated suspension was added to 50 wells of a cell culture plate and two wells were designated as controls. Then, 100 µL of 1.0 McFarland S. pneumoniae concentrated suspension was added to each well while 100 µl of saline water was added to the control wells. Subsequently, the plate was incubated at 37°C with 5% CO2. After four hours, the contents of the first 25 wells (including one control) were transferred into 1.5-mL centrifuge tubes. Next, the tubes were centrifuged at 4,000 rpm for 10 minutes and the supernatants were used for the determination of IL-8 and sICAM-1. After eight hours, the contents of the remaining 25 wells (including one control) were taken and the above-mentioned steps were repeated.

SPSS17.0 software (SPSS, Inc., Chicago, IL, USA) was used to analyze the data. The following criteria were checked: normality at P > 0.10 and homogeneity of variances at P > 0.10. The P values of < 0.05 were considered to indicate statistically significant differences.

IL-8 is a multifunctional proinflammatory cytokine that can be secreted by numerous cells such as mesothelial cells, tumor cells, neutrophils, endothelial cells, and monocytes (8, 16, 17). The main role of IL-8 during inflammatory response is the chemotaxis of immune cells to the site of inflammation, which triggers the release of inflammatory mediators (18, 19). This process is the main response to S. pneumoniae infection, by which the host is capable of removing S. pneumoniae and maintaining homeostasis. In the present study, we found that IL-8 secretion from A549 cells significantly increased after either of sd-SP and bd-SP stimulation.

The IL-8 secretion was significantly higher in either of the sd-SP or bd-SP groups after four hours of stimulation than in the ATCC49619 positive control; however, the IL-8 secretion relatively decreased after eight hours in the stimulation groups. Furthermore, no difference in the IL-8 secretion was observed between the sd-SP and bd-SP groups. In addition, comparing the IL-8 levels between the four and eight-hour stimulations demonstrated that higher levels of IL-8 were secreted as the incubation time increased, suggesting that lung cells may produce IL-8 in both healthy and pneumonic conditions. Lung cells may also be involved in the migration of neutrophils to the lung in response to inflammation via the activation of the NF-κB pathway.

ICAM-1s are distributed to the surface of several cell types including vascular endothelial cells, epithelial cells, lymphocytes, neutrophils, and monocytes, but at low basal levels. Previous studies reported that cross-linking ICAM-1 elicits an association with the actin cytoskeleton and the activation of several intracellular signaling pathways, which triggers the production of numerous cytokines and cell trafficking (19-21). Upon S. pneumoniae invasion, host ICAM-1 may promote the leukocytes’ accumulation towards S. pneumoniae-infected sites, especially extravascular ones (22, 23). Several proinflammatory cytokines including IL-1, IL-11, tumor necrosis factor α (TNF-α), and interferon-γ (IFN-γ) are capable of enhancing the expression of ICAM-1 (24). In the present study, while IL-8 secreted by A549 cells increased and remained stable after four hours of sd-SP or bd-SP stimulation, the sICAM-1 level significantly elevated with the extension of S. pneumoniae stimulation time.

Higher levels of ICAM-1 have a positive role in the assistance of leukocyte accumulation in infectious tissues by promoting the interaction between ICAM-1 and its ligands, which is important for the host to remove foreign microbes (19, 20). It was reported that choline-binding protein A, a protein synthesized by S. pneumoniae that promotes pneumococcal adherence and the colonization of the nasopharyngeal respiratory airways, induced the release of IL-8 and ICAM-1 in A549 cells (19). ATCC49619 as reference S. pneumoniae showed an increasing trend in IL-8 secretion with increasing the duration of S. pneumoniae stimulation, whereas clinical S. pneumoniae reached the peak at four hours and remained stable thereafter. Similar trends of sICAM-1 secretions were observed in ATCC49619 and clinical S. pneumoniae. There was no significant difference in IL-8 or sICAM-1 levels between the sd-SP and bd-SP groups. However, sICAM-1 levels in A549 cells also slowly increased with incubation time but insistently at low expression levels, indicating that ICAM-1 is crucial in the immune response to S. pneumoniae infection.

There are some limitations to our study. First, many types of cell lines are involved in S. pneumoniae-host interactions and their numbers and concentrations are hard to be accurately determined. However, to simulate actual interactions, we used only one fixed concentration of A549 cells. Second, A549 cell line was derived from a lung adenocarcinoma, which, in spite of its capability of self-proliferation, was different from normal pneumocytes for antigen presentation and cytokine secretion. This study demonstrated that S. pneumoniae invasion stimulated the secretion of IL-8 and ICAM-1 in A549 cells. Despite the similar effects of sd-SP and bd-SP on IL-8 and ICAM-1 expression, significant differences between clinical S. pneumoniae and ATCC49619 in our study showed that S. pneumoniae invasion might not be predominantly caused by reactions in the host.

Copyright © 2019, Author(s). This is an open-access article distributed under the terms of the Creative Commons Attribution-NonCommercial 4.0 International License (http://creativecommons.org/licenses/by-nc/4.0/) which permits copy and redistribute the material just in noncommercial usages, provided the original work is properly cited.
download pdf 157.23 KB Get Permission (article level) Import into EndNote Import into BibTex
Number of Comments: 0