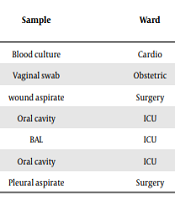 The precise identification of yeasts and their antifungal sensitivity is a key factor in the choice of a suitable drug for treatment and prevention of fungal infections.

The aim of the present study was to determine in vitro susceptibility of clinical Candida albicans isolates to nine antifungal agents.

A total of 61 C. albicans isolates were tested. Antifungal susceptibility was evaluated by determination of minimum inhibitory concentrations (MIC).

Fifty C. albicans isolates were susceptible to nine antifungal agents. The remaining 11 yeasts were resistant to one or more antifungals. All C. albicans were susceptible to amphotericin B with MICs 0.25 to 1 μg/mL and exhibited sensitivity to 5-fluorocytosine with MIC90 of 0.125 μg/mL. The MIC50 and MIC90 of fluconazole were 0.5 and 32 μg/mL, whereas the MIC50 and MIC90 of voriconazole were considerably lower - 0.0078 and 2 μg/mL. The isolates showed susceptibility to echinocandins with MIC90 of micafungin, anidulafungin and caspofungin of 0.015, 0.031, and 0.125 μg/mL, respectively. Of particular interest was detection of seven C. albicans isolates, which expressed a high-level resistance to all azoles and one of them was also resistant to echinocandins.

In conclusion, detection of resistance in C. albicans, which is a species typically susceptible to antifungals, is of great importance for clinical practice.

Microorganisms of genus Candida belong to the normal microbial flora of the oral cavity, gastrointestinal tract, and vagina. Although they normally colonize the human mucosal surfaces, members of the genus could cause a wide range of infections, characterized by different clinical manifestations and severity (1-4). For the needs of the clinical practice, differentiation of Candida albicans and non-albicans species has been accepted. Nowadays, a shift towards non-albicans species is observed, yet C. albicans is the most prevalent species (5-11). According to some current publications, the ratio of isolation of this species among the other Candida spp. is about 50% (5, 6, 9). Candida albicans is still a leading causative agent of candidemias and it is responsible for over 50% of them (12). Therefore, the correct identification and sensitivity testing of C. albicans are key points in the choice of an appropriate drug for prophylaxis and treatment of infections, caused by this species.

Azoles are the most commonly used antifungals and they act by inhibiting the cytochrome P-450-dependent enzyme lanosterol 14-α-demethylase. This enzyme is involved in the biosynthesis of the fungal-specific membrane sterol ergosterol. Fluconazole, a member of the triazole group, is the most commonly used agent for treatment of Candida infections. It has been shown that C. albicans could develop a high-level resistance to azoles, which is associated with the type of infection and previous fluconazole application (10). Echinocandins are a relatively new class of antifungal agents and their mechanism of action is based on inhibiting the β-(1,3)-glucan synthetase enzyme. These antifungals possess fungicidal activity against azole-susceptible and azole-resistant Candida isolates (13, 14). Resistance to caspofungin was first reported in 2005 among Ssaccharomyces cerevisiae, C. albicans, and C. krusei strains (15). Generally, echinocandin resistance in Candida spp. still remains low; less than 3% (16).

According to the Clinical and Laboratory Standards Institute (CLSI) and the European Committee on Antimicrobial Susceptibility Testing (EUCAST), the antifungal susceptibility of Candida spp. should be determined by broth microdilution method, yet disk-diffusion assay and agar-based E-test are also used (5, 6, 8, 17, 18). Recently, CHROMagar Candida was used for isolation and presumptive identification of the main yeast species, yet precise identification and susceptibility testing have to be performed in clinically important fungi.

The aim of the present study was to determine in vitro susceptibility of C. albicans isolates to nine antifungal agents.

The sample of this study was a group of 61 C. albicans isolates collected from various clinical materials of overall 61 patients admitted to University Hospital; Dr. G. Stranski-Pleven, Bulgaria between September, 2016 and December, 2017. This hospital is a 920-bed tertiary-care facility, localized in the central part of Northern Bulgaria. The distribution of the isolates according to the patient specimens was as follows: Urines (15), lower respiratory tract samples (15), throat swabs and oral cavity samples (10), wound aspirates (8), vaginal swabs (6), feces (5), and blood cultures (2).

Minimum inhibitory concentrations (MICs) of Amphotericin B (APH), 5-Fluorocytosine (FCY), Fluconazole (FCA), Voriconazole (VOR), Posaconazole (POS), Itraconazole (ITR), Micafungin (MIF), Anidulafungin (ANF), and Caspofungin (CAS) were tested with Micronaut-AM (MERLIN Diagnostika GmbH, Germany). The prepared yeast suspensions were adjusted to 0.5 McFarland and 100 μL were inoculated to each well of the microplates. The results were read after 48 hours of incubation at 35ºC. The MICs were interpreted according to EUCAST, 2018 (19) with breakpoints in μg/mL as follows: APH susceptibility (S) ≤ 1 and resistance (R) > 1, FCA S ≤ 2 and R > 4, VOR S ≤ 0.064 and R > 0.25, POS and ITR S ≤ 0.064 and R > 0.064, ANF S ≤ 0.032 and R > 0.032, MIF S ≤ 0.016 and R > 0.016. The interpretation of the results for FCY was performed according to the manufacturer’s instruction: S ≤ 4 and R > 32 μg/mL. The EUCAST breakpoints for CAS have not yet been established and it is recommended that isolates that are susceptible to ANF as well as to MIF should be considered susceptible to CAS. For each drug, MIC50 and MIC90 were calculated.

Multidrug resistance was defined as simultaneous resistance to ≥ 1 agent in two or more classes of antifungal agents (1).

The results of susceptibility testing to nine antifungal agents are presented in Table 1 as MIC ranges, MIC50, MIC90, and resistance rates. As shown, the MICs ranges of azoles were very wide: from < 0.002 to >128 μg/mL. The MIC50 and MIC90 for fluconazole were 0.5 and 32 μg/mL, whereas the MIC50 and MIC90 for voriconazole were considerably lower, 0.0078 and 2 μg/mL. The resistance rates of azoles varied from 11.47% for voriconazole and posaconazole to 18.03% for fluconazole. The data about echinocandins showed susceptibility to micafungin, anidulafungin, and caspofungin with MIC90s of 0.015, 0.031, and 0.125 μg/mL, respectively. The tested isolates exhibited sensitivity to 5-fluorocytosine with MIC90 of 0.125 μg/mL. All C. albicans were susceptible to amphotericin B with MICs 0.25 to 1 μg/mL.

Seven C. albicans isolates expressed a high-level resistance to all azoles (Table 2). Surprisingly, one of them was also highly resistant to echinocandins with anidulafungin and caspofungin MICs > 8 μg/mL and micafungin MIC - 2 μg/mL. This multidrug resistant strain (No. 154/17) was recovered from a pleural aspirate of a surgical patient. On the whole, resistant yeasts originated from patients at intensive care units (ICU) and surgical wards.

aThe isolates are presented as Lab No./year of isolation.

The current study presents information about antifungal susceptibility profiles of 61 C. albicans isolates, obtained from different clinical specimens. Of particular interest were the results for azoles, which were characterized with wide MIC ranges and large distinctions in the values of MIC50 and MIC90. However, MIC50s were within the S breakpoints, MIC90s were significantly greater than the R breakpoints - 32, 8, 4 and 2 μg/mL of fluconazole, posaconazole, itraconazole, and voriconazole, respectively. This is due to detection of a few isolates with a high-level resistance to all azoles. Previously published data in Bulgaria indicated fluconazole MIC90 of 8 mg/L (20). This value was observed in testing of 106 clinical C. albicans isolates collected between 2009 and 2013. In a study covered by 35 countries in the period 1997 to 2001, the fluconazole MIC50s for C. albicans were less than 8 μg/mL, yet five countries had populations with MIC90s more than 8 μg/mL (8).

The published data about fluconazole resistance in C. albicans varied widely. Different susceptibilities were found according to specimen types and wards (8, 11). The discrepancies in MIC breakpoints according to the CLSI or EUCAST also influence resistance rates. Therefore, the interpretative criteria are important in comparing the results. On the basis of microbiological and clinical parameters clinical breakpoints (CBPs) have been established for a specific drug and a definitive fungal species. Nowadays, there is a tendency for harmonization of CBPs recommended by the CLSI and EUCAST (21). Using the CLSI agar diffusion assay, Azevedo et al. (5) detected 98% susceptibility in evaluation of 2393 strains, collected from 1999 to 2003. Ying et al. (11) determined 4.3% resistance rate (MICs > 64 μg/mL) among 2170 isolates, obtained between 2005 and 2009, yet the authors observed that yeasts from different specimens and clinical services had various degrees of antifungal susceptibility.

Many publications have also revealed high activity of fluconazole against C. albicans (12, 22-28). On the other hand, Zarei Mahmoudabadi et al. (18) reported only 15.5% sensitivity in testing of 58 urine strains. Kaur et al. (29) determined that among 33 isolates, 12 (36.36%) were fluconazole resistant with MICs > 64 μg/mL. Similar results were presented by Turkish authors; 34% resistance among 201 strains with MICs > 256 μg/mL (17). In contrast, Yuksekkaya et al. (30) reported that 56 urine isolates were fluconazole susceptible with MIC ranges, MIC50 and MIC90 as 0.25 to 4, 0.25 and 0.5 μg/mL, respectively. Recently, the resistance rates in C. albicans have been higher than those previously observed because of establishment of new MIC breakpoints (31).

The current researchers observed that resistance rates of voriconazole and posaconazole (11.47% for both) were lower than that of fluconazole (18.03%). The MIC50 and MIC90 of voriconazole were considerably lower than those obtained for fluconazole. In general, the researchers determined that voriconazole exhibited better activity among the other azoles, yet the MIC90 value was significantly higher than that previously reported in Bulgaria - 0.047 mg/L (20). According to Pfaller et al. (25), voriconazole demonstrates 16- to 32-fold greater activity than fluconazole against yeast species. Similar results were found in other publications (5, 8, 32). The mechanisms of fluconazole resistance in C. albicans have been most extensively studied, whereas those against the other azoles have not yet been clearly defined (10). Many genetic determinants have been investigated, such as point mutations in ERG11, increased expression of ERG11 due to mutations in transcpriptional regulator UPS2, overexpression of drug efflux pumps Mdr1p and Cdr1p/Cdr2p, inactivation of ERG3, aneuploidy and other chromosomal abnormalities (1, 10, 12). High-level fluconazole resistance rarely refers to a single mechanism, thus multiple molecular processes may be involved (12).

In the current study, six isolates (9.84%) were highly resistant to all tested azoles. The current results are similar to those reported by Yenisehirli et al. (17). The authors determined that 29 (14%) from 201 C. albicans isolates were simultaneously resistant to ketoconazole, fluconazole, itraconazole, posaconazole, and voriconazole. Although antifungal resistance usually involves single drugs of the classes, once established, resistance mechanisms could be shared by drugs (33). Larger studies have documented that C. albicans isolates with elevated MICs of fluconazole were generally less susceptible to other triazoles, indicating development of resistance to several drugs of the same class (6, 25, 34). Cross-resistance of all azoles was explained by the expression of the ATP-Binding Cassette (ABC) transporters (i.e., CDR1 or CgCDR1) (35).

The current researchers detected a high-level resistance of azoles and echinocandins in one C. albicans isolate (1.64%). Echinocandin resistance associated with cross-resistance of azoles was reported in C. glabrata (36). The current results are in concordance with the data for a low rate of echinocandin resistance in C. albicans (22, 37, 38). Shokohi et al. (39) detected two (4.6%) caspofungin resistant strains among 44 isolates. However, Taghipour et al. (9) reported that from a total of 43 C. albicans, 15 were resistant to caspofungin, 16 to itraconazole, and 30 to amphotericin B. In a Bulgarian multicenter study, all 204 yeast isolates were susceptible to anidulafungin (20). Echinocandin resistance is uncommon among C. albicans and its genetic mechanism involves mutations in two highly conserved “hot spot” regions of the target gene FKS1, thus molecular testing for FKS mutant strains is recommended (36). The FKS1 mutations, mainly F641S/L and S645F/P/Y, confer cross-resistance among the drugs of the class (40).

In the current study, all tested yeasts were sensitive to amphotericin B. These results could be explained with the fact that this drug is rarely used in Bulgaria. The current data are similar to those reported worldwide (17, 22, 24, 30, 32, 41). In testing 625 invasive C. albicans isolates, Zhang et al. (28) determined only seven (1.1%) amphotericin B resistant isolates, whereas Iranian authors observed resistance rates from about 7% (6), 11% (39) to 30% (42).

Although about 80% of C. albicans were susceptible to nine antifungal agents, a few isolates showed a high-level resistance to all azoles and one isolate was also resistant to echinocandins. Detection of resistance in C. albicans, which is a species typically susceptible to antifungals, determines the need for further monitoring of antifungal sensitivity of clinical yeast isolates in the hospital under study.