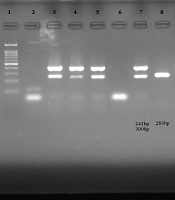 Pregnant women with Chlamydia trachomatis and Neisseria gonorrhoeae infections can vertically transmit these microorganisms to their newborns through the birth canal and cause neonatal conjunctivitis secondary to sexually transmitted infections.

In this cross-sectional study, we aimed to evaluate the prevalence of C. trachomatis and N. gonorrhoeae infections among pregnant women attending a hospital in Tehran, and also determine the vertical transmission rate of these two organisms to the eyes of newborns after vaginal delivery.

Endocervical and conjunctival swabs were collected from pregnant women and their newborns within 24 hours after birth. Demographic and clinical data of participants were obtained using a questionnaire and from the hospital records. Then, DNA was extracted and tested by a multiplex PCR assay to detect C. trachomatis and N. gonorrhoeae in specimens.

Pregnant women with asymptomatic infection of C. trachomatis have a key role in the distribution of chlamydial conjunctivitis in newborns. Since ocular prophylaxis in neonates is not effective for chlamydial conjunctivitis, therefore education and screening of pregnant women, as well as treatment of infected cases, remain as the best approach for controlling the disease.

According to the WHO, annually, more than 330 million new cases of curable sexually transmitted infections (STIs) occur worldwide, which equals to about one million new infections every day (1). Chlamydia trachomatis and Neisseria gonorrhoeae are leading bacterial causes of the STIs with same symptoms among sexually active adults (2). Although infected women carry primarily the major burden of diseases associated with C. trachomatis and N. gonorrhoeae such as mucopurulent cervicitis (MPC), gonococcal or non-gonococcal urethritis (GU or NGU), and pelvic inflammatory disease (PID) with an increased risk of infertility; they are also of concern as potential sources of neonatal conjunctivitis secondary to STIs (3, 4). According to evidence, pregnant women with active, untreated infections of C. trachomatis and N. gonorrhoeae can transmit these bacteria to their neonates during parturition with the risk of about 10 - 50% (5).

Chlamydia trachomatis is the leading cause of vertically transmitted neonatal conjunctivitis with a peak of incidence during the spring and summer months (6). It is estimated that 20 to 50% of neonates with proven exposure to C. trachomatis will develop conjunctivitis after birth (7, 8). The clinical presentations of chlamydial conjunctivitis differ from mild symptoms to severe mucopurulent discharge with inflammation and swelling eyelids (9). Nowadays, less than 1% of all neonatal conjunctivitis is attributed to N. gonorrhoeae. However, ocular infection of newborns with N. gonorrhoeae is associated with a high risk of corneal perforation and might result in blindness if not treated properly (10). Iranian neonates may be at a higher risk of ophthalmia neonatorum (ON) as the result of lacking an ocular prophylaxis program in the country (11). Currently, neonatal ocular prophylaxis and prenatal STIs screening are not carried out routinely in Iran, and only those with clinical symptoms of infections are tested. A previous study has reported that the frequency of ophthalmia neonatorum among hospitalized neonates of 2 hospitals in Tehran is about 4.9% (12).

From November 2017 to January 2018, pregnant women attending the delivery room of Shahid Akbarabadi Hospital in Tehran, Iran. Their infants within 24 hours after vaginal delivery were included in this cross-sectional study. The maternity unit of this public hospital provides comprehensive care to referrals from the middle and low socioeconomic statuses and covers more than 70% of all the deliveries in the southern region of the city (8802 annual live births), which equals to approximately 5 - 10% of the annual birth cohort in the city. Exclusion criteria were cesarean section (C/S) PROM, genitourinary symptoms, and prior antibiotic use. None of the neonates born received prophylactic eye drops. Participation in this study was voluntary, and informed consent was obtained from women for taking part in the study. Demographic and clinical data on the pregnant women were collected by interview, and the main characteristic data of infants were obtained from the medical records.

At first, a gynecologist examined the pregnant women who had the inclusion criteria of the study. Subsequently, a cervical specimen was obtained from each female via inserting and rotating a sterile Dacron swab into the endocervical canal. A pediatrician examined newborns of enrolled women after vaginal delivery and obtained ocular samples by sterile cotton swabs via gentle scraping of each conjunctiva. Obtained swabs were placed separately into the collection tubes containing 1 mL of sterile PBS (Phosphate Buffer Salin, pH: 7.3), mixed well, and transported on ice to the Research Laboratory at the Institute of Immunology and Infectious Diseases (Hazrate Rasool University Hospital) within 24 - 48 hours. On receipt in the laboratory, specimens were vortexed briefly (1 - 3 seconds) and centrifuged for 20 minutes at 4000 × rpm. Subsequently, 100 μL of samples were transferred to a 1.5 mL tube and stored at -70°C until processed.

DNA was extracted from specimens by using a DNPTM kit (Cat No. EX6071, Sinaclon, Iran) according to the manufacturer’s instructions. Eluted DNA in 50 μL TE buffer (Tris-EDTA, pH: 7.5) was stored at -20°C until PCR analysis.

A multiplex PCR (primary m-PCR) with primers KL-1/ KL-2 (targeting 241 bp fragment of the cryptic plasmid in C. trachomatis) and HO1/ HO3 (targeting 390 bp fragment of the cppB gene in N. gonorrhoeae) was performed to detect both organisms in one reaction tube, as described previously (13). Prior to testing of clinical specimens, PCR conditions were optimized as uniplex PCR using the DNA extracts from standard reference strains of C. trachomatis (serovar L2 type strain 434/Bu, ATCC VR-902B) and N. gonorrhoeae (ATCC 11688). Then, m-PCR assay was established with optimized conditions (reaction volumes and annealing temperatures) of uniplex PCR for testing specimens. Briefly, the 50 μL Duplex PCR reaction mixture consisted of 3 μL from each extracted DNA, 25 μL of the master mix solution (Cinnagen Ltd Co., Iran), 1.5 μL of each specific oligonucleotide primer and 13 μL distilled water. In addition, the reaction involved one cycle at 95°C for 5 minutes, followed by 35 cycles of denaturation at 95°C for 35 seconds, annealing at 55.6°C for 40 seconds, and extension at 72°C for 1 minute followed by a last cycle extension at 72°C for 10 minutes. The amplification reactions were performed on a Labcycler PCR system (SensoQuest). Amplified products were analyzed on 1.5% agarose gel through 0.5% TBE buffer and were visualized by DNA safe stain (Cinnagen Ltd Co., Iran) under a UV transilluminator.

The primers and PCR product sizes are listed in Table 1. The electrophoresis pattern of amplified products is shown in Figure 1.

Table 1. The Sequence of Primers Used in This Study To prevent false-positive results due to non-gonococcal strains, N. gonorrhoea positive samples of m-PCR were retested by confirmatory PCR using alternate primers and targeting a 283 bp fragment of the orf gene in N. gonorrhoea (14).

A total of 390 endocervical and conjunctival swabs were collected from 130 pregnant women and 130 newborns (≥ 10% of eligible subjects during the study period), of which ten were excluded from the study (5 women and five newborns) because of missing samples, technical problems and/or insufficient data. Among the pregnant women with the mean age of 27.8 years (range: 16 - 45 years), 26.4% and 20.8% had a history of STIs and abortion, respectively. Additionally, a high proportion of studied women had ≥ 1 child (73.6%). Of newborns, 73 were male, and 52 were female. The mean gestational age and mean birth weight were recorded as 38.2 weeks (SD = ± 2.02) and 3201 g (SD = ± 499), respectively. Symptoms suspicious for conjunctivitis were observed in 4 infants (3.2%).

Clinical symptoms attributable to conjunctivitis were observed in one case (eye discharge and redness). The vertical transmission rate of C. trachomatis from pregnant women to infants was calculated as 18.1% (95%CI: 2.2 - 65.6). Additionally, ocular C. trachomatis infection in newborns was significantly in association with genital C. trachomatis infection in pregnant women (OR= 0.16, 95%CI= 0.03 - 0.7, P = 0.002). Positive PCR results were communicated to the infants' parents, and infected infants underwent further examinations by a neonatologist and ophthalmologist.

Screening for STIs is a public health priority, specifically in the context of pregnant women (15). Several studies have been conducted in our country to investigate the prevalence estimate of C. trachomatis and N. gonorrhoeae infections among pregnant women; however, there are limited data regarding the vertical transmission rate of these two organisms. To our knowledge, this is the first time that vertical transmission rate of C. trachomatis and N. gonorrhoeae infections have been estimated in the capital city, Tehran, Iran. Even though it is important to note some limitations of our study, which should be considered in interpreting our results.

Differences in the socioeconomic status of studied populations and sensitivities of laboratory methods may account for some of these reported variations. In the current study, we found an incidence rate of about 1.6% for C. trachomatis infection in the ocular specimens of neonates. The association between neonatal conjunctivitis and genital infections in pregnant women has been known for over two decades (20). Consistently, our data in this study revealed that ocular infection of newborns with C. trachomatis is significantly in association with chlamydial infection in their mothers (OR = 0.16, 95%CI = 0.03-0.7, P = 0.002). The vertical transmission rate of C. trachomatis that we have estimated in newborns of Tehran (18.1%), is significantly lower than that reported in a similar study from the city of Shiraz, in the southern region of Iran (28 of 37 (75.6%), P = 0.003) (21). Differences in the prevalence rate of C. trachomatis infection in various geographical regions of Iran may justify some part of these variations.

The prevalence estimate of genital N. gonorrhoeae infection in the present study (1.6%) was comparable to the recently reported prevalence of 1.3% and 1.2% among pregnant women of Shiraz and Sabzevar (North-East of Iran) cities (21, 22). However, no neonates with ocular N. gonorrhoeae infection were identified in this study. The relatively low rate of gonococcal infections in pregnant women may justify the absence of ocular N. gonorrhoeae infection in our study. Given the total number of vaginal deliveries recorded during the three months of the study period (n = 1242), we would expect an additional 20 infants with ocular C. trachomatis infection, in keeping with the current study. However, as mentioned earlier, this study was performed at a single site, and participants may not be representative of the whole population in our region.

In the present study, the incidence of ocular C. trachomatis infection among neonates was calculated as 16 cases per 1000 live births. More importantly, both infected infants in this study were born from mothers who were asymptomatically infected with C. trachomatis. Since pregnant women with asymptomatic infection of C. trachomatis have a key role in the distribution of disease, prenatal screening tests that do identify pregnant women at higher risk for developing sequels, as well as education and treatment of infected cases are recommended as the best approach for controlling the disease. Finally, further studies with larger sample sizes and more focused on different causative agents of neonatal conjunctivitis in different parts of our country, Iran is suggested for the future.

The authors are thankful for the help and efforts of the medical staff of the delivery section and laboratory personnel of Shahid Akbarabadi Hospital in the coordination of sampling and specimen storage (Mr. Rahman Yavar and Ms. Zeynab Hasandoost). The authors also thank the participants for their involvement in this project.