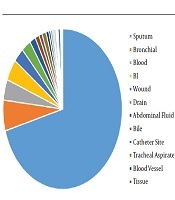 Due to the difficulty of treatment caused by its numerous mechanisms of resistance, only four kinds of antibiotics are recommended for the therapy of Stenotrophomonas maltophilia infections associated with significant morbidity and mortality.

In this four-year study, we aimed to determine the evolution of drug resistance to S. maltophilia base on drug classification guidelines recommended by the Institute of Clinical and Laboratory Standards.

A total of 1876 strains of S. maltophilia was separated from multifarious clinical specimens among January 2016 and December 2019. VITEK 2 Compact microbial system was used for speciation level identification and antibiotic sensitivity test.

Incorrect application of broad-spectrum antibiotics such as trimethoprim-sulfamethoxazole suggests hazard factor for S. maltophilia infections (10). Stenotrophomonas maltophilia strains are naturally resistant to various antibiotics by reason of presence of the sul1 and dfrA gene and genes encoding efflux pumps (11). Furthermore, 6'-N-aminoglycoside acetyltransferase-encoding gene, aac(6')-Iak exhibited decreased susceptibility to aminoglycoside antibiotic and enzymes that appease erythromycin (12). As a result of constant and unreasonable use of the broad-spectrum antibiotics, multi-drug resistance microorganisms have been periodically emerged inside and outside the hospital (13).

Therefore, the purpose of this study is to clarify the distribution of clinical departments and specimens of S. maltophilia in our hospital from 2016 to 2019, and the changes in the resistance rate of antibiotics recommended by CLSI for the treatment of this bacteria.

The current study was conducted in the microbiology laboratory of Central South University Xiangya Hospital, Changsha, China. The hospital is a 3500-bed medical institution that has a commitment to provide the best possible medical care to the provincial capital of Hunan and adjacent area. Therefore, our hospital is a regional medical center with strong technical strength. All in all, it provides health care services to nearly 3.3 million people every year.

The antibiotics to clinical use for S. maltophilia strains proposed by CLSI were involved in the research (3). Judging by the CLSI, minimum inhibitory concentration (MIC) interpretive standard break point of antibiotic resistance for cefoperazone/sulbactam, levofloxacin, trimethoprim-sulfametoxasole, minocycline were generally acknowledged as ≥ 64, ≥ 8, ≥ 4, and ≥ 16 (μg/mL), separately. Escherichia coli ATCC 25922 and Pseudomonas aeruginosa ATCC 27853 were used as recommended strains for antibiotic quality control in entire antimicrobial susceptibility tests.

This research was performed as a retrospectively clinical research. The χ2 test was utilized for assessing the difference between different rates of S. maltophilia strains. P value of less than 0.05 was considered significant and Who-net (version 5.4) statistical pack procedure was utilized for analysis.

Table 1. The Distribution of Clinical Departments of Stenotrophomonas maltophilia in Xiangya Hospital from 2016 to 2019 The distribution of clinical departments of S. maltophilia in Xiangya Hospital from 2016 to 2019

Table 2. The Distribution of Specimen Types of Stenotrophomonas maltophilia in Xiangya Hospital from 2016 to 2019 Table 3. Monitoring of Drug Resistance of Stenotrophomonas maltophilia in Xiangya Hospital from 2016 to 2019

Not long ago, non-fermentative bacteria (P. aeruginosa, Acinetobacter, S. maltophilia and Alcaligenes) have been progressively identified as a decisive reason for hospital infection (14). Various dilemmas are confronted with the therapy of these infections by virtue of multiplex antibiotic resistance of these pathogens (15). Stenotrophomonas maltophilia-related nosocomial infections occur in ICU patients due to mechanic ventilation and immunosuppressed patients, who encounter huge morbidity and mortality rates (16). Innate resistance of S. maltophilia to numerous antibiotics applied to Gram-negative pathogens raises mortality rates to all S. maltophilia infections, notably in bacteremia (17). The mortality rate roughly reaches 41.1% - 50.0% in critically patients with S. maltophilia relevant bacteremia (4, 18, 19).

Stenotrophomonas maltophilia can stick to synthetic facades and develop biofilms, and undoubtedly it has been determined on various hospital equipment just as mechanical ventilation pipeline, arterial catheters, and urinary catheters (20). Most of these body surface-colonized patients in hospital were orally-infected (16/20, 80%) followed by rectal (10.0%) colonization and nasal colonization (10.0%), independently (21). In this situation, it was logical that clinical strains were most likely to come from ICU patients. This survey found that S. maltophilia strains were separated from ICU department (37.05%), neurosurgery ward (10.66%), integrative Chinese and western medicine ward (7.25%), general surgery ward (6.66%), and cadre ward (5.01%). Thus, resistant microorganisms to numerous regularly utilized antibiotics, with high spreading in ICU ward and with ambiguous diagnosis and therapy related S. maltophilia should be regarded as the reason for infection in long-term detention patients, patients with malignant tumors or neutropenia and patients applying broad-spectrum antibiotics such as cefepime.

In the earlier study, clinical isolates from S. maltophilia have been mainly isolated from sputum samples (56.2% of all isolates) (11). Similarly, Gallo SW et al. proclaimed that this pathogen was chiefly separated from tracheal aspirate (55%), blood (15.0%) and sputum (14.0%) samples from a Brazilian Hospital (22). However, Kaur et al. reported that maximal numbers of strains from blood (61.32%) samples along with respiratory samples (26.41%) (23). On the basis of research, in the south central region of China, the most prevailing clinical equipment for desolation of S. maltophilia composes of sputum (70.63%) followed by bronchial (6.18%), broncho-alveolar lavage (4.32%), blood (4.16%), and wound (2.93%). Therefore, S. maltophilia separated from the specimens in the light of the diagnostic principle were recognized as the respiratory microorganism. Stenotrophomonas maltophilia were utmost intermittently isolated from sick persons hospitalized with pneumonia and bloodstream infections from medical centers enrolled in the SENTRY Program (24).

Restrict treatment choices are feasible for the therapy of infections related to S. maltophilia isolates as a result of its instinctive resistance to various antibiotics owning to many kinds of β-lactamase or aminoglycosides, especially it is resistant to certain carbapenem and colistin antibiotics (25, 26). In view of a systematic review and meta-analysis of non-randomized researches, trimethoprim-sulfamethoxazole manifested commensurate outcomes on rehabilitation of S. maltophilia infection to fluoroquinolones that is considered to be the most effective antibiotics for S. maltophilia (27).

In another study, levofloxacin was found to be the most effective antibiotic against S. maltophilia strains with resistance rate of 7.6%. The resistance rates for other antibiotics were as follows: chloramphenicol 18.2%, trimethoprim-sulfamethoxazole 20.3%, and ceftazidime 72% (31). When SXT is not an adequate first-line treatment choice of patients, levofloxacin could be alternately accepted as an applicable medical choice of S. maltophilia infections (32). A study displayed that S. maltophilia is insusceptible to various antibacterial drugs in Turkey of 118 strains detached from different clinical samples between 2006 and 2012. The therapy of infections provoked by S. maltophilia should be adopted primitively as TMP-SXT, chloramphenicol, and levofloxacin independently (31). In Najran Saudi Arabia, the utmost effective antibiotics were tigecycline (93.7% sensitivity) and trimethoprim/sulfamethoxazole (100% sensitivity) between 2015 and 2016. However, the results of this study indicate that minocycline is considered to be the most effective antibiotic for the treatment of S. maltophilia with a drug resistance rate of 0.3%.

Quinolones are synthetic antibiotics, and the leading reason for resistance to these drugs is mutation of the genes encoding their purposes. Nevertheless, in opposition to the case for other isolates, such mutations have not been detected in quinolone-resistant S. maltophilia strains, in which overabundance of the SmeDEF efflux pump is a dominant source of quinolone resistance (33). The above data indicate that the antibiotic resistance of S. maltophilia isolated from clinical specimens in the central south of China is significantly different from that in other regions. Different antibiotic susceptibility results appear due to different drug sensitivity programs and reference standards used in different places. Early recognition of S. maltophilia is particularly significance. The use of antibiotics to which this microorganism is ingenious wipes out the infection and alleviates avoid graft failure (30). Exact recognition and susceptibility programs of S. maltophilia are essential for the supervision of infected patients and avoidance of transmit of this nosocomial microorganism (34).

This study was only retrospectively analyzed in a single center in central south China, and the resistance data for the cross-regional multi-center S. maltophilia was more credible.

The study demonstrated that S. maltophilia can be detected in a variety of specimen types of different clinical departments, with the most detected in ICU patients and sputum specimens. Moreover, S. maltophilia was sensitive to minocycline and levofloxacin, but the situation of cefoperazone/sulbactam resistance was not optimistic. Sometimes we have to consider that it may not be used to treat certain infections caused by S. maltophilia. It is worth noting that we need to prompt clinicians to target the treatment of S. maltophilia based on the results of drug susceptibility testing, and to strengthen its drug resistance monitoring and dynamic changes in drug resistance.