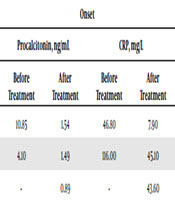 Malaria is the parasitic disease caused by Plasmodium infection, and is transmitted to humans through the bite of female anopheles. At present, malaria remains the most important cause of disease and death among children and adults. Approximately 214 million people are infected with malaria worldwide.

This study aimed to analyze the distribution level and compare procalcitonin and C-reactive protein (CRP) in malaria patients before and after treatment, with focus on discussing the prognostic value of procalcitonin recovery level for recrudescence within two weeks of antimalarial treatment.

A retrospective analysis was adopted. We measured the procalcitonin and CRP inflammatory markers of 22 imported malaria patients, who were hospitalized in our hospital from January 2014 to February 2018. The trends of procalcitonin and CRP levels in three malaria patients before and after antimalarial treatment and during recrudescence were applied.

The procalcitonin and CRP serum levels were significantly elevated among malaria patients. The majority of the patients recovered to the normal level within two weeks after effective antimalarial treatment and no longer suffered from recrudescence. However, the procalcitonin recovery level within two weeks after antimalarial treatment remained > 0.8 ng/mL. Hence, heightened alertness should be given to recrudescence.

Malaria is a parasitic disease caused by Plasmodium infection, and is transmitted to humans through the bite of female anopheles. At present, malaria remains the most important cause of disease and death among children and adults. Approximately 214 million people are infected with malaria worldwide, making it one of the serious infectious diseases (1) threatening human health. There was no objective indicator for the evaluation of severity and prognosis of malaria formerly. According to a number of research bodies in recent years, procalcitonin and C-reactive protein (CRP) have relatively high values in the diagnosis and severity assessment of malaria (2-4).

Due to the induction of lipopolysaccharides and other toxic metabolites, as well as various inflammatory mediators in the systemic inflammatory response, organs and tissue cells outside the thyroid gland can produce a large amount of procalcitonin and inhibit its decomposition into calcitonin; this significantly increases the level of procalcitonin in serum. Assicot et al. (5) reported for the first time in 1993 that the serum procalcitonin content is closely related to infectious diseases, especially in the inflammatory response to bacterial infection. Later studies (6) also found that procalcitonin is related to the severity of infection and its dynamic changes are related to the prognosis of infection. Procalcitonin is also increased in neuroendocrine tumors, non-infectious systemic inflammation, trauma, parasitic infection, and other diseases (7, 8).

Hence, our retrospective study was performed in malaria patients: who were treated and followed-up in our hospital. The results of this study also support the above relevant research perspectives. However, we observed that the procalcitonin level of some clinical patients still fails to recover to the normal level within two weeks after antimalarial treatment and patients suffer from recrudescence, indicating that the procalcitonin recovery level has higher clinical value for the anticipation of malaria recrudescence.

We recruited 22 imported malaria patients visiting Taixing People’s Hospital from January 2014 to February 2018. Eight patients were from Congo, nine patients from Angola, one patient from Pakistan, and four patients from other African countries. All patients were male, with the age range of 20 - 48 and an average age of 27.2 ± 4.8. Chills and fever were the main symptoms in the patients. All 22 patients had a fever with a body temperature of 38.1 to 41.5ºC. Moreover, 18 (81.8%) patients showed chills or shivering and 20 patients (90.9%) showed muscle ache. Eight (36.4%) patients had various degrees of gastrointestinal symptoms, including vomiting, appetite loss, and diarrhea and one (4.5%) patient suffered from renal failure.

Blood samples were collected to make thick blood membrane and thin blood membrane slices, and then hemolytic staining was carried out. Finally, the diagnosis was made based on the presence of Plasmodium parasites in the thick blood membrane under the oil lens of the microscope. Thin blood membrane was only used as the reference examination for the classification of protozoa. Malaria control professionals from the center for disease control and prevention completed the epidemiological case investigation and blood sample review within three days. Finally, the malaria diagnostic laboratory of Jiangsu province carried out microscopic examination and PCR test in blood slides and blood samples. Plasmodium antigen detection was based on colloidal gold immunochromatography. The kit was produced by Guangzhou Wanfu Biotechnology Co. Ltd. A Roche Cobas E601 automatic electrochemical luminescence analyzer and an auxiliary reagent (Elecsys BRAHMS procalcitonin, Roche Diagnostics GmbH) were used to determinate the procalcitonin content of the serum. It was considered positive if the procalcitonin concentration was > 0.5 ng/mL.

All patients received 80 mg (double for the first time) of artemether once a day through intravenous injection or intravenous drip, and subsequently received the quinine compound preparation. Then, symptomatic supportive treatment was performed, according to their respective complications.

The procalcitonin and CRP markers were determined at 7 - 14 days’ hospitalization and 3 - 6 months’ follow-up after discharge, as follows: the content before antimalarial treatment, the minimum content within two weeks after treatment, and the content during recrudescence.

Table 1. Comparison of Procalcitonin and CRP Markers of Malaria Patients Before and After Treatment (N = 22)

Table 2. Distribution of Procalcitonin and CRP at Time Nodes of Recrudescence Patients

The malaria situation in China mainly manifests imported malaria, and the majority is falciparum malaria, which is due to infection from malaria endemic areas. Plasmodium falciparum can cause immune vascular injury and release cytokines such as TNF-α and IL-1, which directly stimulate and induce the release of procalcitonin. Severe cases may be related to the type, amount, and duration of exposure to Plasmodium parasites (18), leading to relatively severe damage and higher procalcitonin levels. A study by Hua-Yun et al. (19) on the malaria situation in Jiangsu showed that among 308 patients, only one patient was infected through blood transfusion, while the rest suffered from imported malaria, with falciparum malaria accounting for 77% (237/308) of the cases. Patients with falciparum malaria can more easily suffer from recrudescence, and a part of initial patients would suffer from malaria due to the mass propagation of a small amount of Plasmodium in the erythrocytic stage remaining in the body under certain conditions (20).

A study by Xie et al. (21) on the clinical features of 56 patients with imported malaria showed that 16.7% of the patients suffered from recrudescence after cure. The recrudescence mechanism of malaria is more complicated, and is generally considered to correlate with many factors, such as the species of infectious Plasmodium, antigenic variation of Plasmodium, non-standard use of antimalarial drugs, drug sensitivity, and decrease in the host’s specificity immunity (22). In recent years, many studies (23-25) have found that some malaria patients suffer from recrudescence due to the decreased sensitivity to artemisinin and resistance to drugs. During the recrudescence, missed diagnosis may be due to the low early positive rate of peripheral blood smear and different malaria cycles, time of blood sampling and inspection staff level. Plasmodium circulating antigen detection and PCR are difficult to be widely applied due to their technical difficulties.

In the practical clinical work, there is an urgent need for a more objective, convenient, and low-cost auxiliary diagnostic marker for the early determination of malaria recrudescence, providing an alert for clinicians, shortening the patient’s confirmation time, and allowing the patient to receive timely antimalarial treatment. There are many studies on procalcitonin respecting bacterial infections. Recent guidelines recommend procalcitonin levels of 0.5 ng/mL as a reference point for systemic bacterial infection (11). In terms of procalcitonin guidance for the use of antibiotics, studies (26, 27) recommended that the primary calcitonin concentration should be reduced by 80% or more than its peak value or reduced to 0.5 ng/mL or lower; then, antibiotics should stop. However, if the procalcitonin concentration is still > 0.5 ng/mL, maintenance or sequential treatment may be required. Whether there is the same reference significance for malaria patients, no relevant research report has been found.

It was found from our study that patients with a procalcitonin level of < 0.5 ng/mL and 0.5 - 0.8 ng/mL within two weeks after antimalarial treatment accounted for 59% and 23% of the patients, respectively, and they did not suffer from recrudescence during the follow-up visits. However, the minimum procalcitonin level in three patients who suffered from malaria recrudescence failed to recover to the normal level within two weeks after treatment and it was still > 0.8 ng/mL. In the present study, the investigators suggest that when procalcitonin levels remain > 0.8 ng/mL or increase gradually through dynamic observation within two weeks after antimalarial treatment, heightened alertness should be given to recrudescence, and blood smear microscopic examination should be carried out repeatedly to determine Plasmodium. It would also be necessary to adopt the nucleic acid probe and other techniques early.

Considering that the overall sample of the research was limited, when the procalcitonin level would be taken as the evaluation index for the prognosis of malaria recrudescence after antimalarial treatment, it would be necessary to enlarge the sample for further verification, and define a more reasonable threshold.