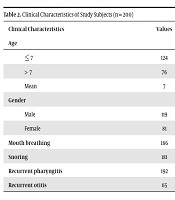 Identification and Detection of Pathogenic Bacteria in Adenoid Tissue of Adenoidectomized Children: Emergence of Staphylococcus aureus as the Most Prevalent Pathogen

Adenoids act as reservoirs for pathogenic bacteria and chronic adenoid infection leads to its hypertrophy.

The present study aimed to determine the frequency of Staphylococcus aureus, Haemophilus influenzae, Moraxella catarrhalis, and Streptococcus pneumoniae in children by polymerase chain reaction (PCR) and culture and to determine the antimicrobial resistance patterns of the isolates.

In this cross-sectional study, 200 adenoid tissues were taken from children with adenoid hypertrophy in the operating room under general anesthesia conditions. The isolation and detection of bacteria were performed by culture and PCR methods. The antibiotic susceptibility patterns of the isolates were determined by the disc agar diffusion method according to the CLSI guidelines.

Adenoid hypertrophy is a common childhood disease, with a 2 - 3% prevalence (1). The adenoid tissue as part of the Waldeyer ring belongs to the lymphatic system in the posterior nasopharynx (2). Adenoids and tonsils include the first-line defense against various microorganisms entering the body through the mouth or nose (3). The etiology of adenoid hypertrophy has not been fully understood although there is a relationship between adenoid enlargement and microbial agents, allergies, genetic predisposition, external stimuli such as smoking, and rarely neoplastic proliferation (4, 5). Adenoid hypertrophy can lead to the nasopharynx obstruction and cause symptoms including snoring, Rhinorrhea, nasal congestion, mouth breathing, halitosis, hyponasal speech, restless sleep, hypersomnolence, and enuresis. It also plays an important role in chronic rhinosinusitis and middle ear infection with effusion (6). In most cases, the removal of a local reservoir of pathogenic microbiota such as adenoid and tonsils decreases the clinical signs and symptoms of affected patients (7).

Considering the adverse effects and complications of adenoid hypertrophy in children and the importance of these bacteria, the present study aimed to determine the frequency of S. pneumoniae, H. influenzae, M. catarrhalis, and S. aureus in children by PCR and culture and to determine the antimicrobial resistance pattern of the isolates.

3.1. Sample Collection and Isolation of Bacteria

In this cross-sectional study, a total of 200 children were diagnosed with adenoid hypertrophy and referred to the Department of Otolaryngology of Imam Sajjad Hospital, affiliated to Yasuj University of Medical Sciences, during January 2017 and February 2018. Children with immunological defects, anatomic abnormality, respiratory infection, antibiotic therapy two weeks before and at the time of the surgery were excluded. Adenoidectomy was performed in the operating room under general anesthesia conditions. The adenoid tissue was removed under an aseptic condition and placed into a sterile container to sent to a microbiology laboratory.

The adenoid tissue of each patient was homogenized with tissue grinder, and then inoculated in specific culture media for the primary isolation of bacteria. Mueller-Hinton agar with 5% sheep blood was used for the primary isolation of S. pneumoniae and S. aureus. For S. pneumoniae, plates were incubated at 37°C in the presence of CO2 for 24 to 48 hours and then identified by conventional biochemical tests such as alpha hemolysis, catalase test, susceptibility to optochin (5 μg) and bile solubility. Staphylococcus aureus was identified with the catalase test, tube coagulase, DNase test, and mannitol fermentation (16) and finally confirmed by the detection of the nucA gene (17).

Chocolate agar containing vancomycin (5 mg/mL), clindamycin (1 mg/mL), and bacitracin (300 µg/mL) was used for the primary isolation of H. influenzae in candle jar with 5% carbon dioxide. Biochemical tests such as catalase, oxidase, requirements for X and V growth factors, and fermentation of sucrose and glucose were used for the identification of this bacterium (18). Chocolate agar with vancomycin (5 µg/mL), clindamycin (1 µg/mL), bacitracin (300 µg/mL), and acetazolamide was used for M. catarrhalis (19). Before adenoidectomy, past medical histories and demographic data of patients were collected from their medical records. Besides, clinical data including snoring, mouth breathing, recurrent pharyngitis, and ear infections were recorded.

The DNA was extracted from adenoid tissue according to Bartlett et al. guidelines (20). Multiplex polymerase chain reaction (PCR) was used for the detection of S. pneumoniae, H. influenza, and M. catarrhalis according to the 16SrRNA gene-specific primer designed before by Hendolin et al. (21). The primer sequences used in this study are shown in Table 1. The PCR assay was carried out in a 25 µL total volume containing 12.5 µL master mix (Amplicon, Denmark), 25 ρmol of each primer, and 5 µl of template DNA. The PCR conditions were as follows: initial denaturing at 94°C for 5 minutes, followed by 35 cycles of denaturing at 94ºC for 30 seconds, annealing at 60ºC for 45 seconds, and extension at 72ºC for 40 seconds. The final extension continued at 72ºC for 5 minutes using a thermocycler (BioRad, T100, USA). The PCR products were separated by electrophoresis in the 1.5% agarose gel stained with DNA safe stain, and then visualized under UV light using the gel documentation system (Major Science, Taiwan).

Totally 200 children with adenoid hypertrophy were included in this study. The patients’ age was between 1 and 14 years with a mean age of seven years. Of these, 119 children were male and 81 children were female. There were 124 patients under seven-years-old. Of 200 patients, 186, 181, 192, and 65 had mouth breathing, snoring, recurrent pharyngitis, and recurrent otitis, respectively. The clinical characteristics of patients are shown in Table 3.

Table 4. Isolation and Detection of Bacterial Pathogens by Polymerase Chain Reaction and Culture in 200 Children with Adenoid Hypertrophya

In the present study, S. aureus was the most prevalent isolate identified in 51% of children with adenoid hypertrophy, which was more than earlier reports from other countries: Brazil (2.7%), Turkey (22.2%), Poland (34%), India (34%), The United States (33.3% and 8.8%), Hungary (15%), and Iraq (23.6%) (7, 13, 23-28). This study showed the importance of S. aureus in the etiology of adenoid hypertrophy. The variation in the frequency of this bacterium among different countries may be due to the different health care programs in various geographical locations. Staphylococcus aureus has many factors, including the presence of various compounds in the cell wall, such as teichoic acid and microbial surface component recognizing adhesive matrix molecules (MSCRAMM), which cause the long-term colonization of this bacterium in body tissues.

Other mechanisms, such as intracellular survival and localization of bacteria within the biofilm, protect bacteria from the effects of host immunity and antibiotics and increase bacterial survival and colonization in the adenoid tissue (7). Besides, the long-term duration of adenoid hypertrophy can help the colonization of S. aureus in adenoid tissue and lead to chronic infection. In our region, it seems that children with adenoid hypertrophy referred to otorhinolaryngologists at the end stage of the disease and most adenoidectomy procedures were performed with a delay during summer vacation. This lateness can cause the colonization of S. aureus and the gradual emergence of this bacterium as a prevalent organism. Besides, 6.8% of S. aureus isolates were identified as MRSA. Lin et al. reported that MRSA adenoiditis may be associated with adenoid hyperplasia and biofilm formation (29).

Streptococcus pneumoniae was the second prevalent organism in this study isolated from 22% of patients, which is less than the reported values from Turkey (60.9%), Poland (64%), United States (50%), and India (39%) but higher than previous reports from the United States (16.6%) and Hungary (15%) (11, 23-27). One of the reasons for differences in the frequency of S. pneumoniae among different studies is related to the use of pneumococcal vaccines in children. The isolation rate of M. catarrhalis in this study was 16.5%, which is lower than that reported in similar studies from Turkey (19.5%), Poland (18.5%), and United States (38.3% and 8.3%) but higher than a report from India (13%) (11, 23-26). In contrast to the results of this study indicating H. influenzae in only 3% of patients, many studies reported that H. influenzae was isolated in higher percentages in Poland, United States (two studies), Hungary, and Iraq with isolation rates of 73%, 60%, 66.7%, 50%, and 11.6%, respectively (23, 25-28). Local health care programs, diversity in geographical regions, and national vaccination programs for children can affect the prevalence of bacteria in the respiratory tract and adenoid tissue.

Few studies have investigated the role of bacteria in adenoid tissue by the PCR method. The detection rates for S. pneumoniae, M. catarrhalis, and H. influenzae in this study were 15.5%, 11%, and 4%, respectively, which were much lower than the rates in a study from Brazil (58.5%, 2%, 37%, and 49%, respectively). Also, S. aureus was detected as 40.5% in this study, which is much higher than that in Brazil (5.8%) (7). Antimicrobial susceptibility testing of bacteria in the present study showed that S. aureus, S. pneumoniae, M. catarrhalis, and H. influenzae had the highest sensitivity to fluoroquinolones (ciprofloxacin and levofloxacin). This may be due to the limited use of this group of antibiotics in children because of their potential arthropathy in juvenile animals (30). In total, S. pneumoniae and M. catarrhalis had high rates of resistance to cotrimoxazole. While all of the H. influenzae isolates were sensitive to all of the tested antibiotics, some strains of S. pneumoniae were resistant to clindamycin and penicillin and M. catarrhalis strains to rifampicin. Staphylococcus aureus strains isolated in this study were also highly susceptible to gentamicin, trimethoprim-sulfamethoxazole, clindamycin, amikacin, rifampin, and linezolid, while all of the isolates were resistant to penicillin and 31% to tetracycline. Because of the diversity of bacterial pathogens in adenoid tissue and predominance of S. aureus in this study, antibiotic treatment needs bacterial evaluation, culture, and antibiograms.

This study was supported by the Deputy of Research and Technology, Yasuj University of Medical Sciences. The ethical approval ID was IR.YUMS.REC.1396.69.