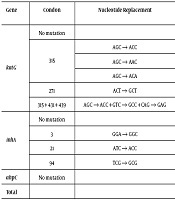 Mycobacterium tuberculosis is a pathogen that causes Tuberculosis and can invade various organs in infected patients. Its high morbidity and high mortality seriously threaten human health. In recent years, the continuous emergence of drug-resistant Tuberculosis bacteria has brought severe challenges to the prevention and control of Tuberculosis.

This study aimed to characterize the most frequent mutations of the katG, inhA, and ahpC genes in isoniazid (INH)-resistant M. tuberculosis clinical isolates in Shanghai Pulmonary Hospital, China, and investigate the relationship between gene mutations and the minimum inhibitory concentrations (MICs) of INH against M. tuberculosis.

Multidrug-resistant tuberculosis is defined as resistance to at least two first-line drugs rifampicin (RIF) and isoniazid (INH). Mycobacterium tuberculosis resistance is mainly caused by drug activating enzymes or drug target mutations (3). Until today, INH is still the cornerstone of modern tuberculosis chemotherapy. However, M. tuberculosis is becoming more resistant to INH (4). A variety of genes are involved in M. tuberculosis resistance to INH. It is reported that frequent mutations primarily focus on the katG and inhA regulatory regions while very few mutations occur in the ahpC gene (5). KatG has a length of 2223 bp and synthesizes a catalase-peroxidase enzyme, which is involved in the synthesis of mycolic acid (6) while inhA is involved in the synthesis of fatty acids (7).

The study determined the frequency of mutations in three specific resistance genes (katG, inhA, and ahpC) in M. tuberculosis strains and assessed the correlation between the minimum inhibitory concentration (MIC) of antibacterial drugs and different mutation sites.

We collected 92 INH-resistant and 30 INH-susceptible clinical isolates of M. tuberculosis from the library of strains in Shanghai Pulmonary Hospital. All 122 strains of M. tuberculosis were isolated from patients with pulmonary tuberculosis during the period between January and June 2018. Each strain corresponded to a single patient. We identified all strains as M. tuberculosis using the mycobacteria growth indicator tube (MGIT) liquid culture method (BD Biosciences, New Jersey, USA) and MPT-64 antigen detection. The 16SrRNA sequence was then amplified to confirm the previous identification results. All strains were cultured on Lowenstein-Jensen (LJ) and MGIT liquid media for subsequent experiments.

Cultures on the LJ medium were collected and tested for drug susceptibility to first-line drugs, RIF, ethambutol (EMB), and INH, as well as second-line drugs, ofloxacin (LFX), moxifloxacin (MOX), amikacin (AMK), kanamycin (KAN), ethionamide (ETH), and cycloserine (CYC). Drug susceptibility testing was performed using the broth microdilution method and Roch broth containing OADC (oleic albumin dextrose catalase) supplement (Thermo, USA). The critical concentrations of these drugs were as follows: 1 µg/mL for RIF, 5.0 µg/mL for EMB, 0.2 µg/mL for INH, 2.0 µg/mL for OFX, 0.5 µg/mL for MXF, 4.0 µg/mL for AMK, 5.0 µg/mL for KAN, 5.0 µg/mL for ETH, and 25.0 µg/mL for CYC. If MICs of INH were > 0.2 µg/mL, the strain was considered resistant according to the WHO recommendations. Pan-susceptible M. tuberculosis strain H37Rv (ATCC27294) was used as a reference.

The frozen isolates were subcultured on the LJ medium for four weeks. The crushed bacterial colonies were recovered in 200 μL of 1 × TE (Tris-EDTA) buffer and boiled at 100°C for 10 minutes to inactivate bacteria and release the mycobacterial DNA. The recovered DNA was immediately used for PCR amplification stored at -20°C until use. The M. tuberculosis reference strain H37Rv was used as the control.

3.4. PCR Amplification and Sequencing of katG, inhA, and ahpC

The PCR mixture was prepared in a volume of 50 µL as follows: 25 µL 2 × PCR Mixture (Sangon, Shanghai, China), 2 µL of DNA template, and 2 µL of DNA template. The reaction was carried out in a thermal cycler, as follows: 94°C for 5 minutes, followed by 35 cycles of denaturation at 94°C for 30 seconds, primer annealing (katG at 61°C, inhA at 63°C, and ahpC at 53°C) for 30 seconds, extension at 72°C for one minute, and final elongation at 72°C for 10 minutes. The PCR products were separated by 1% agarose gel electrophoresis. A positive product of the target gene fragment was sent to the company (Tsingke, China) for sequencing. Resulting sequences were compared with wild-type sequences of M. tuberculosis H37Rv using Bio-Edit software (version 7.0.9).

All statistical analyses were performed using SPSS (V 20.0; SPSS Inc.). Data were compared by the χ2 test. For all analyses, a P value of < 0.05 was considered statistically significant.

Table 2. Prevalence and Mutation Profile in the katG, inhA and ahpC Genes in Isoniazid-resistant Mycobacterium tuberculosis Clinical Isolates in Shanghai

4.2. Mutations in the katG, inhA, and ahpC Genes

Table 3. Comparison and Statistics of the Results of katG Gene Sequencing Among the Three Groups

Anti-tuberculosis drug resistance poses a major threat to human health. It is usually caused by a change in the drug target due to a mutation in the chromosomal gene of M. tuberculosis. Information on the genetic diversity of M. tuberculosis plays an important role in controlling tuberculosis (8). This can help us monitor the disease, determine the origin and spread of pathogens in the area, and effectively prevent and control the disease. Mycobacterium tuberculosis resistance to INH is associated with mutations in several genes. Isoniazid is known to cause the exclusive lethal action to M. tuberculosis cells because of the pathogen’s own catalase-peroxidase (katG) enzyme that converts INH to a very reactive radical. Isoniazid is a pro-drug and its activation in a cell is performed by catalase-peroxidase, coded by the katG gene in M. tuberculosis (9). Mutations in the inhA regulatory region are known to induce overexpression of inhA and promote INH resistance by increasing the number of target molecules (7, 10). Mutations in the katG and inhA genes are most clinically relevant and determine resistance in most clinical isolates (11, 12).

In our study, 64 (69.6%) isolates had an amino acid substitution in katG. The prevalence of mutations in katG varies strongly among different regions of the world. The mutation rate was 98% in Russia (13), 66.7% in Finland (14), 60% in South Africa (15) and other areas of China (16), and 46% in Switzerland (17). Our results were similar to results from Finland, South Africa, and other areas of China, but lower than the result from Russia and higher than the result from Switzerland. The differences in clinical medication habits in different countries and limitations of selected experimental strains may be the main reasons for the inconsistent incidence of katG gene mutations. Of particular interest, a vast majority of isolates showed a Ser to Thr (AGC → ACC) substitution at codon 315 (63.0%). This is consistent with the results reported previously (18, 19). We also detected mutations at codons 315, 431, and 439 of katG in one isolate, meanwhile, the Thr271 → Ala (ACT → GCT) substitution was detected in another isolate.

These results have not been previously reported. We detected two strains with a high level of resistance to INH (MIC > 4 µg/mL). Therefore, their possible participation in the process of resistance to INH needs to be further explored. Mutations in the inhA regulatory region were observed in five (5.4%) INH-resistant isolates, which was lower than the result recorded in Kazakhstan (20). We only detected a single mutation at codon 3 in one (1.1%) isolate, codon 21 in three (3.3%) isolates, and codon 94 in one (1.1%) isolate and their amino acid substitutions were synonymous mutation (GGA → GGC), Ile21 → Thr (ATC → ACC), and Ser94 → Ala (TCG → GCG), respectively. It is worth noting that we did not detect the common frequent mutation (C-15T) in the inhA gene while this mutation was reported in phenotypically resistant isolates in many countries such as Myanmar, the Kyrgyz Republic, and Ecuador (18, 19, 21). It might be related to regional differences. In our study, no mutation was observed in the ahpC gene, which might be related to the sample size of this study that needs to be expanded for further studies. Only have one (1.1%) isolate mutations in both katG and inhA. This double mutation also occurred with lower frequency in our study that in studies from the Kyrgyz Republic and Kazakhstan (19, 20).

In conclusion, our results further enhance our understanding of the molecular mechanisms involved in INH resistance. By detecting frequent mutation sites in the katG and inhA genes and discovering new mutation sites, we provided a basis for further study of the mechanism of INH resistance and rapid detection of DR-Tuberculosis.