The Study of IFNL3 Gene Rs12979860 Polymorphism in the Hepatitis C Virus Patients and Healthy Population in Tehran Province, Iran 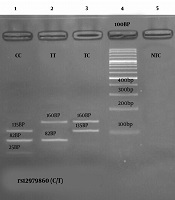 Hepatitis C virus (HCV) infection can lead to a number of disorders and subsequent failures, including chronic liver disease and cancer. Genotype rs12979860 CC is an interleukin 28B gene polymorphism associated with an adequate response to treatment in HCV patients. However, its response quality varies in different races and populations.

The present study aimed to investigate this polymorphism in the Iranian population.

In this study, 120 volunteers were evaluated as patient subjects and 120 volunteers as the control subject group. The collected serum samples were examined by the PCR-RFLP technique and the frequency of polymorphism at rs12979860 was tested in both groups.

Hepatitis C virus (HCV) is an RNA virus from the Flaviviridae family, which currently has contaminated about 3% of the world's population, which is more than 170 million people (1). Infection with this virus stimulates a wide range of acquired responses. The treatment of HCV contains a combination of pegylated interferon alpha (PEG-INF) and ribavirin, leading to a reduction in the variability in viral replication and clinical outcomes. The treatment response is defined as a sustained viral response (SVR), a negative PCR test conducted six months after the end of the treatment. The rate of persistent viral response among individuals infected with genotype 1 of hepatitis C virus is about 40 - 50% after 12 months of treatment (2, 3). In addition to both innate and host-acquired immunity systems which play essential roles in facing with the infection with hepatitis C, other factors such as genotype of the virus, transmission method, and genetic content of individuals contribute to the susceptibility of people to hepatitis C virus. Therefore, many studies have been conducted based on the potential genetic predisposing factors involved in response to the treatment and the natural trend of the hepatitis C virus (4, 5).

Among the genes that play the most crucial role is the Interleukin 28B gene (IFNL3) encoded IFNλ3, which is from type III interferons (6). IL 28B provides an antiviral state and increases the resistance of other cells to viral infection. Also, IL 28B can increase the expression of interferon gamma, MX' gene, 5'2'-oligo-adenylate synthase, and the cytotoxicity of TCD8 + cells. Similar to other type-III interferons, the IL28B signaling pathway is via IL 10R and IL 28R subunits and STAT-JAK pathway. Interferon λ receptors exist on many cells, including the liver and epithelial cells, and play an important role in liver function (7, 8). IFNL3 gene is located on the long arm of human chromosome 19 (9). The most important polymorphisms, known in the IFNL3 gene, are rs-12979860 and rs-8099917 variations (10). They are single-nucleotide polymorphisms located respectively at 3 kb and 8 kb both on the upstream of the IFNL3 gene (11, 12). Studies show that the allele C of the rs-12979860 polymorphism is strongly associated with continuous and consistent response to anti-HCV drug therapy and relationship to spontaneous purification (13, 14).

The optimal genotype (CC) of the rs-12979860 variant increases the probability of a susceptible viral response in comparison with the undesirable genotype (TT) that prevails in Hispanic people two times and in African Americans three times higher than European people.IFNL3 gene polymorphism likely affects the susceptibility of viral response relative to the human race (15). The C allele auto-eliminates the HCV infection, which researchers have referred to as a protective allele. The genome-wide association study (GWAS) has shown that IFNL3 gene polymorphism can be a prognostic factor in response to treatment in patients with hepatitis C virus (16).

The effect of these polymorphisms was different in various races in several studies, so that in African subjects, there was a lower response in comparison to European subjects (17). Besides, various studies showed a relationship between the IFNL3 gene and the rate of virus amplification in the early days of infection with the virus (18). The prevalence of this disease varied in different parts of Iran. In the study which was carried out in Isfahan, TT, CT and CC genotypes were 17%, 41% and 42%, respectively (19). However, this ratio in the studied patients in Yazd showed that the highest level of IL-28 gene genotype in HCV patients was related to CT genotype (55.4%) (20). As well, the prevalence of CC, CT, and TT genotypes in the study in Mazandaran was 41.4, 41.6, and 17.3%, respectively (21).

Due to the high diversity of the IFNL3 gene and the appropriate anti-HCV drug therapy use, we decided to investigate its polymorphism in the HCV patient's population for the first time in Tehran province, Iran.

This case-control study was conducted between 2017 and 2018. One hundred and twenty patients with hepatitis C admitted to the Genetic Diagnostic Laboratory Center were categorized and evaluated in case subjects. Also, we considered 120 people as healthy controls in this study and entered the two groups after obtaining their consent. Patients were - HIV and - hepatitis B virus (HBV). We received their information from their relevant file. Then, we took six cc of blood and serum from every patient and healthy subject and infused them into an anticoagulant tube coated with K2 EDTA (AVAPEZESHK). Next, we conducted the PCR according to the instructions kit to extract the RNA virus from the collected serum via the NucleoSpin® RNA Virus Kit (Macherey-Nagel) and verify the positive or negative HCV. After that, we performed the HCV genotyping test to determine the genotypes for HCV PCR+ patients.

We extracted the genomic DNA from the Genomic DNA Miniprep Kit (Cat. No: BS88503) according to its current instructions. Then, we kept the samples in the freezer.

Primary denature for 5 minutes at 94°C followed by 38 cycles of incubation for 30 seconds at 94°C. Connecting the primer to the genome for 30 seconds at 66°C and expanding for 20 seconds at the temperature of 72°C and final expansion for 15 minutes at 72°C. After completion of the PCR, its products were electrophoresed on a 1% agarose gel for 20 minutes. Subsequently, the 242-bp band was observed on the gel. Then, the products were digested into smaller pieces to determine the genotype of rs1297986 polymorphisms in the IFNL3 gene by the BstUI restriction enzyme. The enzymatic reaction mixture contained 1 μL of buffer and 1 μL of the enzyme added to the PCR product. The samples were then placed at 37°C for 48 hours and finally electrophoresed on a 3% agarose gel for 20 minutes at 90 volts.

Table 1. Characterization of Primers Used to Determine the Sequence of rs12979860 Polymorphism Genotypes in the IFNL3 Gene

Data were collected from patients and statistical analysis was performed via SPSS version 17. ANOVA test was used for analyzing the differences between 3 genotypes and the significance level was statistically significant (P < 0.05).

The frequency of CT in healthy men was 39.8% and 43.6% in male patients with a statistically-significant difference in the results (P = 0.0166). In conclusion, the frequency of C and T alleles in patients was 132 and 108 (55% and 45%), respectively, whereas, this rate was 160 and 80 (66.6% and 33.4%) in healthy subjects for C and T. In general, the risk of developing a virus in the CC population was shown to be 2,000 times lower than that of other people who are TT and TC, which is significant (Table 2). In addition, the risk of developing the HCV virus in a TT genotype person is 0.671 times higher than people with CC and TC. Moreover, the risk of developing the virus in people with CT genotype is 0.646 times higher than those with CC and TT.

Table 2. The Risk of Developing the Virus in CC Patients Compared to Other People Who Have TT and TC.

Table 3. Frequency of Polymorphism Genotypes rs12979860 in the IL-28B Gene in the Group of Healthy and Infected HCV Figure 2. The relationship between IL 28B SNP and levels of viral load and type of HCV genotype

Hepatitis C is one of the main causes of liver disease (22) with a small global prevalence. However, only a small number of infected people automatically clear themselves of the virus, and about 70 to 80 percent of patients become chronic carriers, which may lead to cirrhosis and Hepatocellular carcinogenesis. Also, in hepatitis C, the patient's response to the treatment is different, and its treatment is difficult to tolerate (23). In the treatment of hepatitis C, various factors can be helpful, including the type of treatment, drugs, and effective factors in treating antiviral containing the viral and host factors (24). Moreover, the role of the IL 28B gene in SVR of hepatitis C disease is notable (25).

IL 28B polymorphism is more potent; it can predict the response to treatment better than other pre-emerging predictor factors, such as racial background, initial viral load, liver fibrosis, fasting glucose, and BMI, in Hepatitis C patients (26). Previous findings have also shown that rs12979860 SNP genotype in IL 28B gene plays a determining role in response to treatment (27). Also, only 20 - 30% of the contaminated cases show clinical symptoms (28, 29). Whereas, 70 - 80% of infected cases develop chronic infections, and 30% of those with chronic infection develop chronic liver disease, including progressive fibrosis, resulting in cirrhosis and hepatocellular carcinoma (12).

Understanding the importance of this genotype and its role in the SVR of hepatitis C patients can help determine the extent to which it can be cured in the population. The prevalence of this disease varies in different regions of Iran, with different results reported in the previous study. In the Isfahan study, TT, CT, and CC genotypes were 17%, 41%, and 42%, respectively (30). On the other hand, the study in Yazd showed that the highest IL-28 gene level in HCV patients was related to CT genotype (55.4%) (20). Also, the prevalence of CC, CT, and TT genotypes in another study in Mazandaran was 41.4%, 41.6%, and 17.3%, respectively (21). Despite the difference in the frequency of genotypes examined by IL 28B SNP rs12979860, the optimal C allele is more prevalent in different populations. The results of our study showed that the CC genotype had a lower proportion in HCV patients of both genders than in the control group.

On the other hand, the optimal C allele in healthy subjects was 66.6% and less frequent in patients (55%). According to the previous studies, CC genotype can increase the resistance to HCV treatment in patients (31, 32), which is confirmed by the result of the present study (P = 0.009). The findings from different populations indicate the specific role of this genotype in HCV patients. One of these studies was performed in a population of HCV patients in Turkey, where it was found that the CC genotype in the control group was higher than in the patient group, and the difference between CC and TT genotypes’ frequency was significant (P = 0.016) (33).

Therefore, studies in different populations address the importance of the CC allele in a desirable and effective response to treatment in HCV patients (20, 21, 30, 34). Based on the epidemiologic studies, the prevalence of this allele is greater in the population of East Asian people, so they are probably more resistant to HCV. On the other hand, after East Asia, it has been mostly observed in South Asia, Europe, and Africa, respectively (12). Although individuals with CC genotype are more likely to be treated with PEG-IFN and RBV, race can affect the treatment results, and the rate of SVR in individuals with a CC genotype varies by race (35), though other factors that could affect the amount of SVR are not explicitly explained.

Given the importance of the desirable CC genotype in healthy individuals and patients, it can be suggested that detecting the rs12979860 polymorphism genotype of IL 28 gene can help determine the treatment process for HCV patients. However, a multi-dimensional and accurate evaluation is also required to design and conduct more extensive studies in larger scales through other regions of Iran to confer a more comprehensive report.