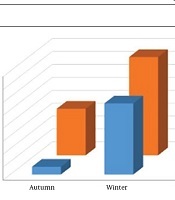 This study was conducted to assess the causative agents of viral ARI among hospitalized adults by real-time PCR.

The role of other viruses such as human adenoviruses rhinovirus/enterovirus (RV/EV), human bocavirus (HBoV), and human parechovirus (HpeV) was not investigated. Multiplex PCR can be used as a rapid test for the diagnosis of viruses causing acute respiratory infection, which results in decreased length of hospitalization.

Human respiratory syncytial virus (HRSV) types A and B belong to genus Orthopneumovirus and family Pneumoviridae (2). The human respiratory syncytial virus is responsible for bronchiolitis and pneumonia in infants and young children (6, 7). Human respiratory syncytial virus group A is subdivided into 11 genotypes such as GA1-GA7, ON1, SAA1, NA1, and NA and HRSV group B is categorized into genotypes GB1-GB4, SAB1-SAB3, SAB4, URU1, URU2, BA1-BA12, and THB (8, 9). Human parainfluenza virus (HPIV) 1-4 are belong to family Paramyxoviridae HPIV-1 and HPIV-3 belong to genus Respirovirus, and HPIV-2 and HPIV-4 to genus Rubulavirus (10). Human parainfluenza viruses are considered common causes of acute upper and lower respiratory infections among children and adult populations worldwide (11). Parainfluenza viruses (HPIVs) are associated with clinical illnesses such as otitis media, pharyngitis, conjunctivitis, croup, tracheobronchitis, and pneumonia based on genetic and antigenic variations (polymerase, matrix, and nucleoprotein). Human parainfluenza viruses are classified into four types HPIV-1 to HPIV-4, among which HPIV-4 is regarded as less important (11).

There are four types of influenza viruses A, B, C, and D. Human influenza A (H1N1, H3N2) and B viruses can cause seasonal epidemics of diseases including ARI among all age-groups in different regions of the world (12, 13). Four types of HCoVs (HCoV-229E, HCoV-OC43, HCoV-NL63, and HCoV-HKU1) have been associated with a wide range of respiratory illnesses, including the common cold, pneumonia, and bronchiolitis (14). Concerning clinical manifestations of ARI, it is difficult to distinguish between RSV, HMPV, influenza virus (A, B), HPIVs (1-4) and HCoVs (OC43/HKU1, NL63, 229E) infections. Therefore, the primary diagnosis is important to ease the early management and control of ARIs (15).

The samples for this cross-sectional study included throat swabs received from hospitals of Ahvaz city, Iran, from September 2015 to December 2016. The target population comprised adults above 40 years of age who referred to the hospitals with clinical ARI. Most patients had symptoms, including congestion, runny nose, coughs, sore throat, body aches, fatigue, fevers over 39°C, chills, difficulty in breathing, dizziness, loss of consciousness, bronchitis, pneumonia, and bronchiolitis. Throat swabs were obtained from patients, put in viral transport medium with ice packs, and transferred to a Virology Department. They were kept at -80°C before RNA extraction.

Based on TaqMan technology, real-time PCR was used to detect viruses associated with ARI. Table 1 shows primers and probes used for different viral respiratory infections including influenza A (IfA) H1N1 and H3N2 and influenza B (IfB) viruses, parainfluenza viruses (HPIV-1, HPIV-2, HPIV-3, and HPIV-4), respiratory syncytial viruses (RSVs) A and B, human coronavirus HCoVs (OC43/HKU1, NL63, 229E), and human metapneumoviruses A and B. The PCR reaction mixture contained 2X reaction buffer, 10 µM of each of forward and reverse primers, 2 µL of cDNA template, and D/W water up to 20 µL. All the samples including positive and negative controls were subjected to ABI one-step thermal cycling with the following conditions: initial denaturation at 95°C for 5 minutes, followed by 40 cycles of 95°C for 30 seconds and annealing at 60°C for 20 seconds.

The data were analyzed using SPSS version 21.0 (SPSS Inc., Chicago, IL, USA). The chi-square test was used for the analysis of categorical variables including gender, distribution of viral infections among genders and different age groups. P values of ≤ 0.05 were considered statistically significant.

The chart showing a high frequency of viral respiratory infections observed in winter (49.1%), followed by autumn (5.35%); no sample was observed in spring and summer (P = 0.000).

In Iran, the circulation of Adenovirus (AdV) has been reported in patients with ARI. Pourakbari et al. reported that the frequency of AdV was 3.4% in patients with ARI in Tehran (24). Tabasi et al. described that the rate of the Human Boca virus was 10.7% in children with ARI in Tehran (25). In our study, HCoVs (OC43/HKU1, NL63, 229E) were not detected in ARI patients. Mehdi et al. reported that 5.5% of ARI patients were positive for Coronavirus E229 in Tehran (26). In our study, two (1.78%) patients had two mixed viral infections, RSVA/MPVA and RSVA/PIV3. Many researchers have described the co-infection of viruses causing respiratory tract infections. Yoshida et al. in Japan detected the co-infection of human rhinovirus, human metapneumovirus, and parainfluenza virus-3 in patients with ARI (27). Petrarca et al. in Italy reported the co-infection of HRSV and HRV in patients with lower respiratory tract infection (28). The distribution of viruses causing ARI were 30 (26.78%) in males and 31 (27.67%) in females (P = 0.862).

The influenza vaccination is not mandatory in Iran although high-risk groups need to receive the vaccine. In this experiment, the outbreaks of respiratory virus infections were observed in autumn and winter, which are consistent with other reports (29, 30). No virus causing respiratory infection was detected in spring and summer seasons in this region of Iran. This might be due to that the temperature exceeds 40°C in the spring and remains constant above 48°C during summer. Ribavirin and oseltamivir antiviral therapy can reduce the progression of URI to LRI and mortality rate due to RSV and influenza virus infections (31). Currently, no specific antiviral therapy is available against human rhinoviruses, human coronaviruses, human metapneumovirus, and human bocavirus. Therefore, new treatment and preventive options are required. Sensitive molecular methods like multiplex real-time PCR in clinical practice can help the rapid diagnosis of viruses causing respiratory infection and reduce improper antibiotic therapy (32). Overall, several investigations have described that multiplex real-time PCR as a non-invasive method is faster and more sensitive than other standard methods such as serology and culture (33, 34).

In conclusion, in this study, RSVA (n = 28, 25%) and MPVA (n = 18, 16.07%) were the most common causes of RI in adults. Considering the low diagnostic cost of clinical presentation and laboratory findings in ARI, multiplex real-time PCR as a rapid diagnostic test can be considered efficient in reducing the length of patients’ stay in hospitals. The results indicated that 49 (43.75%) patients were negative for RSVA, RSVB, Influenza A2, Influenza B, HPIV2, HPIV4, HCoVs (OC43/HKU1, NL63, 229E); however, it requires further investigation to disclose the role of human adenoviruses rhinovirus/enterovirus (RV/EV), human bocavirus (HBoV), and human parechovirus (HpeV).

Copyright © 2019, Author(s). This is an open-access article distributed under the terms of the Creative Commons Attribution-NonCommercial 4.0 International License (http://creativecommons.org/licenses/by-nc/4.0/) which permits copy and redistribute the material just in noncommercial usages, provided the original work is properly cited.
download pdf 183.13 KB Get Permission (article level) Import into EndNote Import into BibTex
Number of Comments: 0