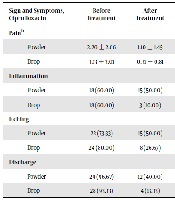 The purpose of this study was to compare the therapeutic effects of ciprofloxacin drops and powder in chronic bacterial middle ear infections.

Of the 125 patients, 60 (48%) had bacterial infection. There were 30 patients in the control and the case groups equally. Ear manipulation results showed that only 16.67% of the subjects had ear manipulation in the drop group, while that was 43.33% in the powder group. The frequency of itching, swelling and discharge was not significantly different between the two groups before the treatment, but this difference was significant after the treatment, especially in pain, swelling, and discharge. Overall, Pseudomonas aeruginosa, Enterobacteriaceae spp. and Staphylococcus epidermidis were the most common bacteria grown in culture.

Middle ear infections occurring in people for a variety of reasons are not developed by a sporadic cause, but are the end result of several factors including immunological and anatomical disorders or microorganisms, especially bacteria and sometimes other conditions (1). Inflammation usually remains confined to the mucosa but can cause chronically ossicular destruction over time in some patients (2, 3). In these cases, there is a suspicion of tuberculous otitis media (TOM) and middle ear cancer (4). Although there is no agreed definition for chronic otitis media, most otologists still accept conditions, including eardrum rupture, and purulent mucosal discharge from the middle ear for at least three weeks (5).

Although Staphylococcus species are abundant in these secretions, Pseudomonas aeruginosa is typically the most common gram-negative organism, and Enterobacteriaceae species are also common. The existence of anaerobic organisms and fungi or both as pathogens is controversial. The pathophysiological contribution of anaerobic organisms is unclear (5). The disease is diagnosed by observing symptoms on otoscopic examination and eardrum rupture. In recurrent and chronic infections, cultures should be used to set antibiotics. Topical antibiotics can also be applied in powder form by spraying. Various antibiotics are administered alone or in combination, including boric acid, sulfamethoxazole, chloramphenicol, amphotericin and hydrocortisone.

Systemic antibiotics should be used in resistant cases and the presence of specific pathogens in the culture sample. Several quinolones such as ciprofloxacin, ofloxacin, and norfloxacin may be useful in these patients (6). Ciprofloxacin is a quinolone drug that is widely used in the treatment of middle ear infections due to its potent therapeutic outcome (7, 8). Quinolones inhibit bacterial DNA synthesis (9). In the treatment of otitis, ciprofloxacin drops are usually given topically three times daily for two weeks (10). It has been shown that topical administration of ciprofloxacin drops does not cause 0.3% sensorineural hearing loss (7).

The research units were selected by the convenience sampling method. A total of 125 patients suspected of having a chronic bacterial infection of the middle ear were evaluated. Of these, 60 patients with a definitive diagnosis of chronic bacterial middle ear infection were enrolled based on clinical and laboratory results. Fungal growth or co-infection caused these individuals to be excluded from the study. All patients' ears were treated with suction clearance, and then they were randomly divided into two groups. The first group (n = 30) as a control group was treated by ciprofloxacin drops in the tympanic cavity, three times daily and three drops each. The other group (n = 30) was treated by 50 mg of ciprofloxacin powder, only once by a specialist with a sprayer. The powder in the sprayer and guided by a microscope through the canal and re-perforation was poured into the tympanic cavity only once by an ENT specialist, to cover the entire area. The groups were adjusted according to the types of bacteria (P = 0.977).

The ENT specialist collected the pus samples after completing the related form. After sampling, a smear was prepared immediately on the slide and stained with the gram staining method to investigate the presence of microorganisms. A part of the sample was cultured in bacterial medium, including blood agar (Merck, Germany) and chocolate agar (Merck, Germany) and stored at 37°C with 5% CO2. Sabouraud dextrose agar (HiMedia, India) with chloramphenicol (Merck, Germany) was also used to rule out fungal infection. The bacterial infection would be detected if the result was negative for fungal culture and positive for direct slide. Common bacteriological methods were used to identify bacterial strains.

All patients were evaluated after two weeks for improvement of clinical symptoms (pain, swelling, discharge, and hearing loss), disease symptoms in the ear examination and insertion into the questionnaire based on relevant scales. The pain intensity was determined on the basis of visual analogue scale (VAS) ranging from zero to ten. In this study, the clinical specialist (specialist physician) was blind to the group allocation. Another project colleague performed the second stage examinations. Moreover, the clinical specialist was blind to the laboratory results as well as the laboratory expert was blind to the clinical results. Both drugs used in the ear had the least side effects due to topical application.

Results of ear manipulation considered as a variable showed that only 16.67% of the subjects (n = 5) in the drop group had ear manipulation, while this rate was 43.33% for the case group (powder). Chi-square test indicated that this difference was significant (P = 0.024). Although unusual for manipulation (except for ear cleaner and match), it was the highest in each group, no significant difference was observed between the two groups (P = 0.092). Most (88.33%) reported no swimming in the pool, river, or sea. The frequency of itching, swelling and discharge was not significantly different between the two groups before treatment, but this difference was significant after treatment, especially in pain, swelling and discharge (Table 1). Right ear involvement was slightly higher (51.67%) than left ear. Overall, P. aeruginosa, Enterobacteriaceae spp. and Staphylococcus epidermidis were the most common bacteria grown in culture (Table 2).

Table 1. Sign and Symptoms Before and After the Treatment by Ciprofloxacina

The results of this study are in line with previous studies. Loock in South Africa compared the therapeutic effects of boric acid powder, acetic acid 1% and ciprofloxacin drops in the treatment of active chronic otitis media and found that ciprofloxacin and boric acid powder were significantly more effective in inactivation of chronic otitis media compared with 1% acetic acid (7). The present study for the first time used ciprofloxacin powder compared to ciprofloxacin drops, and this was one of the strengths of this study. Another strength was the culture method to confirm bacterial infection.

The results of different studies showed that various bacteria are effective in causing middle ear infection. In a study of Mofatteh et al. on the determination of bacterial causes of chronic otitis media, the most common pathogens were strains of Staphylococcus, Klebsiella and P. aeruginosa (13). In a study by Ilechukwu et al. in Nigeria, the most common bacteria in chronic otitis media were S. aureus and Proteus spp (14). Elmanama et al. in the Gaza Strip investigated the bacterial causes of the middle ear and reported that the most common bacteria isolated from culture were P. aeruginosa and S. aureus (15). These bacteria were also present in a study of Khajavi et al. on 50 patients referred to Hakim Loghman Hospital (16). In our study, the most common bacteria isolated were P. aeruginosa, Enterobacteriaceae spp. and S. epidermidis, consistent with most studies. The differences between the present study and some others on a number of variables may be due to economic and cultural differences.

The authors of the article would like to sincerely thank Dr. Hosein Najafafzadeh Darzi for pharmaceutical advice, and also Miss Aynaz Khademian for laboratory cooperation. We also thank the Deputy of Research and Technology of Babol University of Medical Sciences for financial and administrative support as well as the Clinical Research Development Center of Babol Ayatollah Rouhani Hospital for their unwavering assistance in this regard.