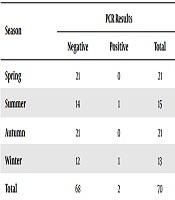 Limited information about HEV-related aseptic meningitis is available in Isfahan/Iran. Therefore, this study was designed to evaluate HEV-related meningitis in this city.

In this cross-sectional study, 70 patients with the diagnosis of aseptic meningitis were enrolled and divided into 2 groups, including children and adults, in 2 centers of Alzahra and Imam Hossein hospitals from December 2016 to December 2017. Diagnosis of meningitis was made on clinical symptoms and lumbar puncture samples. The RNA of HEV was extracted with Roch extraction Kit and enteroviral infection was detected by real-time PCR test. Chi-square and descriptive statistics were used for data analysis.

Enteroviruses were detected in 2 cases out of 70 patients (2.8%). Two cases were in the children group (9.5%). The relationship between gender and prevalence was not significant. Two cases were found in summer and winter.

We found that the positive test results of enterovirus in lumbar puncture (LP) samples were significant in the children patients (9.5%, P value = 0.026) but the positive test results in adult patients were zero. So it makes sense to do PCR tests in children with signs or symptoms of meningitis. A well-designed study with more samples is recommended for better evaluation of HEV-related infections, especially aseptic meningitis in Iran. These types of studies help to find a good strategy for the management of HEV infections in Iran and, thereby reducing hospitalization and overuse of antibiotics.

Enteroviral infections, both endemic and epidemic forms, are known as worldwide viral infections in patients affecting all age groups. This group of viruses causes a wide range of clinical syndromes such as respiratory and gastrointestinal infections, poliomyelitis, mono-neuritis, and poly-neuritis (1). This virus is known as a common cause of central nervous system (CNS) infection such as encephalitis and aseptic meningitis (2-4). Enteroviral meningitis is usually benign but sometimes it may be accompanied by death or severe sequels such as epilepsy, encephalitis, and neonatal sepsis (5). Life-threatening infections may appear in certain patients on which therapeutic drugs have limited effects. Additionally, antibody-deficient patients may develop chronic CNS infections, often with lethal outcomes (6). In a similar study in Iran, enterovirus serotype of EV71 was the major cause of the disease, especially in very young children (7). However, pleconaril, pocapavir, and vapendavir are three antiviral agents, which are being clinically evaluated for enteroviral infections (8, 9).

On the other hand, the clinical features and cerebrospinal fluid (CSF) analysis of the patients with enteroviral CNS infections may be similar to those of bacterial or herpetic infections, resulting in wrong diagnosis, prolonged hospital stay, and unnecessary empiric antibiotic prescription until the definitive diagnosis is made (8, 10, 11). A specific virological diagnosis of enteroviral meningitis depends on the isolation of virus from the CSF in tissue culture (3, 12). But this test is expensive and not available every time and everywhere. However, CSF PCR is rapid and more sensitive than isolation of virus for the diagnosis (13). PCR is the most promising alternations to viral culture for the diagnosis of Enteroviral meningitis (12).

Knowledge about the common viral causes of aseptic meningitis regarding the demographic and epidemiologic features of the patients may help make a better decision on them. Therefore, regional studies for evaluating the frequency of the viral causes in every region may be helpful. This study was designed for evaluation the frequency of enterovirus infections in patients with a diagnosis of aseptic meningitis in Isfahan, a city in the Center of Iran.

This cross-sectional prospective study was conducted in 2 university hospitals (Alzahra and Imam Hossein) in Isfahan from December 2016 to December 2017. Emam Hosein Hospital is for children and Alzahra Center for adult patient’s admission. Therefore, the patients in this study were divided into two groups, including children and adults. All the patients with a diagnosis of acute meningitis who had written consent for lumbar puncture (LP) were enrolled in the study. The patients visited and diagnosed by a specialist (pediatrics and/or infectious disease specialist) and informed consent forms were filled and signed by patients and/or their parents (in children cases) before the enrollment in the study.

Diagnosis of meningitis was made on clinical symptoms and laboratory results. Clinical symptoms and signs were: neurological symptoms (positive neck rigidity, positive Kernig and Brudzinsky signs), fever, vomiting, and headache. Each patient with a clinical diagnosis of meningitis was selected for lumbar puncture and CSF analysis. After that, on the basis of inclusion and exclusion criteria, the suitable CSF samples were selected. Inclusion criteria were: Normal CSF glucose level, normal or high normal CSF protein level, and WBC count < 300/mm3, lymphocyte dominant (12). Exclusion criteria were: positive CSF bacterial culture, positive CSF Gram stain smear, any patient who had not signed the informed consent form (12).

For this purpose, at the time of lumbar puncture two samples with the same code were sent to the laboratory. One of the samples was transported on ice to the Virology Department of the Infectious Diseases and Tropical Medicine Center in Isfahan University of Medical Sciences/Iran. The specimens were stored at -80°C for further steps of study in that center. The other one was tested for Gram stain, culture, and further analyses. All of the samples with negative bacterial Gram stain and/or culture were assigned as aseptic sample. In the next stage, aseptic samples were evaluated for enteroviral RNA extraction. At last 70 eligible persons were entered into this study (21 children and 49 adults).

Viral RNA extraction virus was detected by real-time PCR, using CORBET 6600 system. The primers used for DNA amplification were “5’-ATTGTCACCATAAGCA-3’ as primer 1 and “5'-CCCTGATGCGGCTAATCC-3’ ” as primer 2 and “5’fam-AACCGACTACTTTGGGTGTCGGTGTTTC-BQ-1-3’ ” as the probe. Enterovirus RNA was detected by 2-steps RT-PCR Kit. This test cannot be used for differentiation of enterovirus subtypes. In brief, 5 µg total CSFRNA with primer mixture (0.2 µg of Random hexamer (≠50142) and top up 12.5 µL of water) were incubated at 65°C for 5 min and chilled on ice.

The cDNA synthesis mixture was prepared in the following order: 4 µL of 5× reaction buffer, 0.5 µL of Thermo Scientific Ribolock RNase inhibitor, 2 µL dNTP Mix 10 mM each, 1 µL (200 U) RevertAid reverse transcriptase, up to 20 µL, was mixed gently and centrifuged, incubated 10 min at 25°C followed by 60 min at 42°C and the reaction was terminated by heating at 70°C for 10 min, then 2 µL of the reaction was mixed to perform PCR in 50 µL volume. All of the stages of the study were approved by the Ethics Committee of Isfahan University of Medical Sciences (the study code was 395692). In the end, data were analyzed using SPSS version 22. Chi-square method was used for evaluation of the frequency of the results of CSF PCR between children and adult groups and descriptive statistics were used for data descriptions.

Table 1. Frequency of CSF PCR Results Based on Age Groupsa

Although the frequency of aseptic meningitis was more in the spring and autumn (12), the cases with enteroviruses were frequent in the summer and winter in the current study (Table 2).

Table 2. Frequency of CSF PCR Results Based on Different Seasonsa

aThe relationship between gender and prevalence was not significant.

In this study, 2.8% of the evaluated patients with aseptic meningitis were positive in terms of enteroviral PCR. This frequency was higher in the children group than in the adult group (9.5% versus zero, respectively). In scientific textbooks, it has been mentioned that infant and young children are the primary victims of enterovirus-related meningitis because they are the most susceptible hosts (12). In a similar study in Ahvaz, southwest of Iran, the prevalence of. enterovirus was considerably high (59.6%) (14). In a study that was conducted on children less than 8 years old in Iran, the frequency of positive CSF PCR has been reported 32.2% for HEV (15). In contrast to our study, the mean age of the cases in these studies has been mainly less than the 8 years. Another study in children medical center in Tehran showed the “enterovirus detection rate” was 10.16% in all 118 CSFs and most patients were 0 - 2 years old (40.67%) (16).

In a similar study conducted in China, enteroviruses have been detected in 19.2% of the patients. In that study, 437 hospitalized patients were identified with a diagnosis of aseptic meningitis (17) and the age of the cases ranged from 4 months to 12 years and most (83.8%) of them were < 5 years. Whereas in our study, 30% of the patients are in the children group who were < 7 years old. However, in our study, the frequency of HEV PCR in CSF of the patients with aseptic meningitis is very low in comparison to other studies such as those in Brazil (55.1%), India (22.1%), and France (58.4%) (5, 17). Kupila et al. (3) established a higher sensitivity of CSF PCR during the first days of enteroviral meningitis. They showed that CSF samples obtained during the first 2 days of illness had more chance of positivity for PCR, than the samples that were obtained later than 2 days after the onset of the disease (3).

On the other hand, we have a cultural problem in Iran. There is a pessimistic attitude toward lumbar puncture procedure, especially in children. This negative attitude is the most important cause for prohibition and delayed lumbar puncture in patients with a diagnosis of meningitis. Therefore, delayed lumbar puncture in some patients may be an important reason for lower frequency of CSF PCR positivity in our study. In the present study, 70% of the patients with aseptic meningitis were in the adult group, whereas none of them was positive for CSF PCR of HEV. This result is inconsistent with the results of other studies in which the frequency of HEV infection is estimated at about 17% (10). In fact, it is difficult to make a clinical diagnosis in adults, because some of the signs and symptoms are misleading. In addition, there are many other causes of aseptic meningitis, which were not evaluated in our study.

In some countries such as the USA, there is a national surveillance system for enterovirus infections, which provides valuable information about seasonal patterns of enteroviral infections and is used for investigations and health strategies (18), whereas similar HEV surveillance is very limited in Iran. This study is the first effort to evaluate the enteroviruses as the cause of aseptic meningitis in Isfahan. However, since this is the first study for HEV-related meningitis in our city, we could not obtain previous information on aseptic meningitis caused by enteroviruses. We recommend further long-term surveillance for understanding the molecular epidemiology of HEV-related meningitis.

Seasonality is one of the main characteristics of Enteroviral infections, especially in temperate zones (4). In some studies, it is believed that infection is more common during summer (4) but in other studies, it is believed that outbreaks will occur in cold months of the year (10, 11). In our study, one of the cases occurred in summer, while the other in the winter. We recommend a well-designed study to evaluate the seasonality of infections in Iran. This association may help us for adopting a better approach for patients with signs and symptoms of meningitis in different seasons.