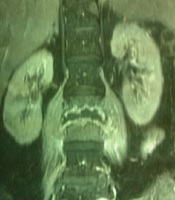 A 68-year-old woman referred to our hospital with a 2-month history of intermittent fever, weight loss, and low back pain. On physical examination, we found obvious bulging with the dimensions of 4 × 20 cm on about L1 - L4 vertebral area. Lumbosacral MRI revealed the evidence of L2 - L3 spondylodiscitis. She had positive blood and urine cultures with ciprofloxacin-sensitive E. coli and successfully treated without surgery after 8 weeks. Nine articles (including 9 patients) regarding E. coli spondylodiscitis or vertebral osteomyelitis have been published from the 1st of January 1985 to the 10th of August 2019. In addition to these cases, here we report 10th case of E. coli vertebral osteomyelitis. Four patients were female and 6 were male. The mean age was 52 years with a range of 12 - 69. Seven cases had a history of fever, and overall, fever and pain at the site of vertebral involvement were the most common symptoms.

In our reported patient, returning to the patient’s medical history and finding a previous urinary tract infection and E. coli bacteremia was crucial in helping to diagnose and treat the patient. In our review, 7 patients had positive blood cultures, a finding that emphasizes the diagnostic value of this test. Escherichia coli spondylodiscitis is a relatively rare disease that has usually a source of urinary tract infection and its clinical signs and symptoms are not distinguishable from vertebral osteomyelitis due to other agents and finally, blood culture can be helpful as a diagnostic method.

Native vertebral osteomyelitis is an infectious inflammatory disease with the involvement of an intervertebral disk and adjacent vertebral bodies. The incidence rate of this infection is estimated at 0.4 - 2.4 cases per 100,000 population that increases with age (1-3). However, the prevalence of this infection has increased in recent years and the main reasons for this rising include the increment in spinal surgery, bacteremia caused by hospital manipulations, the growing number of injected drug users, increasing number of immunocompromised patients, the high accuracy of MRI imaging compared to older diagnostic methods, and aging society (1). Discitis is more common in men than women and has two age peaks, the first at the age of seven and the next at the age of 50 (4).

Osteomyelitis of the spine usually presents with the vertebral body infection, and discitis usually is identified by intervertebral disc involvement in the adjacent vertebral infections (3). Spinal radiography may be usually normal in the early stages of spondylodiscitis (4). This infection is usually formed by the spread of hematogenous microorganism from distant anatomical infected regions and the formation of an infectious nidosis on the avascular vertebral disc (4, 5). The most common causative agent of vertebral osteomyelitis is staphylococcus aureus (3, 6). In most cases, timely diagnosis, appropriate antibiotic therapy, and complete treatment period are associated with better prognosis (1). In this report, a case of spondylodiscitis due to Escherichia coli infection has been described and also a review of literature has been performed on this entity.

A 68-year-old woman referred to our hospital with a 2-month history of intermittent fever, weight loss and low back pain. Her fever had no pattern and her low back pain was progressive. She had no history complaint of productive cough, nausea, vomiting, and diarrhea. She had a history of the following diseases: Diabetes mellitus (since 20 years ago), Ischemic heart disease (since 3 years ago), renal stone (since youth age), hypertension (since 12 years ago), and chronic kidney disease (since 2 years ago). The patient had no history of smoking or alcohol abuse but she had consumed unpasteurized local dairy products and also described a suspicious close contact with a tuberculosis patient in her childhood. The mother and one of her sisters were diabetic, and their father was suffering from hypertension. Her medical history included Metformin (500 mg/twice a day), Glibenclamide (twice a day), Methoral (25 mg/twice a day), and Naproxen (500 mg/twice a day).

On physical examination, we found obvious bulging with the dimensions of 4 × 20 cm (Figure 1) on about L1 - L4 lumbar vertebrae accompanied by prominent point tenderness. Her body temperature was 38ºC. Lumbosacral MRI was performed and evidence of L2 - L3 intervertebral disk destruction and vertebral body were found in favor of spondylodiscitis (Figure 2). There were anemia, leukocytosis, elevated ESR, and CRP and also a positive tuberculin skin test (16 mm) in the laboratory tests, but her blood cultures and Brucellosis serologic tests were negative (Table 1). Her chest X-ray was normal. The patient underwent image-guided aspiration biopsy and histopathological and microbiological evaluations of the specimens revealed acute to chronic inflammation and negative results of bacterial culture, MTB-PCR and Brucella-PCR. We tried to carry out the second aspiration biopsy but the patient was not satisfied. We returned again more precisely to the patient’s history and found that she was admitted to another hospital because of lithotripsy about 2 months before admission to our hospital. Her previous admission documents were evaluated and remarked that she had been treated due to pyelonephritis a few days after lithotripsy and had positive blood and urine cultures with ciprofloxacin sensitive E. coli at that time. Based on this worthwhile finding, we administered ciprofloxacin 400 mg IV for 4 weeks then 500 mg PO for 8 weeks and her symptoms were improved. Follow-up ESR and CRP decreased to normal levels after 8 weeks. At the end of the treatment course, sequels due to the destruction of the vertebral bone such as occasional low back pain and kyphosis deformity remained.

Our search was performed for relevant data through the PubMed/MEDLINE and Google scholar. The articles on the subject published from the 1st of January 1985 to the 10th of August 2019 were evaluated. We included all case reports on spondylodiscitis or vertebral osteomyelitis, which were due to E. coli. In addition to vertebral location of the infection, the information about clinical symptoms, underlying diseases, treatment, outcome, probable source, and the presence or absence of bacteremia were extracted and recorded.

Nine articles (included 9 patients) on E. coli spondylodiscitis or vertebral osteomyelitis were published from 1985 to 2019 that met the requirements of the inclusion criteria (Table 1) (7, 8). In addition to these cases, here we report 10th case of E. coli vertebral osteomyelitis. Based on our literature review, this is the first review of E. coli spondylodiscitis. In this review, 4 patients were female and 6 were male. The mean age was 52 with a range of 12 - 69 years. Of 8 patients who their temperature had been mentioned in the reports, 7 cases had a history of fever, and overall, fever and pain at the site of vertebral involvement were the most reported symptoms. The most common source of these infections (at least in 5 patients-55.5%) was urinary tract infection. In terms of the level of spinal involvement, 5 patients showed lumbar spine involvement, 3 patients had thoracic and 2 patients had cervical vertebral involvement. Interestingly, E. coli was isolated from patients’ blood cultures in 7 patients. Moreover, 3 patients underwent surgery, and almost all patients, whether or not undergoing surgery, recovered from the disease (Table 2).

Escherichia coli is the normal flora of gastrointestinal tract in all humans (5, 9). Some types of this microorganism could cause a wide range of gastrointestinal and extra-gastrointestinal infections, most commonly gastroenteritis, urinary tract infections, bacteremia and neonatal meningitis (9). Infections such as skin and soft tissue induced by E. coli rarely occur and usually require a history of immunodeficiency, especially malignancy (10). Escherichia coli also is a rare cause of bone and joint infections in children. Nevertheless, it is the most common Gram-negative bacilli that could cause spondylodiscitis in adults (5). In developing countries, E. coli, Proteus and Mycobacterium tuberculosis are usual causes of spondylodiscitis after Staphylococcus aureus as the most common agent. In patients with a history of intravenous drug abuse, Pseudomonas spp. could be one of the most common microorganisms causing bone and joint infections, especially vertebral bone infections (4).

The main underlying diseases that predispose patients to spondylodiscitis include diabetes mellitus, trauma, and spinal surgery (3). In our investigation, only our case and the patient reported by Fish et al. (3), had a history of diabetes mellitus; however, almost the majority of patients had at least one underlying disease such as cirrhosis, chronic obstructive pulmonary diseases and etcetera. Spondylodiscitis can be an iatrogenic process. In the case reported by Dobson et al., there was a history of transrectal prostate biopsy despite ciprofloxacin prophylaxis. The patient had been involved with quinolone-resistant E. coli spondylodiscitis and epidural abscess (2). In our patient, a history of lithotripsy can also be considered an iatrogenic factor. The most common symptom of this infection is pain (1). Pain usually occurs on the site of the vertebral involvement, which usually progresses gradually, and sometimes continues throughout the night and disrupts the patient’s rest (3). Although fever is more common in children, the presence of back pain and fever should make it possible for clinicians to diagnose vertebral osteomyelitis (4). Also, in this review, the most common symptoms of E. coli spondylodiscitis were fever and pain.

Diagnostic measures in patients with suspected vertebral infections include a complete history taking, careful physical examination, laboratory procedures, and imaging studies (3). In our reported patient, returning to the patient’s medical history and finding a previous urinary tract infection and E. coli bacteremia were crucial to the treatment of the patient. Blood cultures can be very helpful in the diagnosis of vertebral osteomyelitis as the main lab test (2). In our study, 7 patients had positive blood cultures, emphasizing the diagnostic value of this test. Our patient is similar to most previous patients in some items such as chief complaint, underlying disease and similar to Del Pozo et al. (1) case at the level of involvement, but our patient blood culture is negative, unlike most cases.

Escherichia coli spondylodiscitis is a relatively rare disease that has usually a source of urinary tract infection and its clinical signs and symptoms are not distinguishable from vertebral osteomyelitis due to other agents. Furthermore, blood culture can be helpful as a diagnostic method.