The Complications of Aspergillus fumigatus Sensitization in Patients with Asthma 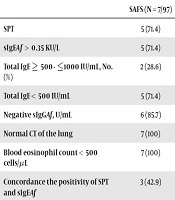 In the present study, we aimed to evaluate the prevalence of SAFS and AAFS in Iranian patients with asthma.

Two hundred consecutive outpatients aged ≥ 18 years with moderate to severe allergic asthma, referred to a pulmonary subspecialty hospital (Tehran, Iran) for 25 months, were included in the study. Skin prick test (SPT), total IgE (tIgE), and specific IgE (sIgEAf) and IgG against Aspergillus fumigatus (sIgGAf) were determined for all subjects. Comprehensive criteria were applied for the diagnosis of SAFS and AAFS.

According to the findings, the prevalence of SAFS and AAFS in Iranian patients with severe and moderate allergic asthma was lower than the previously published global data. This low-prevalence reported rate may be due to the fact that we applied strict criteria in the present study.

Asthma, as a global public health problem, is a complex inflammatory and heterogeneous disease with chronic inflammation in airways and significant morbidity and mortality (1). It is estimated that 1% to 18% of the general population in different countries suffer from asthma (1). Exposure to animal dander, house dust mite, and airborne fungal spores, like environmental factors, results in the stimulation of host immune responses and subsequently triggers asthma (2). In severe manifestations of asthma, fungal exposure, and sensitivity to fungal allergens can also lead to asthma exacerbation (3). There are several reports on the distribution of fungal allergy in various studies (4, 5). The prevalence of fungal sensitization was reported as 5 - 70% in the north and 5 - 65% in central and south of Iran (5).

Proper characterization of fungal sensitization in patients with severe asthma is critical to the appropriate management of patients with ABPA or SAFS (10). The diagnosis of SAFS, as a new classification of patients with allergic asthma, is increasing (9). It is estimated that about 33% (25 - 50%) of subjects with severe asthma have fungal allergies and may be eligible for SAFS if they do not label as ABPA (11). Since fungal allergy makes asthma more severe, so identifying SAFS, a new phenotype of asthma, appears to have important therapeutic implications that could be effective in reducing asthma symptoms (12). Therefore, in the present study, we aimed to evaluate the burden of Aspergillus sensitization in Iranian patients with asthma according to comprehensive proposed diagnostic criteria.

In this present study, we aimed to evaluate the prevalence of SAFS and AAFS in Iranian patients with asthma.

In a cross-sectional and prospective study, 200 consecutive patients aged ≥ 18 years with a diagnosis of moderate to severe asthma based on the Global Initiative for Asthma (GINA 2015) (13) guideline referred to Masih Daneshvari Hospital (the reference center for tuberculosis and pulmonary diseases of Iran), Tehran, Iran from January 2016 to February 2018 were included in the study. Patients younger than 18 years, pregnant women, smoking, non-allergic asthma, other widespread lung diseases such as tuberculosis, cystic fibrosis, chronic obstructive pulmonary disease, mild asthma, and malignancy were excluded. We collected data on the demographic profile of all the included participants. Spirometry was performed according to the American Thoracic Society/European Respiratory Society (ATS/ERS) guidelines (14). The included subjects underwent X-Ray or/and computed tomography (CT) scan of the lung.

The total white cell counts and the percentage of eosinophils in peripheral blood were determined by an auto-analyzer (Sysmex XT-1800i, U.S.A). Eosinophil counts of > 500 cells/μL were considered peripheral eosinophilia.

3.5. The Proposed Criteria for the Diagnosis of SAFS

Table 1. Essential Proposed Criteria for the Diagnosis of SAFS and AAFS in Asthmatic Patients (6, 10)a

aAt least one of two criteria (number 2 or 3) should be positive to continue evaluating patients.

IBM SPSS version 18.0 was used for data entry and analysis. The quantitative variables were presented as frequencies and percentages, mean ± standard deviation (± SD), and mean (range) or median (range).

4.2. The Prevalence of SAFS and AASF

Table 2. Paraclinical Parameters in Patients with SAFS and AAFS

Sensitization to Aspergillus, which exacerbates the symptoms of asthma, is most likely to occur in people with severe asthma (15). It has been estimated that the prevalence of SAFS in adult asthma patients is 4% - 8% with a cumulative total of 6.5 million people worldwide (16). Hedayati et al. (17) estimated a total burden of 50,907 (63.7/100,000 general population) SAFS in Iran. These estimations can show the importance of SAFS as one of the most complications of sensitization to Aspergillus in patients with asthma. There are limited reports of SAFS (Table 3) from different countries (3, 8, 18-21). In these reports, various criteria have been considered for evaluating the SAFS and/or AAFS prevalence rate. The reported prevalence rates of SAFS in these studies ranged from 4% to 60% (3, 18-21). According to applied criteria in the present study, the prevalence of Aspergillus sensitization and SAFS was 3.9% and 7.2% in patients with a moderate and severe type of asthma, respectively. In this regard, the rate of SAFS in Moghtaderi et al. (22) and Agin et al. (21) studies from different geographic regions of Iran was 8.5% and 18.0% of asthmatic patients that our results were mostly consistent with Moghtaderi et al. reports (22).

Table 3. Literature Review of SAFS in Patients with Asthma

In different studies, the positivity rate of SPT with A. fumigatus allergen in patients with asthma was reported as 16% (23), 28.7% (24), 39.5% (25) and 17.0% (22). However, a higher positivity rate was reported by the intradermal skin test with Aspergillus allergen in asthmatic patients, which shows the higher sensitivity of intradermal skin test in comparison to SPT (7, 26, 27). Based on our findings, 13.5% of the patients with moderate to severe allergic asthma have positive SPT to Aspergillus allergens, which indicates a lower rate of positivity compared to mentioned studies. Overall, 15.5% of our study population with moderate to severe allergic asthma were sensitive to Aspergillus, according to both sIgEAf test and SPT. This proportion was lower than that reported by O’Driscoll et al. (10) and Black et al. (28), who reported 66% and 54% of sensitivity rates to Aspergillus in asthma patients with SPT, respectively. In addition, Singh et al. (29) have reported a rate of 28.5% for SAFS in a review paper.

In the present study, the reported rates of synchronicity in positivity and negativity results of Aspergillus SPT and sIgEAf were higher than those of reported rate (54%) by O’Driscoll et al. (10) for asthmatic patients. Given that the different fungal species may make up various allergens to stimulate IgE response (30). Furthermore, Aspergillus antigen extracts were prepared from different sources and companies. These could be considered the important reasons for dissimilarity results in different studies. Our finding also showed that patients with asthma might have a positive Aspergillus skin test with a negative result for sIgEAf. On the other hand, it is suggested that the skin test is more sensitive and less specific than sIgEAf test, which may be due to the use of crude antigen in skin test (6). Therefore, the combination of sIgEAf test along with the Aspergillus skin test is recommended to improve the diagnosis of ABPA and SAFS in asthmatic patients (10).

Our results showed a lower mean value of tIgE and sIgEAf in asthmatic patients in comparison to some previous studies (7, 18). However, in line with Bowyer et al. (31) study, our results showed a level of tIgE less than 500 IU/mL in most of the patients with SAFS. The levels of tIgE are one of the most important characteristics for differential diagnosis of SAFS from ABPA in patients with asthma (31). In contrast to ABPA, which generally results from a significant increase of Aspergillus species colonization in the lungs of allergic patients, SAFS is usually relevant to the exposure with temporary or a low-levels of fungal allergens, especially A. fumigatus (31). All of our patients with SAFS or AAFS showed negative results for sIgGAf, which was considered to be one of the main diagnostic criteria for differentiation of ABPA in different previous studies (15, 19, 20). It is suggested that total IgE levels and eosinophil counts might be reduced in patients who have recently received corticosteroids to control the asthma exacerbation.

The drop in total IgE value (< 1000 IU/mL) and/or count of eosinophils, with no evidence of bronchiectasis, might be lead the patient as having SAFS/AAFS (28). On the other hand, corticosteroid therapies in people with allergic diseases, including SAFS and ABPA can lead to a significant increase in fungal burden in the lung, which increases the pulmonary symptoms of affected individuals (32). Pasqualotto et al. (33) reported that appropriate antifungal therapy could be beneficial to reduce eosinophil counts, oral corticosteroid dose, and courses of systemic corticosteroids required in SAFS and ABPA patients. Moreover, Denning et al. (34) showed that oral antifungal therapy in SAFS could lead to significant improvements in the life quality of these patients. Because of significant overlap with ABPA, especially with seropositive ABPA, and given the fact that the therapeutic approach for ABPA and SAFS is different, a proper diagnosis and differentiation of this new phenotype of asthma from ABPA would be critical for the management of the disease.

In conclusion, the prevalence of SAFS and AAFS in Iranian patients with severe and moderate allergic asthma was lower than the previous limited studies worldwide. This low reported rate may be due to the fact that we considered all items in the proposed criteria to diagnose SAFS and AAFS.

The participating patients are appreciated for their kind cooperation, which was essential for the completion of the study.