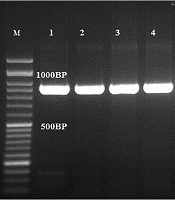 Treatment of ocular infection by fungi has become a problematic issue, particularly in deep lesion cases, because of the limited available antifungals and emerging resistance species.

The present study was designed for molecular identification and studying the antifungal susceptibility pattern of ocular fungi.

Fifty-three ocular fungal isolates, including Fusarium spp., Aspergillus spp., yeast spp., and dematiaceous fungi were collected. Initial identification of each sample was performed using routine mycological techniques. ITS1-5.8SrDNA-ITS2 and translation elongation factor (TEF)-1α regions were used for the identification and differentiation of ocular non-Fusarium and Fusarium fungal species, respectively. The antifungal susceptibility of itraconazole, voriconazole, and posaconazole was determined according to the CLSI guidelines (CLSI M38 and M60, 3rd ed.) for filamentous and yeast species, respectively.

Voriconazole and posaconazole showed excellent activity in all tested isolates; however, some of Fusarium, Aspergillus, and Curvularia strains showed minimum inhibitory concentration (MIC) ≥ 2 μg/mL. The itraconazole showed different results in all species, and high MICs (≥ 16 μg/mL) were found.

Finally, in the present study, we tried to identify species involved in fungal ocular infection using the molecular methods, which highlighted the importance of precise identification of species to choose an appropriate antifungal regime. On the other hand, our findings showed that antifungal susceptibility test is effective to reliably predict the in vivo response to therapy in infections; however, in fungal ocular infection cases, the penetration of antifungals may contribute to predict the outcome.

Fungal ocular infection (also termed as mycotic keratitis or keratomycosis) is a major ophthalmic issue in tropical and subtropical areas, however, it sometimes presents in other high-income countries with temperate climates (1, 2). It has known as the main cause of blindness in Asia (3) and 56% of cases of keratitis were caused by fungi (4). The most predominant fungal pathogens causing mycotic keratitis are Fusarium spp., Aspergillus spp., and dematiaceous spp. (2). Fusarium spp. are considered as the major causes of corneal infection in Iran, Turkey, Taiwan, Thailand, Hong Kong, Brazil, South Florida, Australia, Tunisia, and Ghana (5). Treatment of keratitis has become a problematic issue, particularly in deep lesion cases, because of the limited available antifungals and emerging resistance species. On the other hand, a failure to treat keratitis can result in vision loss.

Management of fungal ocular infection is usually based on the natamycin and topical anti-fungal drugs. Topical amphotericin B 0.3% to 0.5% and voriconazole 1% are prescribed as alternatives to natamycin (6). Oral and intrastromal injection of voriconazole has also been effective in cases of a recalcitrant and deep fungal ocular infection (6, 7). In general, Fusarium spp. have shown the intrinsic resistance to the most routine medications (8). Natamycin 5% is still considered as the first choice in the treatment of fungal ocular infection (9), followed by the voriconazole (10). Antifungal resistance pattern caused by fungal ocular infection is limited; however, in clinics, antifungal-resistant fungal species have been reported. It has believed that the results of clinical response to therapy do not always correspond to in vitro results, which can partly be due to poor penetration of available remedies resulting in misunderstanding of the precise resistance rate of clinical isolates and also the limitation of standardization of antifungal susceptibility tests in the past (1, 11). Different in vitro antifungal activities of Fusarium spp. to routine available antifungals have reported (12-15).

Several studies have reported the in vitro antifungal susceptibility patterns among fungal isolates causing fungal ocular infection. The treatment takes too long and is too expensive, and usually, the outcomes are not satisfactory. The significant strategy to reduce the severity and consequences of the disease is early diagnosis and treatment. Early diagnosis and precise identification of ocular fungal species, as well as the treatment of infected patients, are required to prevent the spread of the disease and its severe complications. Recently, molecular amplification assays, like polymerase chain reaction (PCR) and sequencing have been reported as highly sensitive and specific methods to identify fungal ocular infection at the species level.

The present study was designed for molecular identification and studying the antifungal susceptibility pattern of ocular fungi.

3.1. Sample Collection and Initial Identification of the Isolates

The genomic DNA of all strains was extracted from fresh colony cultured for seven days (for filamentous fungi), and 24 hours (for Candida spp.) using the isopropanol and proteinase K method (16). Briefly, fungal spores were scraped and inoculated in 1.5 mL microtubes with few glass beads; they were frozen quickly in liquid nitrogen, and their cell walls disrupted by pestle. Then, 400 μL of the extraction buffer containing 200 M Tris- HCl (pH 8), 25 mM EDTA, SDS 0.5% w/v, and NaCl 250 mM was added to the reaction mixture, followed by vortexing for 1 minute, adding 8 μL proteinase K, and incubating at 55°C for 60 minutes. Then microtubes containing the above mixture were centrifuged at 1000 ×g for 30 minutes. The liquid phase was transferred to a fresh tube and the genomic DNA was extracted using an equal volume of ice- cold isopropanol and the samples were incubated at -20°C for 60 minutes. Next, it was centrifuged at no more than 12500 ×g for 10 minutes at 4°C. The supernatant was removed and the DNA pellet was washed in 300 μL ethanol 70% then air-dried and resuspended in 50 μL TE buffer (Merck, Germany). DNA was electrophoresed on 1% agarose gel electrophoresis containing DNA safe stain (Simbio, USA) and visualized under ultraviolet (UV) light. The optical density of all DNA samples was measured by NanoDrop (ND- 1000, Thermo Scientific Fisher, US) and stored at -20°C.

3.2.2. PCR Amplification and Sequencing of ITS, TEF- 1α Region

The PCR amplification of ITS1-5.8SrDNA-ITS2 and translation elongation factor (TEF-1α) regions was conducted for the identification and differentiation of cornea by non-Fusarium and Fusarium spp., respectively. A reaction mixture containing 2 μL of the extracted DNA, 12 µL of Taq DNA Polymerase Master Mix White (Ampliqon), 0.5 µL (10 pm/μL) of the ITS1-forward (5’- TCC GTA GGT GAA CCT GCG G -3’) and ITS4-reverse (5’- TCC TCC GCT TAT TGA TAT GC- 3’) (16) and TEF- 1α forward (GTAAGGAGGASAAGACTCACC) TEF-1α reverse (GTAAGGAGGASAAGACTCACC) primers (designed in this study), and ddH2O was added to obtain a total volume of 25 μL. The PCR program was designed as follows: initial denaturation for 2 minutes at 95˚C, 35 cycles of denaturation for 45 seconds at 94˚C, annealing for 45 - 60 seconds (for each primer set) at 58˚C, an extension for 60 seconds at 72˚C, and a final extension at 72˚C for 7 minutes. The amplified products were assessed by electrophoresis on 1.5% agarose gel in TBE buffer (Merck, Germany) and stained with safe stain (Simbio, USA). The products were sequenced and analyzed using the non-redundant nucleic databases BLAST (http://www.ncbi.nim.nih.gov/BLAST/).

The HWP1 gene was amplified to discriminate Candida albicans complex, including C. albicans, C. africana and C. dubliniensis (16). The PCR with paired primers HWP1-F (5′- GCTACCACTTCAGAATCATCATC-3′) and HWP1-R (5′- GCACCTTCAGTCGTAGAGACG-3′) was done using the following condition: 15 minutes at 95°C; 35 cycles of 30 seconds at 95°C, annealing for 30 seconds at 60°C, 20 seconds at 72°C, and a final extension of 1 minutes at 72°C. The bands were confirmed by the determination of the band size.

The conidial suspensions were obtained from Aspergillus spp., dematiaceous spp., and Fusarium spp. after seven days of growth on potato dextrose agar (Merck, Germany) and SDA at 35°C, respectively. For yeast spp., conidial suspensions were prepared from the 24-hour fresh culture at 35°C. Obtained suspensions were counted by hemocytometer, and the cell density was adjusted to 0.4 - 2.5 × 104 CFU/mL, and 0.5 × 103 to 2.5 × 103 for filamentous and yeast isolates, respectively. The antifungal susceptibility testing to itraconazole, voriconazole, and posaconazole was performed according to the CLSI-M38-3rd ed. (for filamentous fungi) (17) and CLSI-M60 (for yeast) guidelines (18). All antifungal agents were purchased from the Sigma Aldrich (USA). Candida parapsilosis ATCC 22019 was used as a quality control strain. All tests were performed in duplicate. Table 1. Comparison of MIC50 and MIC90, and the MIC Range for all Tested Isolates

Fungal ocular infection is common in Iran, and in the present study, Fusarium spp. and Aspergillus spp. were responsible for 82% of the infection cases. Due to lack of molecular identification of fungal ocular infection, the isolates have not been reported previously from Iran. In the present study, 15 isolates out of 22 Fusarium spp. isolates were known as F. solani. However, TEFα sequence data at NCBI BLAST showed that 3 isolates were F. oxysporum, and 5 isolates were identified as F. Keratoplasticum (1), F. fujikuroi (1), F. falciforme (1), F. proliferatum (1), and F. verticillioides (1), which were reported for the first time as a causative agent of fungal ocular infection in Iran. This finding is consistent with that of previous research conducted in Iran that reported Fusarium spp. responsible for most cases of fungal keratitis, followed by Aspergillus spp. and Mucor spp. (13, 19, 20).

Also, in recent studies using ITS sequencing, most isolates were known as F. solani complex (2, 21-24). In a study by Haghani et al., Aspergillus spp., especially A. flavus was reported as the most prevalent etiologic agents (23). ITS sequencing at NCBI BLAST revealed A. flavus (10) and A. fumigatus (7) as the most common etiologic agents of Aspergillus keratitis. In a study conducted in India, A. flavus was reported as the most important agent of Aspergillus keratitis (2). In contrast, A. niger has previously been reported as the most common cause of fungal ocular infection in Iran (21). In the present study, A. orezae and A. terreus were isolated from fungal ocular infection for the first time. In this research, four Curvularia spp., one R. rubra, and one A. alternata species were also identified. In a study from Iran one Curvularia spp. was determined (23). Furthermore, C. albicans strains were responsible for fungal ocular infection.

Itraconazole and synthetic dioxalin and triazole have resulted in a good clinical outcome to treat keratitis caused by Aspergillus and Curvularia, even in severe and non-severe forms of Fusarium keratitis (25). The results of antifungal susceptibility to Fusarium spp. are conflicting, and a poor in vitro activity of itraconazole has been reported (2, 25). It has shown that the susceptibility to antifungal agents is species-related, and the highest MICs of F. solani has been reported (2, 26). In line with previous studies, our results showed that itraconazole has a poor in vitro activity against Fusarium spp. (Table 1). Most F. solani strains had the highest MIC to itraconazole (MIC ≥ 16). The emergence of less common fungal species resistant to itraconazole has been considered as a global concern. In this research, F. oxysporum and F. Keratoplasticum showed MIC ≥ 16, which confirms that voriconazole and posaconazole are better choices to treat corneal infection (P < 0.005).

Finally, in the present study, we tried to identify species involved in fungal ocular infection using the molecular methods, which highlighted the importance of precise identification of species to choose an appropriate antifungal regime. On the other hand, our findings showed that antifungal susceptibility test is effective to reliably predict the in vivo response to therapy in infections; however, in fungal ocular infection cases, the penetration of antifungals may contribute to predict the outcome.