The Epidemiology of Subjective Sleep Quality in the Citizens of Kermanshah, Iran 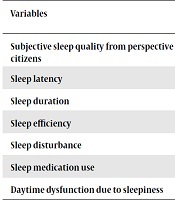 The present study aimed to investigate the epidemiology of subjective sleep quality in the citizens of Kermanshah, Iran.

This cross-sectional, descriptive study was conducted on all the citizens of Kermanshah in 2017. In total, 450 subjects were selected via multistage random sampling. Based on the inclusion criteria, 416 were evaluated using a self-report questionnaire of demographic characteristics and Petersburg sleep quality index (PSQI; Baisi et al., 1989).

In 79% of the participants, the mean score of PSQI was above the cutoff point (m = 6.64). The analysis of the questionnaires indicated the highest frequency of sleep disorders to be in the components of subjective sleep quality from the perspective of the respondents, delayed sleep, sleep disorders, and daily functional disorders. In addition, 10.6% of the subjects used very high doses of sedatives, while 10.3% used relatively high doses of these pills. Minimal sleep disorders were reported as well. Poor sleep quality was less common in women, and significant correlations were observed between age and sleep latency, sleep duration, sleep medication use, and daytime dysfunction due to sleepiness.

According to the results, subjective sleep quality was favorable in the citizens of Kermanshah. Considering the significant effects of sleep quality on performance and quality of life, attention must be paid to this aspect of health by healthcare planners and managers.

Evidence attests to the key role of subjective sleep quality in maintaining the health, quality of life, and efficient performance of individuals in their daily activities. The systems that apply to sleep-wake adjustment overlap and interact with emotion regulation centers, sensations, and other behaviors. A poor sleep-wake cycle and low subjective sleep quality have debilitative effects on the physical, mental, emotional, and cognitive health of individuals (1-4).

Disordered subjective sleep quality is mainly characterized by biological-cognitive variables such as sleep latency, decreased duration of useful sleep, and sleep efficiency, as well as the disruptions in the daily performance that are caused by poor night sleep quality, sleep medication use, and various sleep disorders. Poor subjective sleep quality causes severe damage to physical health (5), thereby leading to cardiovascular diseases (6), cognitive-behavioral disorders, mood disorders (e.g., depression and anxiety) (7, 8), irritability, fatigue, memory and concentration loss (1), loss of appetite, aggression, and anger (9). In addition, these issues adversely affect the performance and progress of individuals in the community (10), giving rise to social and occupational disruptions (11, 12).

According to the findings of Nicolau et al. (18), women had a more unfavorable sleep quality compared to men, and the women in the premenstrual period reported extremely poor sleep quality. Therefore, hormonal changes in women seem to be involved in the reduction of sleep quality. In the study by Simonelli et al., the prevalence of poor sleep quality was reported to be high in low- and middle-income countries due to cultural, population-related, geographical, and health-related factors (19).

The findings of Yatsu et al. (20) indicated the mean score of subjective sleep quality to be 3.3. In addition, the mentioned research demonstrated a correlation between subjective sleep quality and quality of life. On the same note, Eller et al. (8) reported sleep quality to be relatively favorable in 24% of students, while 6% and 1% of the subjects had poor and extremely poor sleep quality. Furthermore, the students were reported have high frequency of sleep latency, interrupted sleep, morning fatigue, drowsiness throughout the day, nightmares, and waking up earlier than usual in the morning.

The findings of Veldi et al. (21) in this regard demonstrated the high frequency of sleep latency, interrupted sleep, and drowsiness throughout the day and in the classroom in students. Similarly, Pagel and Kwiatkowski (22) assessed the sleep patterns of students, reporting that 69.7% of the students with low GPAs had difficulty sleeping. Moreover, 65.6% of the subjects in the mentioned study walked constantly at night due to the inability to sleep, and 72.7% of those with low sleep quality had difficulty concentrating during the day.

In Iran, some studies have been focused on the prevalence of sleep-wake cycle disorders and subjective sleep quality. For instance, Shaygannejad et al. (23) conducted a research on 495 patients with neurological diseases (mean age: 34.92 years), reporting low sleep quality in the participants. In another study regarding the prevalence of sleep disorders in Ahvaz (Iran), Papi et al. (24) reported low and moderate sleep quality in 13.8% and 81.5% of the participants, respectively, as well as severe sleep disorders in 4.6%. In addition, 86.1% of the subjects had slight-to-severe sleep disorders.

Considering the epidemiological research conducted in this regard and the high prevalence of subjective sleep quality in most of these studies, it is crucial to provide data on sleep health services in order to enhance the knowledge of the public and healthcare staff regarding the issue, promote the required interventional measures to reduce the risk of mental and physical damages in citizens, and improve their social and job performance.

The present study aimed to evaluate the epidemiology of subjective sleep quality among the citizens of Kermanshah, Iran.

This descriptive-analytical study was conducted on 416 citizens in Kermanshah, Iran with the mean age of 34.35 years. The participants were selected via multistage random sampling. The inclusion criteria were the age of more than 16 years, willingness to participate, and awareness of citizens. The exclusion criteria were the presence of special diseases (e.g., mental disorders, seizures), use of specific drugs/drug abuse, and citizens obligated to work night shifts.

Data were collected using a self-report questionnaire with two sections of demographic characteristics and the Pittsburgh sleep quality index (PSQI). The first section included the demographic characteristics of the participants, including age, gender, marital status, education level, occupation status, monthly income, daily caffeine intake from all beverages, and smoking habits. The second section was the 18-item PSQI by Buysse et al. (26). In this study, we used the Persian version of the PSQI as prepared by Farrahi Moghaddam et al. (27).

The questionnaire comprised of seven subscales, including subjective sleep quality, sleep latency, sleep duration, sleep efficiency, sleep disturbance, sleep medication use, and daytime dysfunction due to sleepiness, all of which were used to assess the subjective quality of sleep in the participants during one month. The items were scored based on a three-point Likert scale, and the total score of the index was obtained by summing up the scores of the seven subscales (score range: 0 - 21). Scores 0 - 5 indicated very favorable sleep quality, and scores 5 - 11, 11 - 15, and 17 showed relatively favorable, relatively unfavorable, and very unfavorable sleep quality, respectively.

According to Buysse et al. (26), the cutoff point of the PSQI is higher than five, while Backhaus et al. (28) reported the cutoff point to be higher than six; the latter was considered in the present study. In addition, the validity and reliability of the index have been reported to be 0.8 and 0.93 - 0.98, respectively (26). Notably, the reliability and validity of the questionnaire have been confirmed for the Iranian population. In a study by Hassanzadeh et al., the reliability of the index was confirmed at the Cronbach’s alpha of 0.78 - 0.82 (29). In addition, the Cronbach’s alpha of 0.77 has been reported for the PSQI (27), and the Cronbach’s alpha of 0.81 was estimated for the mentioned tool in the current research. The validity of the index was assessed using confirmatory factor analysis, where the fit indices confirmed the validity of the tool.

Data analysis was performed in SPSS version 23 using descriptive and inferential statistics. The subjects were selected via multistage random sampling, and participation in the research was voluntary. The questionnaires were completed anonymously to adhere to confidentiality terms regarding the personal information of the participants. Furthermore, the necessary guidance was provided for the proper collection of the data.

Table 2. Descriptive Indices of PSQI and Its Components in Participants (N = 416)

According to the information in Table 2, the total mean score of the PSQI was 6.64 ± 2.21. Among the components of the PSQI, the prevalence of sleep quality in the components of subjective sleep quality from the perspective of the participants, sleep disturbance, sleep latency, daytime dysfunction due to sleepiness, sleep duration, sleep medication use, and sleep efficiency was estimated at 1.95 ± 0.68, 1.31 ± 0.60, 1.21 ± 0.93, 0.89 ± 0.98, 0.77 ± 0.71, 0.51 ± 0.94, and 0.09 ± 0.36, respectively. In other words, the highest and lowest prevalence was reported in subjective sleep quality form the perspective of the subjects and sleep efficiency, respectively. Table 3 shows the comparison of the participants in terms of sleep quality based on gender, marital status, and age.

Table 3. Comparison of Subjects in Terms of Sleep Quality Based on Gender, Education Level, and Age (N = 416)

In the current research, significant correlations were observed between the sleep quality of the participants and variables of age, gender, and marital status. Accordingly, the sleep quality was more unfavorable in women compared to men, which is in congruence with the results obtained by Wang et al. (17). This finding could be attributed to the differences in the physiological characteristics of women, secretion of female hormones, and hormonal changes associated with menstruation. According to the literature, poor sleep quality is one of the most common symptoms of premenstrual syndrome in women, and decreased estrogen levels due to aging and physiological/hormonal changes during menopause could lead to lighter sleep in women (18). In addition, women experience unfavorable sleep quality due to their social roles (spouse, mother). Another cause of the high prevalence of sleep disorders among women is the higher rate of depression and anxiety compared to men (17). Inconsistent with our findings, Chehri and Parsa (25) reported no significant correlations between sleep quality and the variables of gender, marital status, education level, and occupation status.

The results of the present study demonstrated a significant association between aging and unfavorable sleep quality. Consistent with our findings, several studies have shown that aging leads to changes in the quality and structure of sleep, which in turn cause sleep cycle disturbances and unfavorable sleep quality (17, 22, 23, 25). Nonetheless, it is difficult to determine which sleep changes are directly caused by aging. Sleep-induced waves decrease with age, and segmented sleep with long latency periods leads to unfavorable sleep quality in elder adults through the disruption of sleep patterns (3). Moreover, physical and mental problems in elder adults may increase sleep disorders (4).

Our findings were indicative of a significant association between favorable sleep quality and marital status, so that the single participants had more favorable sleep quality compared to the married subjects. In this regard, our findings are congruent with the results obtained by Wang et al. (17) and Chehri and Parsa (25). The difference between the single and married participants in this regard might be due to the stress caused by more responsibilities later in life, which may adversely affect sleep quality.

One of the major limitations of the present study was the use of a self-report questionnaire for data collection, which had low validity in the estimation of sleep quality. In addition, a cross-sectional design was applied for the assessment of sleep quality within a very short period, which is yet another limitation. Therefore, it is suggested that structured questionnaires be used along with self-report tools. In addition, clinical interviews could be conducted with subjects in order to increase the reliability of the study outcomes. Performing futuristic and longitudinal studies for a period of one year or longer could also yield more valid results.

Hereby, we extend our gratitude to Kermanshah University of Medical Sciences and the participants for assisting us in this research project.