Illicit Drug Use and the Associated Factors Among University Students: A Report in the Southwest of Iran 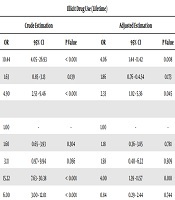 Illicit drug use is a major public health concern among university students.

The present study aimed to determine the prevalence of illicit drug use and the associated factors in a population of Iranian university students.

This cross-sectional study was conducted in Bushehr, located in the Northwest of Iran in 2017. The participants were selected randomly and included 977 university students. Anonymous, structured questionnaires were completed by the students. The self-administered questionnaire consisted of data on illicit drug use, smoking habits, sexual behaviors, alcohol consumption, physical fights, religious beliefs, parental support, and illicit drug use by the family members and friends. Data analysis was performed using chi-square and logistic regression analysis.

According to the results, the prevalence of illicit drug use was relatively low, albeit significant, among the students in Bushehr. Among the determined factors associated with this issue, illicit drug use was strongly correlated with drug use by friends. Our findings could be used for the planning and evaluation of interventions based on the related risk factors.

Young adults are considered to be a potentially risk-taking population, and college transition is a significant period for every individual. Independence, separation from the parents, lack of supervision, and peer pressure significantly increase the risk of illicit drug use by these students, which may lead to academic failure and other issues in life (1).

In general, illicit drug use has been a major public health concern among students in the past few years (2). Illicit drug use is defined as the non-medicinal use of various drugs that are prohibited by international laws, such as amphetamine-type stimulants (ATS), cannabis, cocaine, heroin and other opioids, and ecstasy (3).

Illicit drug use is associated with numerous health problems, including premature death, disability, hepatitis, human immunodeficiency virus, and chronic diseases (4, 5). According to the United Nations Office Drug and Crime (UNODC) report in 2015, one billion individuals or approximately 5% of the global adult population use illicit drugs such as cannabis, opioids, amphetamines, and ecstasy (5). However, the studies conducted in the United States and European countries have indicated a recent upsurge in the prevalence of illicit drug use among students. For instance, the results of monitoring the future (MTF) indicated that the prevalence of illicit drug use among US students in 1991 and 2015 was 50.4% and 53.4%, respectively, which indicated the slightly rising trend in this regard (6). Furthermore, several studies have confirmed the high prevalence of illicit drug use in developing countries (4, 7-9). According to the studies conducted in the Middle East, illicit drug use is common among university students, while the findings reported in India, Kuwait, and Iran have denoted that 7%, 14.4%, and 5.2% of students use cannabis, illicit drugs, and both cannabis and marijuana, respectively (4, 10, 11).

Due to the distinct geographical condition of Iran and its neighboring location with Afghanistan, which is the world’s largest opium producer, illicit drug use is highly prevalent in Iran (12). Young adults constitute the vast majority of the Iranian population who are considered susceptible to illicit drug use (13). A study conducted on Iranian students indicated that hashish, opioids, and ATS are the most commonly used drugs among university students (14). Another study in Iran reported the rate of illicit substance abuse to be 2.9% among university students (9).

Previous studies have identified a number of factors associated with illicit drug use among university students, such as male gender, high-income families, single life, use of other substances (e.g., tobacco and alcohol), and unsafe sexual relations. Moreover, some other factors may be involved in this issues that have received less attention, such as physical fights, religious beliefs, and family support (10, 12, 15).

To date, few studies have been focused on illicit drug use and the associated factors among Iranian university students.

The present study aimed to determine the prevalence of illicit drug use and identify the influential factors in a population of Iranian university students.

This cross-sectional study was conducted on the students of Bushehr University in 2017. The participants were selected via multistage sampling. Initially, the total number of the students of Bushehr University was calculated. Based on the number of the students, the proportion of the required samples was calculated in each college. In addition, classes were randomly selected as a cluster, and all the students of the selected classes were enrolled in the study. Finally, 977 students were selected and completed the self-administrated questionnaires; each student had 15 - 20 minutes to complete the questionnaire. The objectives of the research were explained to the participants, they were assured of confidentiality terms regarding their personal information, and participation was voluntary.

The research instrument has been previously used in the studies in this regard and designed based on the smoking and substance involvement screening test, which has been developed by the World Health Organization (WHO). The contents of the questionnaire have been previously validated by some researchers, and the validity was assessed by pretesting the questionnaire in a class of master of public health students (16). In this questionnaire, the developers have considered the current status of drug use in Iran (9). Initially, a pilot study was performed on 50 students to examine the feasibility of the questionnaire and collect the data to confirm its reliability, and the pilot test input was used to modify the instrument, with the Cronbach’s alpha estimated at 0.90.

The questionnaire included data on demographic variables and use of illicit drugs, such as cannabis, opium, heroin, steroidal substances, and other stimulants (e.g., amphetamine, methylphenidate, Ritalin, and ecstasy) during the lifetime, past year, past month, and daily/almost daily use within the past month.

Some of the items in the questionnaire provided data on the correlations between illicit drug use and other high-risk behaviors, including smoking habits, hookah smoking, alcohol consumption, and drugs use by the family members and friends. In addition, data on unsafe sexual relations and physical fights were collected and evaluated using the questionnaire.

The prevalence of the use of each illicit drug was determine in four different periods, including the lifetime, past year, past month, and daily/almost daily within the past month. As for smoking habits, hookah smoking, and alcohol consumption, data were collected on the past month, while the data on physical fights were recorded for the past year, and the data on unsafe sexual relations were recorded for the most recent intercourse. In the case of illicit drug use, data were collected regarding the lifetime use of the participants.

Data analysis was performed in SPSS version 16 using chi-square and independent t-test for a simple statistical analysis. For the estimation of the crude odds ratios (ORs) and adjusted ORs, univariate and multiple logistic regression models were employed, respectively. In addition, Hosmer-Lemeshow guidelines were used for the selection of the variables in the multiple logistic regression model (18). In all the statistical analyses, the P value of less than 0.05 was considered significant.

The study protocol was approved by the Ethics Committee of Shiraz University of Medical Sciences (ref. no.: IR.Sums.REC.1395.S1246), and written informed consent was obtained from all the participants.

Table 1. Prevalence of Use of Illicit Drugs in University Students Based on Gendera

4.1. Demographic Characteristics and the Correlated Variables with Illicit Drug Use

Table 2 shows the correlations between illicit drug use, demographic characteristics, and the influential factors in illicit drug use. The obtained results indicated significant associations between the lifetime use of the mentioned illicit drugs and gender, smoking habits, hookah smoking, alcohol consumption, working along with education, unsafe sexual relations, physical fights, illicit drug use by the family members and friends, religious beliefs, and family support (P < 0.05). However, the mean scores of religious belief and family support were significantly lower among the students who used any of the mentioned illicit drugs within their lifetime.

Table 2 . Demographic Characteristics and Correlated Variables of Illicit Drug Use in Iranian University Students (2017)a

A logistic model was used to estimate the crude ORs for all the variables (Table 3), and the results indicated that smoking habits had the most significant effect compared to the other variables (OR = 15.22). The univariate analysis also demonstrated that the scores of family support and religious beliefs had significant effects on illicit drug use, and the higher scores of family support and religious beliefs led to the decreased ORs of illicit drug use to 0.95 and 0.98, respectively.

Table 3. Logistic Regression Analysis of Associations Between Illicit Drug Use and Other Factors in Iranian University Students (2017)

Multiple logistic analysis was performed to control the possible effect of the confounding variables (Table 3). According to the information in Table 3, after adjustment for the other factors, male gender (OR = 4.06), working along with education (OR = 2.33), smoking habits (OR = 4.00), physical fights (OR = 4.04), and illicit drug use by friends (OR = 2.71) were associated with illicit drug use. Notably, the final model indicated that family support and religious beliefs had no significant effects on illicit drug use (P > 0.05).

Several studies have confirmed the protective effects of family support and religious beliefs on high-risk behaviors as involvement in religious activities could considerably improve the behaviors of individuals to have a healthy life and comply with normative values (15, 28, 29). Our findings in this regard indicated that the mean score of religious belief was significantly lower in the students with a history of illicit drug use although religious beliefs were not considered statistically significant in the final regression model.

Some studies have denoted a positive association between peer illicit drug use and the prevalence of illicit drug use (9, 34, 35). In this regard, the results of the present study indicated that illicit drug use by friends increased the odds of drug use among the students (OR = 2.71). Entering the university and post-secondary settings, living in the dormitory, and making new acquaintances accompanied with lifestyle changes are some of the influential factors in this regard. Due to the lack of parental supervision and peer pressure, university students are more vulnerable to illicit drug use and considered as a high-risk population. Therefore, educational, recreational, sports, and cultural programs for students, implementing training interventions for their parents, and providing educational interventions on life skills, social skills, and friendship programs could prevent the emergence of risky situations and reduce exposure to illicit drugs (36).

Previous studies have demonstrated the co-occurrence of high risk behaviors, which should be incorporated into the design and implementation of the preventive interventions in this regard (37, 38). It is suggested that comprehensive training and preventive interventions be designed and implemented to effectively reduce the prevalence of high-risk behaviors, such as illicit drug use, among university students.

Due to the cross-sectional design of the study, the casual inference could not be identified based on our findings. Another limitation of the study was the use of self-report data, assuming that the participants completed the questionnaires with honesty.

This article was extracted from an MSc thesis conducted by Sima Afrashteh. Hereby, we extend our gratitude to Shiraz University of Medical Sciences for the financial support of this study (grant no.: 95-01-04-12407). We would also like to thank the participants for assisting us in this research project.