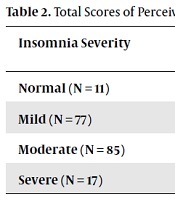 The Correlation of Perceived Stress and Insomnia Severity in Postmenopausal Women

Postmenopausal women experience tremendous changes that are not only hormonal, but also social and emotional, which reduce their quality of life. Limited research has been focused on perceived stress and the influential factors in women during menstruation.

The present study aimed to assess the correlation between perceived stress and insomnia severity in postmenopausal women.

This cross-sectional study was conducted on 190 postmenopausal women referring to the healthcare centers in Kermanshah, Iran in 2019. Data were collected using the individual and sociodemographic questionnaire, perceived stress scale, and insomnia severity index. Data analysis was performed in SPSS using independent t-test, one-way ANOVA, and Pearson’s correlation-coefficient to evaluate the correlation between perceived stress and insomnia severity.

Every woman experiences different crises during their lifetime, which mostly occur during the transitions from one life stage to another or taking on a new role. Puberty, menstruation, pregnancy, childbirth, and menopause are some of the main crises in women's life, which are interconnected as the rings in a chain (1).

Menopause is a critical life stage to women and a milestone that marks the end of the reproductive period (2). In fact, menopause shows the transition from the reproductive ability to infertility. Menopause is a natural phenomenon in women’s lives and is experienced by all women throughout their life. Menopause is personally, socially, and culturally important and recognized as a paramount health issue in the area of women and reproductive health (2, 3). Physiological or artificial menopause is associated with physical and psychological complications and changes, which influence various aspects of life, as well as the familial role of women. In other words, women experience several physical and psychological crises during menopause, which could give rise to physical and mental issues (4). Physical problems in postmenopausal women (e.g., decreased hormone levels) lead to several physical changes, such as hot flashes, nightly sweats, palpitations, headache, dizziness, fatigue, and irritability. Moreover, postmenopausal women are faced with a wide array of psychological issues, including depression, anxiety, stress, and several other problems that are specifically associated with menopause (5).

High levels of perceived stress in postmenopausal women lead to depression and severe health issues, which debilitate psychological health (6). Estradiol and progesterone production decreases within a few years before menopause despite ovulation during the menstrual cycle, and the subsequent lower ovarian follicular activity reduces the negative feedback of estradiol inhibition on the hypothalamic-pituitary system, thereby gradually increasing the follicle-stimulating hormone (FSH). Incrementally, only the follicles that respond less to the FSH remain in the ovary, decreasing the estrogen levels in women’s bodies. This reduction ultimately lowers the activity of serotonin during menopause (7).

About one-third of adults in the world experience sleep disorders, which often exacerbate with age and give rise to some chronic diseases. Sleep disorders are more prevalent in postmenopausal women compared to other adult populations, manifesting as frequent middle-of-the-night awakenings, difficulty falling asleep, waking up precipitately, and insomnia (7). The latter is defined as difficulty falling asleep, frequently waking up in the middle of the night or difficulty getting back to sleep, waking up very early in the morning, and sleep that does not freshen-up the individual (8). Insomnia occurs due to various causes, such as anxiety, emotional stress, and the inability to regulate emotions. On the other hand, insomnia could exacerbate stress, anxiety, and depression (9, 10).

The present study aimed to evaluate the correlation between perceived stress and the severity of insomnia in postmenopausal women.

This cross-sectional, analytical study was conducted on all the postmenopausal women referring to the healthcare centers in Kermanshah, Iran in 2019. Initially, the city of Kermanshah was divided into four geographical districts based on the socioeconomic status of the citizens, and a total of 20 healthcare centers were identified. One clinic was randomly selected from each district, followed by selecting the desired number of the samples from each selected clinic based on the quota of each clinic via convenience sampling.

After determining the number of the selected individuals, 200 women were selected as subjects via random sampling based on the following inclusion criteria:

• Natural menopause (i.e., menstruation by taking medication or surgical removal of the ovaries);

• A minimum of one year since the last menstruation;

• No hormone therapy and use of the medications that reduce menopausal symptoms;

• Willingness to participate in the research

Data were collected using a demographic questionnaire, the perceived stress scale (PSS), and insomnia severity index (ISI). ISI is a brief self-assessment tool used to measure the perception of insomnia. This one-dimensional tool consists of seven subscales, and the items are scored based on a four-point Likert scale (Never = 0, Low = 1, Moderate = 2, High/Extremely High = 4). The score range of ISI is 0 - 28, and the higher score indicated the higher level of perceived stress. Moreover, the total scores of 0 - 7, 8 - 14, 15 - 21, and 22 - 28 showed natural sleep, and mild, moderate, and severe insomnia. Notably, the reliability and validity of the Persian version of the scale have been confirmed by Yazdi et al. (11).

PSS consists of 14 items, such as “In the last month, how often have you been upset because of something that happened unexpectedly?”, and “In the last month, how often have you felt difficulties were piling up so high that you could not overcome them?” The responses to the questions were used to evaluate the perceived stress of the participants within the past one month. The validity and reliability of the Persian version of PSS have been confirmed by Maroufizadeh et al. (12). Notably, items 4 - 7, nine, 10, and 13 were scored reversely. All the items were scored based on a five-point Likert scale (Never = 0, Low = 1, Moderate = 2, High = 3, Extremely High = 4). The score range of PSS was 0 - 56, and the higher scores showed higher perceived stress.

Data analysis was performed in SPSS using descriptive statistics (mean, standard deviation, frequency, and percentage), and the Kolmogorov-Smirnov test was used to evaluate the normal distribution of the quantitative data. In addition, t-test, one-way ANOVA, and Pearson’s correlation-coefficient were applied to assess the correlation between perceived stress and severity of insomnia. In all the statistical analyses, the P value of less than 0.05 was considered significant.

In total, 10 participants were excluded from the research, and the data of 190 women were evaluated. The mean age of the subjects was 56.1 ± 5.7 years, the mean age at menopause was 49.9 ± 4 years, and the mean duration of menopause was 6.3 ± 5.1 years. According to the results, 70% of the women were married, and 60% had primary education. Underlying diseases were reported in 60% of the subjects (Table 1).

aSignificant difference between severe insomnia and other groups.

Evidence suggests that insomnia and stress often occur simultaneously and have common conditions. The overlapping mechanisms in the central nervous system (CNS) are indicative of the common neurobiological context that may contribute to the development of these disorders. Considering the key role of the mesolimbic dopamine system in the regulation of the symptoms of insomnia and stress, the examination of the neurological processes involved in the development and exacerbation of these symptoms could be beneficial. Other neurotransmitters (e.g., serotonin and norepinephrine) are also involved in the development of the broad CNS areas that connect sleep to mood. Furthermore, sleep arousal in chronic insomnia activates a sympathetic stress response by catecholamines, which may increase stress (13). Middle-aged women experience extreme changes that are not only related to hormonal alternations, but are also associated with emotional and social changes. Women are often faced with more stressful events in life than men, leading them to draw a more negative outcome from these events (5).

In the current research, the mean total score of perceived stress in the menopausal women was estimated at 34, which was higher compared to the other studies in this regard. The study by Karimi et al. was conducted on pregnant women, and the total mean score of perceived stress was reported to be 25. In addition, Cuadros et al. performed a study on 235 women aged 40 - 56 years, and only 61% of experienced menopause. According to the results of the mentioned study, the mean total score of perceived stress was 16, and the levels of stress and insomnia were reported to be higher in postmenopausal women compared to normal women as the scores obtained in the questionnaires were above average. Furthermore, physical complications (e.g., hot flashes and night sweats) and mental complications (e.g., sex drive) were reported to have a significant impact on the stress and insomnia levels of the postmenopausal women (5). In the mentioned research, the median age of the subjects was 52 years, which is lower than the present study, and the difference in the findings could be due to the effects of age and psychosocial characteristics. Normally, the middle-aged women in the Iranian community do not regularly engage in sports or social activities. Considering the literacy level of the women in the current research, they also limited professional activity, which affected their social relations, as well as their sleep cycle and perceived stress levels.

According to the literature, the prevalence of insomnia in middle-aged women may be 40% - 60% depending on the applied diagnostic criteria (7). The severity of insomnia is correlated with the quality of life, physical and psychological health, life satisfaction, social participation, vasomotor symptoms, depressed mood, and the factors related to spouses (e.g., sexual satisfaction) (5, 14, 15). This rate increases with aging and is higher in women compared to men (16). However, data is scarce regarding the influential factors in sleep disorders in Iranian postmenopausal women.

In a study, Yazdi et al. evaluated 380 postmenopausal women in Qazvin (Iran) in terms of insomnia, reporting moderate and severe insomnia in 20% of the participants based on the ISI (17). On the other hand, Bahri et al. examined 100 women aged 45 - 60 years and observed a significant difference in the mean score of anxiety at various insomnia severities, with the highest mean score of anxiety observed at the maximum insomnia severity (18).

In a cross-sectional research, Azhari et al. aimed to determine the correlations between lifestyle, perceived stress scores, and sleep quality in postmenopausal women. According to the results of the health promoting lifestyle profile II questionnaire and Pittsburgh sleep quality index, the highest and lowest scores of the behavioral dimensions of lifestyle belonged to spiritual growth/accountability for health and physical activity, respectively. Moreover, a significant, reverse correlation was observed between sleep quality and perceived stress (6). Our findings are in line with the results of the mentioned study regarding the role of sleep disorders in the level of perceived stress in postmenopausal women.

One of the limitations of the present study was the cross-sectional design. In addition, the study had a small sample size, and the subjects were selected from urban regions; therefore, the results could not be generalized to other populations. Another potential limitation was that using a questionnaire only allowed the mental evaluation of sleep; this is in contrast to the use of polysomnography, which objectively evaluates sleep characteristics. However, it is notable that screening tools should be as cost-effective as possible. Despite the mentioned limitations, this was the first study to provide the data of postmenopausal women to assess the correlation between perceived stress and insomnia using valid tools.

Copyright © 2020, Journal of Kermanshah University of Medical Sciences. This is an open-access article distributed under the terms of the Creative Commons Attribution-NonCommercial 4.0 International License (http://creativecommons.org/licenses/by-nc/4.0/) which permits copy and redistribute the material just in noncommercial usages, provided the original work is properly cited.
download pdf 115.62 KB Get Permission (article level) Import into EndNote Import into BibTex
Number of Comments: 0