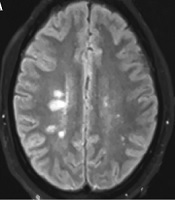 A 25-Year-Old Clinically Isolated Syndrome Patient with Tumefactive Demyelinating Lesion in Cervical Cord: A Case Report and a Mini Review

This study aimed to present a case of a clinically isolated syndrome (CIS) with a reported tumefactive demyelinating lesion (TDLs) in the cord. The patient was a 25-year-old woman who referred to MS Clinic complaining of walking impairment and a blurred vision in the right eye. In the magnetic resonance imaging (MRI) of the brain, there were several periventricular plaques, a significant portion of which had enhanced, but none of the lesions was tumefactive. In the cervical MRI, however, several tumefactive plaques appeared with a clear enhancement and expansion, which was central-based in the axial view. Concerning the involvement of the cervical cord, further examinations were conducted of anti-aquaporin and anti-myelin oligodendrocyte glycoprotein (MOG) antibodies, which were negative. The patient was treated with 1g methylprednisolone daily injection for five days; her symptoms recovered completely. Then, due to the extent of the involvement, rituximab was prescribed for her. Unlike the TDLs of the brain, little attention has been paid to these lesions in the cord. Here, firstly a case of CIS with a tumefactive lesion reported in the cord is investigated, and then, by examining similar cases, we try to find a definition for cord TDLs.

Tumefactive demyelinating lesions (TDLs) are well-known lesions in multiple sclerosis (MS). TDLs are defined as demyelinating lesions greater than 2 cm. These lesions can occur at the onset of the illness or in the course of the MS disease, or as the MS medication complications (1). Multiple reports of tumefactive lesions are mainly related to brain involvement, and cord tumefactive lesions have not been much dealt with. Here, first, a case of a clinically isolated syndrome (CIS) with a tumefactive lesion reported in the cord is investigated, and then, by examining similar cases, we try to find a definition for cord TDLs.

The patient was a 25-year-old woman who, in September 2018, referred to MS Clinic of Sina Hospital complaining of walking impairment and a blurred vision in the right eye. Disease symptoms had begun two weeks before her reference. The patient did not complain of any fever and infection and had not received any special medication. The patient’s family history in terms of autoimmune diseases was negative. Visual examination of the right eye showed 5 m counting finger (CF). Ophthalmoscopy examination was normal, but Marcus Gunn was positive in the involved eye. Eye movements were painful in the involved eye. The muscle strength, in the lower limbs, was about 4/5 and in distal upper extremities was about 3/5. The patient’s reflexes had increased and she had bilateral Babinski signs. Other examinations of the patient were normal. She had a history of blurred vision of the left eye in the last eight months, which had improved after a week without any treatment. In the magnetic resonance imaging (MRI) of the brain, there were several periventricular plaques, a significant portion of which had enhanced, although none of the lesions was tumefactive (Figure 1A and B). In the cervical MRI, however, several tumefactive plaques appeared with a clear enhancement with expansion, which was central-based in the axial view. Each tumefactive plaque was less than three vertebrae in length and wasn’t considered as longitudinally extensive transverse myelitis (LETM) (Figure 1C and D). With regard to the involvement of the cervical cord, further examinations of anti-aquaporin and anti- myelin oligodendrocyte glycoprotein (MOG) antibodies were conducted, which were negative. Other tests including biochemical examinations as well as vasculitis and human immunodeficiency virus (HIV) tests were also negative. Regarding the typical brain MRI manifestation and a history of two attacks, and considering negative vasculitis tests, the MS diagnosis was confirmed. So, cerebrospinal fluid (CSF) examination was not prescribed. The patient was treated with 1 g methylprednisolone daily injection for five days; her symptoms recovered completely. Then, due to the extent of the involvement, rituximab was prescribed for her. 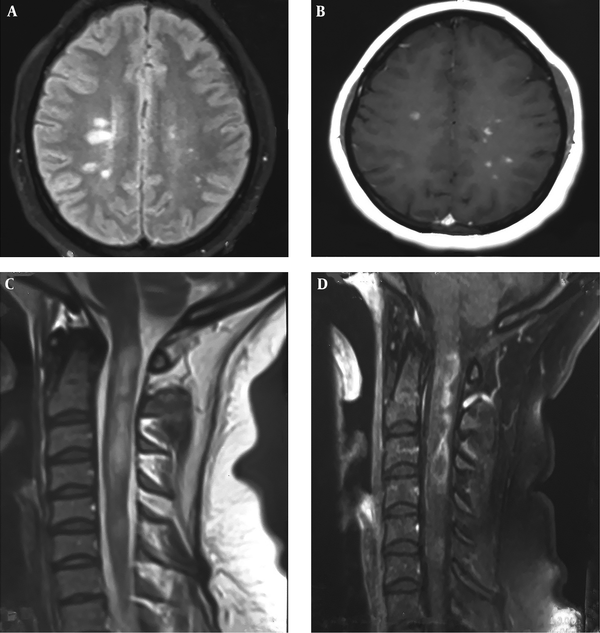 Magnetic resonance imaging (MRI) of the brain and cervical cord

In dealing with such a disease, it is important to pay attention to other possible causes. Although the involvement of the brain and also the history of a previous attack diminishes the diagnosis of neoplasm and since the level of tumefactive involvement is generally rare in the cord, in particular, the differential diagnosis should thoroughly be studied. Hence, the patient was examined for neuromyelitis optica (NMO) and MOG-related disorders as well as vasculitis diseases, which were all negative.

Another important cause of the extensive cord involvement is acute disseminated encephalomyelitis (ADEM). However, the history of a previous attack and the existence of periventricular plaques in the brain, some of which were enhanced and some were not, were against the diagnosis of the ADEM disease and confirmed the diagnosis of CIS.

Unlike the TDLs of the brain, little attention has been paid to these lesions in the cord. There is not even a clear definition in this case. Reviewing the literature, the author found only five cases of cord involvement with TDL; unfortunately, one of these articles was not available (2-6). Another case was reported in a paper in Japanese, so only the information in the English abstract was used (Table 1).

Table 1. The Demographic, Clinical and Paraclinical Features of Reported Patients

In the data obtained, the ratio of females to males in case of cord involvement with TDL was 4 to 1. The average age of the patients was 32.8-years-old and they mainly referred due to weakness in the lower extremities. The site of the involvement was variable including cervical cord, thoracic, and conus medullaris. Among the important points in this regard was the examination of differential diagnosis. It is important to pay attention to NMO as well as MOG. Of course, in the first reported cases, no investigation was performed since there were no such specialized tests.

There was no specific definition in these cases for TDL of the spinal cord. Since the anatomy of the spinal cord differs from that of the brain and the lesions have a small area for expansion due to oedema and/or the lesion itself, a different definition may be needed for this form of lesions. Due to the similarity of these lesions with tumoral lesions, the lesions in the spinal cord which are more than 2 cm in length are considered tumefactive lesions (similar to the brain tumefactive lesions). However, since some MS plaques or isolated transverse myelitis, without resembling the tumoral lesion, are more than 2 cm in length, these lesions are called tumefactive when they are associated with expansion. In summary, TDLs of the cervical cord are defined as plaques resembling the tumoral lesions more than 2 cm in length associated with expansion. These lesions are different from LETM. LETM is more than three vertebrae in length and may have no lesional expansion. In addition, other possible causes of tumefactive lesions, tumoral lesions, and NMO, in particular, should be ruled out.

As noted, little attention has been paid to these lesions. We do not know what their prevalence rates are in the MS and CIS diseases and how much is the probability of a patient having a single tumefactive demyelinating lesion with cord involvement, becoming an MS patient. Also, the demographic and clinical status of these patients is unclear. These facts remind us of the need to pay more attention to such involvements of the cord.

Copyright © 2020, Journal of Kermanshah University of Medical Sciences. This is an open-access article distributed under the terms of the Creative Commons Attribution-NonCommercial 4.0 International License (http://creativecommons.org/licenses/by-nc/4.0/) which permits copy and redistribute the material just in noncommercial usages, provided the original work is properly cited.
download pdf 2.14 MB Peer Review Comments ( 109.09 KB) Get Permission (article level) Import into EndNote Import into BibTex
Number of Comments: 0