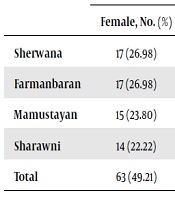 The present study aimed to describe the general health status of individuals considering the environmental incivilities in various areas of Kalar city, Iraq.

This casual-comparative study was conducted in four distinct areas of Kalar city, which were selected purposively. The sample population included 128 participants, who were randomly selected from these areas. Data were collected using a researcher-made questionnaire of environmental incivilities and the general health questionnaire (GHQ-28). Data analysis was performed in SPSS version 22.

The descriptive data indicated the higher scores of the general health status and environmental incivilities in older inhabited areas of the city, and the ANOVA results implied that the differences in this regard were significant (P < 0.01). In addition, the results of Pearson’s correlation-coefficient showed a positive association between the general health scores and environmental incivilities (P = 0.001; r = 0.249). Nonetheless, no significant differences were observed in term of the age and gender of the participants.

According to the definition by the World Health Organization (WHO), health is the state of full physical, mental, and social wellbeing, rather than the absence of diseases or disabilities. As such, not only health implies the absence of various diseases, but it also encompasses mental and social wellbeing. Since health is a mental and multifaceted concept (1), the living environment of individuals plays a pivotal role in their health and is regarded as an inclusive index (2).

According to the literature, environmental incivilities adversely affect the quality of life, which is an important component of human health (3). Environmental incivilities are any aspects of the environment that are perceived by hearing, observing, touching or smelling and may cause negative emotions in humans (4). Ample evidence attests to the significant correlation between the living location and health of individuals in an area regardless of their personal traits (e.g., age, gender, socioeconomic status) (5-8). For instance, access to a proper living environment (e.g., green spaces) for walking or sitting or places for children to play have a positive impact on human health (9, 10). In addition, access to green spaces provides opportunities for physical activities, social integrity, and improved psychological state (11), while the reduced accessibility of green spaces may lead to some health consequences (12). In this regard, some studies have indicated associations between the accessibility of public parks, various aspects of health, psychological wellbeing (13, 14), and general health (15), while unsuitable environmental status is correlated with anxiety, depression, and increased likelihood of smoking habits (4).

The infrastructure status of residential areas is another influential factor in human health. For instance, some researchers have reported the adverse effects and potential hazards of power plants and cell sites on health (16, 17). Furthermore, sewage smell in residential areas and lack of access to open spaces as environmental incivilities are negatively correlated with the physical and general health of individuals (18, 19).

In Iraq, Garmian region in general and Kalar city in particular are among the locations in Kurdistan territory that are affected by various sociopolitical factors due to their geographical features, which in turn exert detrimental effects on public health. Therefore, any other threatening factors may become a crisis.

The present study aimed to describe the general health status of the residents of Kalar city, Iraq considering environmental incivilities.

This causal-comparative research was conducted in Kalar city, located in Garmian region of Kurdistan-Iraq (estimated population: 250,000) (20), during December 2018-March 2019. The sample population consisted of 150 inhabitants of the city, who were selected from the four districts of Sherwana, Farmanbaran (older area), Mamustayan, and Sharawni (newly established). The districts were selected purposively based on the distribution of various welfare facilities and environmental characteristics, and 30 - 40 citizens were randomly selected from each region (age: 18 - 50 years). In general, the newly established districts had more environmental facilities compared to the other districts.

This questionnaire consisted of 18 items, two of which were focused on demographic characteristics (age and gender), and 16 items evaluated the features of environmental incivilities. The items of the questionnaire also assessed factors such as access to green spaces, playgrounds for children, noise pollution, garbage collection, asphalt/soil surfaces of alleys, sewage-oriented pollutants, and alley design based on urban construction standards. The initial form of the questionnaire was prepared by the researchers. After a survey performed by some experts in the fields of psychology, sociology, environmental sciences, geography, and municipal engineering, the designed questionnaire was provided to some experts in the field of design surveys. A binary (0 and 1) scoring method was utilized for the questionnaire, and the scores of the participants were calculated within the range of 0 - 16. The total score was obtained by summing up the scores of all the items, and the higher scores represented more environmental incivilities. The initial version of the researcher-made questionnaire was examined in a sample of 50 subjects from the same population, and the psychometric features were considered appropriate (α = 0.75).

GHQ-28 is a self-report tool, which has been used in numerous studies to assess general health and mental health. The GHQ has four subscales, each with seven items, which are scored based on a Likert scale (Not at All = 0, Always = 0). The scores of every subject in each subscale are determined separately, and the scores of the four subscales are summed up to obtain the total score; the total score of higher than 23 is indicative of deteriorated health (21). The validity and reliability of the Kurdish version of GHQ-28 have been confirmed in a research conducted on a sample population in this area (22) and at the Cronbach’s alpha of 0.69 in the present study.

Although the participants achieved high scores in all the subscales (especially anxiety and social performance; P > 0.05), the differences in this regard were only significant in the depression subscale (P < 0.05), and the residents of the older districts (Sherwana and Farmanbaran) were observed to be more depressed comparatively. In the current research, Pearson’s correlation-coefficient was applied to determine the correlation between environmental incivilities and the general health of the participants (Table 3).

Table 4. Results of T-Test on Comparison of Men and Women

Environmental incivilities (e.g., pollution) affect human health directly and indirectly. In the districts where sports activity areas were considered for the youth, the likelihood of such activities was higher in leisure time, which led to positive health outcomes. In addition, access to public green spaces, along with opportunities for physical activities, could improve social integrity and the psychological state by increasing the interactions among the inhabitants of a district (11), which in turn positively influenced the health status of the individuals. Some studies have demonstrated the associations between the accessibility of public parks, various aspects of psychological health, wellbeing (13, 14), and general health (15).

Although the difference between our participants was only significant in the depression subscale, all the subjects obtained high scores in the four subscales of general health. The highest scores belonged to the subscales of anxiety, social performance, depression, and physical symptoms, respectively. This is consistent with a study regarding the general health of the students of the University of Garmian, which is located in Kalar, using the same questionnaire. In the mentioned study, it was reported that more than 90% of the participants achieved higher scores than the cutoff point, and the highest scores also belonged to the subscales of anxiety, insomnia, and social performance (23). On the other hand, another study in this regard indicated that more than 80% of the participants had social phobia (24).

According to a similar research (4), environmental incivilities may be accompanied by increased anxiety and depression. In this regard, our findings showed that incivilities were more commonly associated with increased depression and the general health scores rather than anxiety. It is noteworthy that regardless of the differences between the four groups in the current research, the total scores of general health and its subscales were higher than the cutoff point in all the groups. Therefore, it could be concluded that the health issues in these individuals may have had other origins than environmental incivilities. The residents of Garmian region (especially Kalar city) have experienced various social and political upheavals, which might have had specific health implications. Garmian region borders Iran, as well as the southern and Arab regions of Iraq, which has caused the residents of the region to experience noticeable unrest during the Iran-Iraq war and Iraqi civil war. In addition, the region has been one of the main locations of the Baath party’s series of military operations, known as Anfal, in which over 182,000 individuals were massacred (25). Research has confirmed that the experience of such events increases the risk of physical and psychological problems (26). As such, it seems that the high scores of the subjects in general health and its subscales were influenced by a series of past and present complex relations, as well as environmental incivilities.

Some of the limitations of the study were as follows:

2. Use of a self-report tool for data collection;

3. Sample loss and small number of the selected districts;

4. The interdisciplinary nature of the study would not allow for the control of the possible contributing factors. Therefore, it is recommended that further investigations in this regard be focused on a wider range of environmental incivilities to examine the impact of each of these issues independently.

Copyright © 2020, Journal of Kermanshah University of Medical Sciences. This is an open-access article distributed under the terms of the Creative Commons Attribution-NonCommercial 4.0 International License (http://creativecommons.org/licenses/by-nc/4.0/) which permits copy and redistribute the material just in noncommercial usages, provided the original work is properly cited.
download pdf 143.01 KB Get Permission (article level) Import into EndNote Import into BibTex
Number of Comments: 0