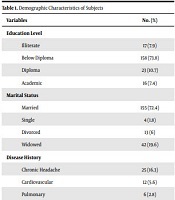 Menopause is associated with physical and psychological as well as sleep problems that cause disruption in quality of life in women.

The question of whether the severity of physical and psychological symptoms correlated with the severity of insomnia in postmenopausal women is investigated in this study.

The mean total score of insomnia severity was 14.3 ± 5. Also, according to the severity of insomnia, 22 women had no insomnia, but 88 and 87 women had mild and moderate insomnia and 17 women had severe insomnia, respectively. Comparing the mean scores of 11 MRS items in different insomnia severities showed a significant difference in the rate of symptoms, so that in the physical domain, hot flashes and sleep problems, and in the psychological domain, depression items, irritability, anxiety, poor memory and lack of concentration were higher in the sever insomnia, but none of the items of the genitourinary domain were associated with the severity of insomnia.

Menopause is a natural stage of the sexual life of women, which is associated with numerous issues (1, 2). Women’s fertility begins to decline with menopause, marking the end of their reproductive age. The World Health Organization (WHO) defines natural menopause as the permanent cessation of menstruation resulting from the loss of ovarian follicular activity or follicle depletion. Therefore, a menopausal woman has stopped menstruating for a minimum of one year, and the cessation is unrelated to pregnancy, lactation, or other hormonal disorders (3). Menopause occurs as the ovaries lose their reproductive function, and ovulation discontinues (4). Menopause may also be triggered by lifestyle or specific medical procedures (5). Although menopause is not considered an illness or defect and causes no particular issues in women, it differs in terms of several factors in every woman (6). However, the reduced production of estrogen in the perimenopause phase causes severe, short-term complications, and menopausal women may experience problems such as blood pressure changes, aggression, irritability, and depression, which adversely affect their family and social affairs (7).

Transition into menopause is associated with various physical and mental changes, which may reduce women’s quality of life. In fact, physical problems (e.g., lowered hormone levels) cause physical changes in women’s bodies and lead to issues such as hot flashes, night sweats, palpitation, headache, dizziness, fatigue, and irritability. Moreover, menopausal women experience a wide range of psychological problems, including depression, anxiety, and stress, which are often induced by the specific experiences in the menopausal stage. The menopausal decline of estrogen also contributes to disrupted sleep (8). On the other hand, postmenopausal women experience hot flashes due to an abrupt estrogen withdrawal rather than hypoestrogenism. In addition, menopause causes agitation and the cessation of daily activities, as well as sleep disruption and insomnia in women (9).

Insomnia is a sleep disorder studied in sleep psychology and is generally defined as the inability to fall asleep or stay asleep at night (10). Insomnia could be caused by several factors, such as anxiety and emotional stress, while the symptoms of stress, anxiety, and depression also increase with insomnia (11, 12). In postmenopausal women, insomnia may be affected by hormonal and physiological factors in addition to age and psychological factors. Nonetheless, the correlations between physical and psychological symptoms and insomnia severity in menopausal women remains to be further investigated.

The present study aimed to evaluate the correlations between psychological and physical issues and insomnia severity in menopausal women.

This study was conducted on the menopausal women referring to the healthcare centers in Kermanshah, Iran during May 2018 - 2019. Initially, we divided Kermanshah into four geographical areas that included all the healthcare centers of the city, and one clinic was randomly selected from each area. The subjects were selected from these clinics via convenience sampling based on the quota of each clinic. After determining the number of the patients, the participants were selected via random sampling.

The inclusion criteria of the study were as follows: (1) age of 47 - 67 years; (2) natural menopause; (3) living in Kermanshah; (4) not receiving hormone therapy or medications affecting the symptoms of menopause; (5) no use of sleeping pills; and (6) basic literacy.

Data were collected using a demographic questionnaire (age, marital status, age at menopause, and underlying diseases), insomnia severity index (ISI), and menopause rating scale (MRS). Ethical considerations were respected by obtaining the informed consent of the patients to complete the questionnaires and ensuring them of confidentiality terms regarding their personal information.

The ISI is a seven-item, single-dimension questionnaire used for the assessment of the nature, severity, and impact of insomnia. The items in the scale are scored based on a five-point Likert scale (never = 0, extremely = 4) within the score range of 0 - 28; the higher scores are indicative of higher perceived stress. As for the total score of the ISI, scores 0 - 7 shows the absence of insomnia, scores 8 - 14 show sub-threshold insomnia, scores 15 - 21 indicate moderate insomnia, and scores 22 - 28 indicate severe insomnia. Notably, the validity and reliability of the Persian version of the ISI have been confirmed by Yazdi et al. (13).

The MRS is an international and valid tool used for the assessment of menopause symptoms. This tool has been applied in several clinical and epidemiological studies to determine the frequency and severity of the symptoms of menopause in middle-aged women (12). The MRS measures 11 menopause symptoms in three dimensions of physical symptoms (hot flushes, night sweats, heart discomfort, sleeping problems, and muscle/joint problems; 4 items), psychological symptoms (depressive mood, irritability, anxiety, fatigue, and memory loss; 4 items), and urogenital symptoms (sexual problems, bladder problems, and vaginal dryness/itching; 3 items). The items in the MRS are scored based on a five-point Likert scale, with score one assigned to the option 'no symptoms' and score five assigned to the option 'severe symptoms'. The total scores of the MRS is calculated within the range of 11 - 55, with the higher total scores or scores of each dimension/item indicating the higher severity of menopause symptoms (14).

Data analysis was performed in SPSS version 16 using descriptive statistics (frequency, percentage, mean, and standard deviation) to describe the social and individual characteristics, physical/psychological symptoms, and insomnia severity of the patients. In addition, the Kolmogorov-Smirnov test was applied to assess the normal distribution of the quantitative data, and Tukey’s test was used to analyze the data based on the statistical tests of analysis of variance (ANOVA). Pearson’s correlation-coefficient was also employed to evaluate the correlations between the physical/psychological symptoms of the patients and insomnia severity. In all the statistical analyses, the P-value of less than 0.05 was considered significant.

In total, 268 menopausal women were assessed, and 42 and 12 cases met the inclusion criteria and were excluded from the research due to incomplete questionnaires, respectively. Eventually, data of 214 subjects were assessed. The mean age of the participants was 55.8 ± 6.2 years, the mean age at menopause was 49.6 ± 4.2 years, and the mean duration of menopause was 6.1 ± 4.9 years. Overall, 72% of the participants were married, and 58% had underlying diseases (Table 1).

Table 2. Comparison of Scores of Physical/Psychological Symptoms Based on Insomnia Severity a

b Moderate group higher than normal and mild groups.

Table 3. Correlations of Physical and Psychological Factors with Insomnia Severity in Menopausal Women

Sleep helps the human body improve physically and allows the brain to arrange and save daily information, through which it combines knowledge, memory, and emotions (15). Sleep disruption and daytime sleepiness adversely affect the quality of life and increase the risk of mortality and morbidity (15, 16). According to several population-based assessments, sleep problems increase with aging (17), while the exact role of simultaneous conditions remains unknown (15, 18). According to statistics, the prevalence of insomnia is relatively high in postmenopausal females (30 - 60%) (18, 19).

Polysomnographic findings have demonstrated that postmenopausal women show less overall awakening time and efficiency compared to premenopausal women (19). In the present study, about 89% of the women had some degree of insomnia, with 48% experiencing moderate or severe insomnia, which is higher compared to other studies. The high severity of insomnia detected in our participants might be attributed to factors such as social class, education level, and economic status, as well as hormonal and physiological factors (18-20). In general, women with a poor sociodemographic status (e.g., low income and education level) experience higher insomnia severity. In addition to the increased symptoms of menopause, depression, and insomnia due to aging and hormonal changes (21, 22), socioeconomic issues and stress could also intensify anxiety, thereby leading to more severe insomnia compared to ageing and hormonal changes.

In the present study, a significant correlation was observed between insomnia severity and the score of each item of the physical and psychological dimensions. Several factors contribute to insomnia during menopause, including hot flashes, anxiety and depression, other medical disorders, and behavioral, psychological, and social factors. Given the extreme overlap of hot flashes and insomnia as reported in numerous studies, these events may be triggered by a common mechanism in the central nervous system in response to the fluctuations of estrogen levels. Studies have demonstrated a bilateral association in this regard through which vasomotor symptoms may interfere with sleep, and sleep disruption may in turn affect the threshold at which vasomotor symptoms are perceived as disturbing (23). In this regard, the domino theory connects several factors, demonstrating that hot flashes disturb sleep and cause insomnia, which increases susceptibility to depression and anxiety. Nonetheless, sleep disorders could predict mood disturbances more accurately compared to vasomotor symptoms, which indicates that sleep could affect mood through other psychological mechanisms as well (24, 25).

Medical conditions such as obesity, gastroesophageal reflux, bladder dysfunction, thyroid dysfunction, chronic pain, and hypertension are known to threaten sleep quality and are common among menopausal women. According to the literature, menopausal women with insomnia have more problems with spontaneous and cardiovascular regulation (e.g., nocturnal hypertension) compared to the menopausal women without insomnia. In the current research, a large number of the subjects had underlying diseases. The major causes of sleep disorders in middle-aged women include poor sleep hygiene, voluntary factors, environmental disorders, marital dissatisfaction, childcare requests, grandchildren and/or elderly parents, and financial concerns (25). The clinical importance of insomnia in menopausal women is so high that its lack of treatment adversely affects women’s physical and psychological symptoms. Therefore, insomnia should be considered a disorder that requires special attention and treatment.

One of the limitations of our study was assessing the mental responses of the subjects to the severity of menopausal symptoms and insomnia as the research criteria. It is recommended that more objective scales be used in similar studies in the future.

According to the results of the present study, physical and psychological symptoms were more prevalent in the women experiencing insomnia with a higher severity. However, no significant associations were observed between insomnia and urogenital factors in the women. In conclusion, it is suggested that further clinical investigations and interventions be carried out to improve the sleep quality of menopausal women and assess the possible negative impact on the physical and psychological symptoms of these individuals.