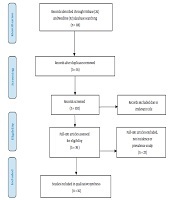 Epidemiological Evidence of the Recent Surge in MS in Asia and Australia: A Systematic Review

Recently, the incidence and prevalence of multiple sclerosis (MS) have increased drastically in different regions of the world, including Asia. The present study aimed to systematically review the recent MS epidemiology in Asia, New Zealand, and Australia.

A systematic literature search was performed in Medline and Embase databases to retrieve the available studies regarding MS epidemiology in Asia, New Zealand, and Australia.

Most of the studies were performed in hospital settings. The female-to-male ratio in the sample populations varied from 1.5:1 in Turkey to 5:1 in Malaysia. The total mean age at the onset of MS varied from the minimum of 28 years in Hong Kong to the maximum of 36 years in the United Arab Emirates. Among 16 pertinent studies in this regard, seven addressed the incidence rate of MS, and 13 addressed the prevalence of the disease. The highest prevalence rate was reported to be respectively 124.2 and 148.06 in Australia and Iran versus 2.73 in Malaysia (06 per 100,000 population), while a higher incidence rate was estimated at 6.88 and 6.7 per 100,000 population in Kuwait and Australia, respectively compared to the lower incidence rate per 100,000 population in China (0.2 in females, 0.12 in males).

Multiple sclerosis (MS) is considered to be the most prevalent neurological disorder, which primarily affects the central nervous system in young adults (1). MS has wide-ranging effects and is the leading cause of disability among adults and young working-age population; consequently, MS decreases the quality of life of the patients (2). Ample evidence suggests that the prevalence of MS has increased worldwide (3, 4), with the number of the patients rising from 2.1 million in 2008 to 2.3 million in 2013 (4). In 2016, statistics indicated the number of MS patients to be 2,221,188 worldwide, which corresponded to the prevalence rate of 30.1 per 100 000 population (95% CI: 27.5 - 33.0) (2). Furthermore, the prevalence of MS increased from 1970 to 2015 in the Middle East and north Africa (MENA region). In 2016, the lowest and highest prevalence of MS in Eastern Mediterranean countries was reported in Somalia (2.66 per 100,000) and Iran (72.11 per 100,000), respectively (5).

Asia has an outstanding geographical, ethnic, and cultural diversity, and more than half of the world's population inhabits this region (6). Although Asia was considered as a low-risk zone for MS in the past, the epidemiological status of MS in Asia has changed in recent decades (7). Several studies addressing the epidemiology of MS have been performed in North America and Europe, providing significant insight into MS epidemiology, such as the increasing prevalence and incidence of the disease (8).

Limited epidemiological studies have been conducted in Asia, Australia, and New Zealand in this regard. As such, we have performed a systematic review of the studies on the incidence and prevalence of MS in Asia, Australia, and New Zealand. According to a systematic review by the authors of the present study, the highest prevalence of MS was reported in Japan (East Asia; 16.2 in 2011), Turkey (Middle East; 101.4 in 2003) (3, 9), and New Zealand (15 in 2001) per 100,000 population (10).

To determine the updated epidemiology of MS in Asian countries, Australia, and New Zealand, a systematic literature search was performed in Medline and Embase databases, which allowed access to the publications available to Tehran University of Medical Sciences during January 1, 2015-September 1, 2018. In addition, various keywords were used to facilitate the search process, including epidemiology, multiple sclerosis, prevalence, incidence, and names of target countries (similar to our previous systematic reviews) (3, 9).

Computer databases were utilized to identify the population-based studies containing the epidemiological data of MS, and we only selected the articles published in English language. Cross-sectional and cohort studies were included in the review, and the potentially relevant titles and abstracts of the documented studies by the databases were reviewed as well.

This comprehensive systematic review was planned in advance, and the full text of the initially eligible studies were reviewed based on the eligibility criteria, as follows: (1) studies addressing human MS patients living in Asian countries, Australia, and New Zealand; (2) studies containing data on the prevalence, incidence, and number of the MS cases in the target countries; (3) studies regarding the diagnosis of MS patients based on the McDonald MS diagnostic criteria (11); (4) studies not limited to a specific gender or age groups; and (5) studies available in the full-text form. Two experts reviewed the abstracts of the identified articles, and only the studies confirmed by both reviewers based on the eligibility criteria were selected for the systematic review. 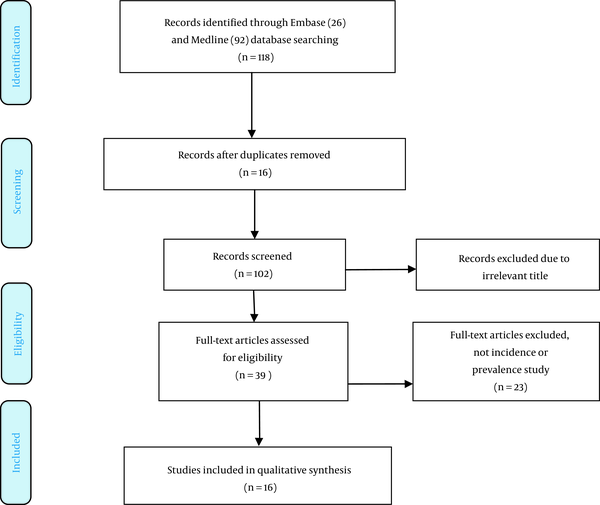 The collected data addressing different countries in the specified categories of regions were evaluated based on our previous systematic reviews (3, 9). In addition, the abstracts of the selected articles were screened by two expert reviewers to ensure that the initially selected articles met the eligibility criteria. If the eligibility of the selected abstracts was not initially confirmed, a full-text review would be performed.

Both reviewers approved the quality of the selected articles for the extraction of pertinent data using a data extraction form. The following criteria considered in the decision-making regarding the eligibility of the studies: (1) date of study conduction; (2) study setting; (3) diagnostic criteria; (4) number of identified cases; (5) gender ratio (female-to-male); (6) mean age at disease onset; (7) prevalence per 100,000 population; (8) incidence per 100,000 population; and (9) quality score of each study. Duplicate publications and the studies not adhering to the mentioned criteria were excluded. The extracted data were meticulously investigated by the third reviewer.

The methodological quality of the reviewed and modified studies was also confirmed using the checklist of strengthening the reporting of observational studies in epidemiology (STROBE) (13). Given the growing number of epidemiological evidence, more specific, organized, and updated research is required on the subject.

The thorough database search resulted in 118 citations (including 16 duplications) in the original sources. After screening 102 titles and abstracts, 39 studies were considered to be relevant to the epidemiological studies of MS in the selected countries and eligible for full-text screening. After performing full-text reviews, 16 articles that met the eligibility criteria were selected for data extraction and analysis of the incidence and prevalence of MS (Figure 1).

Tables 1 and 2 shows the data extracted from the selected articles, including the name of the first author, conduction of the study, study setting, sample size, female-to-male ratio, mean age at disease onset, and prevalence and incidence rates per 100,000 population. The main data source to obtain the characteristics of the MS patients in 38% of the studies was the national/regional MS registries. Furthermore, 37% and 25% of the data reported in the studies were obtained from a multicenter hospital setting and a single hospital setting, respectively.

With respect to the gender ratio, it must be considered that the large number of MS cases affected this ratio. The results of the studies regarding the female-to-male ratio in East Asia varied from 3.57:1 in Japan to 2:1 in China (Table 1). In Southeast Asia and South Asia, the gender ratio has been reported to be 5.1:1 in Malaysia and 1.5:1 in India, respectively. Furthermore, the findings regarding the gender ratio in the Middle East indicated the value of 3.03:1 in Iran and 1.77:1 in the United Arab Emirates (Table 2). To summarize, it could be stated that the female-to-male gender ratio varied from the maximum of 5:1 in Malaysia (Table 1) to the minimum of 1.5:1 in Turkey in different studies conducted in Asia (Table 2). Overall, the female-to-male ratio of 2.61:1 could be estimated in the MS patients in Asia based on the reviewed data of the studies in this regard.

Our study aimed to present the inclusive surge and a systematic review of 16 epidemiological studies of MS in Asia. Most of the countries in the examined regions published no epidemiological data on MS during 2015 - 2018. Based on the existing data, the epidemiology of MS has changed in recent decades, and the incidence and prevalence of the disease have increased significantly in Asia (3, 9). Furthermore, the systematic review data indicated a significant increase in the risk of MS globally (14, 30).

Evidence in this regard has several limitations, which could influence the mean age at MS onset, gender ratio, and MS prevalence and incidence rates. Countrywide epidemiological studies are rare, and the only reports among Asian countries are from Kuwait. Moreover, the indeterminate quality of the presented data, small sample size of the studies, and differences in the publication methods (31) were among the other limitations of the reviewed studies. Another limitation is that only a few studies have estimated the incidence rate compared to the prevalence rate of MS per 100,000 population.

Compared to men, women are often at a higher risk of autoimmune diseases. However, the increased female-to-male ratio in MS incidence could be attributed to environmental risk factors and the modern lifestyle mostly favored by women, especially in recent decades. Hormonal, social, and nutritional factors leading to vitamin D deficiency should also be taken into account in this regard (23, 34).

The prevalence and incidence rates of diseases are considered to be essential concepts in epidemiological studies. Several studies conducted in different countries have shown a significant increase in the incidence and prevalence of MS in recent decades as observed in the reported data of Japan, China, Korea, Hong Kong, Taiwan, Malaysia, Iran, Kuwait, and the United Arab Emirates (3, 9).

The rising trend of MS prevalence and incidence might reveal the influence of modified diagnostic criteria, improved medical care and treatment outcomes, and extended survival (29). The possible reasons for the growing incidence and prevalence of MS might be genetic and environmental risk factors, as well as awareness and information about MS, which have been promoted in recent decades (22). Notably, Asians have different ethnicities, environments, lifestyles, and genetic compositions, which could be considered as the influential factors in the difference in the prevalence and incidence rates of MS between various countries (39).

The present study provided an updated systematic review of the epidemiological characteristics of MS in Asia and Australia. According to the results, the incidence and prevalence of MS have not been well-documented in most of the countries in Asia, while epidemiological evidence suggests the increasing prevalence of MS in many countries of this continent. Therefore, further epidemiological studies are required to shed light on MS epidemiology. Furthermore, population-based registries and using standardized, uniform data collection methods and outcome metrics could improve the quality and comparability of such studies and increase our knowledge of global and regional MS epidemiology.

Copyright © 2021, Journal of Kermanshah University of Medical Sciences. This is an open-access article distributed under the terms of the Creative Commons Attribution-NonCommercial 4.0 International License (http://creativecommons.org/licenses/by-nc/4.0/) which permits copy and redistribute the material just in noncommercial usages, provided the original work is properly cited.
download pdf 141.97 KB Download Supplementary Material Get Permission (article level) Import into EndNote Import into BibTex
Number of Comments: 0