The Prevalence and Pattern of Enterobacter Antibiotic Resistance in the Patients Admitted to Imam Reza Hospital in Kermanshah, Iran (2016 - 2018) 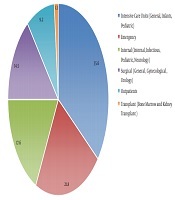 Antibiotic resistance is spreading worldwide against the Gram-negative bacteria that cause nosocomial infections.

The present study aimed to determine the antibiotic resistance pattern of Enterobacter isolated from the blood, urine, wound, and sputum samples of the patients referring to Imam Reza Hospital in Kermanshah, Iran.

This descriptive, cross-sectional study was conducted on 649 patients with positive Enterobacter cultures at Imam Reza Hospital during 2016 - 2018. The isolates were obtained using laboratory tests based on the CLSI protocol. In addition, the standard disc-diffusion method was used to assess antibiotic susceptibility. Data analysis was performed in SPSS version 20.

Most cases of positive Enterobacteriaceae were isolated from the patients admitted to the intensive care unit (35.6%) and emergency ward (21.9%), as well as the urine (51.6%) and sputum samples (20.5%), respectively. Levofloxacin, ciprofloxacin, and imipenem were the most effective antibiotics against Enterobacter with the susceptibility of 56.7%, 54.8%, and 53.3%, respectively.

According to the results, the antibiotic resistance of Enterobacter to ampicillin and ceftriaxone was high, and these antibiotics must be used correctly and reasonably. Furthermore, more epidemiological studies are required in Iran to provide national programs for preventing the spread of antibiotic resistance.

Members of the Enterobacteriaceae family are ubiquitous in nature and exist in animals (especially mammals), the human gastrointestinal tract, and contaminated food products and vegetables. These bacteria are considered important mostly due to the large number of the patients they infect, so that 5% - 10% of hospitalizations, 30% - 40% of septicemia cases, and more than 70% of urinary tract infections (UTIs) have been attributed to this family of bacteria (1). Several factors are taken into account in determining the pathogenicity of Enterobacteriaceae family members, such as colonization, binding, toxin production, and tissue invasion. In addition, some plasmid families in Enterobacteriaceae could cause antibiotic resistance (2). On the other hand, Enterobacter, which is among the normal intestinal flora, is regarded as a significant pathogen involved in various infections, such as pneumonia, UTI, wound infections, and bacteremia, and particularly hospital infections (3, 4).

Enterobacter species (especially E. cloacae) are among the main pathogens involved in hospital infections, which are also referred to as opportunistic infections (OIs). The foremost predisposing factors for infections include diabetes, neutropenia, malignancy, and long-term hospitalization, especially in the patients receiving antibiotics, invasive surgeries, and central venous catheters (5, 6). The hospital outbreaks of E. cloacae infection have been reported in various hospital wards, particularly intensive care units (ICUs), pediatric wards, and neonatal wards (3, 7). Antibiotic resistance in bacterial pathogens is a severe threat to humans, affecting numerous patients worldwide. In addition, the alteration of microbial flora by antibiotics leads to the invasion of OI bacteria and fungi, and the rapid formation and spread of Gram-negative bacteria with multidrug resistance have also emerged as a grave healthcare concern (1, 8, 9).

Enterobacteriaceae species are the leading causes of nosocomial infections (NIs) with a growing prevalence, and the infections caused by Enterobacteriaceae with antibiotic resistance have been associated with higher mortality, longer hospitalization, and higher treatment costs compared to the infections caused by other sensitive strains (3, 6). β-lactam antibiotics are the most commonly prescribed agents for the treatment of the infections caused by Enterobacteriaceae species. This antibiotic group includes penicillin derivatives such as cephalosporins, monobactams, and carbapenems (10). According to the literature, the most important emerging resistance in Enterobacteriaceae is resistance to broad-spectrum β-lactam antibiotics, which is mostly attributed to the production of β-lactam inhibitors (3). A minimum of two days is required to report susceptibility and resistance to antimicrobial agents, and the experimental treatment often initiates before a definitive report in this period. Therefore, it is essential to expand research on the antibiotic resistance patterns of various pathogens and perform epidemiological studies to contribute to the experimental treatment of infections. In fact, the World Health Organization (WHO) has prioritized research in this area (11, 12). Notably, resistance patterns change in every location over time, which necessitates regular research update (12).

Given the increasing prevalence of isolated Enterobacteriaceae in Imam Reza Hospital during 2016 - 2018, the present study aimed to determine the susceptibility and antibiotic resistance patterns of this organism to help select the optimal antibiotic. Another objective of the research was to avoid prescribing ineffective antibiotics for this important pathogen.

In this descriptive, cross-sectional study, we initially prepared a list of the cases with positive Enterobacter cultures (blood, urine, wound, pleural fluid, and cerebrospinal fluid) during 2016 - 2018 at Imam Reza Hospital based on the data provided by the laboratory specialist of the hospital. Afterwards, the susceptibility and antimicrobial resistance patterns of the isolated Enterobacteriaceae in each patient were determined, based on which the samples were cultured in eosin methylene blue medium and blood agar and incubated at the temperature of 37°C for 24 hours at the microbiology laboratory.

Following the colony growth and early identification of the organism, the bacterium was identified based on the colony morphology, presence/absence of hemolysis, and the Gram-stained smear prepared from the colonies. At the next stage, the diameter of the growth zone in the antibiogram was measured using the disc-diffusion method in millimeters. In addition, the ratio of the growth zone diameter to various antibiotics was assessed using the Mueller Hinton agar medium and compared with the standards of the Clinical and Laboratory Standard Institute (CLSI); the antibiotics included ciprofloxacin (5 µg), ceftazidime (30 µg), cotrimoxazole (1.25 µg), ceftriaxone (30 µg), cefepime (30 µg), gentamicin (10 µg), imipenem (10 µg), ampicillin (10 µg), ampicillin sulbactam (10 µg), piperacillin (100 µg), nitrofurantoin (300 µg), nalidixic acid (30 µg), levofloxacin (5 µg), and amikacin (30 µg).

The bacterial suspension was prepared to match 0.5 McFarland turbidity standard (1.5 × 108 CFU/mL), followed by three replications of the lawn culture by streaking the entire agar surface of the plate with a sterile swab. In the next phase, the antibiotic discs were placed in a culture medium and incubated at the temperature of 37°C for 24 hours. To read the results, the diameter of the inhibition zone was measured in millimeters using a metric ruler, and the results were reported based on susceptibility (S) and resistance (R), and the intermediate (I) zones were recorded as well. Notably, we fully complied with ethical considerations and maintained information confidentiality.

In total, 644 positive cases of Enterobacter were reported in the patients admitted to Imam Reza Hospital during 2016 - 2018, respectively. Among 649 patients, 54.7% were male, and the others were female with the mean age of 45.06 years.

In terms of the reported Enterobacteriaceae, E. aerogenes and E. cloacae were detected in 64.4% and 35.6% of the cases, respectively. Among the positive culture samples, 51.6% belonged to the urinary samples, while 20.5%, 11.9%, 7.2%, 4.2%, and 0.2% were among the sputum, blood, eye, excretion, and wound, tissue, and vaginal biopsy samples, respectively. Figure 1 shows the positive cases of Enterobacteriaceae in each hospital ward, and Figure 2 illustrates the antibiogram. 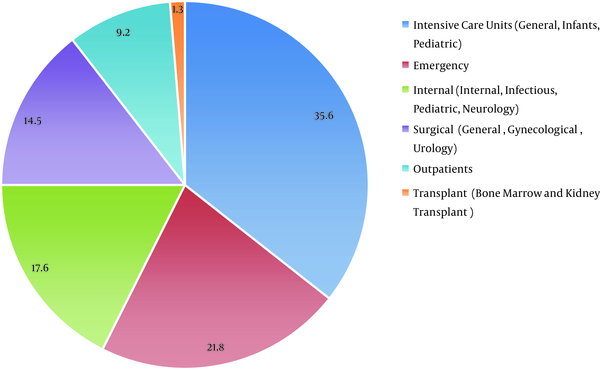 According to the obtained results, levofloxacin, ciprofloxacin, and imipenem were the most effective antibiotics against the infections caused by Enterobacter with the susceptibility of 56.7%, 54.8%, and 53.3%, respectively. In addition, the highest Enterobacter antibiotic resistance rate was observed against ampicillin and ampicillin-sulbactam.

Among 649 patients with positive Enterobacter culture admitted to Imam Reza Hospital during 2016 - 2018, 54.7% were male, and the others were female (45.3%). In another study performed in China during 2015 - 2018, 62% of the patients were male (13). In addition, Ebrahimzadeh Shiraz et al. (1) conducted a study in Shiraz (Iran) to evaluate carbapenem resistance in Pseudomonas aeruginosa and Enterobacteriaceae isolated from clinical samples. In the mentioned study, 62% of the subjects were male, and the obtained results indicated the higher referral of men compared to women.

In terms of the hospital ward, most cases of positive Enterobacter were isolated from ICUs (ICU, NICU, and PICU; 35.6%) and the emergency ward (21.9%), while the transplant ward (bone marrow and kidney; 1.3%) and outpatients (9.2%) accounted for the least frequent samples. According to the WHO, NIs are most prevalent in ICUs. In a research conducted by Ghanbari et al. (14) in Isfahan (Iran), the highest rate of NIs was reported in the internal medicine ward (35.66%) and ICUs (30.6%). According to Razin et al. (15), UTI was the most prevalent infection, and ICUs were the most contaminated hospital sections in Morocco. The risk of infection increases with the presence of Enterobacter in adult food and infant formula (16-19), high susceptibility, and the poor immune function of the patients admitted to ICUs. Another cause of increased NIs in emergency wards is the presence of a large number of patients with special conditions. On the other hand, the lowest rate of Enterobacterial infections in the transplant and outpatient sections in the current research could be due to isolation in the former and short hospitalization in the latter.

The infections caused by E. cloacae species, which are resistant to third-generation cephalosporins, are a great health concern since these resistant strains are spreading sporadically (3). In the current research, high resistance was observed to cephalosporins, which was estimated at 65%, 51.5%, and 51.4%, compared to ceftriaxone, cefepime, and ceftazidime, respectively. In a research conducted in Shiraz (2015), susceptibility to ceftazidime, cefepime, and imipenem was reported to be 47.8%, 62.2%, and 95.6%, respectively. In addition, the isolates in the mentioned study responded relatively well to antibiotics such as quinolones (ciprofloxacin). In a study by Nematolahi et al. (3), Enterobacter resistance to amikacin was reported to be 30%, while the rate was estimated at 22.8% in the present study. Furthermore, Shokri et al. (22) investigated the resistance of E. coli to carbapenem in 300 clinical samples in Isfahan (Iran), and E. coli and Enterobacter showed 3.3% and 8.9% resistance to carbapenem, respectively. In the present study, 32.5% of Enterobacter antibiotic resistance to imipenem showed a recent increase. In the United States, Enterobacter infections are among the most common carbapenem-resistant infections, contributing to the spread of antibiotic-resistant infections (23, 24).

Overall, the comparison of the data obtained from various studies in this regard was rather complicated in the current research due to some limitations. One of the issues was the lack of a mutual standard method to assess the susceptibility of the bacteria, and another challenge was the technical differences between studies. In addition, comparison was difficult due to the accurate placement of intermediate strains in the classifications used in research (25).

The great variability in antibiotic resistance could be justified by the use of different antibiotics for disease treatment in various regions. According to the results, resistance to ampicillin and ceftriaxone has increased in the treatment of the infections caused by the Enterobacteriaceae family in Iran. This is probably due to antibiotic misuse and the use of antibiotics without medical prescription. Therefore, it is recommended that special attention be paid to issues such as microscopic examination and urine/blood culture, as well as the appropriate prescription of antibiotics based on culture and antibiogram, conducting similar research at different periods and in different regions to clarify the epidemiology of NIs, and determining the resistance level and susceptibility of microorganisms to various antibiotics.

Hereby, we extend our gratitude to the clinical research development center and staff of Imam Reza Hospital (affiliated to Kermanshah University of Medical Sciences) for assisting us in this research project.