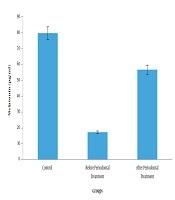 Periodontitis is a chronic inflammatory disease that causes tissue destruction due to the imbalance in the oxidant-antioxidant system. Melatonin has anti-inflammatory, antioxidant, and immune-modulatory properties and is considered to be a biomarker and diagnostic/therapeutic agent in the pathogenesis of periodontitis.

The present study aimed to evaluate the salivary melatonin level and its changes following non-surgical periodontal therapy in patients with periodontitis.

In total, 90 salivary samples were collected from 60 patients, including 30 from patients with moderate chronic periodontitis (before periodontal treatment), and 30 from the same patients one month after the non-surgical periodontal therapy, and 30 from periodontally healthy subjects (control). Salivary melatonin levels were measured using the competitive immunoassay of the human melatonin ELISA kit.

According to the results, salivary melatonin levels improved after non-surgical periodontal therapy, which suggests the involvement of melatonin in the pathogenesis of periodontitis. However, the exact role of melatonin requires further investigation.

Melatonin (N-acetyl-5-methoxytryptamine) is an endogenous indolamine, which is responsible for the sleep/wake cycle. It is primarily secreted by the pineal gland with a circadian rhythm and a high level of secretion during the night and in darkness (1, 2). Other sources of melatonin secretion in the human body include the retina, gastrointestinal tract, leukocytes, bone marrow, and skin (3). Melatonin is recognized as a multitasking molecule with a wide variety of biological actions, including antioxidant effects (4, 5), anti-inflammatory effects, immunomodulatory properties (6), osteopromotion, bone loss inhibition (7, 8), oncostatic effects (9, 10), and neuroprotective properties (11). This biomarker enhances osteoblast differentiation and bone formation via stimulating type I collagen synthesis. Therefore, it exerts therapeutic effects on various injuries of the oral cavity through scavenging the free radicals produced during inflammation and reducing bone destruction (12). After the secretion of melatonin into the bloodstream, approximately 70% of the plasma melatonin binds to albumin, and 24% - 33% of free melatonin passively diffuses into the mouth through salivary glands. Therefore, melatonin is found in the saliva and crevicular fluid, representing the free fraction of melatonin in the plasma (13, 14).

Periodontitis is a highly prevalent inflammatory disorder worldwide, reported in 20% - 50% of the population. Periodontitis affects tooth-supporting structures, including the periodontal ligament, cementum, and the alveolar bone (15). This inflammatory disease is initiated due to the interactions between the host’s immune system, modifying environmental factors, and subgingival microbiota, particularly gram-negative organisms such as Porphyromonas gingivalis (16, 17). The activation of the immune response neutralizes the bacterial attack, while triggering the periodontal tissue destruction via releasing pro-inflammatory cytokines, prostaglandins, free radicals, and reactive oxygen species (ROS; oxidative damage). Previous studies have suggested that the presence of melatonin (direct scavenger of free radicals) in the saliva might affect the pathogenic process of periodontal diseases (18).

According to Drisko (19), non-surgical periodontal therapy, along with oral hygiene instructions, could help control the subgingival microbial plaque. In addition, the imbalance of the oxidant-antioxidant system due to the production of free radicals by bacteria and the host’s immune response during periodontitis could lead to oxidative damage to the periodontal tissue (20). Several studies have implied that salivary melatonin levels significantly decrease in patients with periodontal diseases, indicating that this biomarker could be used as a diagnostic and a potential therapeutic agent for periodontitis. Melatonin levels may change due to factors such as smoking, alcohol consumption, and aging, while no such effect has been attributed to gender (13). Melatonin is a direct scavenger of free radicals and promotes the anti-oxidative enzymes in the saliva, thereby indirectly affecting the pathogenesis of periodontal diseases (21).

The present study aimed to investigate salivary melatonin level before and after non-surgical periodontal therapies to determine the treatment efficiency.

This case-control study was conducted to measure melatonin level before and after non-surgical periodontal therapies and treatment efficiency. Sample size was calculated based on the study by Lodhi et al. (22). In total, 60 participants (30 patients with moderate chronic periodontitis and 30 healthy controls) were recruited from the patients referring to the Periodontal Department of Babol University of Medical Sciences, Iran. The participants were informed about the study procedures and provided informed consent. The Ethics Committee of approved the research protocol in December 2017.

The inclusion criteria were as follows:

The exclusion criteria were as follows:

Using antioxidant or melatonin supplement therapies/medications (e.g., aspirin, diazepam) that modify the melatonin level within the past three months;

History of periodontal treatment within the past six months;

The participants were enquired about their medical and dental history, followed by the careful examination of the periodontal status using a standard periodontal probe (UNC-15, Hu-Fridey Instruments, Chicago, IL, USA). Each subject was motivated to observe oral hygiene and plaque control. clinical examinations and non-surgical periodontal therapy (scaling and root planing) were carried out by one periodontist. Measurements were obtained at four sites per teeth, including mesiofacial, buccal, distofacial, and lingual. The diagnostic criteria for moderate chronic periodontitis were as follows: Probing depth (≥ 5 and < 7 mm), clinical attachment loss (CAL) of 3 - 4 millimeters, and presence of bleeding on probing (23). The healthy subjects were confirmed by Leo and Silness gingival index (no CAL).

In total, 90 saliva samples were collected, including 30 samples from the patients with moderate chronic periodontitis (pre-treatment), 30 samples from the same patients one month after scaling and root planing, and 30 samples from periodontally healthy subjects. Sample collection was performed at 9:00 AM - 12:00 AM. The participants were asked not to chew gum, eat or drink (except water) after waking. In addition, unstimulated saliva samples were harvested by the spitting method into sterile polypropylene tubes and sent to the Biochemistry Department of Babol University of Medical Sciences. The subjects were seated with their head bowed slightly forward for sample collection. Afterwards, one milliliter of saliva was centrifuged at 3,500 rpm for eight minutes to remove debris and preserved at the temperature of 4°C until evaluation.

The melatonin level of the saliva samples was measured using a competitive immunoassay. The kit uses the enzyme-linked immunosorbent assay (ELISA) technique based on the double-antibody sandwich technology to measure melatonin. In this study, melatonin was added to the wells, which were pre-coated with melatonin monoclonal antibody, and incubated. Afterwards, anti-melatonin antibodies labeled with biotin were added to the unit with streptavidin-HRP, forming an immune complex. The unbound enzymes were removed after incubation and washing. Following that, A and B substrates were added, and the solution turned blue and changed to yellow due to the acid effect. The shades of the solution and concentration of human melatonin were positively correlated.

The operators in the Biochemistry Department and the data analyst were blinded from the beginning of the study to the completion of statistical analysis.

Data analysis was performed in SPSS (Statistical Package for the Social Sciences V.24, Chicago, IL, USA) at the test power of 80% and significance level of 5% for the analysis of variance (ANOVA) and 1% for Tukey’s post-hoc test. Data were expressed as mean and standard deviation (SD). Continuous parameters were compared using paired t-test and one-way ANOVA, and categorical data were expressed as numbers and percentages. In addition, Tukey’s post-hoc test was used to compare the three study groups (healthy controls, before treatment, after treatment). 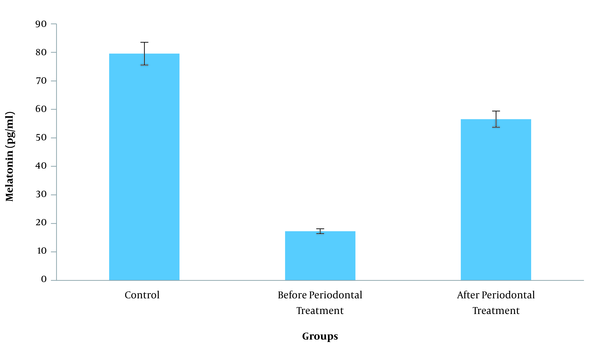 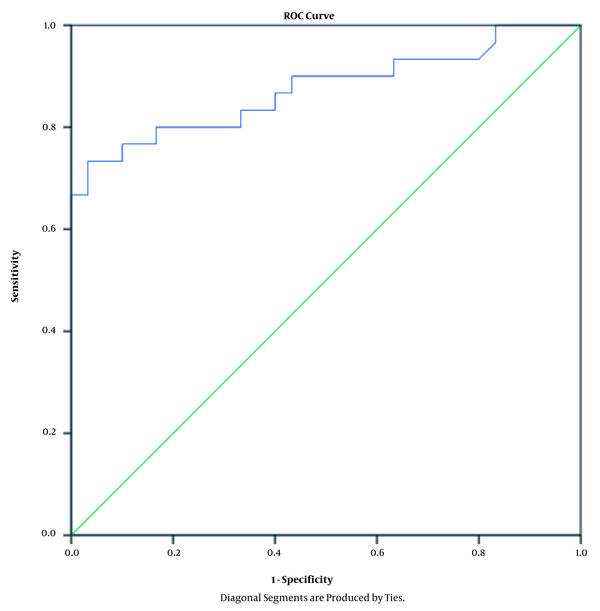 Table 3. Correlations Between Groups (Before and After Periodontal Treatment) and Saliva Melatonina

The present study indicated the increased level of salivary melatonin in the patients with periodontitis following the non-surgical periodontal therapy. Periodontitis is a chronic inflammatory disease, which destroys the tooth-supporting tissue due to the interaction between the subgingival flora and the host’s immune system. This is initiated by the release of pro-inflammatory cytokines, free radicals, and ROS (17, 18). Melatonin could exhibit antioxidant, anti-inflammatory, and bone-preserving properties, thereby playing a pivotal role in periodontal diseases (24). Several studies have reported that salivary melatonin decreases in patients with periodontitis, which was confirmed in the present study (20, 25). Therefore, it could be concluded that the reduction of salivary melatonin could be a potential indicator of periodontitis.

Following the successful non-surgical periodontal therapy in the current research, the mean salivary melatonin levels significantly increased by approximately 32.36 units. In a study in this regard, Baydas et al. (26) explained this phenomenon based on the theory of the destructive effects of periodontal inflammation on salivary glands, which causes a reduction in melatonin secretion. Our findings are consistent with the study by Bertl et al. (20), who reported a 25% increase in melatonin after a non-surgical periodontal therapy. Therefore, improved salivary melatonin could rebalance the oxidant/antioxidant system and reduce local inflammation in the oral cavity. According to the study by Balaji et al. (25), salivary glands produce melatonin as an extrapineal site of melatonin biosynthesis. On the other hand, melatonin 1 receptors in the buccal mucosa may exert receptor-mediated effects (27).

Melatonin secretion follows a circadian rhythm, with the maximal secretion occurring at 12:00 AM - 2:00 AM (3). In the current research, the samples were collected at 9:00 AM - 12:00 AM to achieve viable results, and sample collection was performed at the same time before and after the therapy to avoid the impact of the biorhythm on the melatonin level of the subjects.

According to the results of the present study, the healthy subjects had the highest melatonin level. After the periodontal treatment, the salivary melatonin level was observed to improve as well, which confirms the local involvement of melatonin and its immune-modulating effects. The usefulness of melatonin as a biomarker of periodontal disease was also confirmed by the sensitivity and specificity analysis using the ROC curve in our research. Correspondingly, the area under the curve (0.87) indicated an excellent performance. Furthermore, the ROC curve was used to assess the correlation between melatonin and the periodontal therapy.

Our findings demonstrated that melatonin changed with 80% sensitivity and 80% specificity from the pretreatment to the post-treatment stage. As a result, we decided to introduce a potentially significant cutoff for this association. Considering the ROC curve analysis and linear logistic regression, we established the sensitive cutoff of 23.75 from the pretreatment to the post-treatment stage in the periodontal patients. Melatonin could control the immune response of the periodontal tissue during local inflammation due to bacterial invasion (29). Therefore, it could be employed as an adjuvant therapy in the treatment of periodontal diseases (30-32). Further investigations are required to determine the effective dose of melatonin and its potential side-effects on the human body.

Copyright © 2021, Journal of Kermanshah University of Medical Sciences. This is an open-access article distributed under the terms of the Creative Commons Attribution-NonCommercial 4.0 International License (http://creativecommons.org/licenses/by-nc/4.0/) which permits copy and redistribute the material just in noncommercial usages, provided the original work is properly cited.
download pdf 429.58 KB Get Permission (article level) Import into EndNote Import into BibTex
Number of Comments: 0