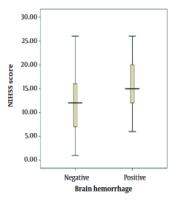 Stroke is one of the most common causes of disability. Based on reports, recombinant tissue plasminogen activator (rtPA) remains the only drug approved for the treatment of ischemic stroke and reduction of associated disabilities. One of the most common complications of this treatment is intracerebral hemorrhage (ICH), which can lead to mortality and aggravate initial symptoms.

The present study aimed to evaluate the prevalence of hemogenic factors and the most important complication inhibiting the receiving of treatment (i.e., ICH).

In total, 300 patients treated with rtPA, ICH was measured by using a CT scan, and the hemorrhage level was determined. Moreover, data analysis was performed in SPSS to compare the two groups in terms of demographic, clinical, and paraclinical findings, including age, gender, blood glucose level, the NIHSS score, early CT scores, history of diabetes, myocardial infarction and stroke, hypertension, aspirin use, and smoking status.

The prevalence of cerebral hemorrhage was 11.7% with 7.6% symptomatic ICH.

One of the most common causes of mortality and disability, ischemic stroke leads to long-term hospitalization and other issues such as nosocomial infections, deep vein thrombosis (DVT), and bedsores. In some cases, the syndrome results in long-term hospitalization in the intensive care unit (ICU) and the need for respiratory resuscitation and other care. In the long run, these patients will need frequent clinical follow-up and physiotherapy. In 2005, ischemic stroke was recognized as the cause of 15% of deaths worldwide (1, 2). Studies show that 70 - 80% of deaths after stroke occur due to ischemic brain lesions (3, 4). Clinically speaking, ischemic stroke can be associated with different types of defects such as changes in the level of consciousness, physical disorders, motor, cognitive, perceptual, and linguistic function, pain, and psychological issues such as depression with a prevalence of 14.1 - 19.3%, which reduce the speed of recovery and might even lead to suicide (5). A stroke is characterized as a neurological deficit of sudden onset, with symptoms lasting more than 24 hours, and is a reflection of the local involvement of the central nervous system as a result of an abrupt interruption of constant blood flow to the brain. In general, there are two potential therapeutic strategies for the disease, including reperfusion and neuroprotection (6, 7).

However, the most appropriate treatment for ischemic stroke is the use of an intravenous recombinant tissue plasminogen activator (rtPA). Tissue plasminogen activator is a protein lysing enzyme with the corresponding gene on chromosome 8 in P12, which catalyzes the conversion of plasminogen to plasmin. This property is due to its ability to break down fibrin-containing clots, such as those in thrombotic lesions of the cerebral arteries. In a study, promising results were achieved even from injection 3 - 4.5 hours after the onset of stroke following excluding people over 80 and severe cases of stroke. Ideally, more than 40% of stroke patients should receive rtPA (8). Usually, those around the patient are the first to notice their disability, and these symptoms appear in less than a few hours. The mentioned treatment can be useful in case of timely referral. Symptoms will alleviate in one in four people within three-six months, and the person’s function will return to pre-stroke condition. Performing the treatment in a timely manner and administration restrictions of the technique should be taken into account (9). Similar to any other type of treatment, this method is associated with complications despite its benefits, which are sometimes deadlier than the disease itself. However, these problems can be avoided by a more efficient selection of candidate patients for medication. In this regard, a number of factors are scored based on identified criteria, and the candidate patients are selected based on the final score. In fact, each of these factors has a different level of relationship with the hemorrhagic complication occurrence (10, 11).

The present study aimed to determine the prevalence of hemorrhagic complications and factors related to their emergence. This will help select candidate patients for the medication with more care. With this background in mind, the current research attempted to reduce the incidence of intracerebral hemorrhage (ICH) following thrombotic therapy by the correct choice of patients.

In total, 300 patients with acute stroke treated with rtPA from 2017 to 2019 in Imam Reza Hospital of Kermanshah, Iran were enrolled. Intracerebral hemorrhage following drug administration (symptomatic and within 24 hours or asymptomatic and after 24 hours) was measured by using a CT scan and based on small petechiae, confluent petechiae, parenchymal hemorrhage type 1, parenchymal hemorrhage type 11, and extraischemic hematoma (EIH). In addition, the hemorrhage level was determined, and data analysis was performed in SPSS to compare the two ICH and non-ICH groups in terms of demographic, clinical, and paraclinical factors, including age, gender, blood glucose level upon admission, the NIHSS score, early CT scores, history of diabetes, myocardial infarction and stroke, hypertension, the time period between onset of symptoms and ICH incidence, aspirin use, and smoking status.

In this study, ICH was detected in 35 out of 300 patients. The mean age of the ICH group was 74 ± 14 years and significantly higher than the non-ICH group (68 ± 14 years) (P = 0.007). In addition, the mean NIHSS score was estimated at 15 ± 5 and 12 ± 5 in the ICH and non-ICH groups, respectively. In this regard, the mentioned score was significantly higher in the ICH group compared to the non-ICH group (P = 0.001). Moreover, no significant difference was observed between the two groups regarding blood glucose level, hypertension, myocardial infarction and stroke, gender, history of diabetes, smoking status, aspirin use, and the time between the onset of symptoms and ICH incidence (Table 1).

In this study, the mean NIHSS score was 15 ± 5 and 12 ± 5 in the ICH and non-ICH groups, respectively. In addition, the minimum and maximum scores were 6 and 26 in the former group and 1 and 26 in the latter group, respectively (Figure 1).

According to the results, there was a significant relationship between patients’ age and NIHSS scores with ICH incidence (P < 0.05). On the other hand, no significant association was found between ICH and blood glucose level, hypertension, and the time period between the onset of symptoms and ICH incidence (P > 0.05).

This was a descriptive-analytical study performed on 300 patients who were potential candidates for rtPA administration. To the best of our knowledge, ICH is the most important complication of the mentioned drug, and its frequency depends on various criteria assessed in the current research. Due to the importance of the subject, similar studies have been conducted to assess this issue. However, this was the first study performed on the current population. In the present study, the ICH incidence rate was estimated at 11.7%. In studies by Renu et al. and Mijderwijk et al., ICH was reported at 8.5% and 4.8%, respectively (12, 13). In other studies, the ICH rate has been reported in the range of 6 - 9%. However, the hemorrhagic complication was higher in the current research, compared to similar studies.

Based on previous studies, other hemogenic factors, such as digestive bleeding and systematic hemorrhage, occur at an incidence rate of 1.7% and 0.3%, respectively, which have not been assessed in similar studies. In the current research, the mean age of the subjects in the ICH group was 74 ± 14 years, and the age range of the participants was 40 - 89 years. In the non-ICH group, the mean age was 68 ± 14 years, and the minimum and maximum age of participants was 30 and 95 years, respectively. Based on our findings, there was a significant relationship between patients’ age and ICH incidence following rtPA administration. In this respect, the higher the score, the higher the incidence of complications (P < 0.05), which is consistent with the results obtained by Tanne et al. and Larrue et al. (14, 15).

In the current research, the mean NIHSS score in the ICH group was 15 ± 5, and the range of NIHSS scores was 6 - 26. In the non-ICH group, the mean NIHSS score was 5 ± 12, and the minimum and maximum scores were 1 and 26, respectively. According to the results of the present study, there was a significant relationship between the mean NIHSS score of patients and the ICH incidence rate following the rtPA administration. In this respect, the higher the score, the higher the possibility of complications (P < 0.05). Consistent with our findings, Mijderwijk et al. (13) reported a relationship only between the NIHSS score and ICH incidence among different variables. Similarly, our findings are congruent with the results obtained by Kidwell et al. (16), Lansberg et al. (17), and Selim et al. (18).

The mean time from onset of symptoms to tpRA administration was 120 minutes with a standard deviation of 62. In addition, ICH occurred at a minimum and maximum time of 20 and 240 minutes, respectively. According to the results, there was no significant relationship between the time between the onset of symptoms and drug administration and ICH (P > 0.05). In this regard, our findings are in accordance with the results obtained by Mijderwijk et al. (13). Meanwhile, the results reported by Kidwell et al. (16) are not consistent with our findings. Notably, the mentioned factor has not been assessed in other studies.

In the current research, we evaluated almost all SEDAN Score factors and Hemorrhage After Thrombolysis (HAT) Score (19), including stroke history, early CT results, diabetes, NIHSS, age, and blood glucose level. The NIHSS score of the factor was significant in most similar studies and consistent with our findings. In addition, we assessed the criteria of hypertension, smoking status, aspirin use, and history of myocardial infarction (the following results are the findings in addition to the main study and hemorrhage grading is not included in the study). We also divided the type of hemorrhagic lesions following the rtPA administration. In this regard, the classifications included small petechiae type 1 (seven cases), confluent petechiae (five cases), parenchymal hemorrhage type 1 (nine cases), parenchymal hemorrhage type 11 (two cases), and extraischemic hematoma (three cases) (20). Therapeutic measures were performed to reserve rtPA-induced coagulopathy in 20 ICH patients. According to the results, 12 ICH cases were symptomatic, whereas 23 cases were asymptomatic.

According to the results of the present study, there was a significant relationship between ICH following rtPA administration and age and NIHSS score of patients and early CT scan results. However, no significant association was found between the compound and variables of blood glucose level, systolic and diastolic blood pressure, the time between the onset of symptoms and drug administration, diabetes, history of ischemic stroke and myocardial infarction, aspirin use, smoking status and the time between the onset of symptoms and referral. In addition, the ICH prevalence following rtPA injection was 7.11%, 7.5% of which was symptomatic.

The authors acknowledge with grateful appreciation the kind assistance and financial support provided by the vice chancellor for research at the Kermanshah university of medical sciences.

Copyright © 2022, Journal of Kermanshah University of Medical Sciences. This is an open-access article distributed under the terms of the Creative Commons Attribution-NonCommercial 4.0 International License (http://creativecommons.org/licenses/by-nc/4.0/) which permits copy and redistribute the material just in noncommercial usages, provided the original work is properly cited.
download pdf 249.43 KB Get Permission (article level) Import into EndNote Import into BibTex
Number of Comments: 0